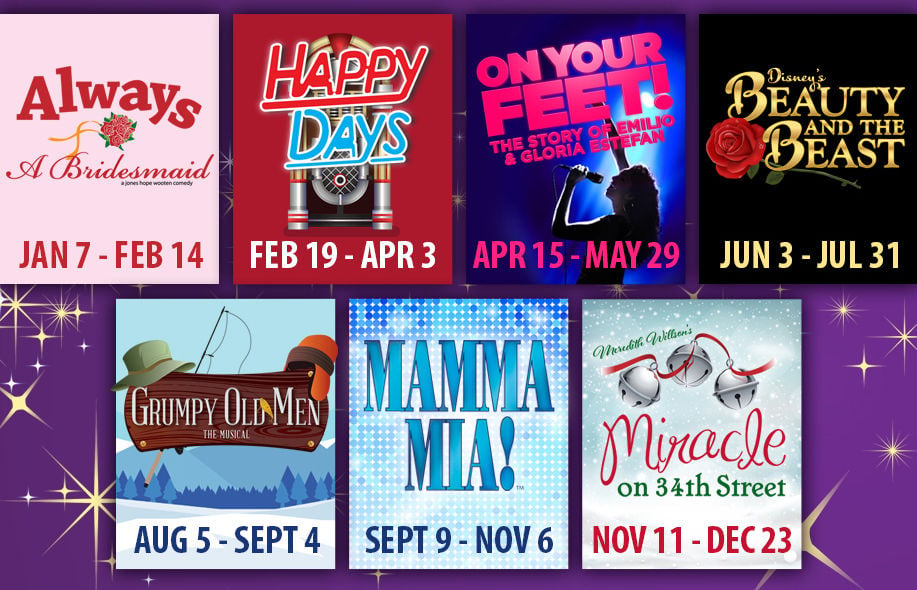 These are the shows of the Dutch Apple Dinner Theatre's 2021 season. 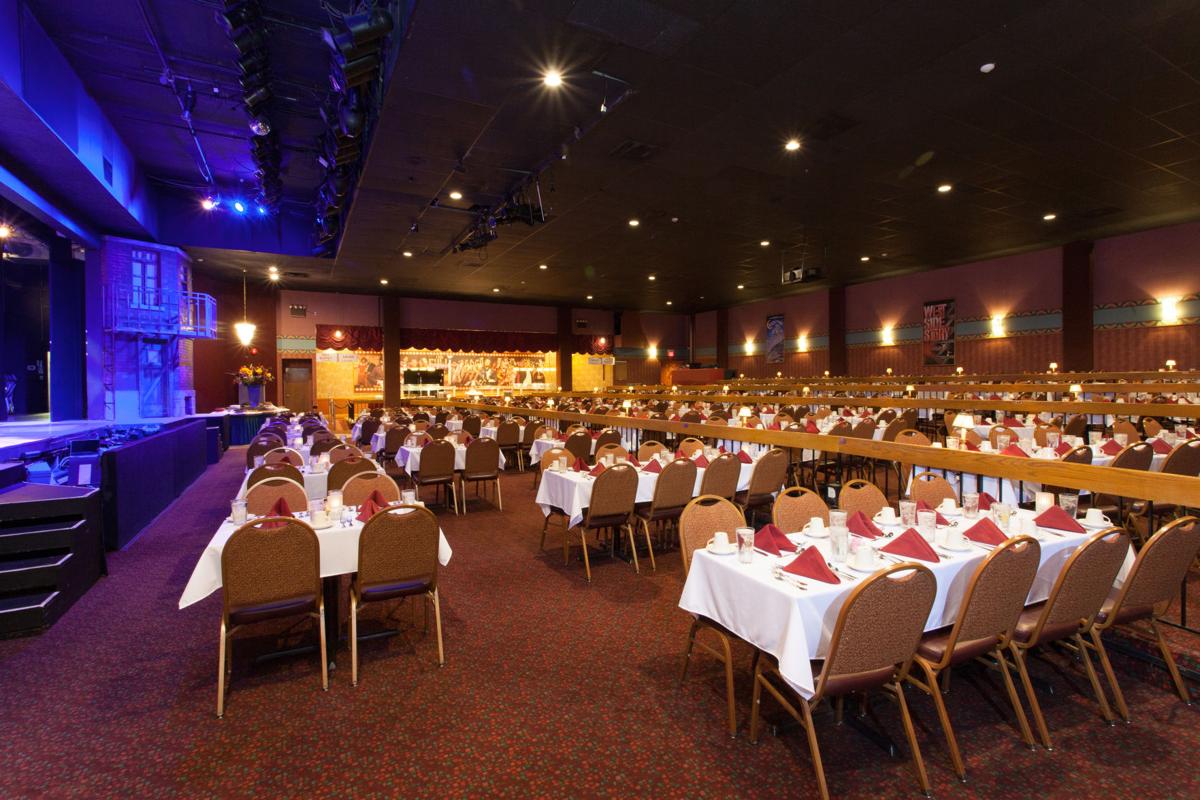 The Dutch Apple Dinner Theatre, shown here when the theater was refurbished in 2016, has the ability to move its seating around in order to keep tables six feet apart, to ensure social distancing. The theater staff is currently putting together a new configuration for the tables, which will be shown on the theater's website when the venue is able to reopen and will decrease overall seating capacity.

The Dutch Apple announced Monday, June 22, that it is reopening Friday, July 17. This information in this story, which was originally posted June 16, has been updated accordingly.

As businesses around the state reopen after the pandemic shutdown, the Dutch Apple Dinner Theatre has an advantage over some other theaters in the area.

The dinner theater's seating consists of dining tables and chairs that can be moved into different configurations.

And they can be moved so as to keep groups of audience members at least six feet apart, for recommended social distancing.

The theater, which shut down in March in the middle of a run of the musical "Grumpy Old Men," announced Monday it will reopen to audiences July 17.

David C. Prather, president of the Dutch Apple, talked about plans for reopening in the wake of the theater's announcing its schedule of shows for its 2021 season.

The theater is reopening now that Gov. Tom Wolf has announced that Lancaster County will move on June 26 into the green phase of Pennsylvania's reopening plan for dealing with COVID-19.

The theater will reopen "with a production of 'Clue: The Musical,' which was a show we did about three years ago for a limited run," Prather says. "That was quite well received. The reason we chose to do that is because it's kind of a smaller-scale show.

"We've actually gone into our theater, and we have set up an entirely new seating area where all the tables are six feet apart from each other, which drastically reduces our seating capacity," Prather says.

Once Lancaster County's in the green phase, gatherings of up to 250 people will be allowed, with social distancing and other restrictions suggested by the Centers for Disease Control and Prevention, Prather notes.

Since the Dutch Apple was refurbished in 2016, it has had a seating capacity of about 328.

The new seating chart, with its reduced capacity, is available for those ordering tickets on the Dutch Apple's website. It shows a capacity of 163 seats, including a handful of show-only seats.

When audiences return, there will be no shared tables in the theater as there have been in the past; each group — families, couples, etc. — will be sitting at its own table, Prather says.

After the run of "Clue," a musical based on the popular family board game, the Dutch Apple will return to its original schedule of fall and winter offerings: the musicals "Saturday Night Fever" from Sept. 17 to Nov. 7 and "Elf the Musical" from Nov. 12 to Jan. 3.

Another change after the theater reopens, Prather says, will be in the "dinner" part of the Dutch Apple Dinner Theatre.

Rather than audience members serving themselves as they have in the past, Prather says, "we will be doing a served buffet. The salad will be plated and brought to your table, and you will then be invited to come up to the buffet, where there will be a buffet attendant who will be handling all the plates and utensils, and will hand you your plate (of food) once you pick your items."

Audience members will also choose from a group of pre-plated desserts.

"Obviously, everyone will be socially distanced, and you'll take a little more time to go through the buffet," Prather says.

"I believe our patrons are going to really enjoy it, because you're going to have a lot of room between the tables," he says.

Dutch Apple staff members — other than the actors on stage — will be wearing masks, Prather says, and following CDC guidelines for cleaning and sanitizing the theater.

Among the safety measures being put into place in the theater because of COVID-19, everyone's temperature will be taken before they come into the theater. Those with a temperature of 100.4 or higher will not be admitted.

"Per state guidelines, all customers must wear a face mask while in the theater, except while dining at their table," the guidelines also say.

Prather says intermission times may have to be extended at some performances, so that the audience can go out to use the lobby restrooms in assigned groups.

Prather says the theater will continue its Thursday night tradition of audience members ordering their meals from a menu and having them brought to their tables by servers.

In addition to the main-stage and children's shows this summer, the theater will also be offering tribute concerts, featuring the music of specific artists and genres. They include"The Magic of Manilow and Streisand," July 25-27, and  "ABBAFab," Aug. 16-17.

"In between 'Clue' and 'Saturday Night Fever,' we have a week of tribute concerts planned, and they are still a go," Prather says. The tribute concerts cover the music of Patsy Cline, Garth Brooks, ABBA, the Carpenters, the Mamas and the Papas, Elvis Presley, The Four Seasons and more.

Also this summer, the theater will be offering its Broadway Bound theater camps for kids.

"The first camps will be virtual, via Zoom," Prather says, "and then later in the summer, we will be doing in-person camps with some of the older age groups," for whom it is easier to help them maintain proper social distance.

During a recent online cabaret, the theater announced its 2021 season.

Main-stage shows in 2021 include the female-centric comedy "Always a Bridesmaid," Jan. 7-Feb. 14; the "Happy Days" musical, Feb. 19-April 3, which Prather says got high scores on audience surveys; "On Your Feet! The Story of Emilio and Gloria Estefan," April 15-May 29; and "Disney's Beauty and the Beast" June 3-July 1.

Prather says the Dutch Apple's production of "On Your Feet!" which opened on Broadway in 2015, will be a regional premiere for the show. He notes Lancaster native Eliseo Roman, who performed at the Dutch Apple before moving to New York, played Gloria Estefan's father in the original Broadway cast of the show.

Because it was selling so well before the theater had to close in March, Prather says, "Grumpy Old Men the Musical" returns Aug. 5-Sept. 4, 2021.

Prather says the Dutch Apple staff has been sharing information with other dinner theaters across the country, through the venue’s membership in the National Dinner Theatre Association.

“This is a learning curve that the entire industry is having to deal with," Prather says.

Because the Dutch Apple hosts many bus tours at its theater performances, Prather says, he hopes the bus tour industry — which must deal with such issues as how many people can safely be on a bus at a time — can also start returning to operations.

He has gotten some positive feedback from the tour companies he's spoken with, he says, but also some "mixed messaging" from others. The tours that had already booked tickets at the dinner theater still plan to come, Prather adds.

“We’re hoping our audience comes back,” Prather says. “Everyone’s been sitting at home, looking at a screen for three months, and I think people are really wanting to get out of the house and interact with something live. “

• The Dutch Apple Dinner Theatre is located at 510 Centerville Road.

• The theater reopens July 17 with "Clue the Musical." Shows Tuesday-Sunday, with matinees and evening performances; tickets $22-$69. Visit the website at dutchapple.com for times and ticket prices.

• Those who already have already bought 2020 show tickets they may not be able to use have the option of exchanging them for a credit for any future Dutch Apple show. Call the box office for details.

• The 2021 main-stage season can be found here: dutchapple.com/our-shows/main-theatre-2021.

• The theater’s website includes information on COVID-19 safety procedures, including those dealing with dining options, at dutchapple.com/covid-19-safety-measures.

1 teen arrested, 3 sought in slaying of woman in Scranton

Trump's `strong wall' to block COVID-19 from China had holes

Update: "The Taming of the Shrew" can be streamed on the People's Shakespeare Project's YouTube channel, not Facebook Live.

On June 26, a changed Celebrate Lancaster will spread food, music and fireworks around the city

There’s a lot to like about working remotely from home during the COVID-19 pandemic, says Kara Kalupson.

The highlight of my sophomore year in high school was performing in our drama club’s production of “Godspell.”