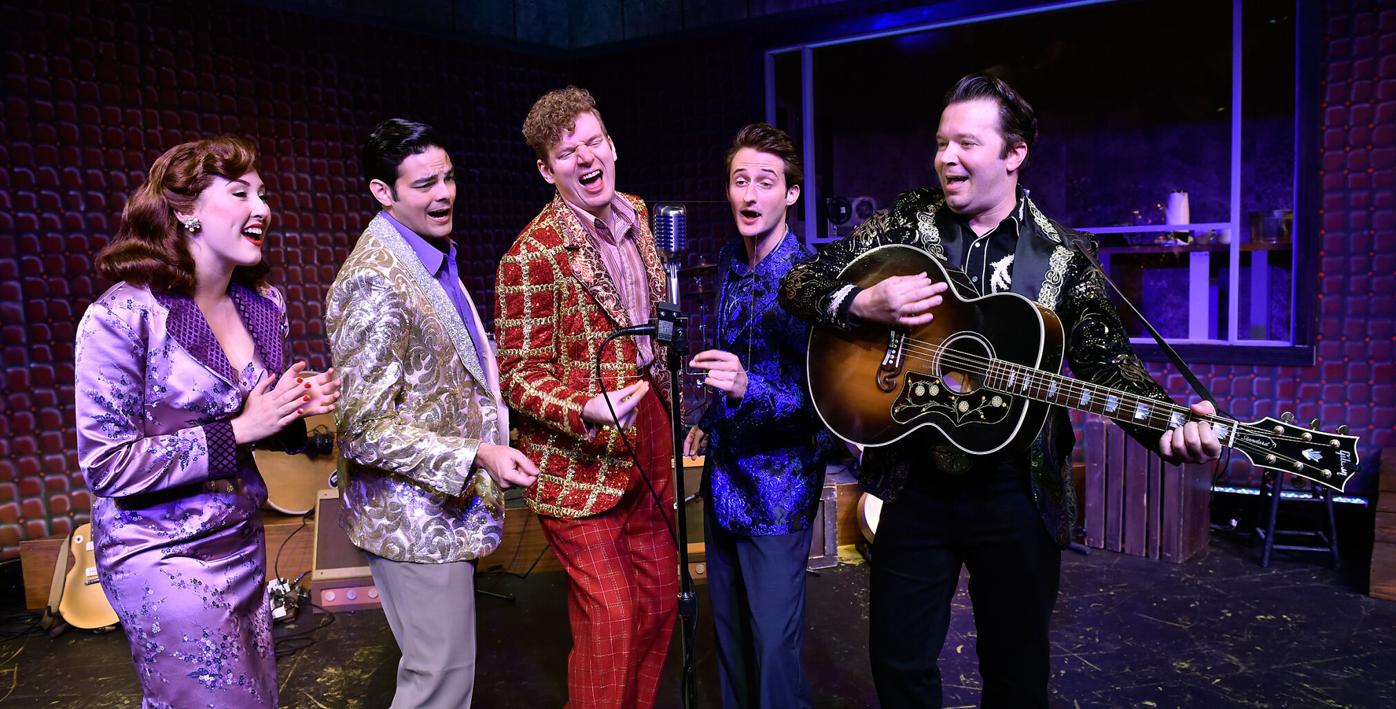 From the left, Taylor Kraft, Jacob Barton, Trevor Dorner, Nathan Burke and Steven Lasiter are members of the cast of "Million Dollar Quartet," about famous rockers meeting one night in 1956 at Sun Records. The show runs through Nov. 7 at the Dutch Apple Dinner Theatre. The cast has been quarantining together, and will be using such COVID-19 safety measures during the show as face shields and Plexiglas shields around microphones. 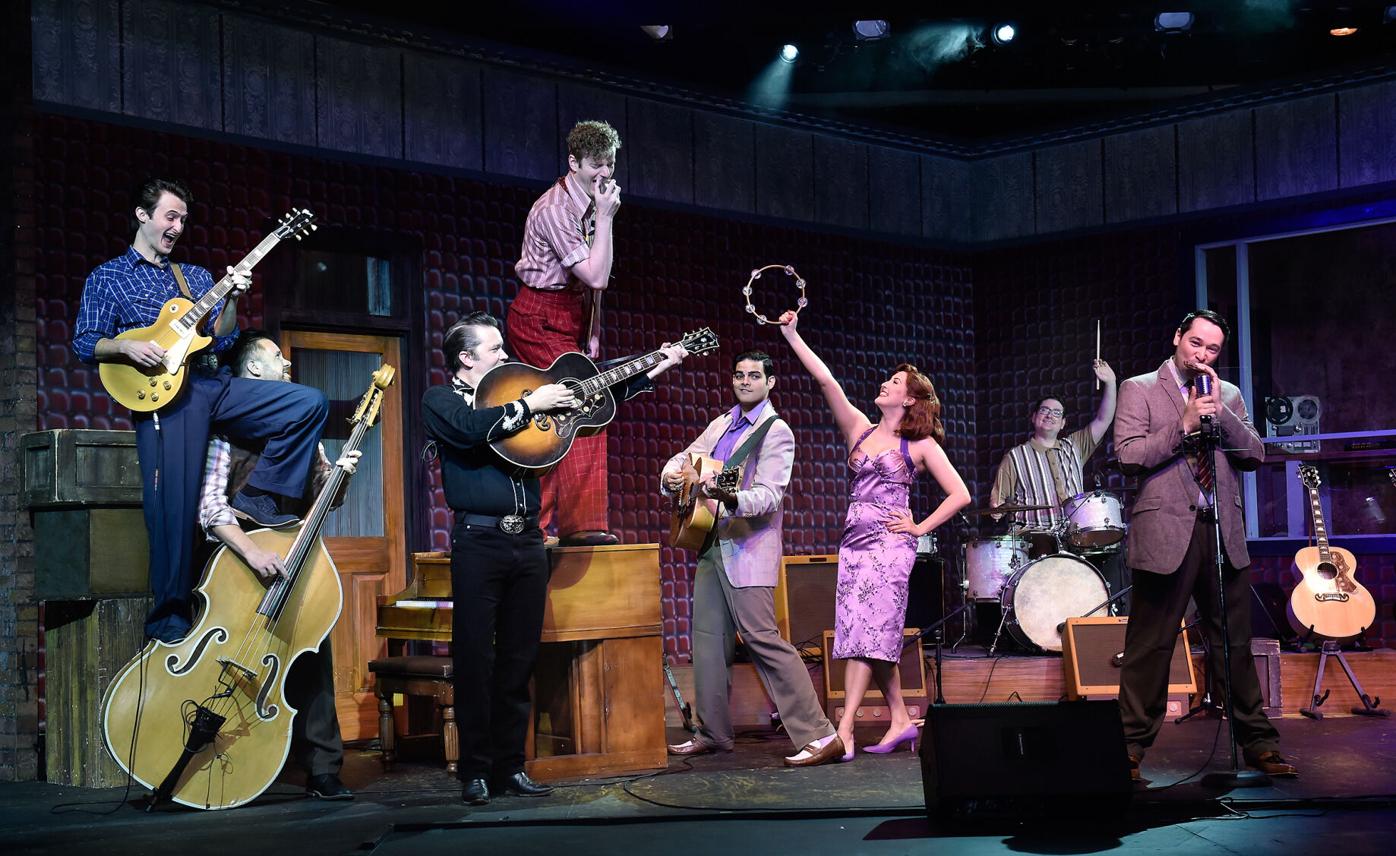 From the left, Nathan Burke, Justin P. Bendel (bass), Steven Lasiter, Trevor Dorner, Jacob Barton, Taylor Kraft, Jon Rossi and Michael Santora are members of the cast of "Million Dollar Quartet," about famous rockers meeting one night in 1956 at Sun Records. The show runs through Nov. 7, at the Dutch Apple Dinner Theatre. The cast has been quarantining together, and will be using such COVID-19 safety measures during the show as face shields and Plexiglas shields around microphones.

There are some very contemporary touches in a Dutch Apple Dinner Theatre musical that seeks to take the audience nearly 65 years back in time.

During “Million Dollar Quartet,” a musical about a 1950s meeting of early rock ’n’ roll icons, actors slip plastic face shields on and off before singing into Plexiglas-backed microphones a few feet apart, and audience members jumping out of their seats to dance near the end of the show are wearing face masks in the dark.

But part of live theater is creating for the audience a world that isn’t really there — sparking viewers’ imaginations to see a whole room in a couple of chairs and a table, or, more recently, a set, costume and props within those boxes filled with faces on a Zoom screen.

And so, despite the shields, distancing and masks put in place to keep performers and viewers safe, the Dutch Apple’s “Million Dollar Quartet” easily transports the audience back to an auto parts store-turned-recording studio in Memphis, Tennessee in the 1956.

It does this, in part, through a talented cast that conjures the personas and the music of early stars Elvis Presley, Carl Perkins, Johnny Cash and Jerry Lee Lewis, in their varied orbits around Sun Records founder Sam Phillips — their musical father.

These stars actually crossed paths on Dec. 4, 1956, in the Memphis, Tennessee, studio, for an impromptu jam session and a now-famous group photo.

Phillips’ expositional dialogue, delivered by actor Michael Santora among such well-known tunes as “Blue Suede Shoes,” “Folsom Prison Blues” and “Whole Lotta Shakin’ Goin’ On,” is not so much the stuff of stage drama as it is a history lesson in the roots of rock ’n’ roll.

The audience gets an education, for example, in how Phillips sought to refine Perkins’ rockabilly sound with Lewis’ piano playing.

Each of the actors playing the musical icons has special skills as a musician.

As Presley, Jacob Barton uses his powerful singing voice to capture the tone of The King’s early recordings at Sun Studio, such as “That’s All Right.”

As Perkins, a great songwriter who never got his due as a performer, Nathan Burke is a whiz on the guitar and a good singer, tearing through “Matchbox” and “Who Do You Love?”

Steve Lasiter captures the distinctive timbre of Cash’s voice well; those low notes are especially impressive on such songs as “Sixteen Tons” and “Ghost Riders in the Sky.”

And as Lewis, Trevor Dorner is a ball of nervous, motor-mouthed energy. Dorner’s also a skilled piano player and singer, whether pounding home Lewis’ signature rat-a-tat accompaniments or running his thumb across the keys in twinkling glissandos.

Taylor Kraft — married to Barton in real life — quizzes the stars about their career dreams as Dyanne, a woman with whom Elvis has a sweet flirtation.

(She’s based on Marilyn Evans, A Presley friend who attended the famed Dec. 4 session).

Elvis and friends are in the building: Couple embraces return to 'Million Dollar Quartet' at Dutch Apple

Kraft has a great singing voice that fills out the ensemble’s nice harmonies throughout the show, and is showcased, solo, on “Fever” and “I Hear You Knockin.’”

Every cast member, including two delivering the fine instrumental backing — bassist Justin Bendel as Carl’s brother, Jay Perkins, and drummer Jon Rossi as W.S. “Fluke” Holland — has performed in regional or touring productions of “Million Dollar Quartet,” and it shows.

The musical is a tight 90 minutes, without intermission, moving seamlessly between dialogue and spirited versions of famous early-rock standards, such as standout ensemble work on “Brown-Eyed Handsome Man.”

A few of the actors’ Southern/country accents come and go a bit during the show.

And the plot is pretty basic: A guessing game as to whether Cash, Carl Perkins and Phillips himself will stay with Sun Records or move on to bigger paychecks isn’t fodder for much drama.

But these are minor quibbles in a musical and a production that’s so purely entertaining.

Those dancing, mask-wearing audience members were clearly able to leave the pandemic and other troubling current events out in the parking lot as these famous songs washed over them on the show’s opening night Thursday.

With tables set six feet apart, temperatures taken at the door, the breezy feel of the recently revamped AC system and reminders for the audience to mask up after dinner, the Dutch Apple makes returning to live, indoor theater a comfortable experience.

And the performers on stage make it an enjoyable, nostalgic and often exciting one.

• When: Runs through Nov. 7. Most performances Wednesday through Sunday, various times, with some Tuesday shows.

• Safety information: Audience members must wear masks in the theater except when dining at their tables; temperatures will be checked before entry. Tables are physically distanced, with reduced seating capacity; buffet is served by staff.

With COVID-19 causing many travel plans to be canceled, including one my husband and I had planned for this summer, I have been reminiscing ab…