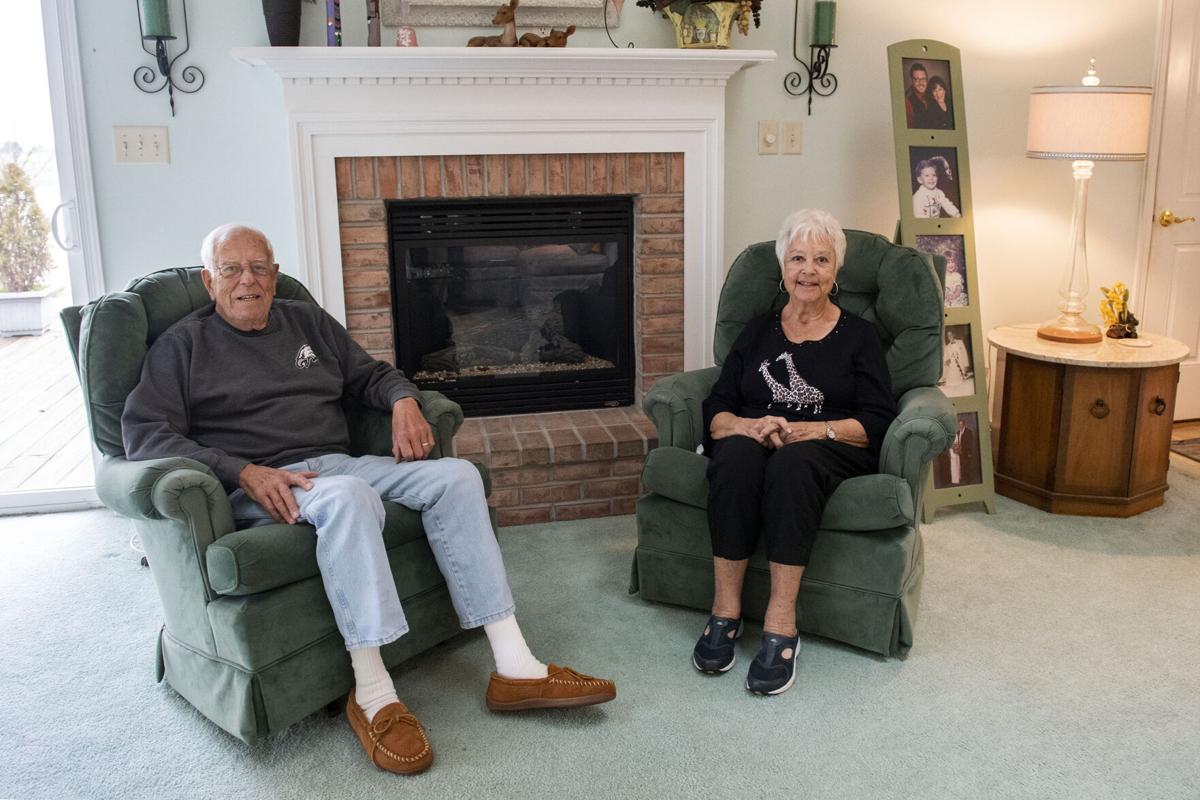 Ed and Donna Sturm sit for a photo in the living room of their Penn Township home on Thursday, Nov. 12, 2020. The couple celebrated their 65th wedding anniversary on Thursday. 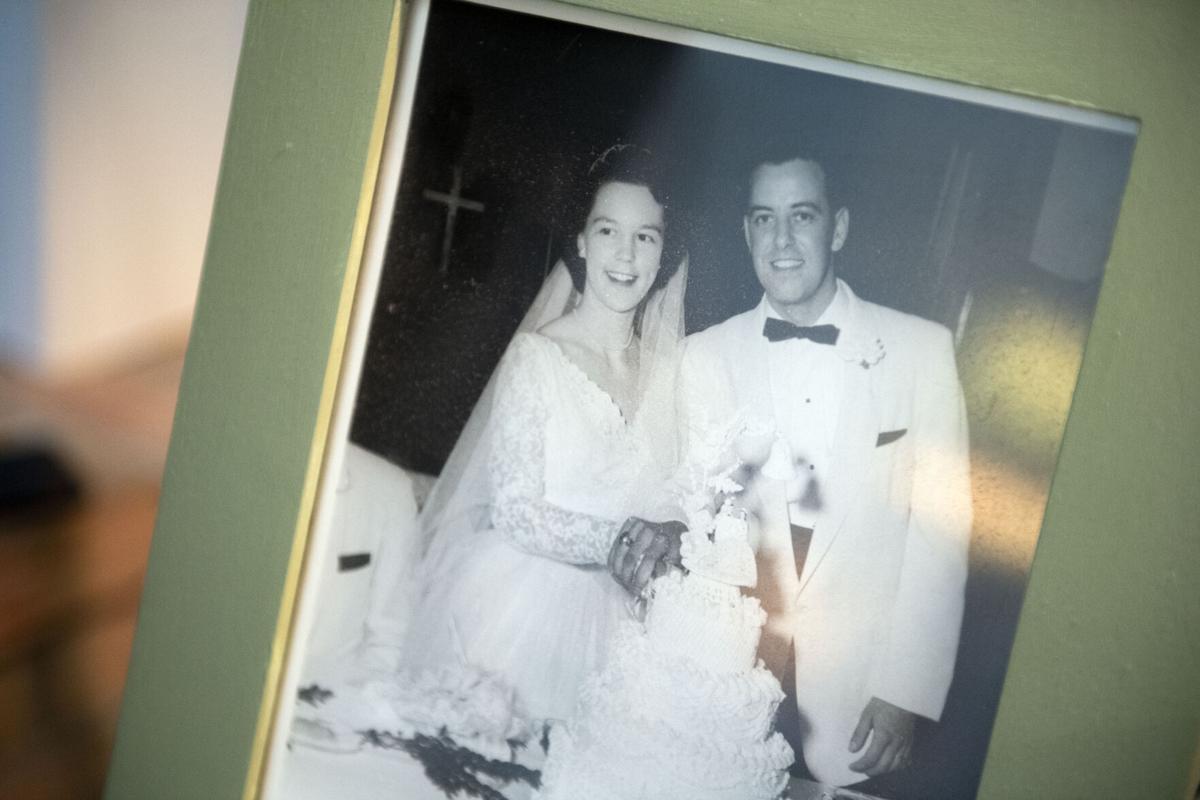 Ed and Donna celebrated their 65th wedding anniversary on Thursday, Nov. 12, 2020. The couple's wedding photo, seen here, was taken in 1955. 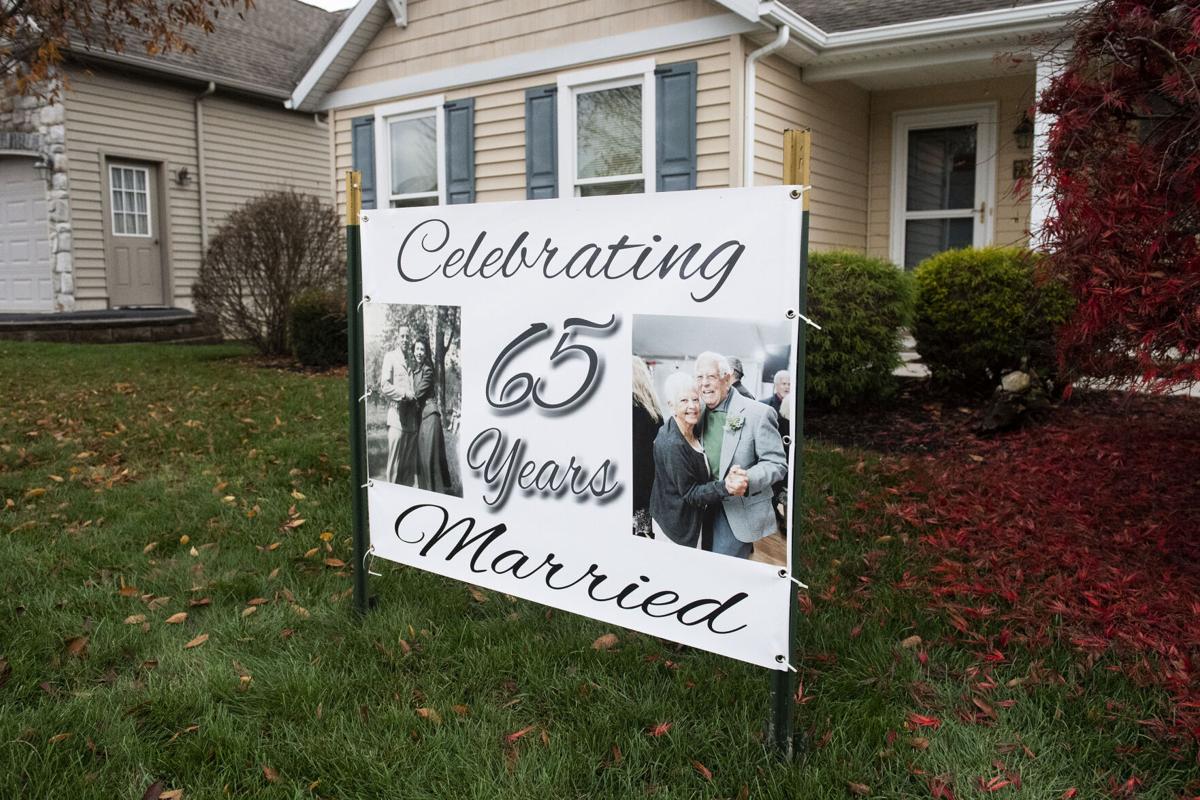 Ed and Donna celebrated their 65th wedding anniversary on Thursday, Nov. 12, 2020. The couple's daughter, Traci, had this sign put up in front of their Penn Township house.

Ed and Donna Sturm first met and started dating in the 1950s.

Donna said that even then she knew he was the love of her life.

But after nine months of courtship, Ed was sent to Germany to serve in the U.S. Army, and  he cut ties with Donna.

She was heartbroken, thinking the relationship was over.

“I thought I’d never see him again. But he was the love of my life,” Donna said last week. “I knew I was very much in love with him."

Fast forward to 1954: Ed was back in the U.S., now a civilian living in Ohio. He hadn’t talked to Donna in more than a year, so he decided to send a letter to her mother to see what was happening in Donna's life.

When he heard she still wasn’t married, Ed went to see her.

Upon opening the door on the afternoon of April 22, 1954, and seeing Ed standing there, Donna said, her heart was relieved.

One month later, on May 22, the two were engaged.

On Thursday, the couple celebrated their 65th wedding anniversary in their Penn Township home. Ed picked up breakfast, and he and Donna enjoyed the meal, highlighting it with mimosas.

Ed, now 90, recalled his decision not to write Donna all those years ago.

“I didn’t know if I was going to come back,” he said, sitting on their couch with his arm around her as he explained his perspective. “You never do when you’re in the service. You don’t know if you’re going to end up in Korea … so I didn’t want to get in a close relationship with her and have that happen.”

But when he came back from overseas, he said, he realized “she was the one I wanted to be with."

The couple still feels that way today, they said. They have three children and three grandchildren together.

Sitting together in their home on Thursday, they recalled some of the funnier, more spontaneous times in the past 65 years.

Donna said she loves Ed’s ability to try new things, like becoming a bass player in a bluegrass band at the age of 75.

“He even had a groupie,” she said, joking that it didn’t bother her.

But she said the No. 1 thing she loves about Ed is his sense of humor.

Their life of love and laughter continued through the current pandemic, as the two spent even more time together, but with fewer things to do.

The couple came up with the “covid challenge,” which is a skills competition that began back in March and continues to this day, with competitions like who can make the best roast beef? (Ed won); or who can plank the longest? (Donna won); and recently, corn husking (Donna also won, despite Ed thinking he had a very fast time).

A good sense of humor, lots of laughter and their faith have all helped their marriage endure so long, Donna said.

The Sturms’ watchwords for married couples hoping to match or beat their streak of marital happiness: communication, humor and respect.

'America is back': Biden pushes past Trump era with nominees

Lancaster mayor airs draft of budget with no new taxes, warns against relying on reserve funds

When the Lancaster Public Library was closed for the first few months of the COVID-19 pandemic, the Wi-Fi was still running.