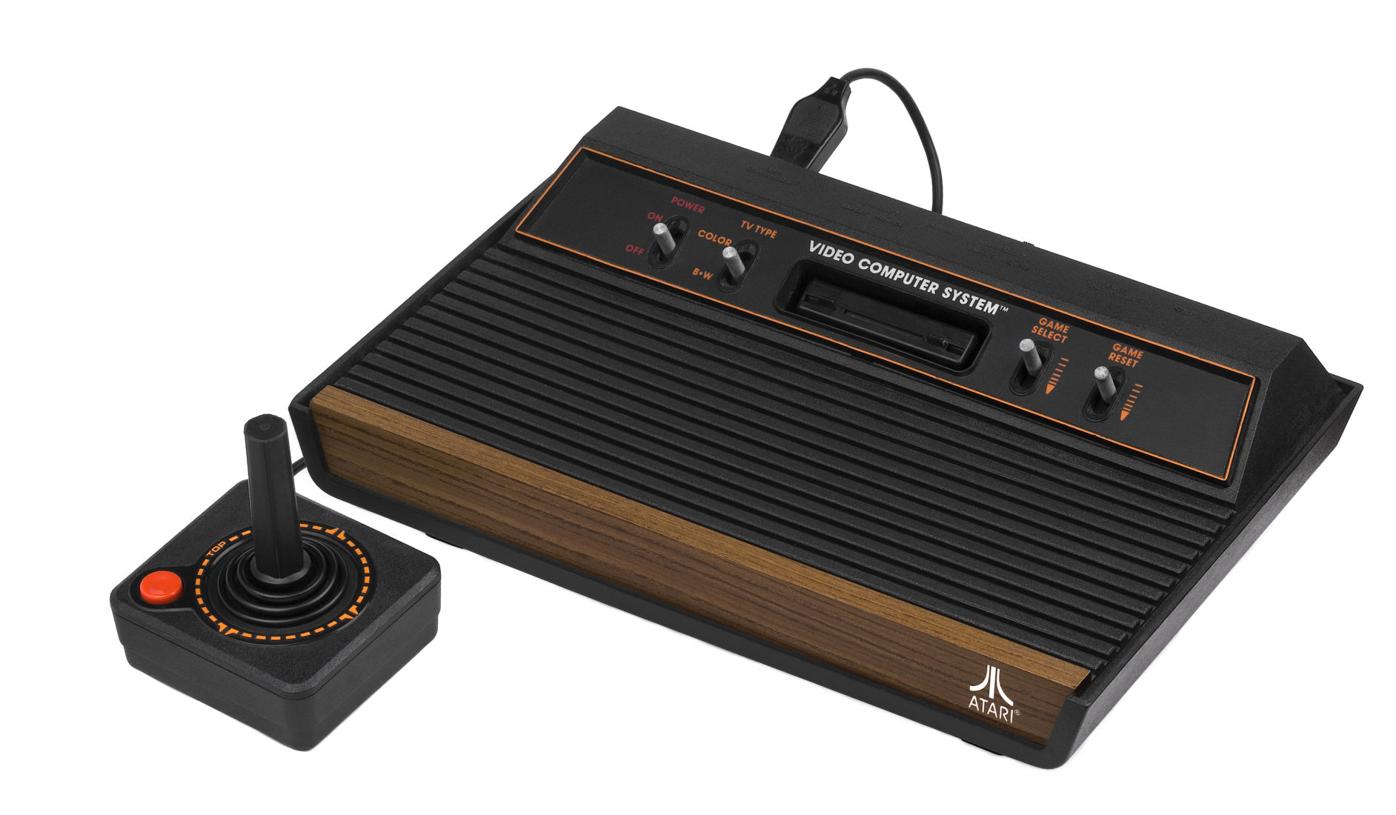 The Atari Video Computer System (VCS) was later and more widely known as the Atari 2600. 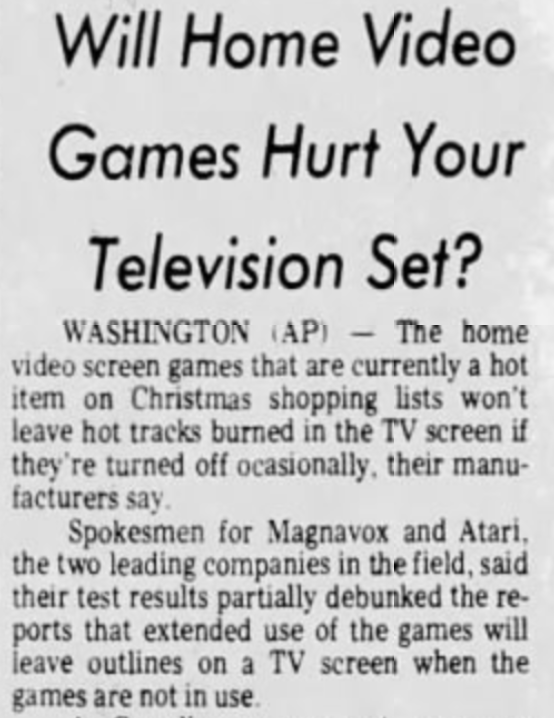 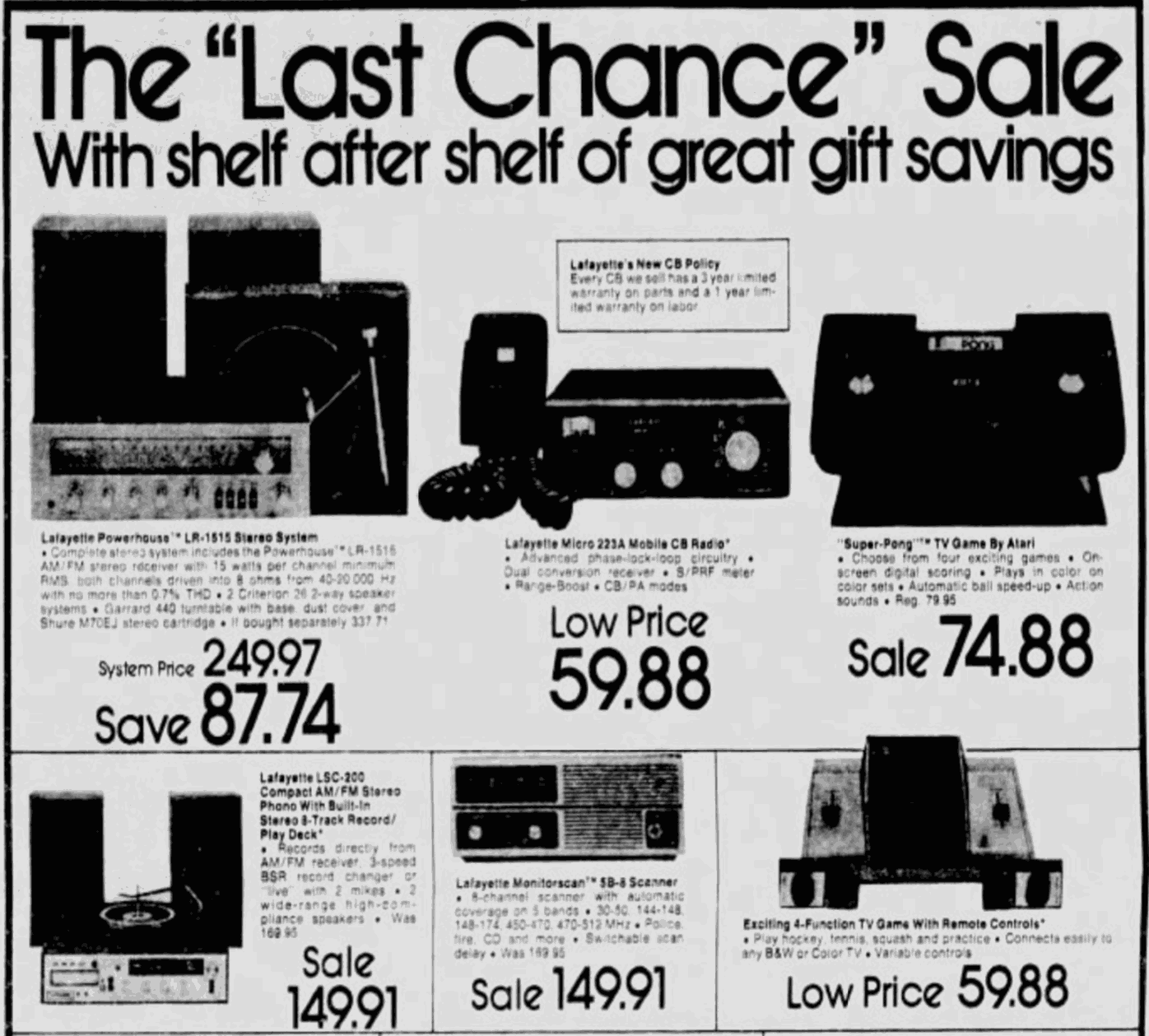 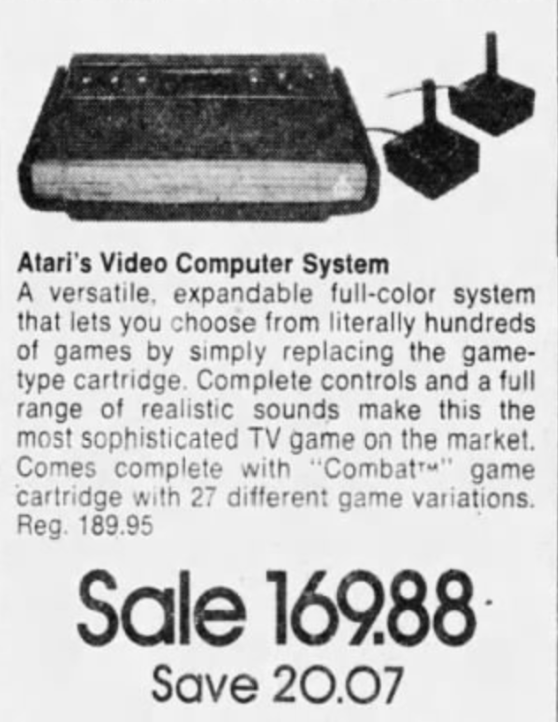 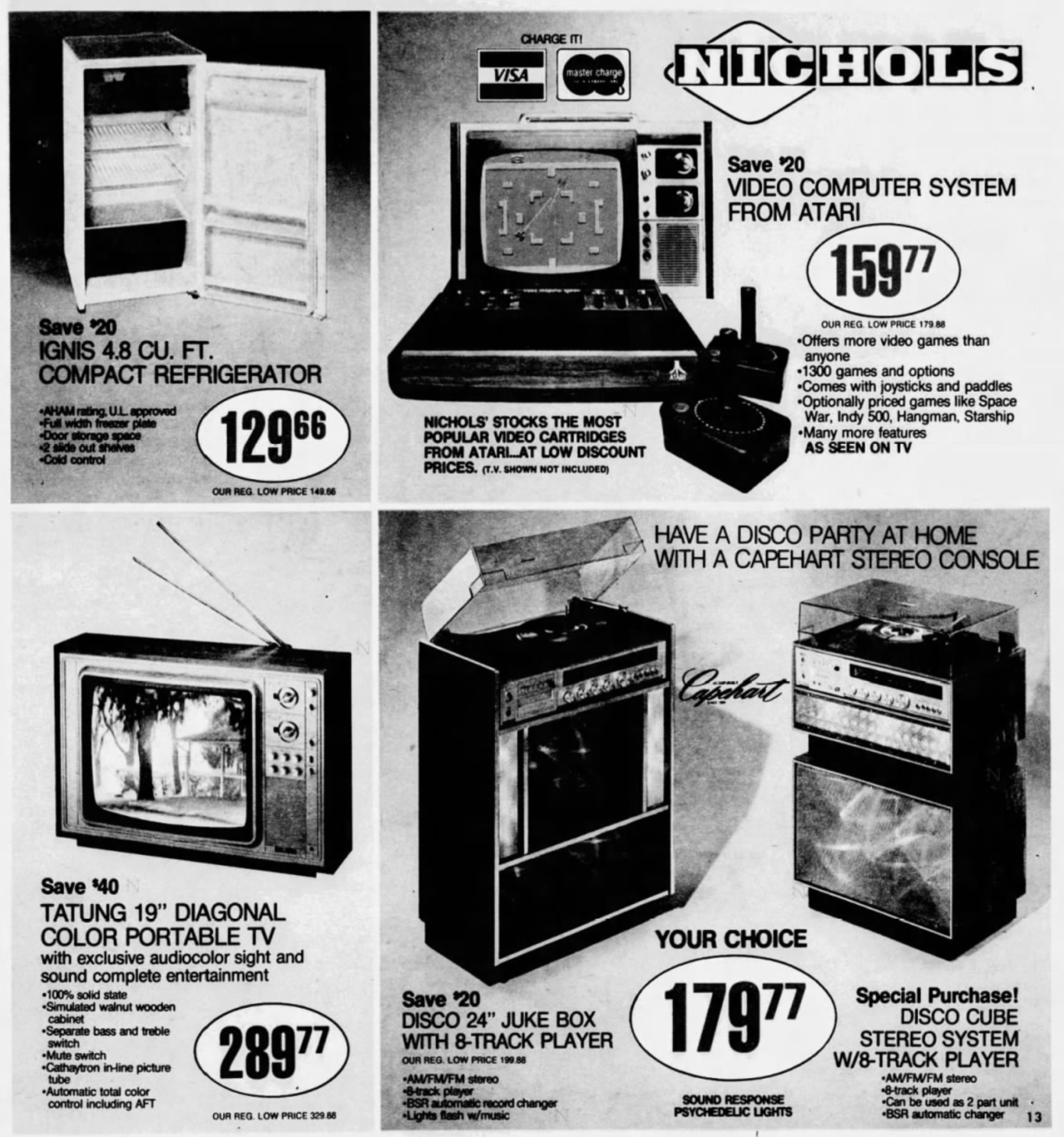 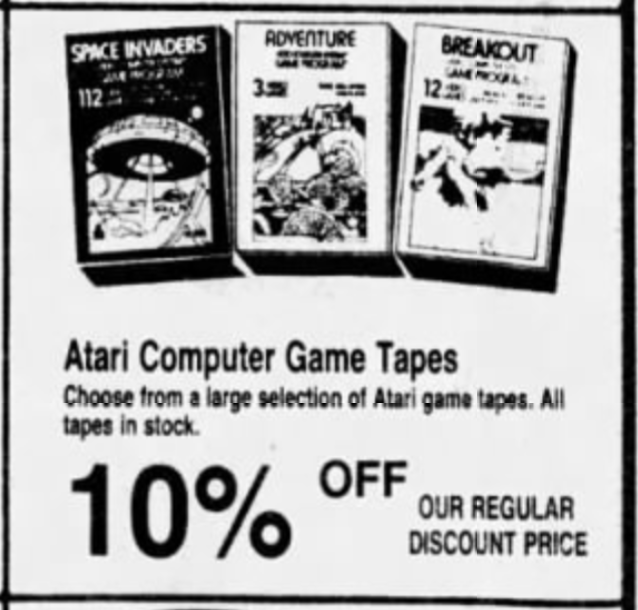 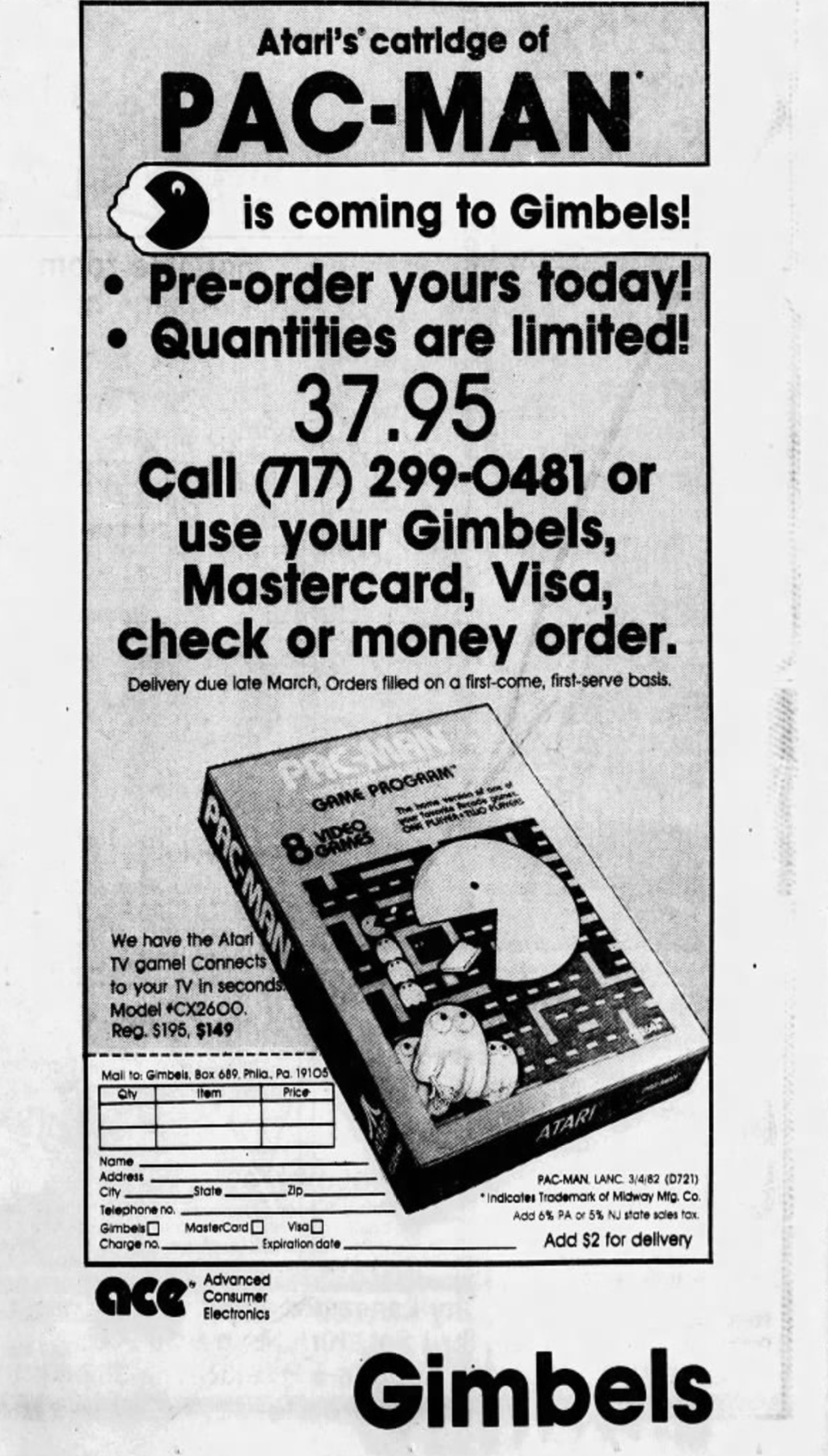 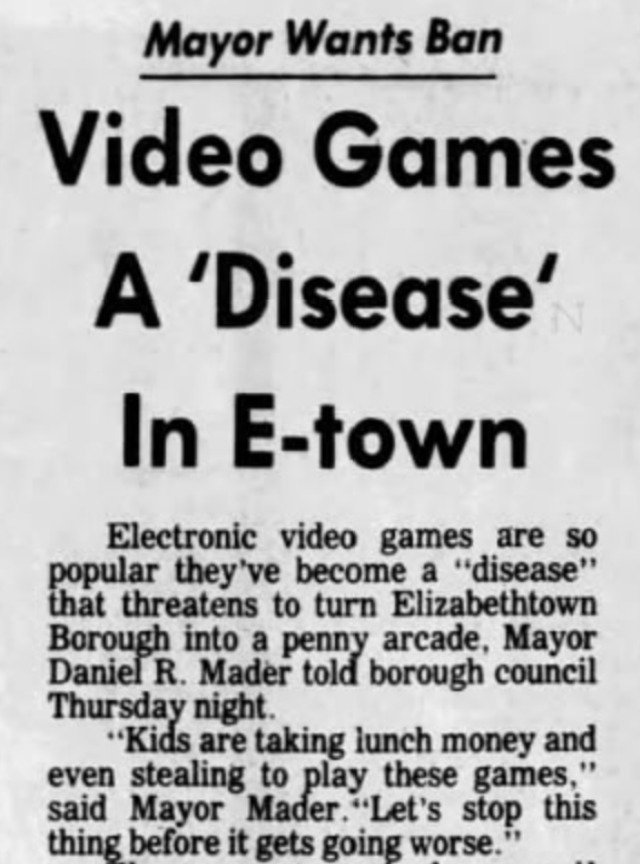 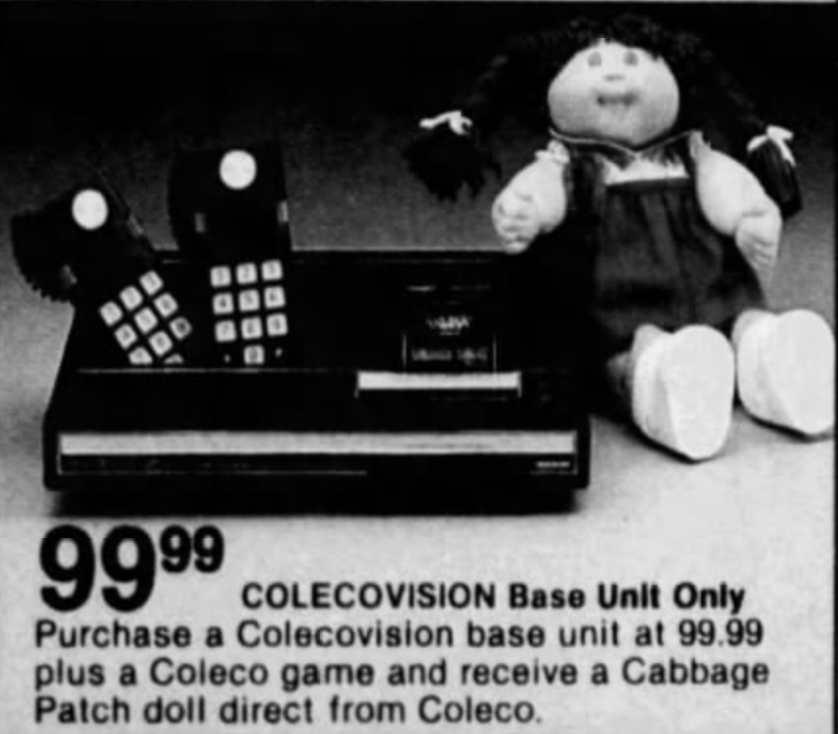 Perhaps someone on your list desperately wants a Nintendo Switch this year. Or maybe you remember your own Christmas lists of decades past -- did you want a PlayStation? A Super Nintendo? A Sega Genesis?

Everything has a beginning, of course, and in between reminiscing about old games, we thought we'd take a look through the LNP | LancasterOnline archives to see what the earliest days of video games looked like in Lancaster newspapers.

One of the earliest references to game consoles in our archives is this short piece appearing on the TV pages in December 1976. By that time, video games had reached the point of being a rising fad, and as they were a completely new concept, many consumers didn't understand them.

"Will home video games hurt your television set?" was the headline, and the answer was simple -- yes, but only if you never turn them off.

This 1976 ad from Lafayette electronics store at Lancaster's Lincoln Plaza shows the beginning of a sea change in consumer electronics trends. The CB radio -- a fad that dominated pop culture in the mid-1970s -- was a centerpiece of holiday electronics ads for several years, but here we see only one CB model represented, along with two different versions of Pong. By the next year, CB radios would disappear from most ads completely - and one of the most popular gaming systems in history would arrive.

At the tail end of the '70s and through the early '80s, the name Atari was essentially synonymous with the idea of home video games, much like the name Nintendo was several years later. Here's one of the first Lancaster County ads for the Atari VCS, later renamed the Atari 2600, from 1977. At a regular price of near $200, the Atari system was an expensive gift -- that works out to more than $800 today.

Only game in town

In 1979 many local stores, including Nichols, were advertising only one video game system -- the Atari 2600. All of the smaller brands and older options had fallen by the wayside. (Side note: Check out those "disco party" stereos, complete with "sound response psychedelic lights" built right in!)

By 1980, the Atari 2600 and its game cartridges had been around for three years. Yet some local retailers, such as The Stereo Post, still clearly didn't understand what they were selling, constantly referring to the games as "tapes." This is also one of the earlier examples of ads focusing on selling the games -- such as the massive hit "Space Invaders" -- instead of the consoles.

It's hard to imagine a more breathless ad than this one from The Stereo Post in 1981. Asteroids was a big deal in video arcades, and the experience of being able to play an arcade game at home was a novel one at the time.

Pre-ordering video games is a common occurrence today, but the earliest reference to it that we could find in our archives was this Gimbels ad for the Atari version of Pac-Man, dating to 1982. Though the anticipation for the home version of Pac-Man was sky-high, the fact that it was vastly inferior to the arcade version soured many shoppers.

While home video games were growing in popularity, arcade games were also booming. And some public officials weren't happy about it. This 1982 article discusses a proposed ban on video games in the borough of Elizabethtown. An alternate suggestion was an ordinance requiring people to be 18 or older in order to play video games.

By Christmas 1984, the first video game craze was all but over. The industry suffered a massive revenue crunch in 1983, and manufacturers and retailers were left trying to unload stock at ultra-low prices. Atari games that sold for $40 two years earlier were on sale for $3. Manufacturer rebates of $10 were being offered on games on sale for $10 - making them effectively free.

And in this ad, perhaps the greatest sales lure of its era, Coleco was offering a free Cabbage Patch Kid doll with the purchase of any ColecoVision system. Given that the Cabbage Patch craze of the previous year was still somewhat strong, this was a pretty compelling deal.

Despite the fact that the media trumpeted the end of the video game fad, the industry came roaring back just a few years later, with the original Nintendo system leading the charge.