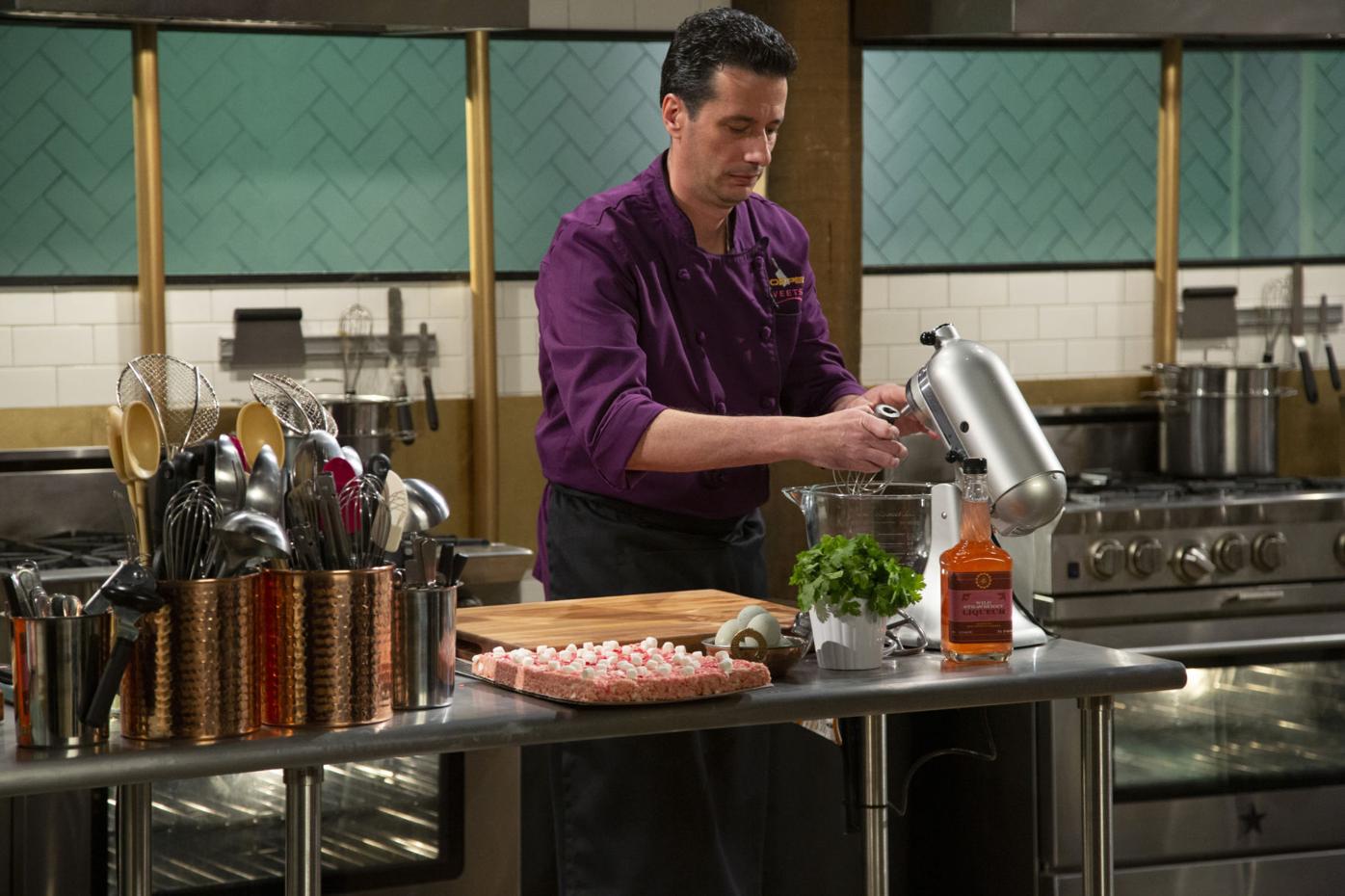 Contestant Cedric Barberet of Lancaster competes on the Food Network's "Chopped Sweets," in an episode that aired Monday night, April 20. 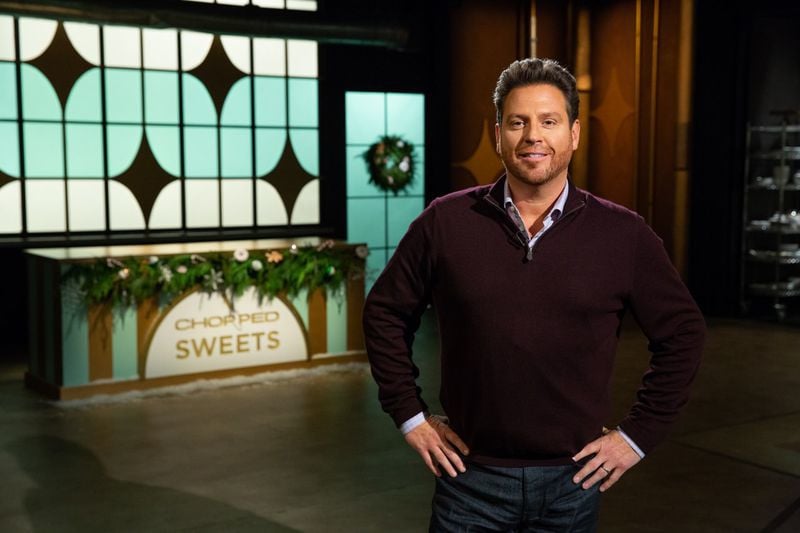 Celebrity chef and restaurateur Scott Conant is the host of "Chopped Sweets" on the Food Network. 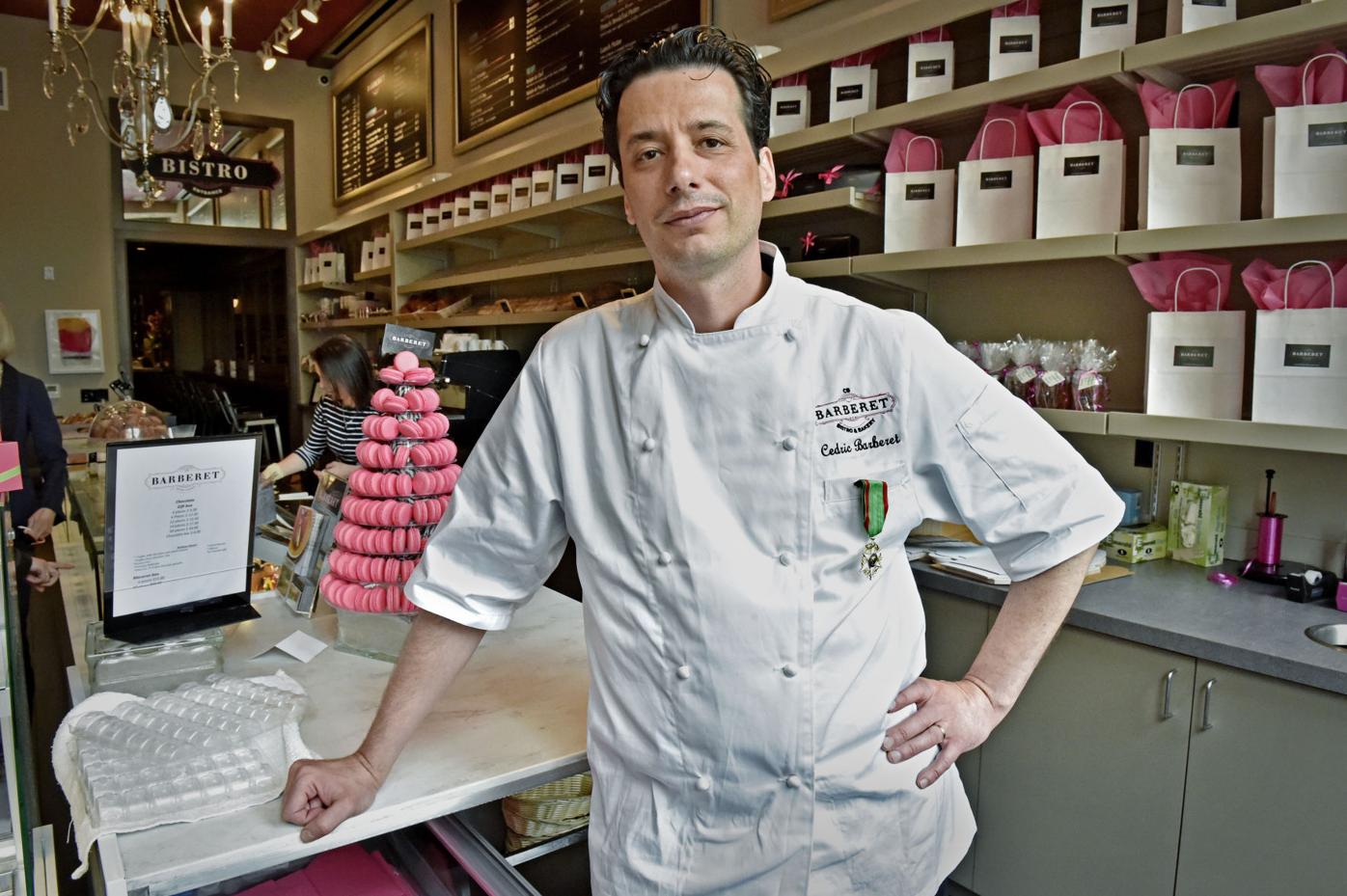 Saying he felt he had made his pastry chef father in France proud, Lancaster's chef Cedric Barberet bested three other pastry professionals to win "Chopped Sweets" on the Food Network.

The episode of the pastry competition, on which Barberet won $10,000, aired Monday night.

Barberet was classically trained in his native France.

On Monday's episode, which was filmed in New York in November, Barberet had to incorporate unusual "mystery basket" ingredients into his pastry presentations.

“I hate to lose, because I’m such a perfectionist,” Barberet said early in the show. He didn't have to worry.

In the strawberry round, Barberet and three other chefs had to incorporate century eggs (a strong-smelling preserved egg), cilantro, strawberry crispy rice treats and strawberry liqueur into a dessert.

Barberet created a bright-looking dish, plated around the circular edge of a his serving dish. He created a strawberry gelée with cilantro-mascarpone cream with a rice treat crumble.

Judges Matt Adlard and Dan Langan and host-judge Scott Conant sent Barberet to the next round, calling his dish "an immaculate presentation."

Barberet seemed unflappable during the competition, barely turning around from his work as the judges pointed out that flames were rising above his strawberry liqueur on the stove.

In the vanilla round, Barberet and the other chefs had to incorporate a rotisserie chicken, vanilla bourbon cheesecake, vanilla chai latte mix and dried apricots into a dessert.

The judges took the contestants' performance in all three rounds into consideration in declaring Barberet the "Chopped Sweets" champion.

The episode was the 13th of the first season of the show, which is a spin-off of the original "Chopped" competition that has aired 45 "seasons" since its 2009 premiere.

Barberet opened Bistro Barberet & Bakery, a restaurant and bakery, in 2015. The bakery is open Tuesday through Saturday for carryout (only) of bakery items and confections and fully cooked, ready-to-reheat dishes from the restaurant.

Barberet, a native of Villefranche-sur-Saone outside Lyon, France, began his career working in his father's pastry shop.

Before moving to Lancaster, he worked at such prestigious restaurants as Le  Bec-Fin and Buddakan in Philadelphia. He was executive pastry chef at Mar-a-Lago in West Palm Beach, and made the wedding cake for the 2005 marriage of now-President Donald Trump and now-First Lady Melania Trump.

In 2016, Barberet was named one of the top 10 pastry chefs in America by Dessert Professional Magazine.

He became a member of the Académie Culinaire de France in 2011 and in 2017 was awarded the Chevalier de l’Ordre du Merite Agricole from the government of France for promoting French food, agriculture and culture through his work.

Bistro Barberet was among the Pennsylvania businesses featured in a recent Italian Vogue article.

Barberet isn’t the only person with Lancaster County ties to win the big prize  on a Food Network show recently.

How to cut a chiffonade of greens, plus a recipe for kale salad [Stay-Put Cooking]

How to make your own chocolate nut butter [Stay-Put Cooking]

This hazy IPA is being made around the world to help hospitality workers; Here's where to find it in Lancaster County

How to make one-pot chicken and rice [Stay-Put Cooking]

Editor's note: This story will be updated. Be sure to check back for the latest information.

Chef Eliza Martin, the Pequea Valley High School alumna who won $10,000 on the Food Network show "Chopped," has teamed up with her Pennsylvani…

If you missed the "Jeopardy!" "Greatest of All Time" tournament, which featured Lancaster native Brad Rutter and ran in prime time on ABC over…

Brad Rutter helps actress win more than $30K, so far, on 'Who Wants to be a Millionaire'

Lancaster native and record-setting "Jeopardy!" champion Brad Rutter knows what it's like to be a millionaire — several times over.