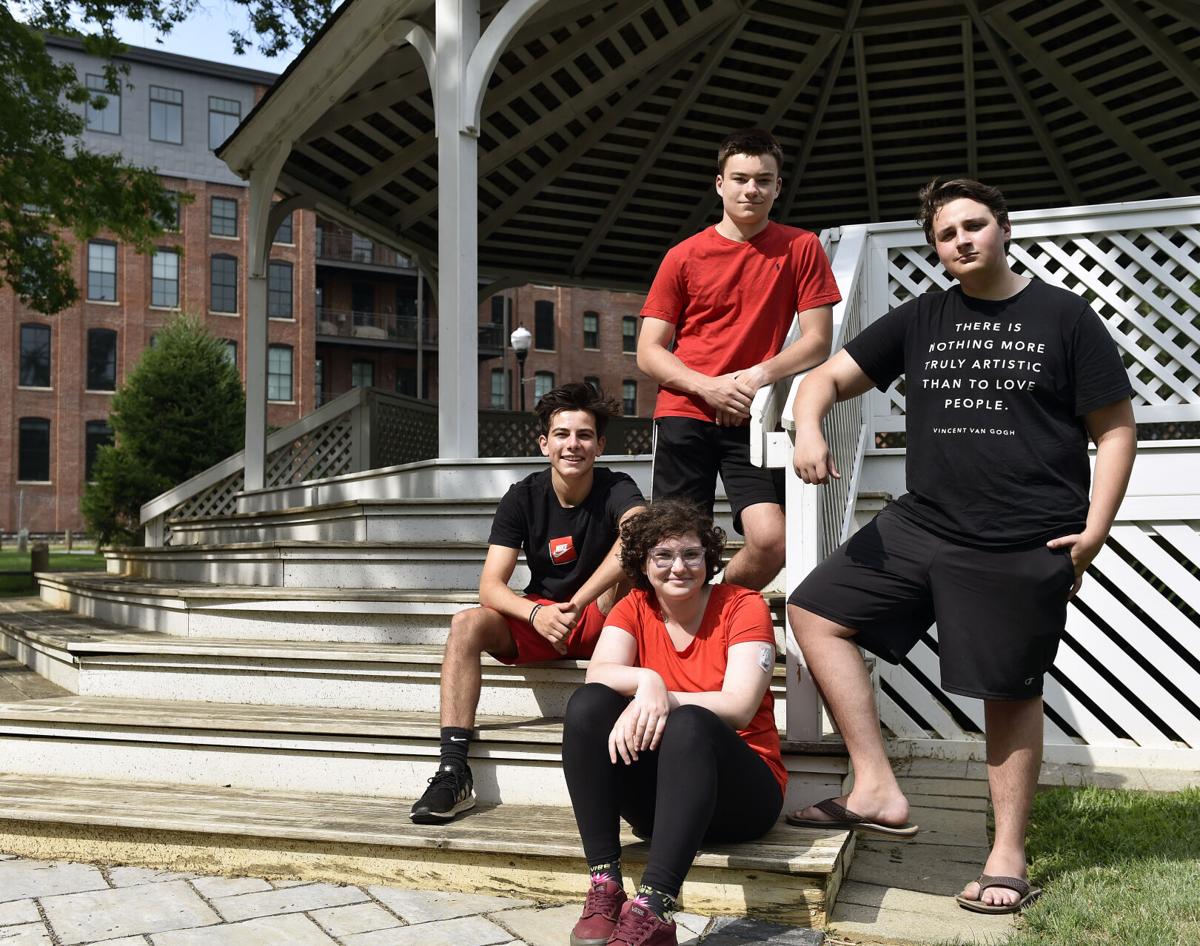 The In Between, a new rock band that's playing as part of an online concert Sunday night, is comprised of Max Bartos, 17, right, Sabrina Lessans, 17, bottom, Michael Agadis, 16, middle, and Colin Meldrum, 17, top. They were photographed at Lititz Springs Park Thursday July 16, 2020. 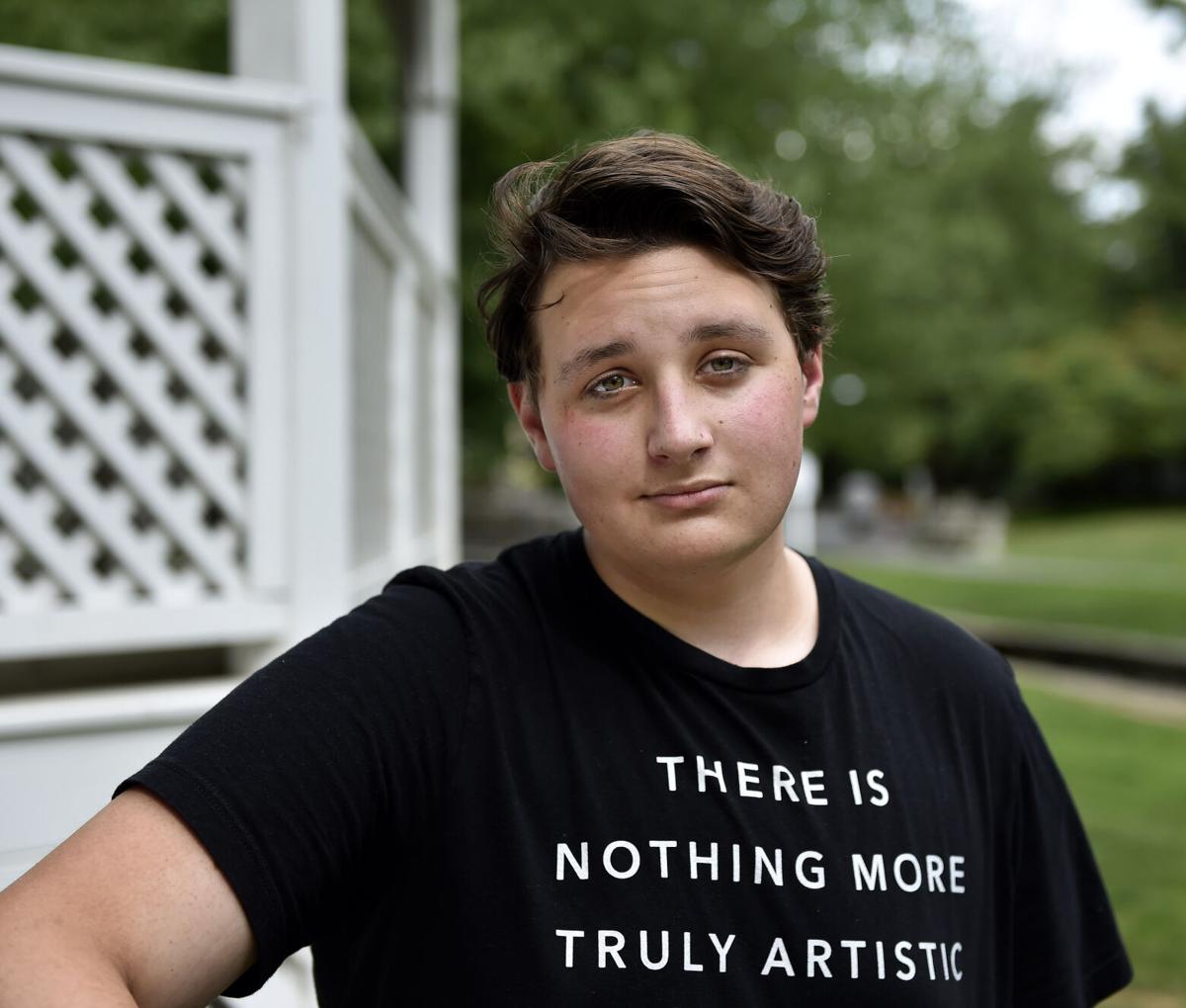 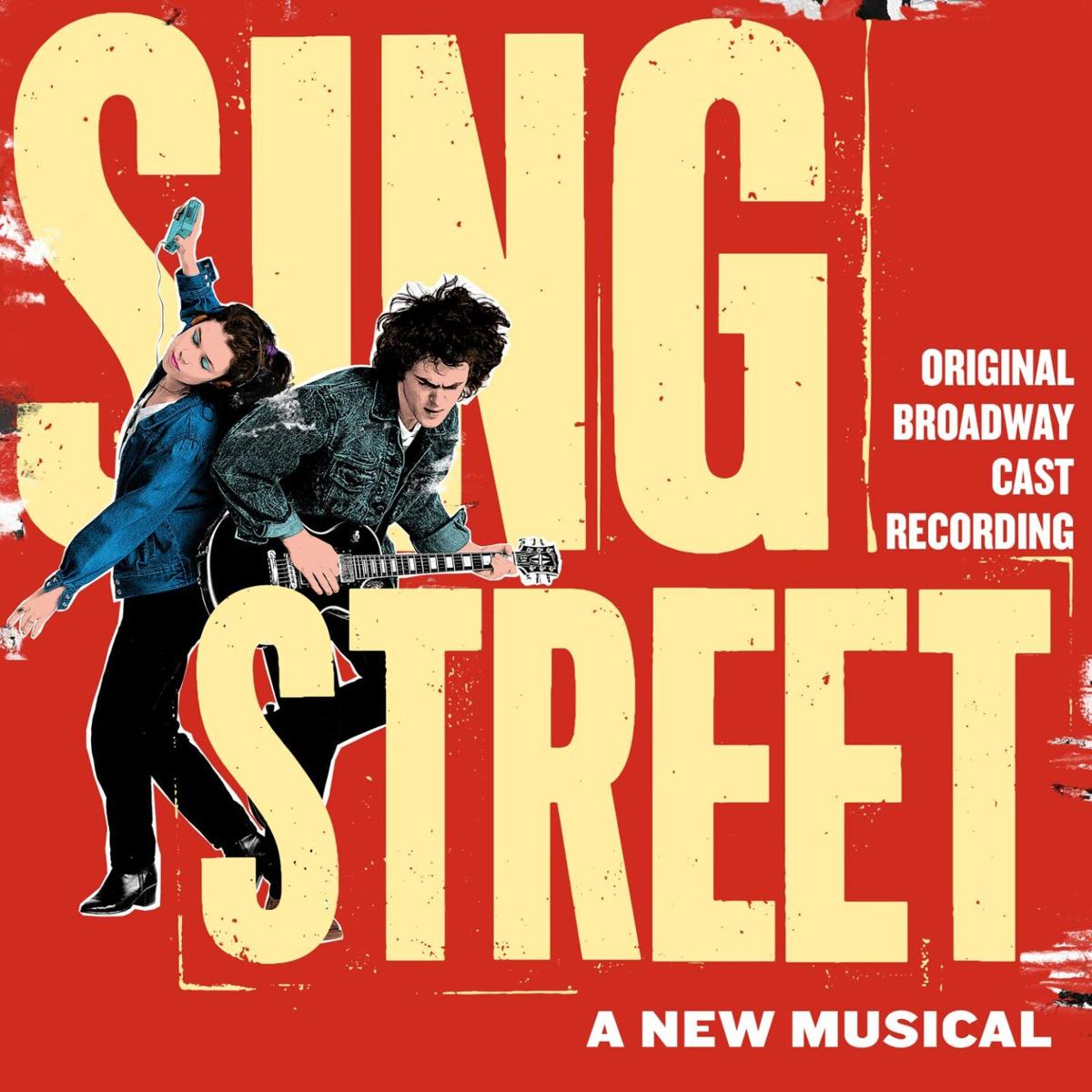 Max Bartos is featured on the Broadway cast album of "Sing Street," the musical he'll return to when Broadway theaters are allowed to reopen.

What does a teenage performer do in the middle of a pandemic, while he’s in his hometown waiting for New York theaters to reopen so he can make his Broadway debut?

He makes some new friends, with whom he forms a rock band and writes songs. He also revives his local theatrical group and organizes a livestreamed concert that’s a fundraiser for the NAACP Legal Defense Fund.

That’s how Max Bartos, 17, of Lancaster, a member of the cast of the Broadway-bound rock musical “Sing Street,” has been spending the COVID-19 lockdown — along with three new local teenage bandmates.

He and new Lancaster-based band The In Between will be one of the acts performing, along with a couple of dozen other young singers, at a free concert Sunday evening that will be livestreamed from the Bartos family home in East Lampeter Township.

“I’m really looking forward to it,” Bartos says. “It’s going to be so much fun.”

The Socially Distant Live Music Concert at 7 p.m. is sponsored by Bartos Theatrical Group, a Lancaster-based organization for young performers that Bartos and his parents, Todd and Rebecca Bartos, incorporated as a nonprofit before he was cast in the off-Broadway production of “Sing Street” last year.

Then, about 25 young Lancaster County performers will sing a mix of pop, rock and Broadway tunes. Bartos has performed with some of them before, at such events as the Young Artist Cabarets at the Ephrata Performing Arts Center.

The In Between will close the show.

The show originally was scheduled to be performed live for a limited and socially distanced public audience in Lititz Springs Park, but had to be moved to the Bartos’ home because of a miscommunication about the permit status for the venue. (Public events aren’t being held in the park for the time being because of the COVID-19 pandemic.)

Masked and sitting on the steps of the Lititz Springs Park gazebo, the members of The In Between talked recently about how much the experience of forming a band has meant to them during this unusual summer of pandemic quarantine.

Bartos, providing guitar and lead vocals for the band, is heading into his senior year at Stone Independent School in Lancaster.

The other three members — drummer Sabrina Lessans, 17; bass player Michael Agadis, 16; and Colin Meldrum, 17, on keyboards — are rising seniors and members of the Quiz Bowl team at Hempfield High School.

Lessans, who previously had been in a band with Agadis, met Bartos through a mutual friend.

She saw Bartos singing and playing guitar in his posts on his Instagram feed. She asked him if he’d like to play guitar in a band; he said yes, adding, “and I can also sing if you need me to.”

“We started a band and reached out to Colin to do keyboard,” Bartos says, “and then Michael came two weeks into us rehearsing to play violin on a song, and then he dropped the fact that he could play bass.”

“Michael had been the singer in our other band,” Lessans says. But when they realized Bartos is a New York theater performer, they asked him to handle the lead vocals.

The band’s music can be characterized as “pop-punk,” Agadis says. “And probably moving into alternative rock, as well,” Bartos adds.

“Before the band, I had been completely locked down in my house,” Lessans says. “I hadn’t really seen friends in a long time.

“I’ve been playing drums and taking lessons for about four years now, and I was in the school jazz band. ... I love drumming so much. I’m always in my basement practicing drums. And I really wished that I could take this somewhere.

“And now that I really can, it’s just so awesome,” she adds. “I’m not just listening to music through my headphones anymore. It’s live ... and it’s a chance for me to show what I’ve learned.”

“I’m enjoying the band a lot because of the creative process, I’d say,” Agadis says. “We write a lot of the lyrics together, and we write a lot of the harmonies — sort of a rough sketch — and then everyone (gives) input. ... That’s something I’ve really enjoyed doing because I’ve never had an outlet to explore that orchestral creation.”

“This is my first band,” says Meldrum, who has been playing piano since he was a kid. “It’s a great way for me to be creative. Before I was in this band, I liked to program, and I tried to create music for my friend’s (video) game that he’s making. It wasn’t coming along great. But now that I’ve been in this band and we’re writing stuff, I feel like I’ve gotten better at writing and figuring out what sounds good.

“So hopefully I’ll continue to get better at it and see where it goes,” Meldrum adds.

The group would like to put out an EP of original songs eventually.

At the concert, Bartos says, they’ll be playing one original song, “Death Has a Heart” — a sort of light-at-the-end-of-the-tunnel song — and some cover tunes by Green Day, Twenty One Pilots, We the Kings and The All-American Rejects.

The band chose the name The In Between, Bartos says, “because that’s where we are in our lives right now. We’re in between being kids and being adults. ... We’re all teenagers, much like how it is in ‘Sing Street,’ the show I’m in.”

When the New York theaters closed in mid-March, Bartos had finished the off-Broadway run of “Sing Street” at the New York Theatre Workshop. He had gotten a chance to visit his new dressing room at the Lyceum Theatre, where “Sing Street” is set to go into production when theaters reopen sometime in 2021.

“Sing Street” is based on a 2016 Irish independent film about a group of teenagers in 1980s Dublin, who escape their troubles — and the constraints of their Catholic school — by forming a band.

In the show, Bartos plays the entrepreneurial Darren, who’s both band manager and videographer.

Before Bartos was cast in “Sing Street,” he performed in a variety of local theaters. He’s had roles in such films as “The Lottery” and Adam Sandler’s recent “Uncut Gems.”

Chameleon Club, American Music Theatre, local venues could get funds to stay open with proposed 'Save Our Stages' Act

Through his Bartos Theatrical Group last May in Lancaster, he presented the musical “Edges” — written by Benj Pasek and Justin Paul, the team behind the Broadway smash “Dear Evan Hansen.”

Bartos says he plans to make an announcement during Sunday’s concert about a musical his theater troupe plans to produce at the end of the year.

His In Between bandmates will be part of it, he says.

Those who want to donate to the NAACP Legal Defense Fund, a nonprofit that works toward racial justice through litigation, advocacy and public education, can do so via the Bartos Theatrical Group Facebook page: facebook.com/bartostheatricalgroup.

The audience can watch the live stream there and on Bartos’ personal Facebook page, facebook.com/max.bartos.357.

“I think in this time, more than ever, especially with people being locked inside, I think something that inspired me to go out and do this concert is that music has always helped me,” Bartos says. “I owe my life to music. I feel like that’s something that can speak to everybody right now ... because music is a form of escapism.

“So it’s kind of cool to be able to share that experience with other people,” Bartos adds.

•  How to watch: View the live stream free on either of two Facebook pages, facebook.com/max.bartos.357 or facebook.com/bartostheatricalgroup.

•  Benefit: Donations are being collected for the NAACP Legal Defense Fund; donate at: facebook.com/bartostheatricalgroup.

Chameleon Club, American Music Theatre, local venues could get funds to stay open with proposed 'Save Our Stages' Act

Editor's note: This story will be updated with the latest information.