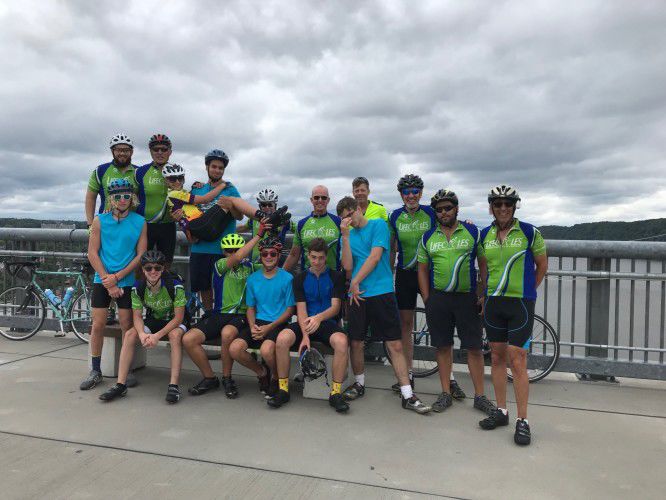 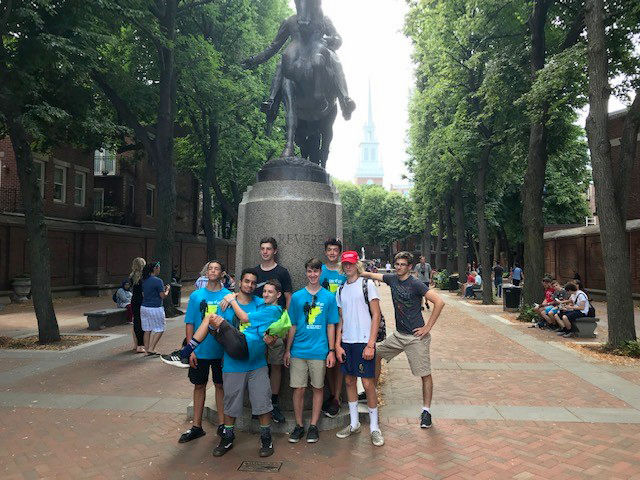 Having completed their ride to Boston, members of the LifeCycles team toured the Freedom Trail. Standing in front of the Paul Revere statue, with North Church in the background, are, from left, A.J. Vega, Monny Smith holding Zander Malanchuk, Aaron Eaby, Micah Clark, Zach Greineder, Brock Bolton and Austin Hillegass. 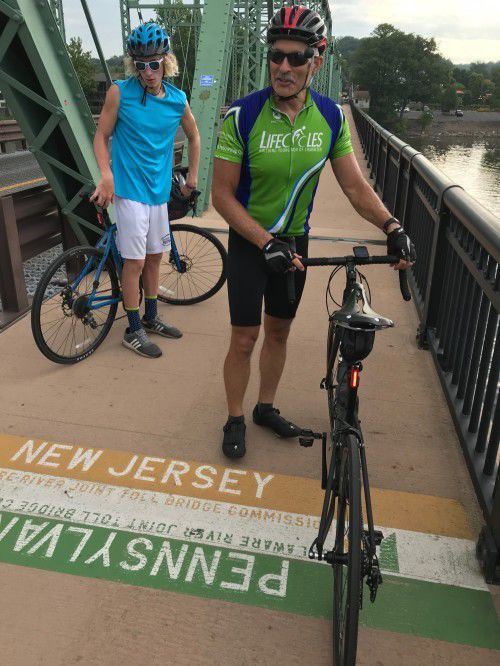 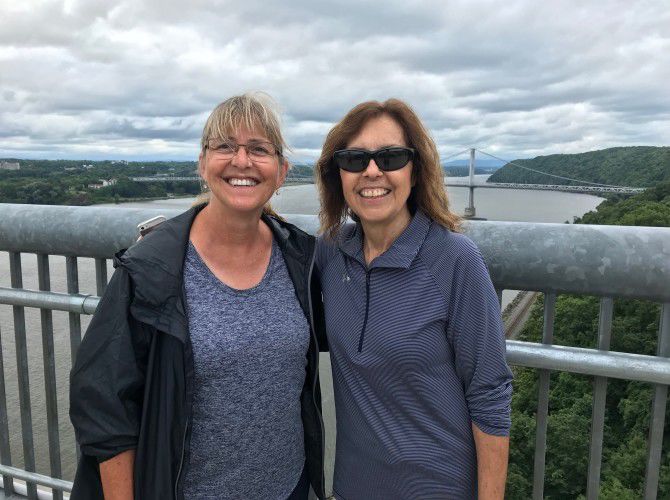 On July 20, eight boys and eight adult leaders went on a bike ride ... to Boston.

The nine-day, 500-mile trip — known as the LifeCycles Extreme Challenge Ride — took place during one of the hottest weeks of the year and included climbs guaranteed to tax any rider.

The youths — ages 14-18 — and adults who took part are members of LifeCycles, an organization founded in 2014 by Lee DeRemer, a retired U.S. Air Force officer and York County native who now serves as vice president for people and culture at Lancaster Bible College.

The organization’s mission is to wrap “mentoring, spiritual development and life skills development in the adventure of a Christ-centered bicycle touring experience for urban teens.”

Along the way, they learn to deal with adversity while building friendships and personal strength.

“We try to change lives one ride at a time,” DeRemer said. “For a lot of boys who don’t connect with different sporting events or team activities, this bicycling is the first thing that has been a real success story for them, and they blossom.”

The idea behind LifeCycles began to percolate in 2009 when DeRemer took two boys in his extended family on a 25-day bike ride as a way to help them through a difficult period after their father’s death.

Two years later, while attending   Halftime Institute, a Christian institution that helps people find purpose in their lives after they have completed their careers, he was given one minute to draw a vision of what he might want to do for the rest of his life. He drew a bicycle on a road flanked by a dozen stick figures. It resonated with other members of the class.

“It was clear that these folks saw something more than I did,” he said.

In 2014 he founded the program as a way to help youths.

“The short version,” he said by telephone, “was I got tired of seeing teenagers get picked off by the culture.”

Initially established to help fatherless urban boys, he soon realized that all boys face similar questions as they mature.

Historic St. John's Episcopal in Compass will celebrate its 290th anniversary on Sunday

He and his wife, Marcie, used their personal savings to buy 15 bikes, helmets and water bottles. Today, through donations, the organization has grown to 50 bikes. It has 152 members — including 80 active riders — and 68 adult volunteer leaders. This year, the program expanded to include girls.

Riders and mentors train twice a week and occasionally on Saturdays. Prior to each ride, leaders offer a short spiritual message.

The 2019 Extreme Challenge Ride was spearheaded by board member and fellow rider Jeff Bradley, a retired Hempfield teacher and cross country coach.

Bradley also organized last year’s Extreme Challenge Ride — a trip that began in McKeesport near Pittsburgh   to Washington, D.C., along the Great Allegheny Passage and the C&O Canal towpath.

Bradley was one of the eight adult leaders (plus two drivers who carried snacks and extra equipment in their vans) in this year’s ride that ended in Cambridge, Massachusetts, on July 28. He also was the planner, mapping the route, scheduling meals and hotels. The riders rode between 52 and 83 miles each day. On the sixth day — a cross-Connecticut ride from Barkhamsted to Ashford — the riders climbed a cumulative total of 4,048 feet, including a 23% climb.

The previous day — a 60-mile ride from Millbrook, New York, to Barkhamstead was one that could have been disastrous but had a fairy-tale ending.

Bradley uses the Adventure Cycling Route Network, which suggests biking routes and lists lodging and restaurants where riders can stay and eat.

When planning the trip several months in advance, Bradley was unable to find lodging in the Barkhamsted area. In desperation, he called Holly Krouse, Barkhamsted’s town clerk.

“There’s a fishing lodge that might be willing to put you up,” she told him.

Salvatore Tartaglione, owner of Legends on the Farmington River, said he could lodge 14 of the 18. He then volunteered to call his neighbor, Karen Tyson, who agreed to house four kids at her place.

“The kids loved the lodge,” Tartaglione said by phone this week. “They all took a swim in the river.”

When Bradley spoke to Tyson, she volunteered to cook breakfast for the entire group.

“She provided us the greatest breakfast,” Bradley said. “I just think of all these kind people. And what I thought was going to be the worst day ... it turned into our absolute best day. We were so blessed.”

“That’s the kind of story the kids all learn from,” DeRemer said. “Lots of times, the unexpected things are the times when God has a lesson he wants to teach us that we didn’t see coming.”

Sometimes the lesson is about perseverance. DeRemer said during the 2018 ride, rains had washed out part of the C&O Canal trail along the Potomac River. The riders had to determine how to bridge the gap and link up with the trail downstream. They ultimately decided to carry their bikes and gear through the water and thick brush to reach the undamaged trail.

It was, he said, “group problem-solving, a little leadership development.”

For Micah Clark, 17, a senior at Hempfield High School, who moved to Lancaster County from Steamboat Springs, Colorado, a year ago, LifeCycles has provided a chance to meet boys his own age.

“I enjoy the group,” he said, adding that “the leaders were really good mentors.”

This is Aaron Eaby’s fourth year with LifeCycles. The 16-year-old Penn Manor junior said the rides over long distances created a unique camaraderie.

“We had nicknames based on our riding style,” he said. “My nickname was ‘Puller’ because I led the draft one day for five miles.”

The final day’s ride was 52 miles, the last 11 of which follow the Minuteman Bikeway from Bedford to Cambridge.

DeRemer picked up the bikes in a van and the riders took the subway into Boston where they walked the Freedom Trail — a 2.5 mile path past locations that played a vital role in the hstory of the United States.

“The kids were just loving it,” Bradley said.

Clark and Eaby said the final ride into Boston was exhilarating.

“The exciting part was when we got on the Minuteman trail,” Clark said. “There was that feeling that I just did 500 miles on a bicycle from Lancaster.”

Added Eaby: “I could finally change out of my biking clothes.”

Eaby faces a greater challenge next year. He has signed up to do the 62-day LifeCycles cross-country trip.

Bradley said the group was fortunate in that they had only seven flat tires and three crashes “and the crashes all happened at zero miles an hour” when the riders were unable to get their shoe clips off the pedals in time.