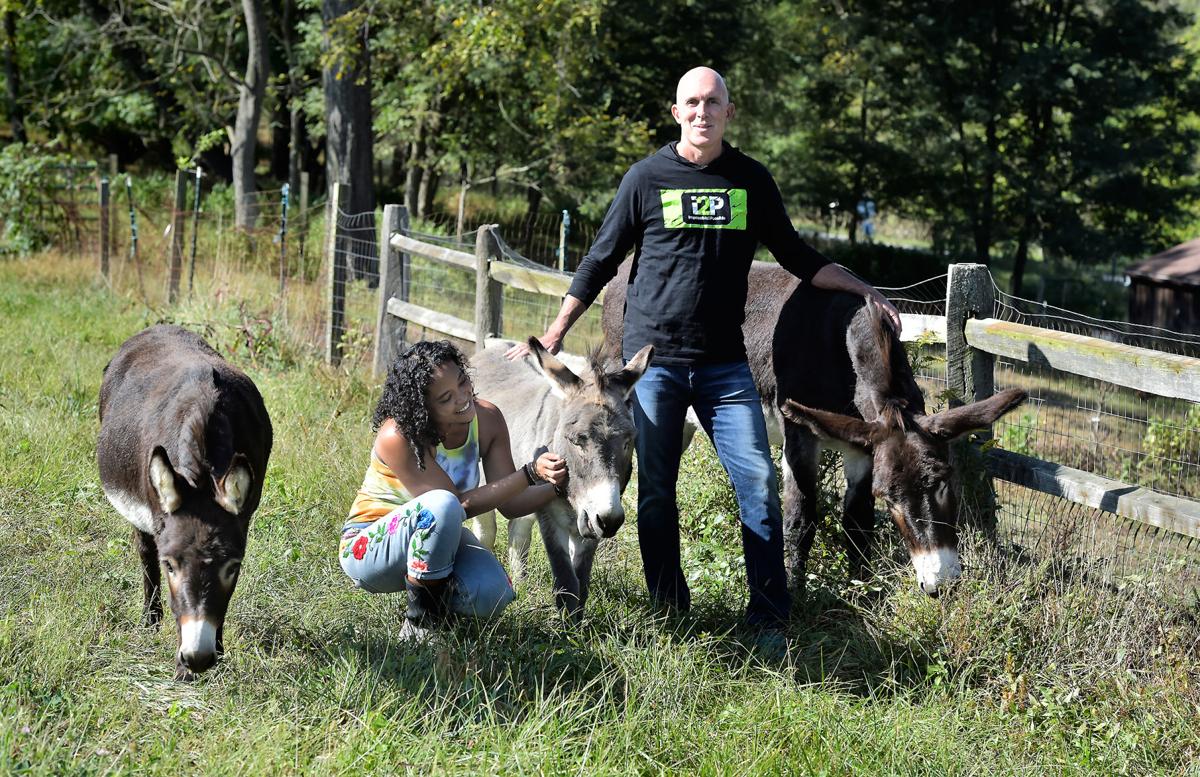 Christopher McDougall’s latest book got its start when a little gray donkey (center) showed up at his Peach Bottom home. 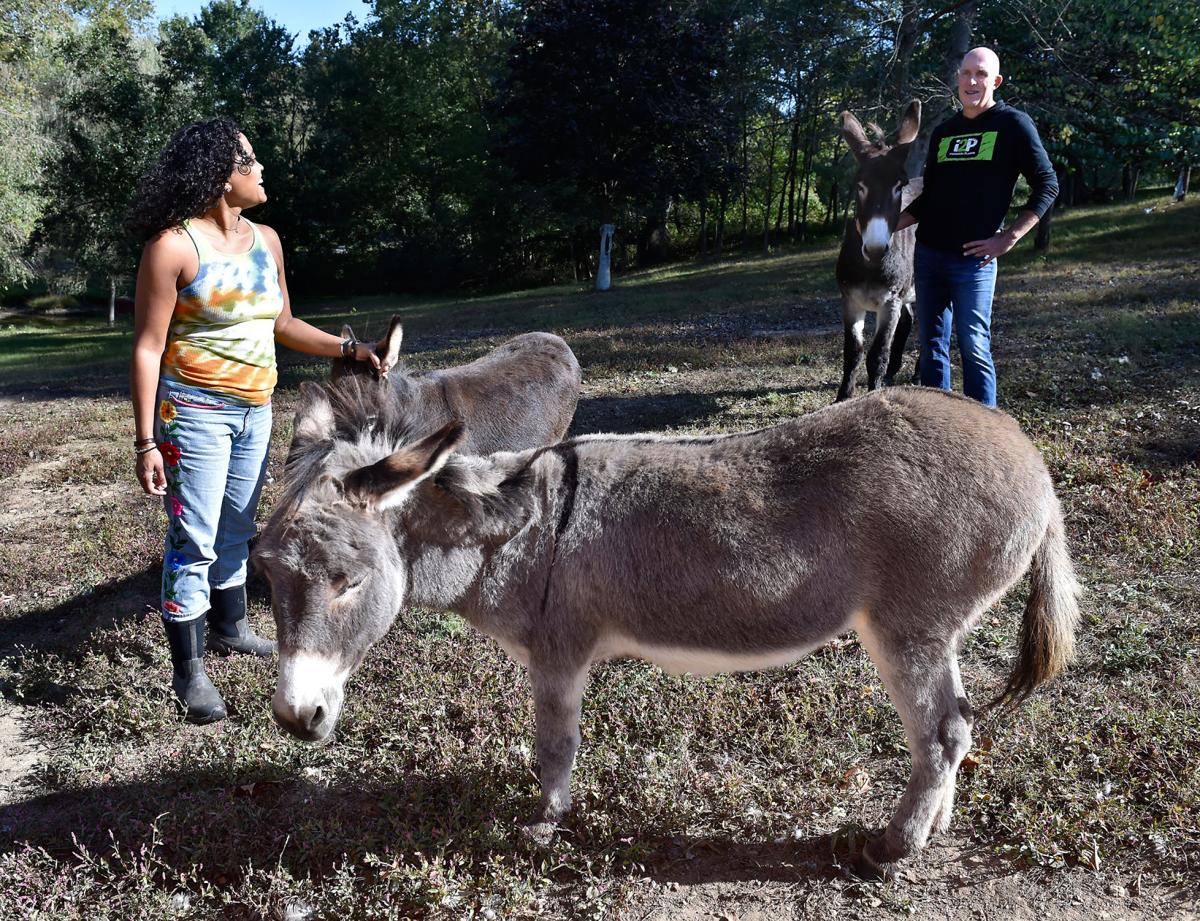 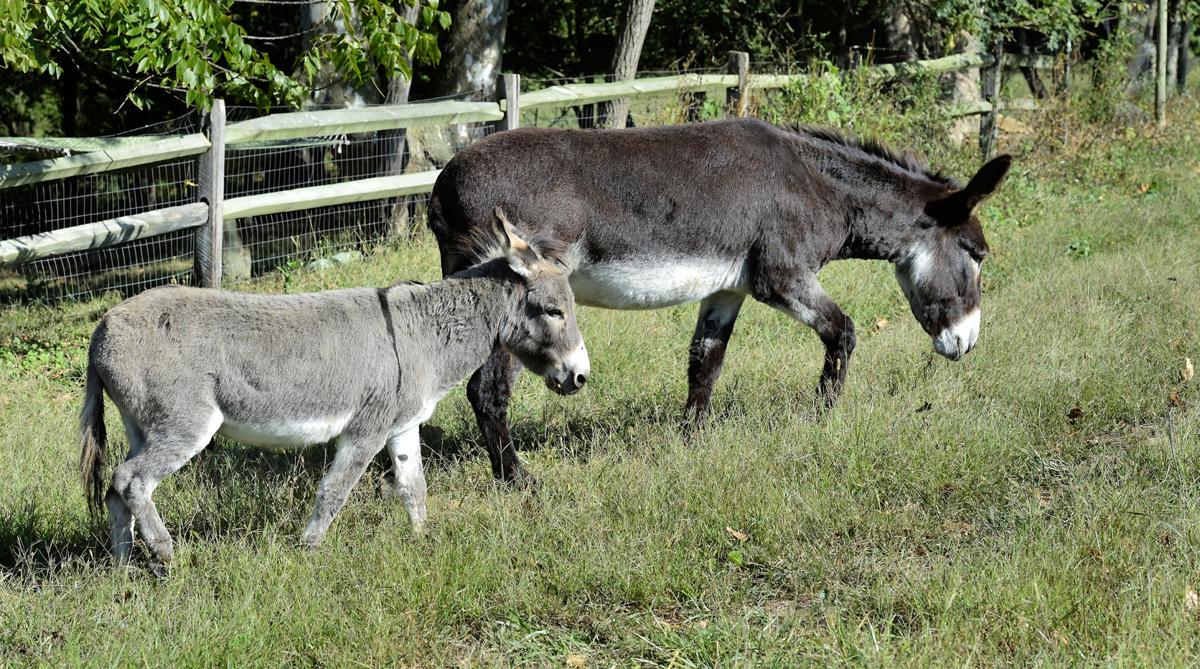 Sherman (left) doesn't like to run alone so Flower (right) and Matilda (not pictured) will join the group. 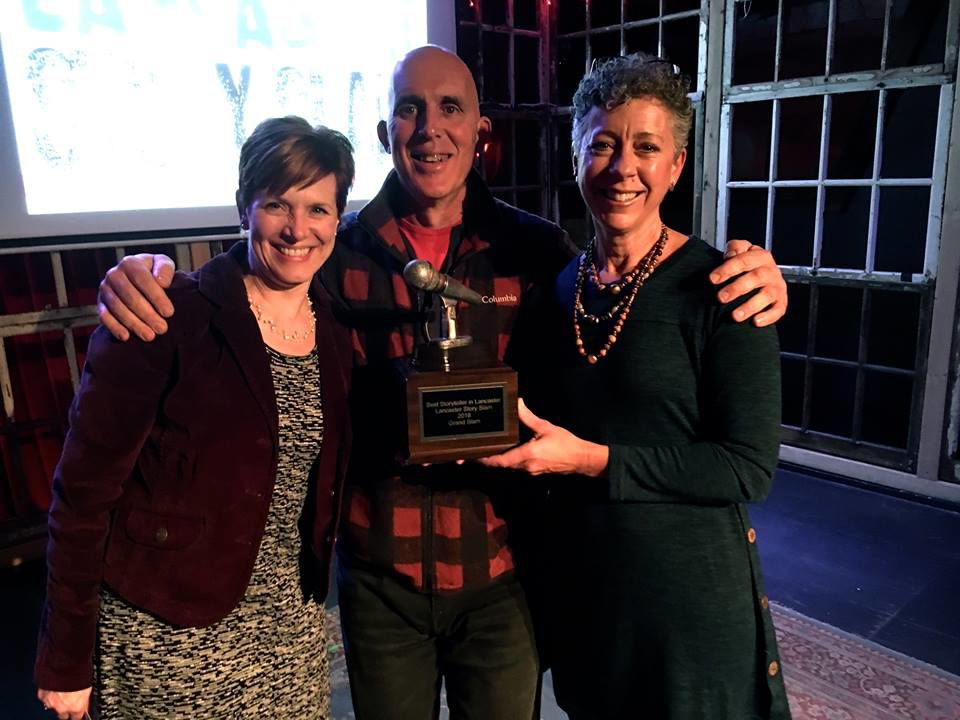 Christopher McDougall’s latest book got its start when a little gray donkey showed up at his Peach Bottom home. The donkey was rescued from an animal hoarder who kept his animals in a dirty, crumbling barn. The donkey’s fur was filthy, he was bloated and his hooves curled up like pointy witch’s shoes.

For McDougall, it wasn’t enough to give a home to the troubled donkey. The Peach Bottom resident wanted to train this skittish donkey to be a running partner, a runner good enough to compete in a race in the city at the highest altitude in the country.

To make that happen, he needed to recruit helpers who were donkey whisperers. He also needed to figure out basic yet complicated logistics such as: How do you move a donkey to Colorado?

McDougall, who wrote the bestseller “Born to Run: A Hidden Tribe, Super Athletes, and the Greatest Race the World Has Never Seen,” shares his story about turning a rescue donkey into a road racer in “Running with Sherman: The Donkey with the Heart of a Hero.”

In the book, which will be released Oct. 15, he examines our connection to animals and how that has real consequences on health and behavior. He weaves in stories about Amish running clubs, Lancaster County’s southern end and long-distance truckers.

Before he went to England for the start of a book tour, McDougall talked about his book at his home. (Yes, the man who helped popularize barefoot running greeted us with no shoes on his feet).

McDougall set out a few years ago to bond with the rescue donkey, named Sherman. To help Sherman, an animal that has a reputation for being stubborn, learn how to run, a friend brought McDougall another donkey and then a third. Each donkey needed a human on the other end of a rope, so McDougall’s wife, Mika, joined, along with a rotating group of friends who ran with the donkeys.

Not just any human would do. One runner was too alpha, calling the donkeys wimps.

“They’ll go great if you make them feel comfortable,” McDougall says of the donkeys. “If you’re going to try to intimidate a donkey, forget it. You lose.”

McDougall has long advocated for barefoot running and long races. Mika McDougall prefers dancing. But she joined Sherman’s running team, even if the animals were intimidating at first. Hitting the road with animals made running much more fun, she says.

“Going out with the animals is really just playtime,” Mika McDougall says. “It makes it a different experience.”

McDougall’s interest in running with the donkey started as an experiment, not a book. However, when McDougall, who has written for Esquire, New York Times Magazine, Outside, Men’s Journal and New York, explained the donkey training to an editor, she saw the potential.

That’s going to make a great book, the editor told McDougall. At the time, Sherman was barely walking.

As they progressed, McDougall learned more about animal-human partnerships.

“This isn’t just a story about us trying to run with a donkey,” he says. “It could be tapping into a much deeper mine of knowledge.”

And the mine is deep. Humans have lived closely with animals for thousands of years. Only now are we realizing the consequences of living apart, he says. Studies show stress levels and blood pressure drop and feel-good hormones like serotonin and oxytocin jump when animals are around.

“My theory is that the reason why is because, physiologically, we became hardwired to find comfort and security in the presence of animals,” he says. 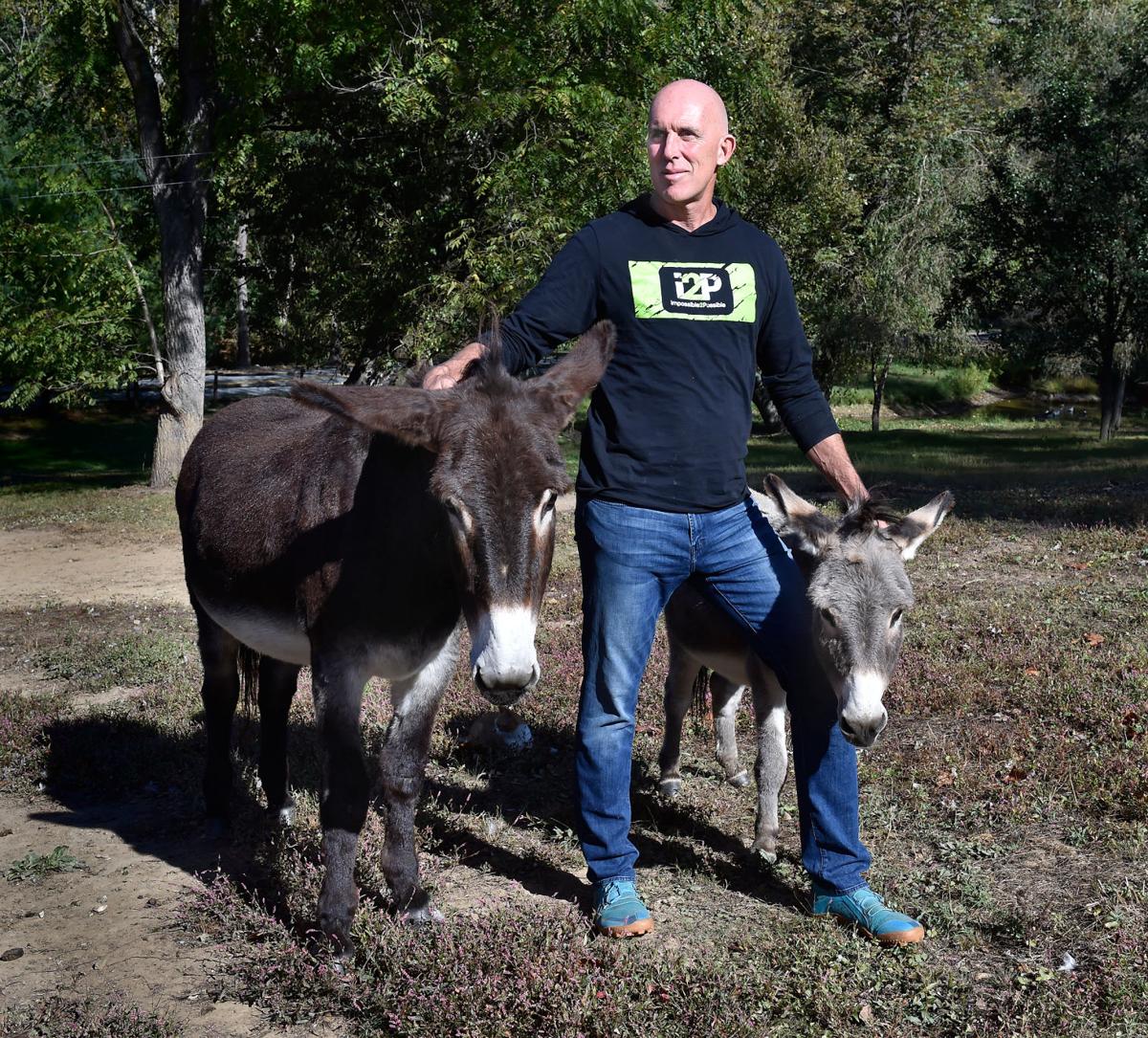 Christopher McDougall with Flower and Sherman. 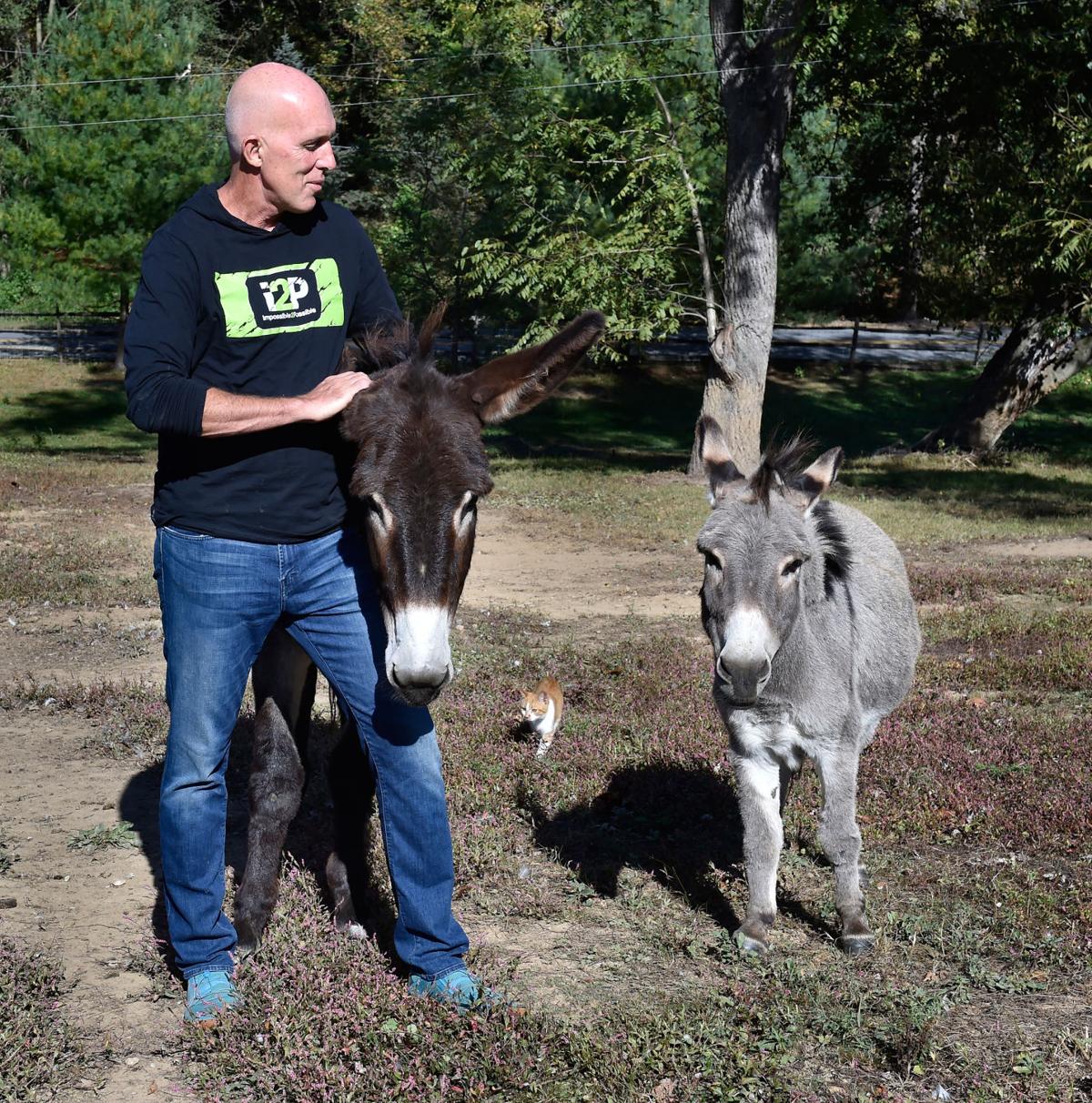 The McDougalls have donkeys, plus a few goats, ducks and cats. 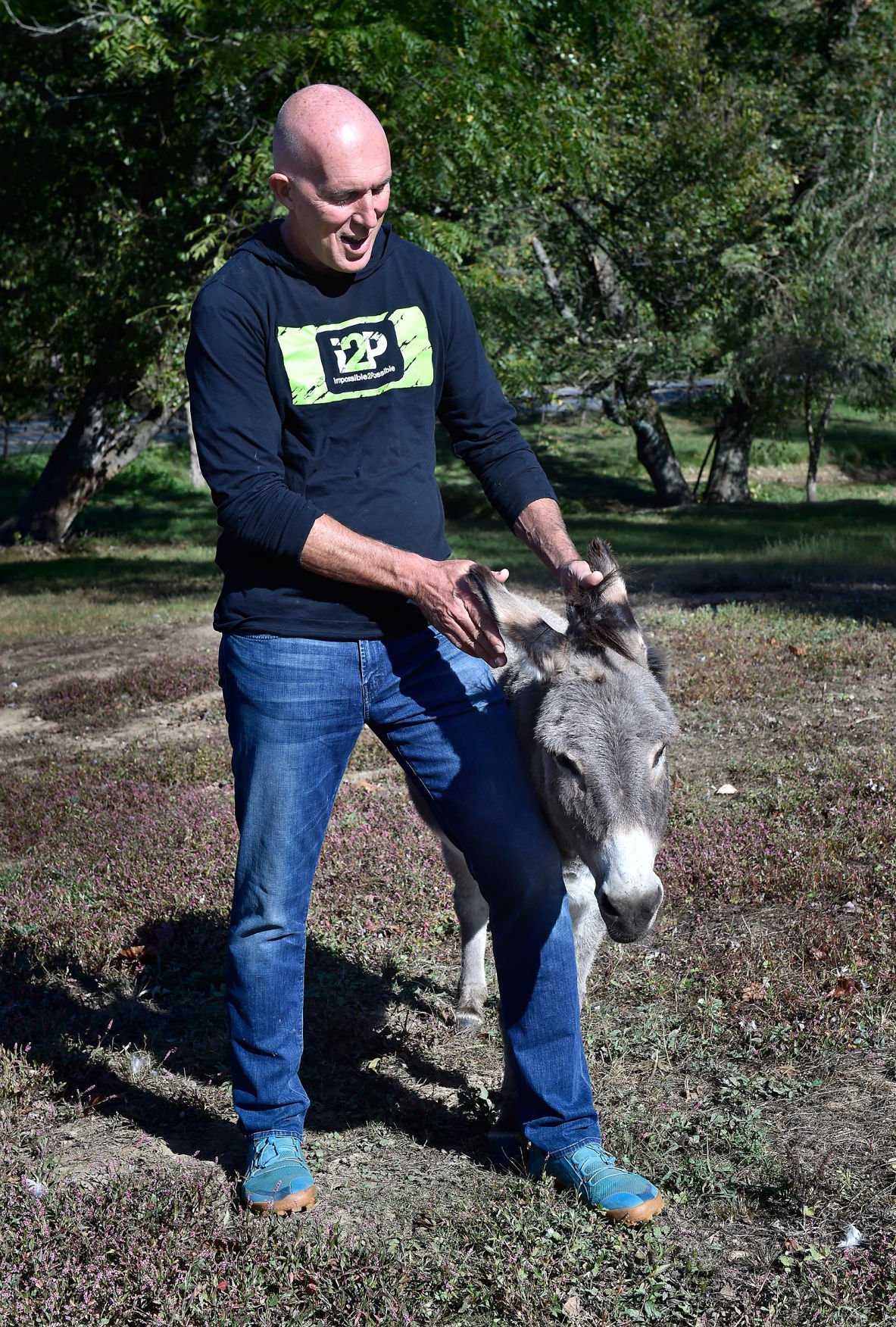 Sherman has come a long way since he was rescued from an animal hoarder. 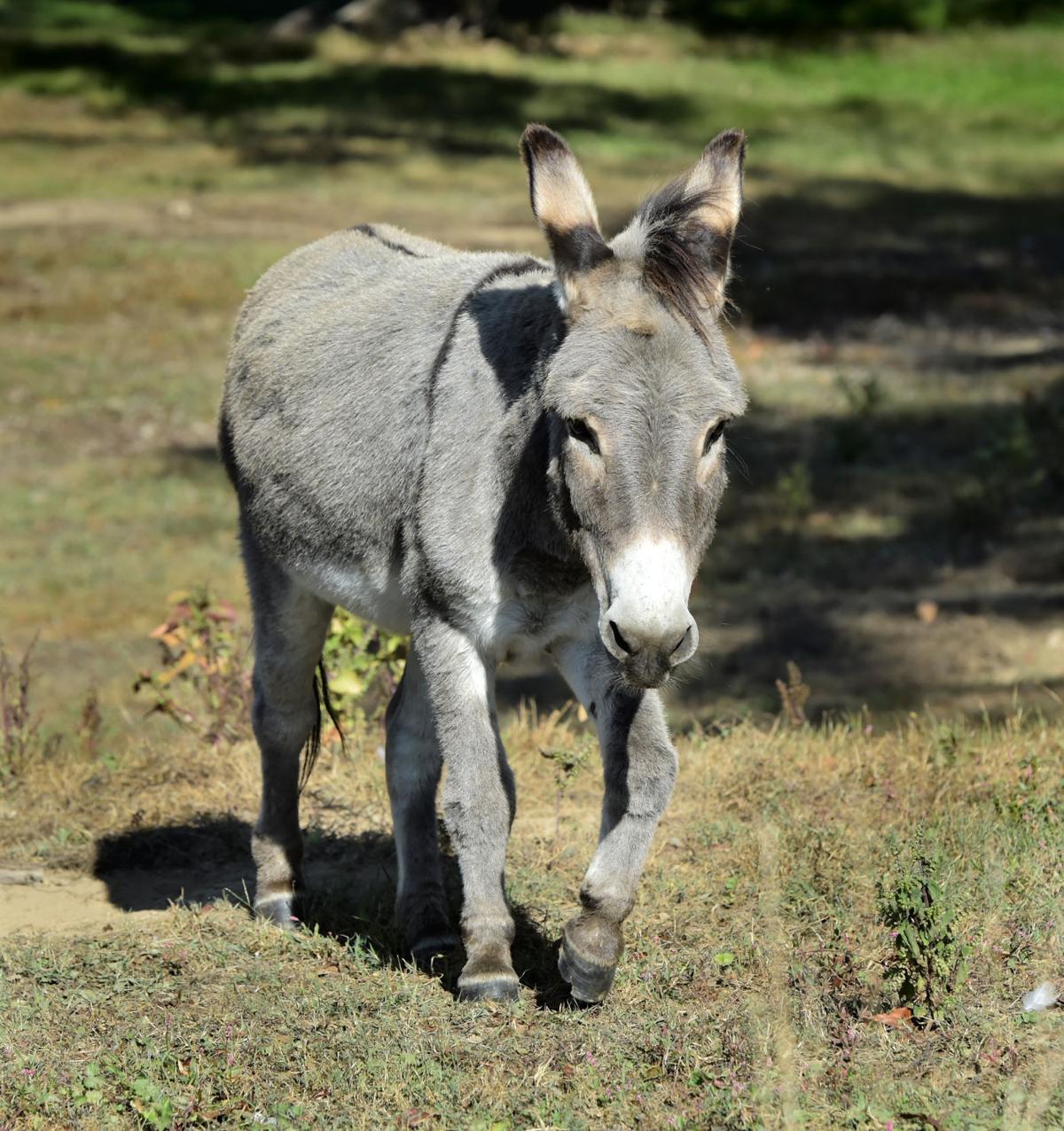 After Sherman came to the McDougall home, it took him a while to walk. 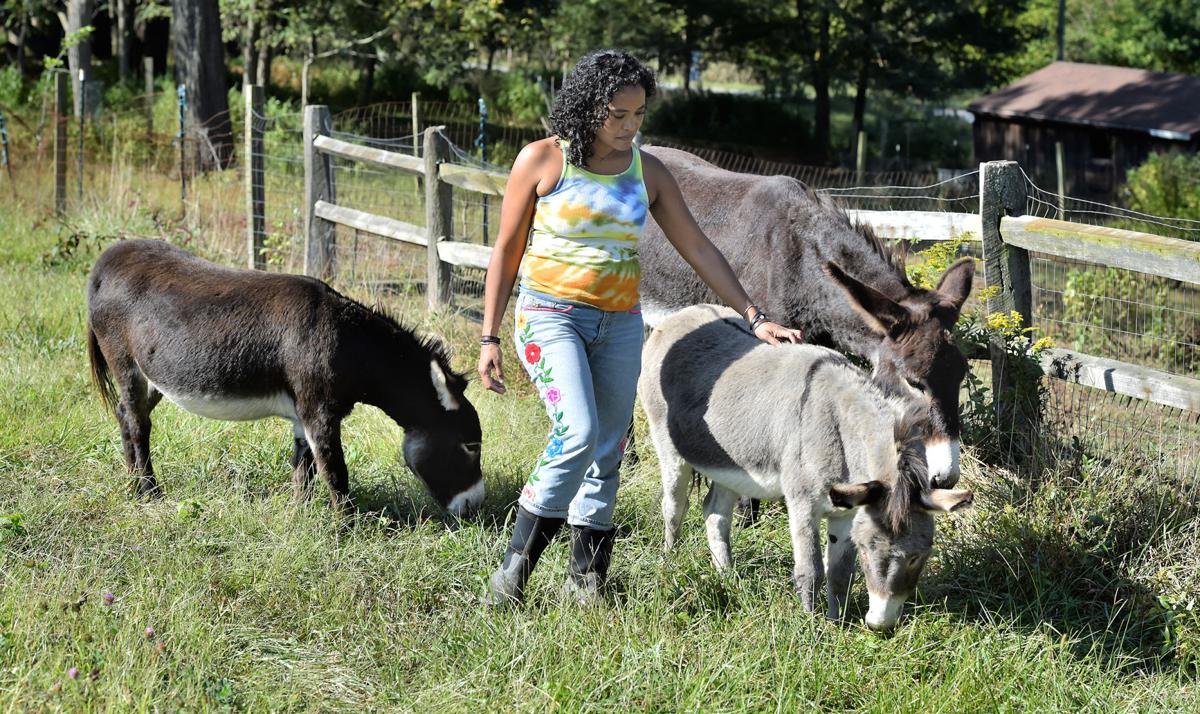 Mika McDougall is a dancer, but she was recruited to run with the donkeys. 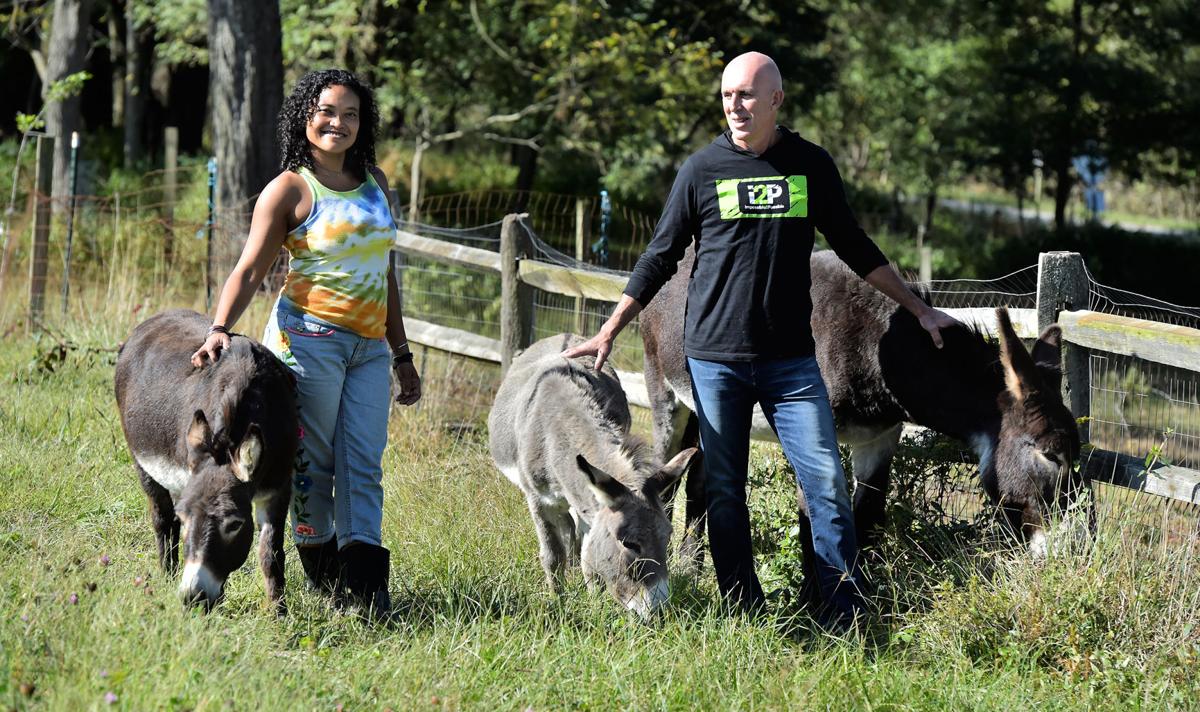 Sherman, Flower and Matilda (left to right) like to run together and eat together. 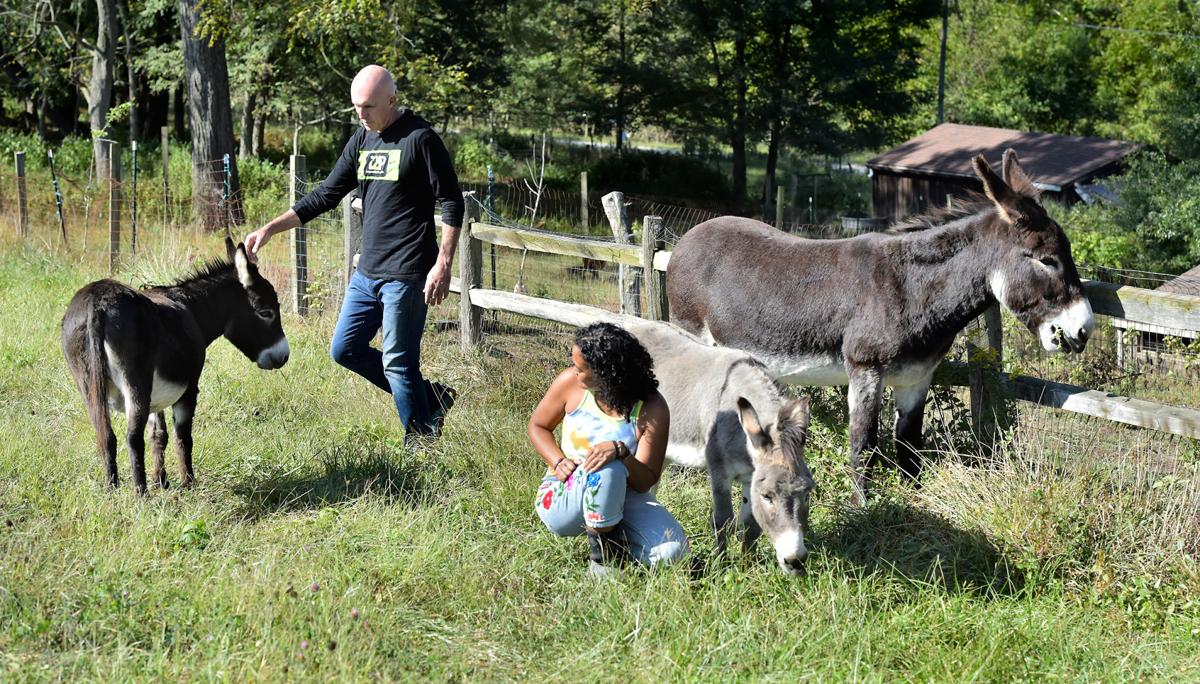 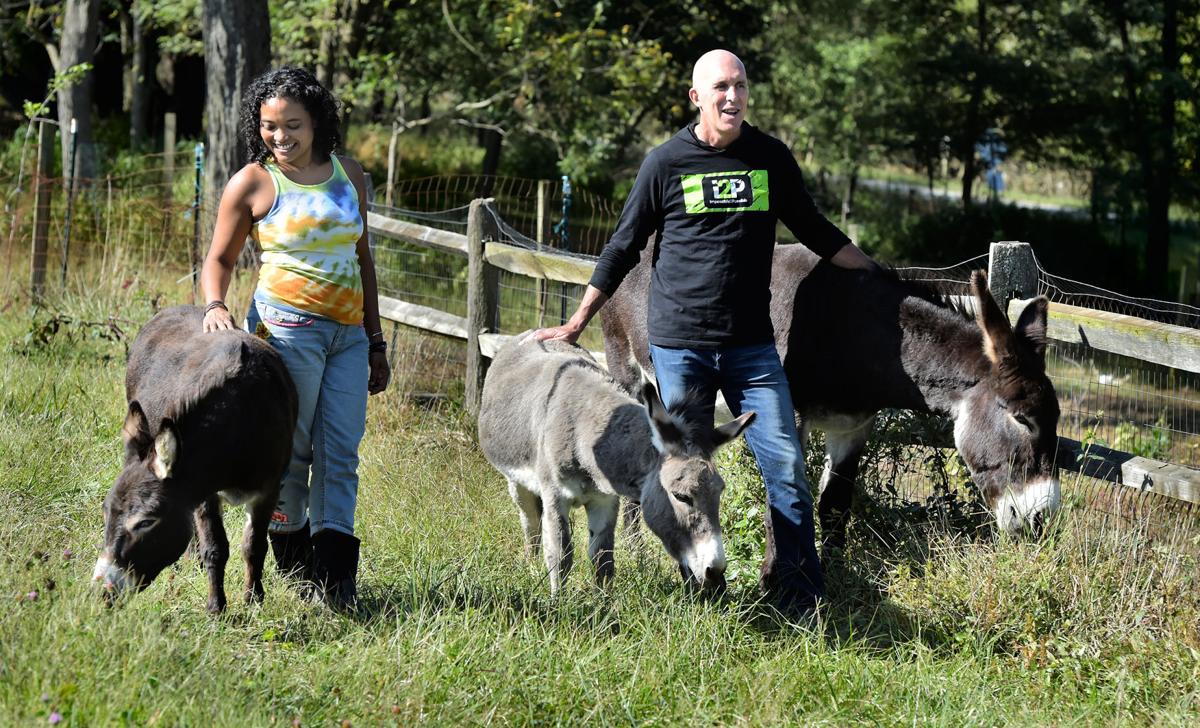 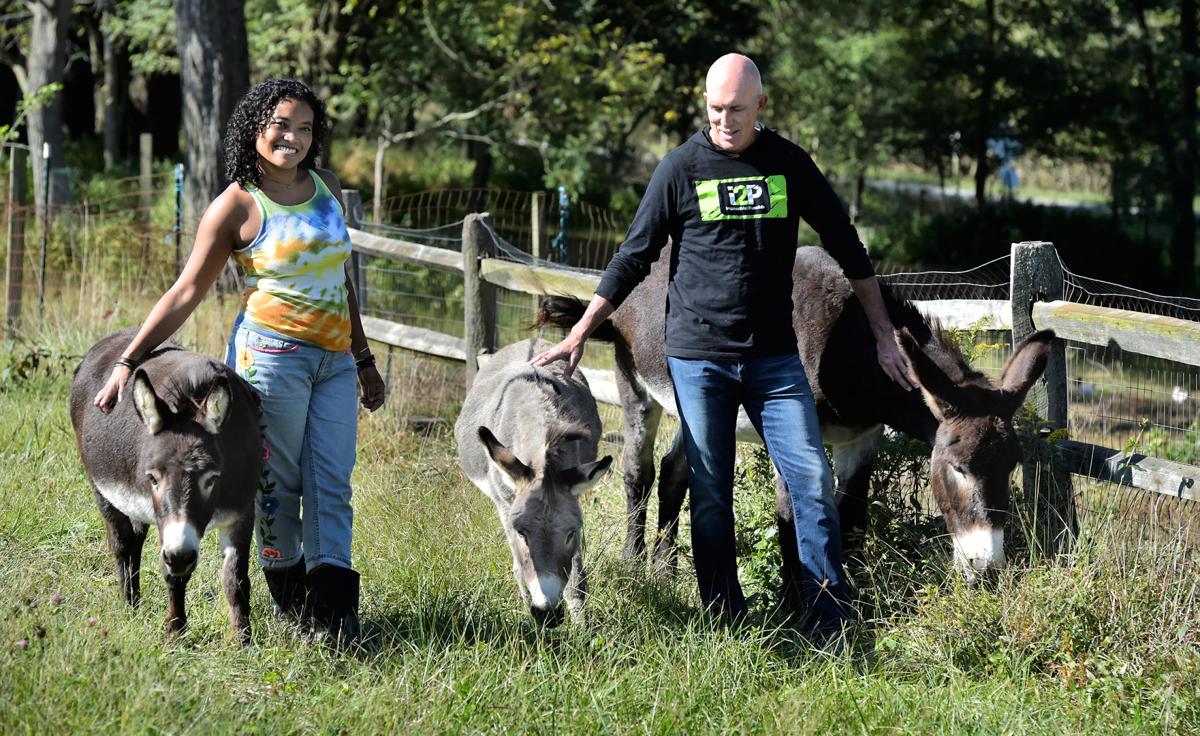 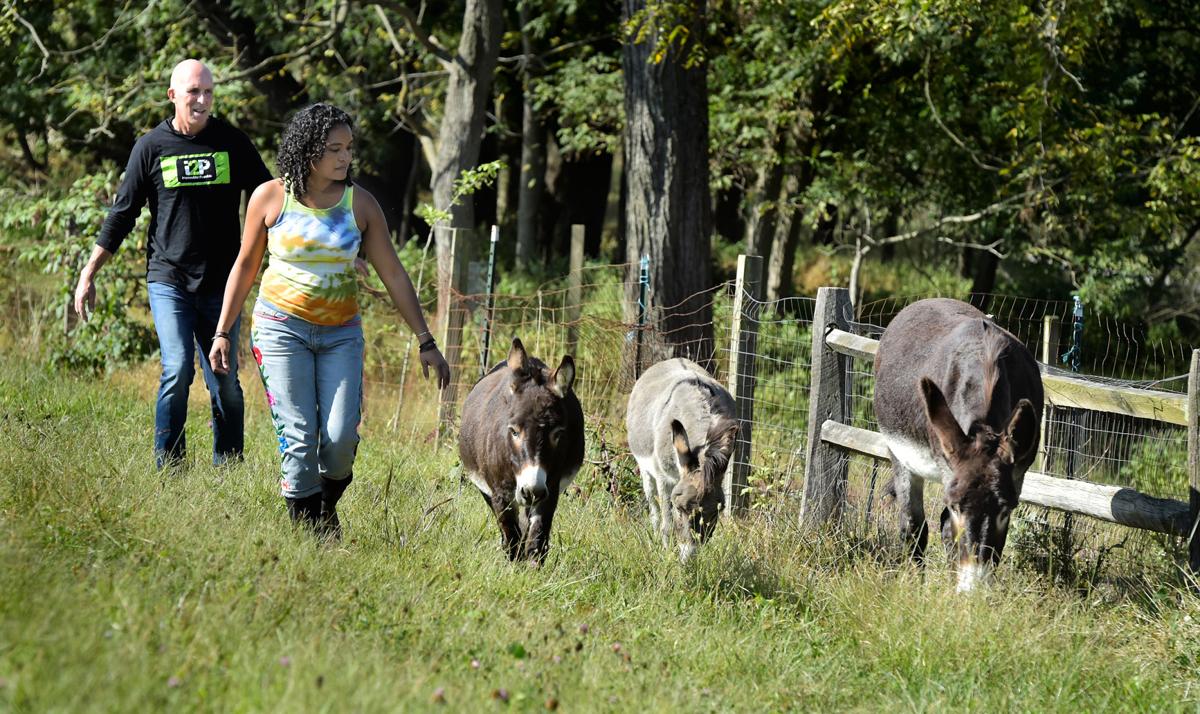 Christopher McDougall with Flower and Sherman.

The McDougalls have donkeys, plus a few goats, ducks and cats.

Sherman has come a long way since he was rescued from an animal hoarder.

After Sherman came to the McDougall home, it took him a while to walk.

Mika McDougall is a dancer, but she was recruited to run with the donkeys.

Sherman, Flower and Matilda (left to right) like to run together and eat together.

McDougall has written about other cultures around the world, like the Tarahumara, long-distance runners from the Copper Canyons of Mexico, that he spotlighted in “Born to Run.”

In his new book, he includes personal stories about his Amish and Mennonite neighbors, and Amish running clubs. The McDougalls moved from Philadelphia to Lancaster County 17 years ago. They talk with their Plain neighbors every day. Still, they had a lot to learn.

“The more you learn about people close to you, the more you realize you don’t know,” he says.

He actually met two members of the local Amish running group in Chicago. He was there for a book event, and they had traveled there for a big race.

Back in Lancaster County, he joined a few of their full-moon runs and morning runs. Instead of making running a solo experience, the group runs together. The group’s name, Vella Shpringa, means “Let’s All Run” in Pennsylvania Dutch.

Running with a group is more McDougall’s style than putting on headphones and focusing on a fitness tracking watch.

A run is a chance to catch up with a friend. And before you know it, you’ve both run five miles.

When he’s not running, reporting or writing, McDougall goes on stage monthly with Lancaster Story Slam. At each event, 10 people go on stage to tell stories in five minutes. McDougall won a slot in last year’s grand slam and won with a tale about life in Philadelphia.

Joining the story slam has helped him connect with audiences at book events. It’s also a different way of looking at a book: not one huge tale, but a series of short stories.

The early reviews of “Running with Sherman” have been encouraging. Runner’s World says it’s bound to be another page-turner and Publisher’s Weekly calls the book a “tenderhearted memoir.” “Runners and animal lovers alike can find inspiration in this story of the ways in which humans and animals connect,” reads the Publishers Weekly review.

The book also has fans at Netflix. Last week, Deadline reported “Running with Sherman” would become a feature film for Netflix. The conversations about adapting the book have been ongoing for a while, McDougall says, but he still had not learned the details.

Randall Green, who writes for Showtime’s “Billions” will adapt the book.

Chris McDougall, who grew up in Philadelphia, said he would love it if Will Smith would portray him on screen.

Mika McDougall said she’d pick Zendaya, whom she loved in “The Greatest Showman.”

McDougall says he already has spent about a year working on his next book. But first, he wants to focus on “Running with Sherman.”

A Lancaster County company had a hand in the production of the book “Running with Sherman.”

“Running with Sherman” showed up as a composing assignment from Penguin Random House. As the staff paginated the text, they realized the local connection. The company also composed the text for “Born to Run.”

“It is a pleasant surprise,” Wolfe says. “It was really interesting to see that he was not only a local author but had also been a newspaper writer.”

McDougall, as a foreign correspondent for the Associated Press, covered wars in Rwanda and Angola.

What: Event for “Running with Sherman.”

Details: At 3 p.m., join Christopher McDougall for a 5K fun run (or less, choose your distance) through the wooded trails behind Lancaster Country Day School. After the run, enjoy apple cider, snacks and get a temporary tattoo of Sherman the donkey. At 4 p.m., McDougall will give a presentation about his new book, “Running with Sherman.” Event features a raffle for prizes, including the chance to spend a day (and run) with the donkeys.

Sept. 5 had been like any other day at the Giant supermarket in Mount Joy until shoppers heard a loud thud at the self-checkout section.