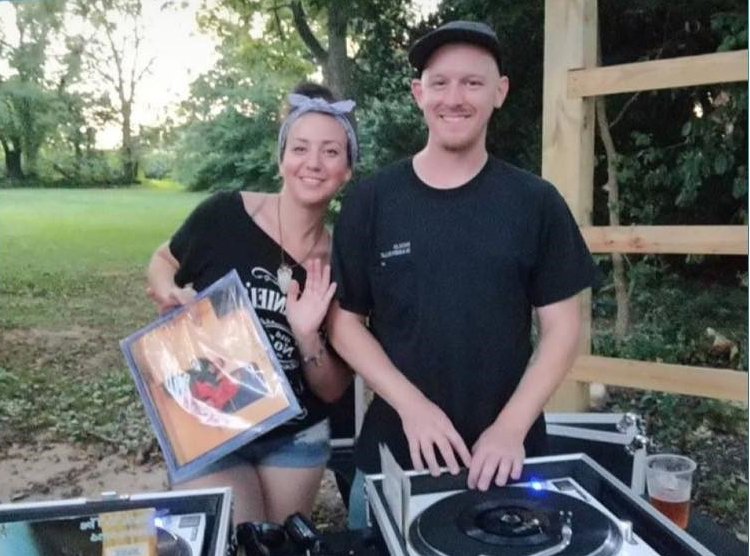 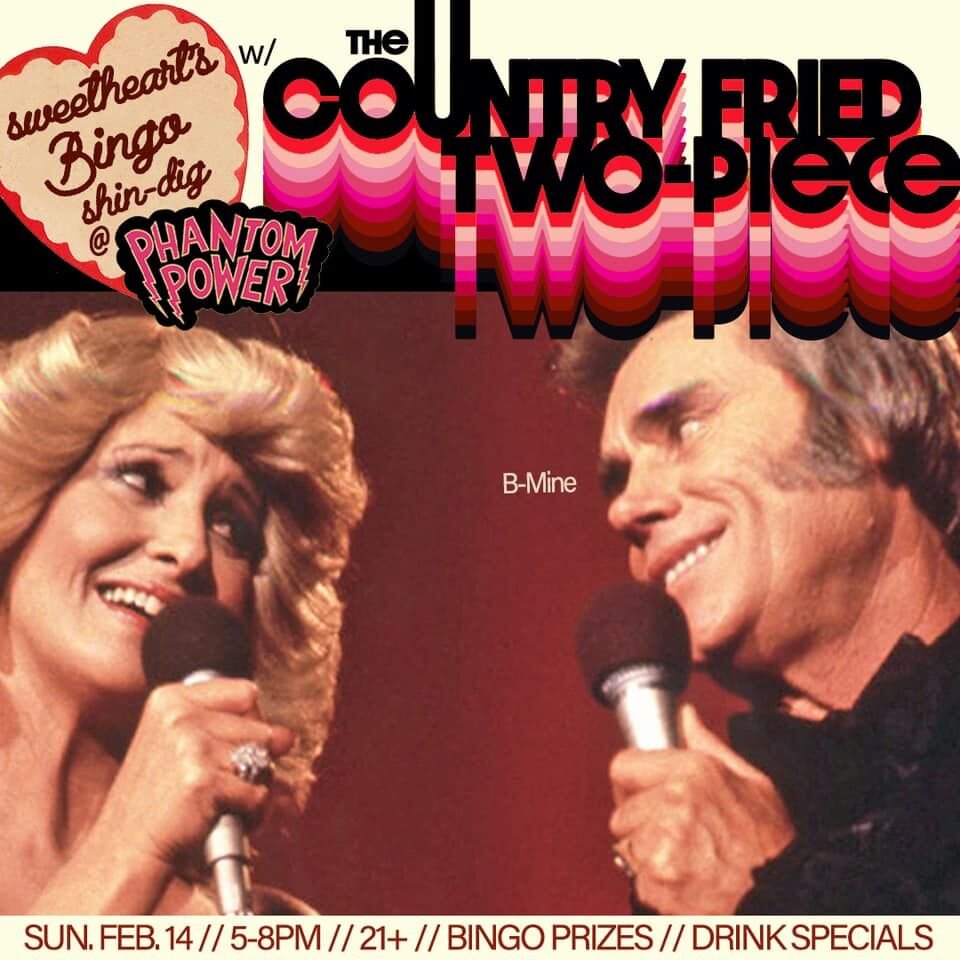 The poster for the Country Fried Two-Piece Valentine's Day Shin-Dig at Phantom Power in Millersville on Sunday, Feb. 14.

Dolly and Porter. Loretta and Conway. Brett and Stephanie?

While Brett Keller and Stephanie Keener don’t sing country ballads themselves, they do play a lot of them together. With their monthly “Country Fried Two-Piece” events, the couple has funneled their large collection of country vinyl records into a DJing pursuit.

On Sunday, Valentine’s Day, the duo will present “The Country Fried Two-Piece Valentine’s Shin-dig” at 5 p.m. at Phantom Power, where they’ll spin country love songs and preside over some games of bingo.

“It’s Valentine’s Day, so I might as well do a show with my girlfriend, right?” Keller says over the phone.

While Keller and Keener tend to wing it when it comes to picking tunes for their regular events (their event posters usually include the letters “BYOV” — “Bring Your Own Vinyl”), they say they have a short list of country love songs planned for the show, to correspond with the bingo portion of the evening.

“Shannon (McNally, Phantom Power events coordinator) actually suggested the incorporation of bingo, and at first, I thought it could be a lot at once, but I’m really excited about it now,” Keener says.

In addition to bingo, guests are invited to attempt to outdress Two-Piece megafan Cody Leaman, who regularly attends the DJ nights in full cowboy regalia, for the chance at a $25 gift card.

Whether you’re a fan of Waylon and Willie and the boys, or your taste skews more towards rhinestone cowboys, if it’s country and worth hearing, you can assume it’ll show up on the “Country Fried Two-Piece” turntable.

“We don’t really go in with a plan, and we do this at home, too, where’s it like, ‘OK, every other song, it’s your pick, now it’s my pick,’ going back and forth,” Keller says with a laugh. “We just have an agreement kind of, whether you like it or not, you’re going to sit through it and you’ll get your chance next time to play something else.”

‘Country music is kind of as good as it gets’

The pair of music fans first got together in 2018 over — what else? — their shared eclectic tastes in music. Keener, 37, first spied Keller, 29, as he was DJing gospel, soul and R&B records on the rooftop of Tellus360, where he works as a sound engineer and occasionally spins under the nom de plume Budget Wax.

“We actually didn’t know that we both liked country music at first,” Keener says. “But we knew that we were both into vinyl and music in general, which is why we started talking.”

Lest you think these are youngins with a passing southern taste, both Lancaster County natives boast some version of country bona fides. Keller spent seven years going to school and working in Nashville before returning north with hundreds of classic country LPs and 45s. Keener, meanwhile, has it a little more in her DNA — her father and other family members were in Lancaster country bands such as Ken Lightner & the Playboys, the Keener Family Band and Midnight Express.

“I’m a music fan, but first and foremost, my main focus is being a sound guy,” Keller explains. “When it comes to sound recordings and studio musicians, country music is kind of as good as it gets.”

Tellus360 used to host “Western Wednesdays,” wherein country bands would come and perform. On a night when a band didn’t show up, Keller volunteered the record collection he shares with Keener as a suitable replacement. People came dressed up to dance and play indoor cornhole, and it was deemed enough of a success that Keener and Keller filled in whenever necessary.

Smash cut to mid-2020, when Keller and Keener found themselves temporarily furloughed and looking for an outdoor space to continue spinning. In June, “Country Fried Two-Piece” started hosting monthly events in the outdoor beer garden at Phantom Power.

“If it’s too windy, you can have a lot of problems, because it blows the needles around,” Keller says, describing the act of DJing outdoors. “If it’s windy enough, it’ll take a record right off of the turntable. But other than that, it’s not much different.”

For a genre with as rich a history as country music, each outing features a generally eclectic vinyl mix ranging from the ’60s to the ’90s.

“We always play — and if we don’t play it, it’s always requested — Roger Miller’s ‘Chug-a-Lug,’ so we always bring that,” Kenner says. “I always like to end with ‘The Party’s Over’ by Willie Nelson. Also, if we find any ’90s country on vinyl, we snatch it up because people request that a lot, but if you think about it, that’s when people were buying cassettes, so it’s hard to find ’90s vinyl.”

Keller, meanwhile, tends to pick more southern rock — hence the “fried” portion of the name — as well as the sillier stuff.

“I like some of the goofier kind of country, like the Buck Owens and Roger Miller type of stuff. Jerry Reed has a song called ‘She Got the Gold Mine (I Got the Shaft)’ — funnier stuff like that that are also good drinking songs.”

Like any pair of vinyl fans, their relationship has progressed to a point where nearly all of their several shelves of records have coalesced into one. Just don’t ask for an exact number.

“You’re, like, asking me to admit that I have a problem,” Keller says, and the two start laughing. “I always love it until times like right now, because we’re in the middle of moving and I think about moving all of them, and I hate it.”

Wheatland Middle School will immediately move to a virtual format through Wednesday, Feb. 17 due to a shortage of staff, the School District o…

With the current combination of COVID-19 and snowstorms every other week, you can be forgiven for waiting to make Valentine's Day plans.

Return to sender: Lancaster man finds love letters from the '40s and '50s, reunites them with family

All my life, screens have been a place of escape.

LNP | LancasterOnline asked readers to share a little bit about their marriages, and almost universally, couples expressed how communication, …

Forget the flowers, confections and all the other clichés — if you really want to leave an impression on someone special, let music do the work.