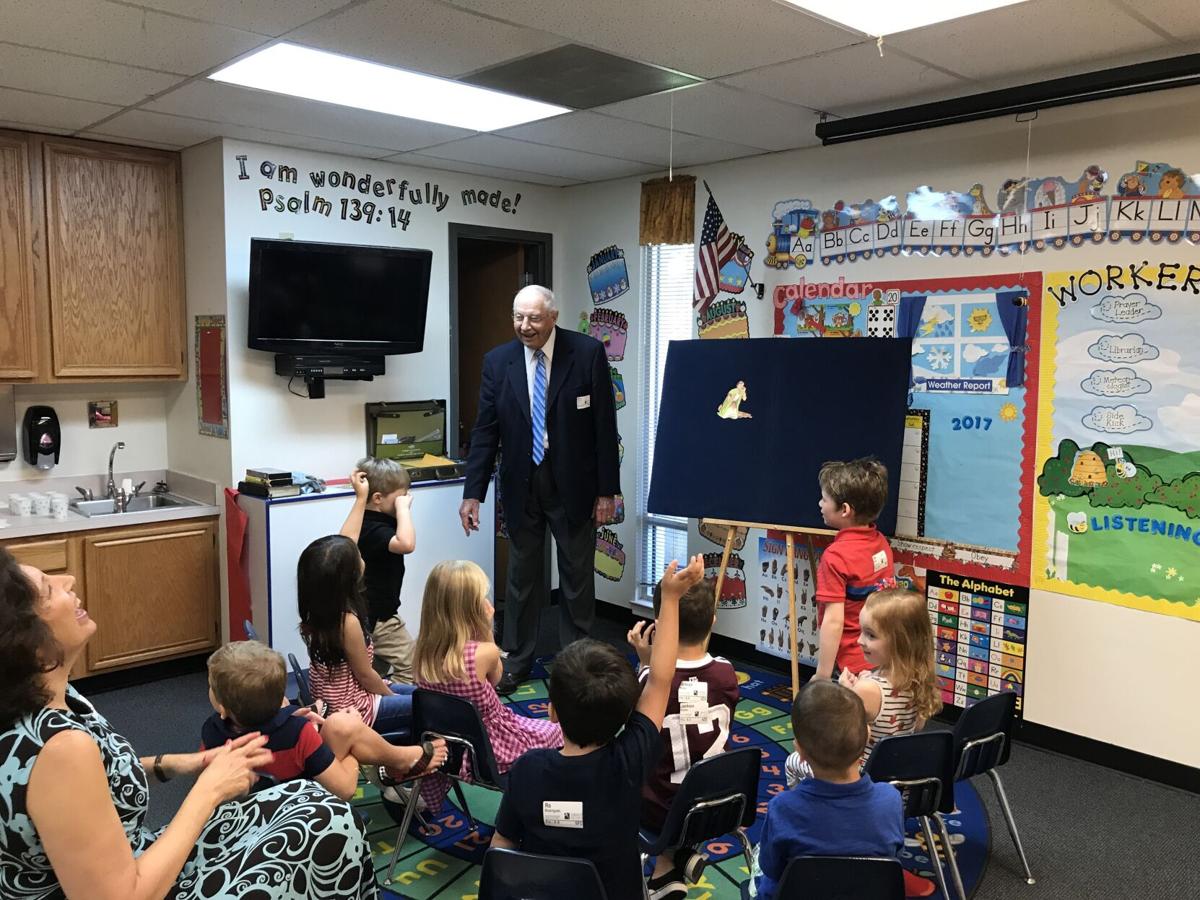 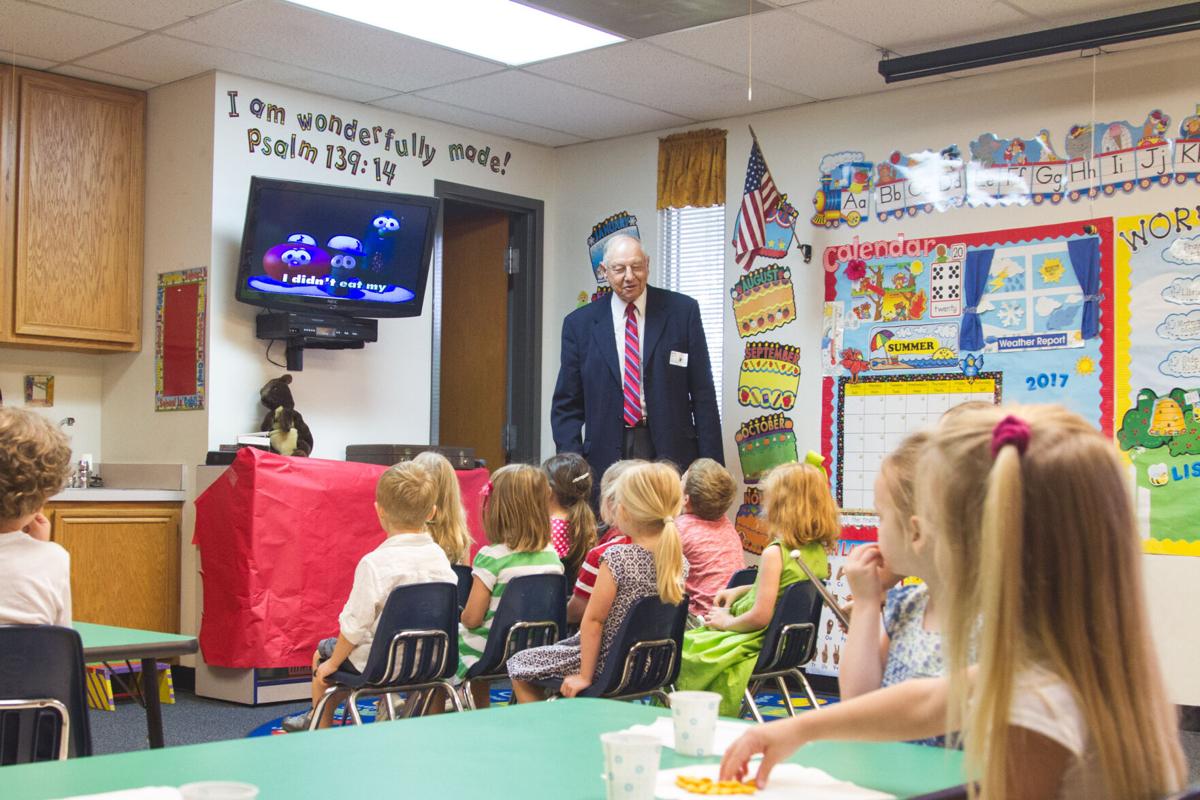 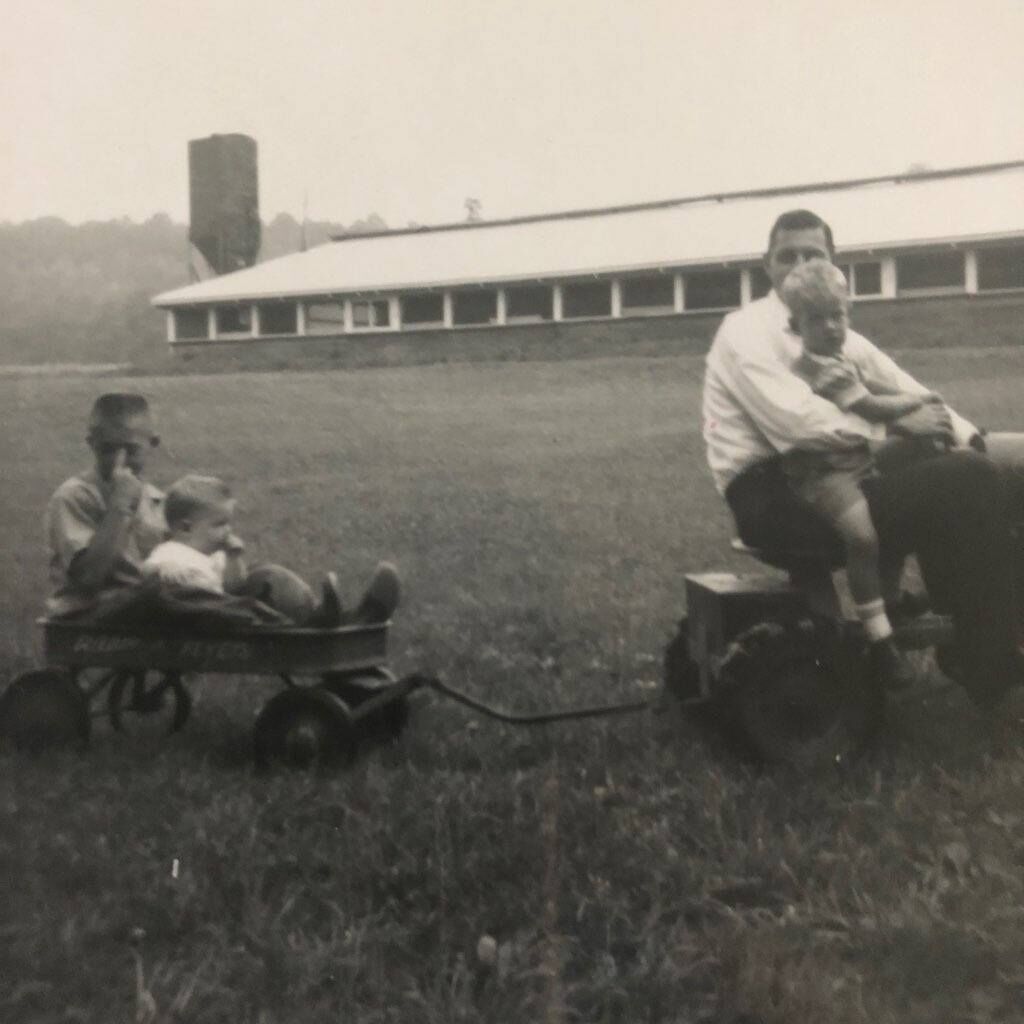 John Sherick, third from left, is driving a tractor with son Bill on his lap, pulling a wagon that includes son Jim, second from left, on brother Jeff Sherick's farm in Willow Street in the 1960s. 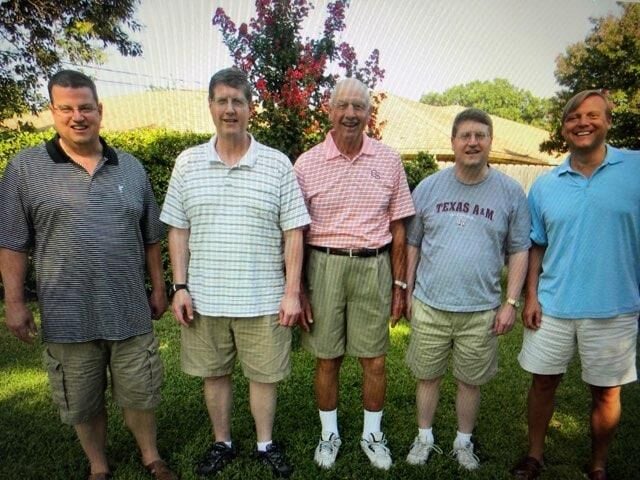 From left to right, Bill Sherick, Jim Sherick, John Sherick, Dan Sherick and Dick Sherick. The photo was taken in 2013 at a family party for John Sherick's 80th birthday. 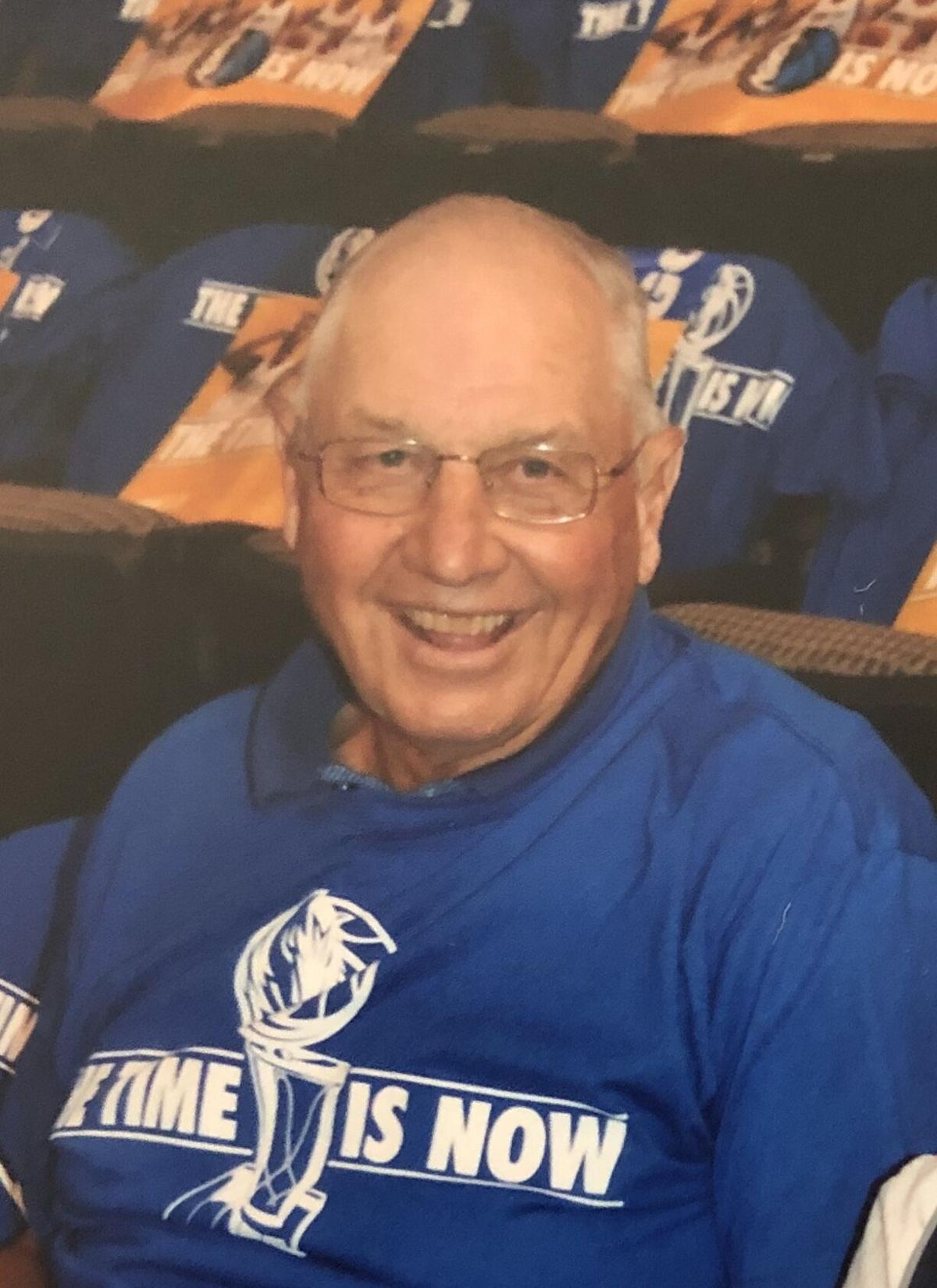 John Sherick last taught Sunday school at Grace Bible Church in Dallas, Texas, on March 15. He didn’t know it then, but it would be the end of his 49 years teaching Sunday school there.

The church has been closed since mid-March amid the COVID-19 pandemic.

Sherick was diagnosed with pancreatic cancer in late March. He was told then he had about three to six months to live. Sherick, at 87 years old, has opted to forgo treatment.

“When I realized I had it, I read about it and learned the chances of having treatment be successful was very slim,” Sherick said. “I could’ve gone the chemo route. But I’ve always said, ‘I’m never going to take chemotherapy. It’s too debilitating.’ The other option was an operation. It would’ve been lengthy and very painful, with a long recovery time. I didn’t feel up to that. Why go through that? I’m a Christian. I’m ready to go. I know where I’m going and that’s all that matters.”

Lessons from the tomato patch

Sherick, the third of four children, is a second-generation Sunday school teacher. His mother, Grace, taught Sunday school at the Washington Boro Church of God before her death in 1967.

“He was always an extremely obedient son,” younger brother Donald Sherick said. “He was always looked at as the most intelligent one of the Shericks. He never did anything he shouldn’t have.”

That’s except for the one time John Sherick got into an argument, to the disapproval of his father, Chester, about creating a church softball team. Or the time, on the dare from a group of friends, John Sherick swam across the Susquehanna River, a boat trailing him in case he needed rescuing.

“Mom and Dad wouldn’t have known about that,” Donald Sherick said.

There were also the occasional tomato fights on the tomato patches of Washington Boro, where the younger Sherick brothers developed their work ethic.

“We still claim that is the reason for our bad backs,” Donald Sherick said. “We learned a lot of life’s lessons in that tomato patch … that hard work will make you succeed in life if you’re willing to do it.”

‘By the will of God’

A bachelor’s degree in chemistry from Franklin & Marshall College landed John Sherick a job with DuPont at its Delaware headquarters in the mid-1950s. Upon moving to Delaware, he first stayed at living quarters at the local YMCA.

“One day I was sitting in the lobby of the YMCA,” Sherick said. “It was the only time in my life I ever did that.”

He noticed a group of people walking through the lobby carrying Bibles and followed them. The group turned out to be a small church body that didn’t yet have a home church and was instead meeting in the YMCA. At the group’s service, a man noticed Sherick and began introducing him to others.

“Can you introduce me to those two young ladies over there?” Sherick asked the man.

One of those ladies, Etna, later became his wife.

“You can see the chances of us ever meeting and getting married was by the will of God,” Sherick said.

The couple married in 1957. Three years later, Sherick’s switched to sales for DuPont and relocated to Dallas, Texas. It was there that John and Etna Sherick raised four boys. All four are now men leading successful careers and live outside of Texas. As a result, they’ve been taking turns visiting their dad over the last four months, done purposely so at least one of them will be there when he dies.

“I wish that everybody in the world could grow up in a family like I did,” son Dick Sherick said.

Brothers Dick, Bill and Jim Sherick run their own California-based commercial equipment business. The fourth Sherick brother, Dan, lives in Virginia and works as an engineer for BAE Systems, with whom he helped design computer software for a rover that is currently on Mars.

“There was no ambiguity about what was important in my dad’s life,” Dick Sherick said. “It was God and family.”

Dallas is also where the Shericks came across Grace Bible Church.

“They knew we had kids in church every Sunday,” John Sherick said, “and saw that we were a couple who knew how to handle kids. They asked us to be Sunday school teachers for six months. At the end of those six months, I liked the kids we were working with, so I kept on.”

On a Sunday morning earlier this year at Grace Bible Church, a girl walked into a classroom where Sherick was about to begin teaching. The girl was wearing a pink dress.

“I like your blue dress,” Sherick said to the girl.

The girl paused and looked at the color of her dress.

The interaction is one of the methods Sherick, who sometimes donned a Veggie Tales tie, used to help children learn their colors. He occasionally did something similar when intentionally forgetting his numbers or the next letter in the alphabet.

“It’s a way to make friends with these kids,” Sherick said.

Other than raising four boys, Sherick never had any formal training when it came to instructing children in a classroom setting.

“It was a spiritual gift from God,” he said. “I seemed to be good at it from the beginning.”

It’s not often Sunday school teachers will stick with it for years, let alone 49 straight, as Sherick has done.

“His breed is gone,” Grace Bible Church pastor Andy Wileman said. “I’m not saying there aren’t any. Most of our Sunday school teachers take the summer off. Or a lot of them rotate every other month. ... We have teachers that care, but not with that single focus like John does. It’s just so unique. We’ll probably replace him with three teachers.”

Grace Bible Church members recently surprised Sherick with a four-minute video tribute thanking him for his service. More than 30 children are included in the video. Here are some of the things they shared about Sherick:

“You do not know your colors or your alphabet.”

“I love how you teach me about God. ... and you were so funny that you didn’t know your ABCs.”

Some people might wonder what others will say about them when they die. Thanks to the video tribute, Sherick now knows. It has provided him comfort as his health is deteriorating, to the point he’ll likely soon need hospice care.

“As I look back, I’m proud of two major accomplishments in my life,” Sherick said. “One of them is the job my wife and I did raising our sons. They’re all very successful. They all love the Lord. ... The other is having taught Sunday school class for 49 years. I’ve had a tremendous effect on the lives of a lot of people at Grace Bible Church.”

Will schools welcome back students to classrooms or go the virtual route? How long will we have to wear masks? Do I have COVID-19 or is that j…

Emma Musser’s experience with Future for Farmers of America was all but guaranteed entering high school, but her involvement with either the g…

Lancaster Mennonite Historical Society, along with 15 collaborating organizations in the United States and Canada, have announced the launch o…

Like many churches across the country, First Presbyterian Church in Lancaster city faced a hurdle when the COVID-19 pandemic forced its doors …

The 37th annual San Juan Bautista Hispanic Festival will look quite different than past iterations.

What would Jesus say today about the #MeToo movement? And what does the Gospel have to say for those who have been affected by the trauma of s…