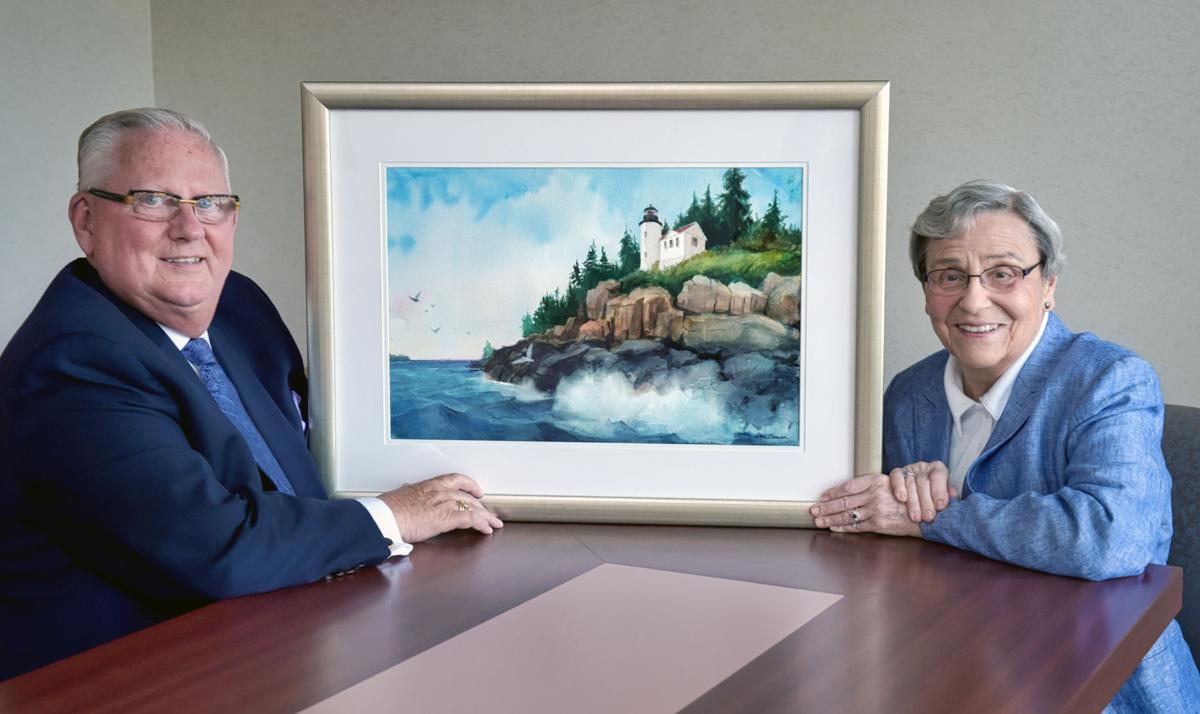 Faye Ziegler, right, shows the "Coast of Maine" watercolor by her late husband, Dale Ziegler, that she is donating to the annual Hospice & Community Care Labor Day Auction. With her is auction chairman Thomas Buter. 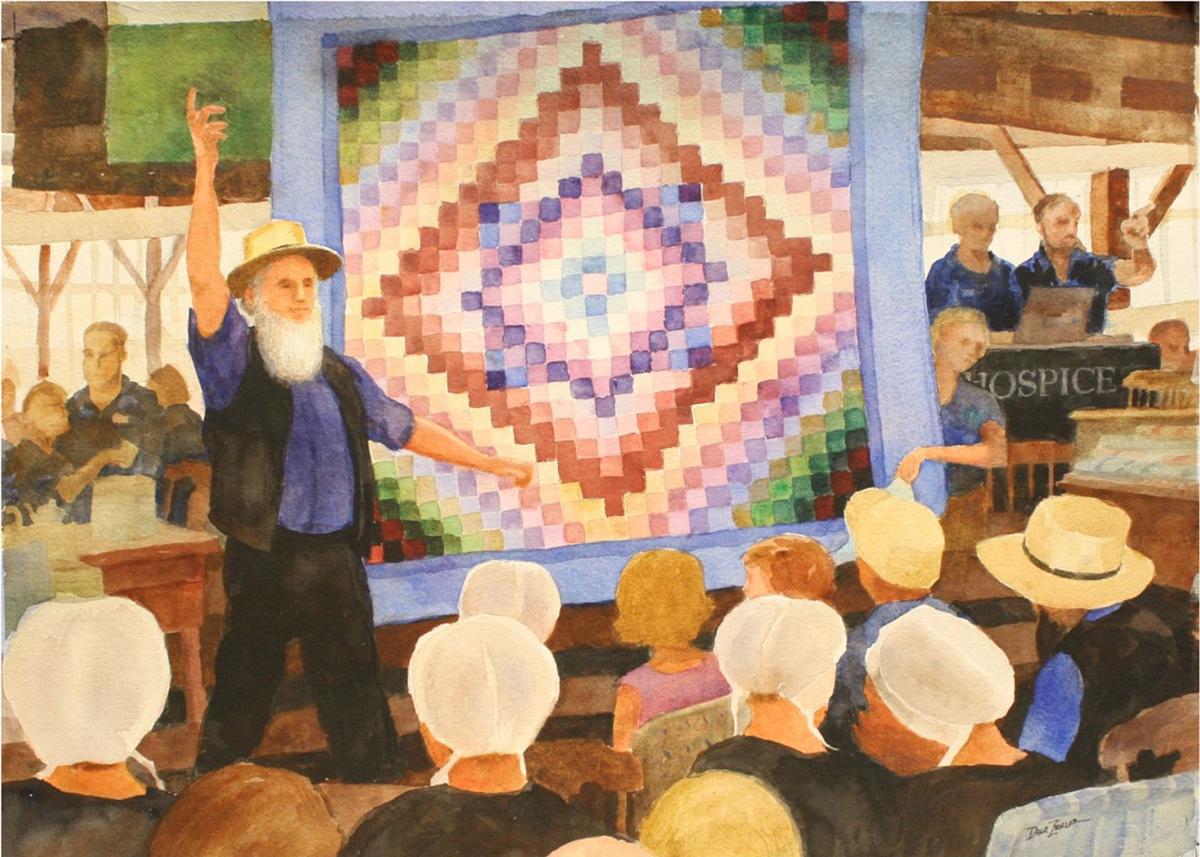 One of 25 prints of the painting the late Dale Ziegler created for the 25th anniversary of the Hospice & Community Care Auction, will be auctioned off this weekend. The painting was inspired by photographs of the annual auction that raises money for hospice services. 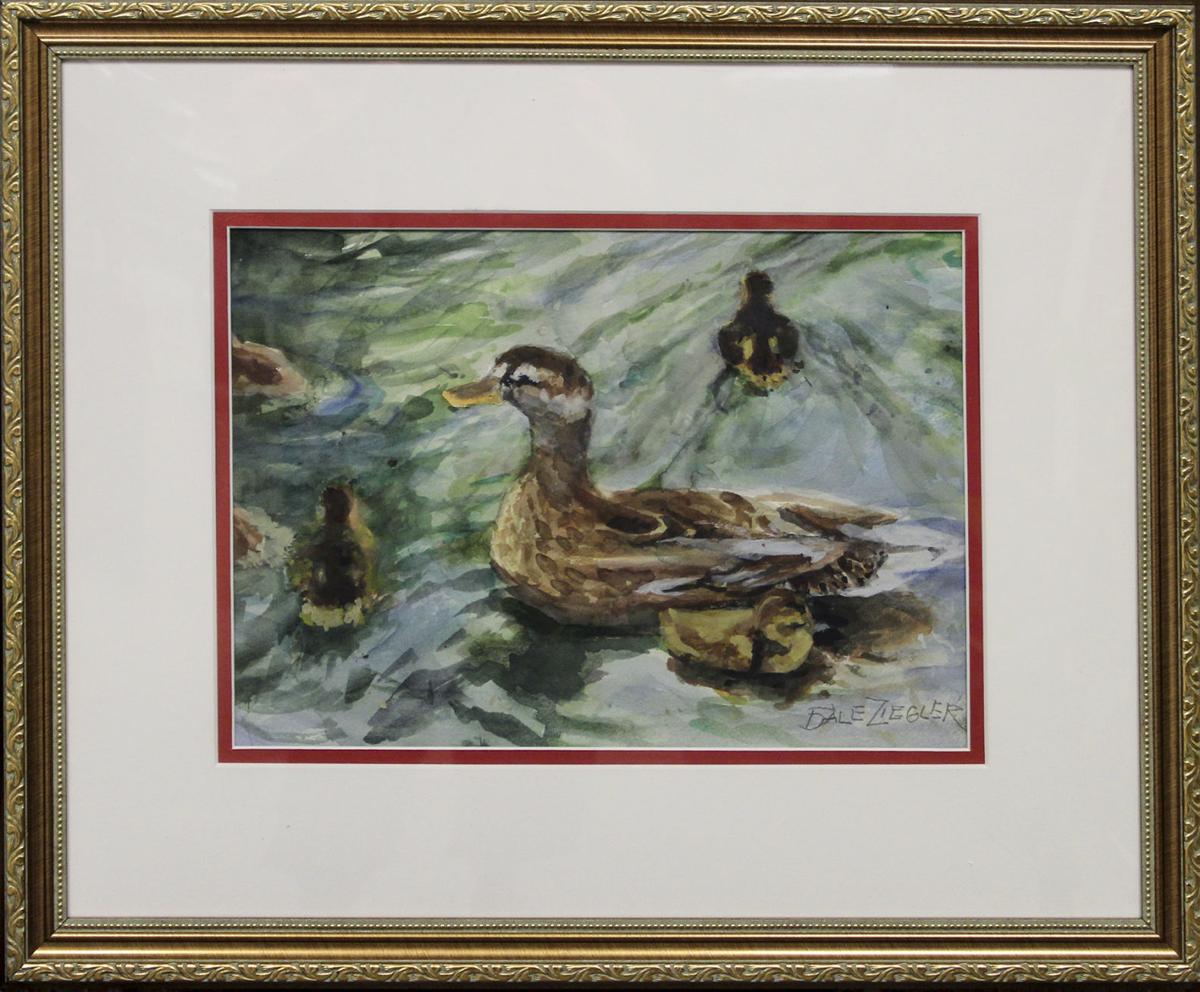 This painting of ducks was made by Dale Ziegler with his left (non-dominant) hand near the end of his life. This painting is being kept in his family. Two other works are being auctioned off at the Hospice Auction.

And, at the end of Ziegler’s life, it was hospice care that helped him continue producing artwork — though he could barely pick up a paintbrush.

“Up until the last two months of his life,” Ziegler’s widow, Faye Ziegler, says, “he was still talking about what he wanted to paint.”

Dale Ziegler, whose landscapes and other scenes of regional life were exhibited locally and raised thousands of dollars for Hospice & Community Care over the years, died in 2016 at age 92.

This weekend’s Labor Day Auction, which raises funds for the nonprofit that provides end-of-life care and support for patients and their families, still will have one original Dale Ziegler watercolor and one print of his work on the auction block.

That’s because his widow, who lives at Willow Valley Communities, wants to continue donating her late husband’s artwork as long as she can.

The art auction takes place Saturday afternoon, on the first day of the two-day auction that concludes Monday.

Thomas Buter, the Lancaster funeral director who has chaired the Labor Day Auction for 25 years, says he first approached Dale Ziegler about donating a painting about 20 years ago.

Someone suggested he ask Ziegler for a donation of an original painting.

“That was a name I had not heard before,” Buter says. “When I asked him, he said, ‘Absolutely.’ ” Buter called on Ziegler for an artwork donation every year after that, and he became a collector of Ziegler’s work.

Faye Ziegler says her husband painted all his life.

“His mother told me that, as a little boy, he was always painting,” she says. “Then, someone gave him one of those little metal strips that had watercolors in it, and he started that.

“He always took a lot of photographs,” she says. “But he never copied a photograph” exactly. “He would use them as reference.”

He painted in his spare time, while working as an art director or creative director for such companies as U.S. Tobacco, she says.

After four back operations, Ziegler says, her husband had trouble using his right side — including his dominant painting hand.

Complications from an infected wound also left him painting from his wheelchair or bed, starting in 2015, in his residence at The Glen at Willow Valley.

“Then, in the middle of February of 2016, he asked for paper and pencil,” she says. “He wanted watercolor paper. I mounted it in quarter sheets on a mortar board.”

For the next few months, nurses and volunteers helped him by bringing him his paints and brushes and holding up the board for him.

Mark Till, who runs Legacy Lifesong Videography and had done some video work for the Hospice organization, trained to become a hospice volunteer.

“I visited (Dale Ziegler) every week or every other week for about six to eight months,” Till recalls.

“He would just start to paint, and I would just be there watching and give him anything he needed while he painted,” says Till, reached by phone in Belize, where he’s working on a video project with an orphanage.

“We talked and conversed a lot while he worked,” Till says. “He was always asking me questions about myself and my videos.”

Because he had trouble using his dominant right hand in 2016, Faye Ziegler says, her husband painted with his left hand — with a little assist from his right.

“He made three good paintings” in that period, she says.

The original Ziegler watercolor to be sold at Saturday’s auction shows a rocky coastline, a lighthouse, trees and white sea spray.

There’s also a Ziegler print on the block this year.

In 2009, Buter asked Ziegler to create a painting in observance of the 25th anniversary of the Labor Day Auction.

The painting of an Amish man selling a quilt at the auction was a composite image made from several photographs of the annual event, Buter says.

The original was auctioned off that year, but Buter asked if he could have 25 prints made of the painting so copies could be auctioned in succeeding years.

“One will be sold this year,” Buter says. “Then, I think we have three left.”

Faye Ziegler says she’ll donate another painting at least next year. After that, she wants to make sure she has enough of her husband’s original works to give to children, grandchildren, nieces and nephews.

It’s clear that painting was a driving passion for Dale Ziegler, even at the end of his life.

“It is a testament to the notion of having a purpose in your life,” Till says. “I think the art, for him, kept him alive a lot longer.”

Amish volunteers give back to Hospice at Labor Day auction, serve up smorgasbord of food

• Food: Lots of baked goods and other food made and served by Amish.

In his Lititz home, Jordan Bleyer has an office space he refers to as his music room.

On recent evenings in Mount Joy, a high school English teacher sings about Cinderella’s desire to go to a royal festival.