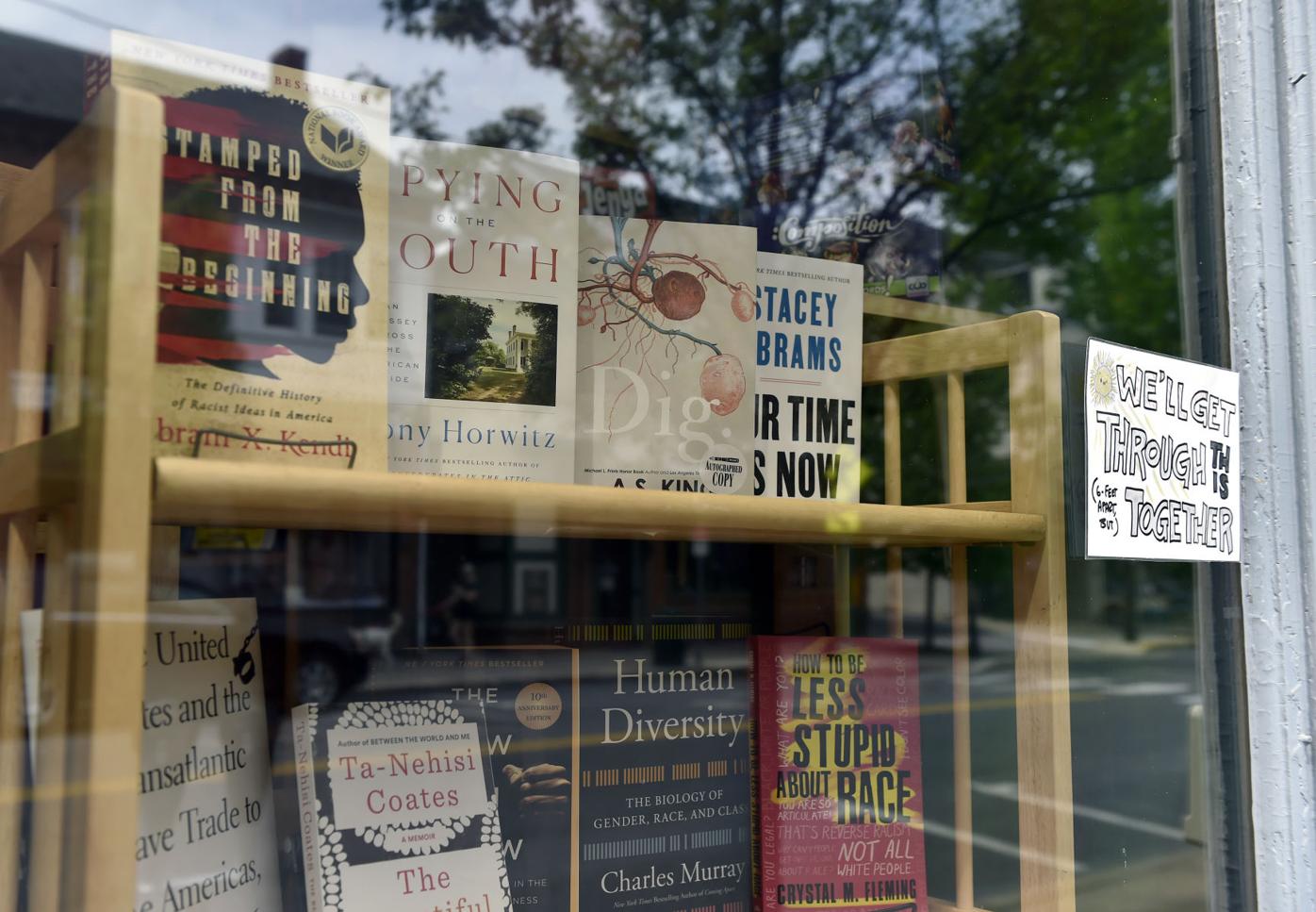 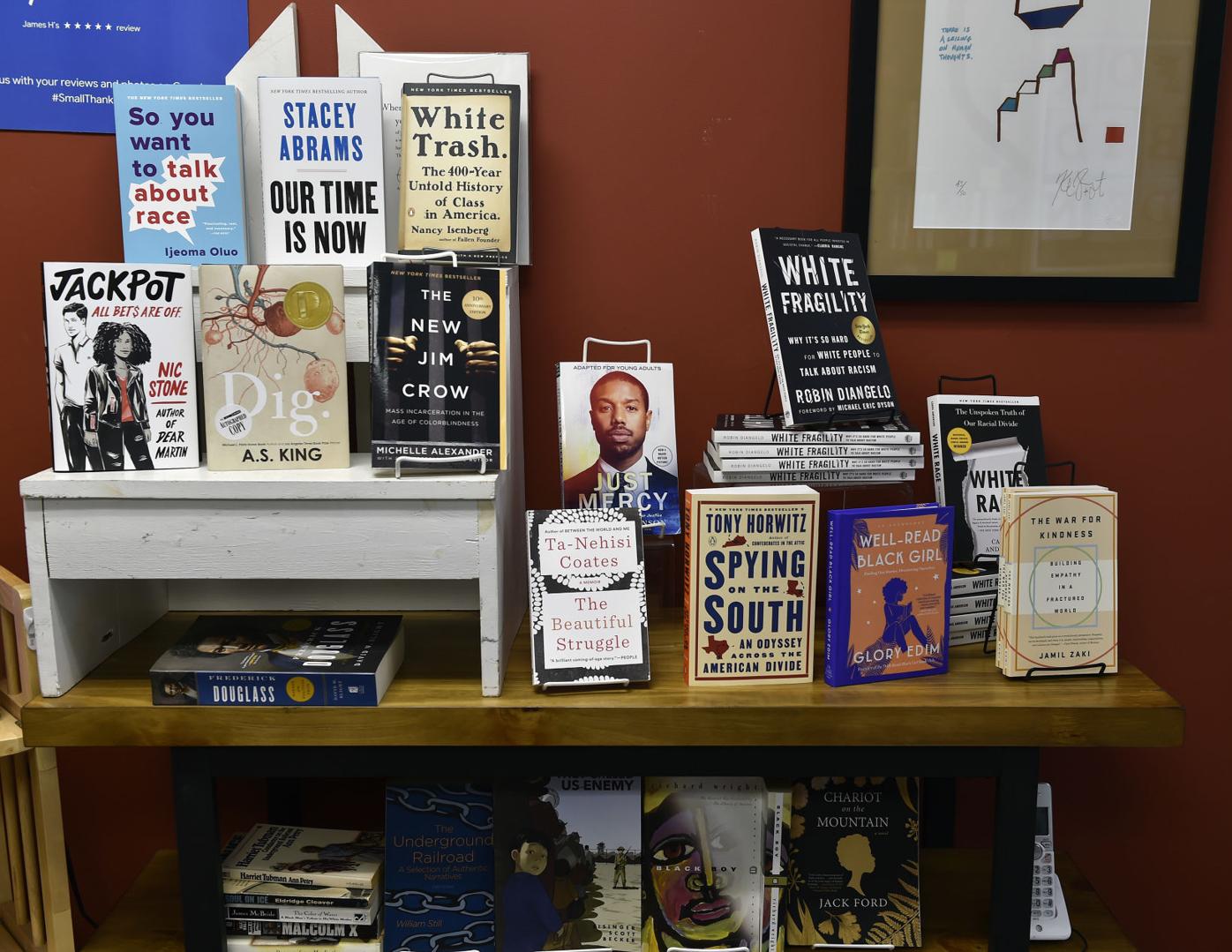 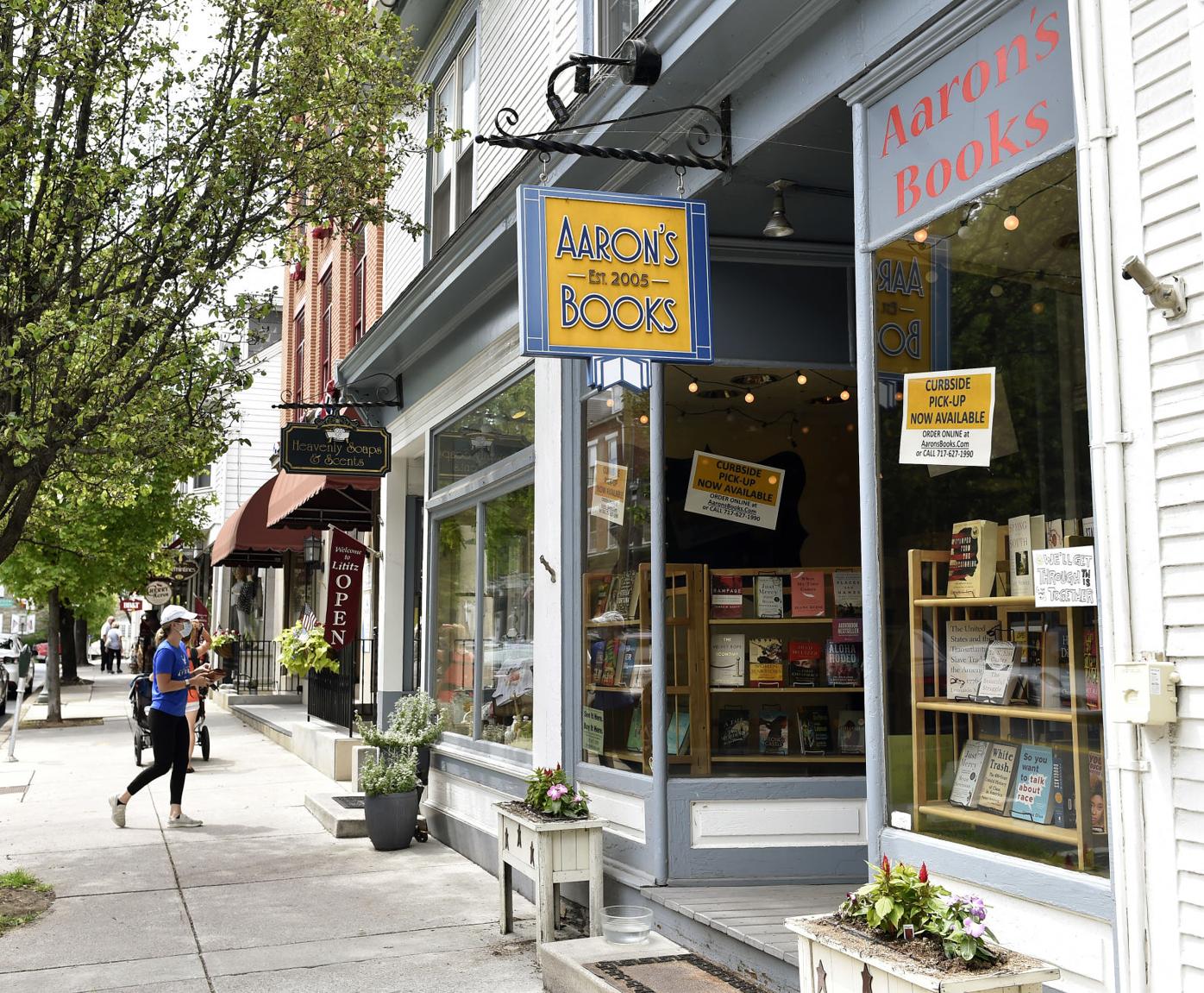 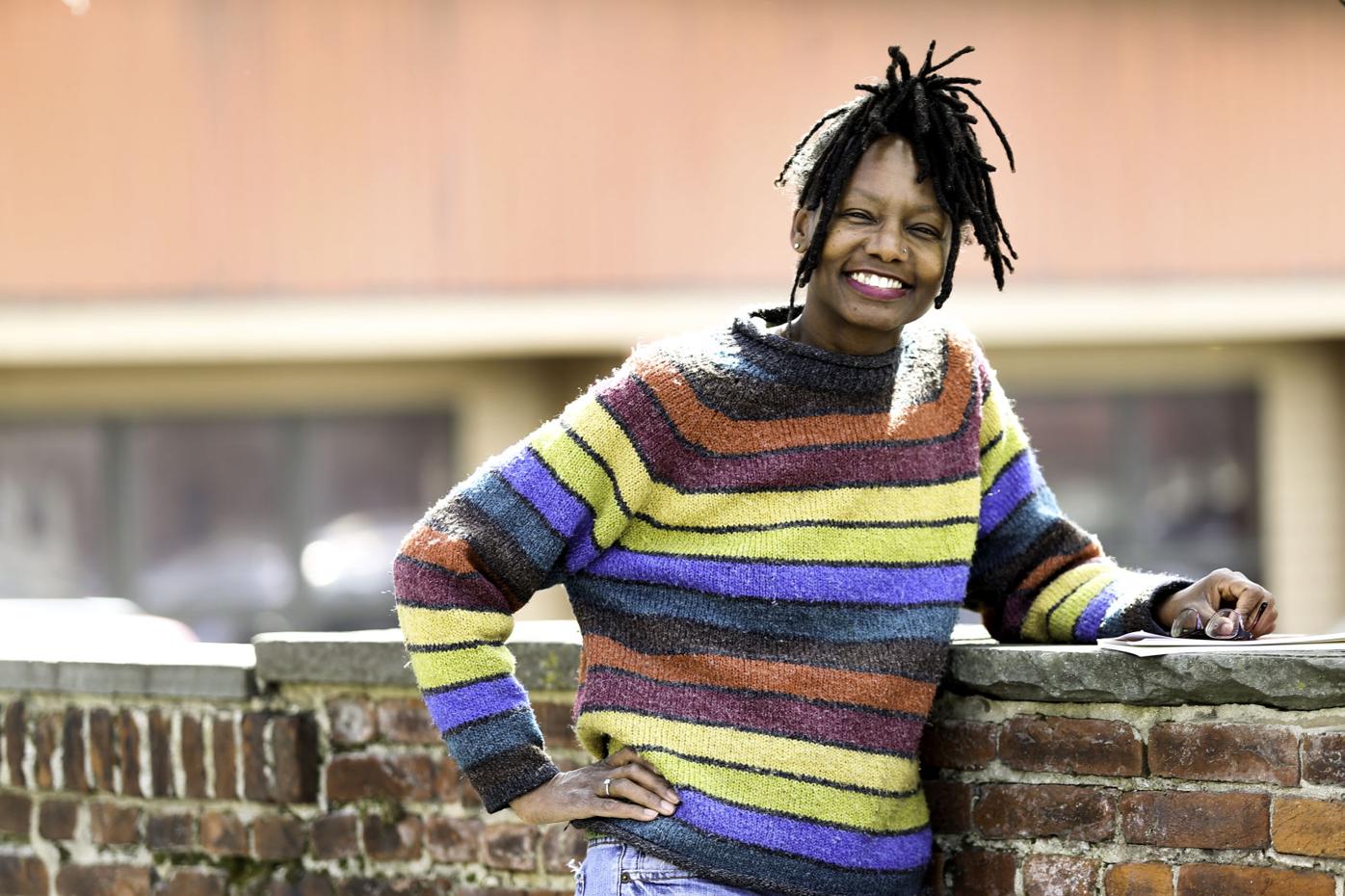 Dr. Amanda Kemp at The Candy Factory in Lancaster on Tuesday, April 10, 2018. Kemp has written a new book, "Say The Wrong Thing." 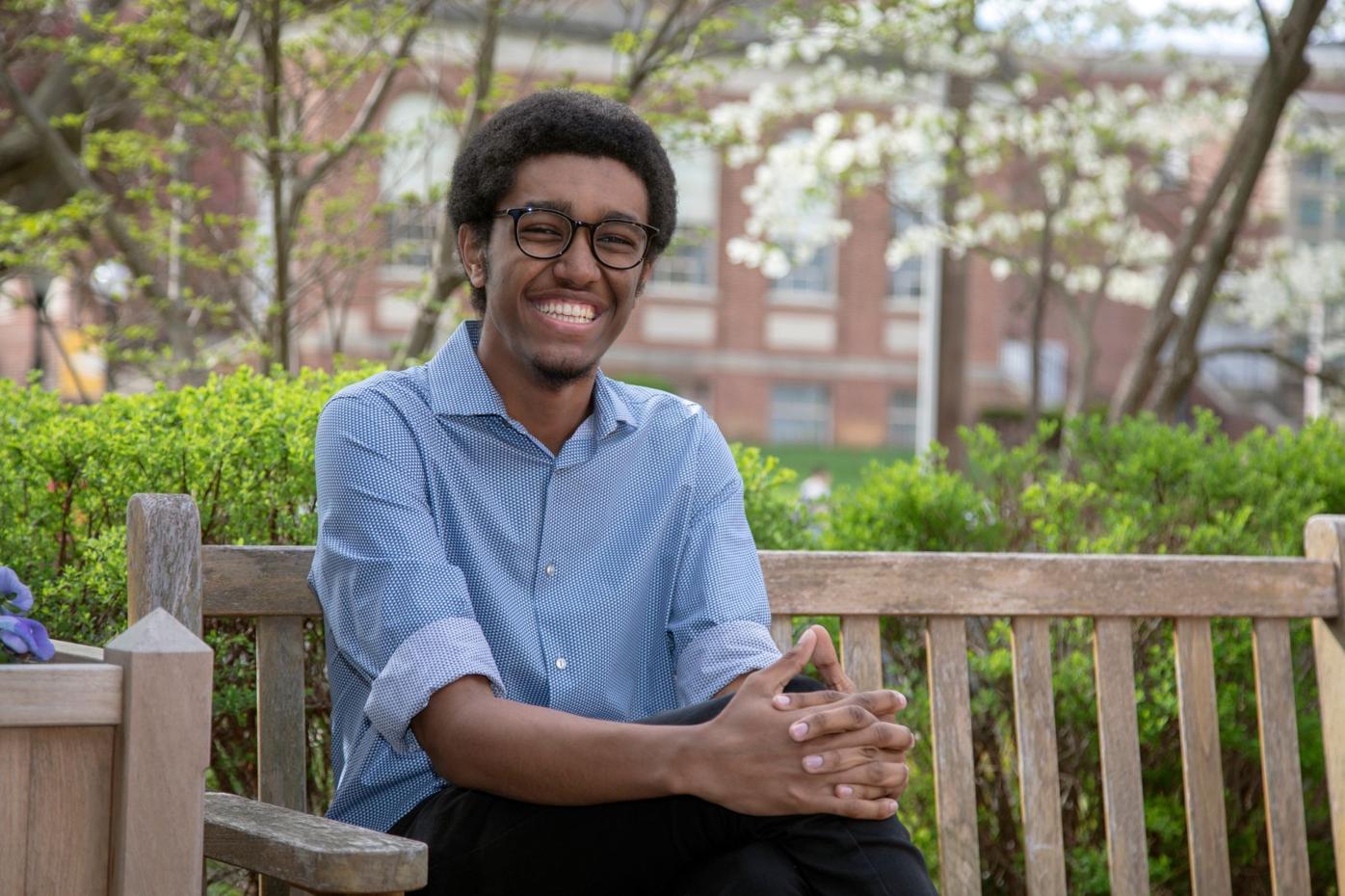 F&M senior Jonny Teklit recently won the prestigious Most Promising Young Poet award given by the Academy of American Poets for his sonnet "Black Mythology." 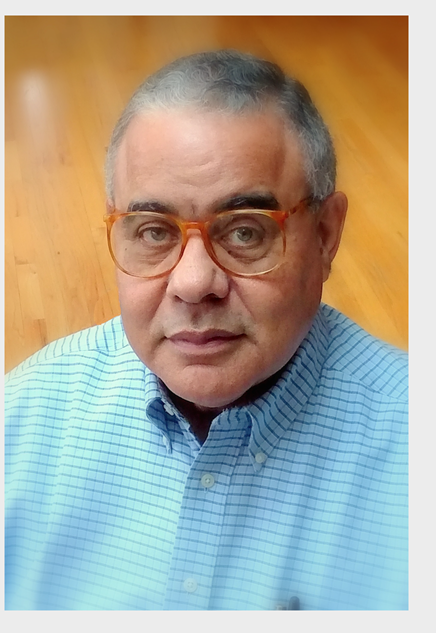 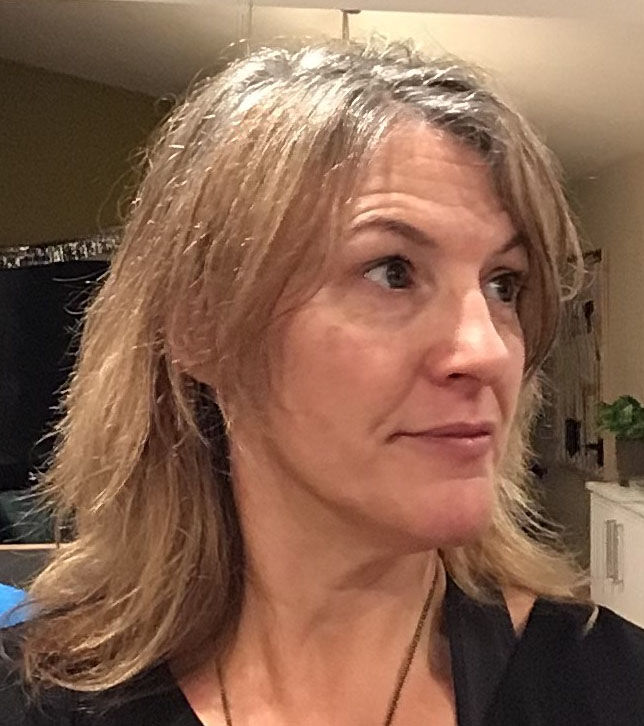 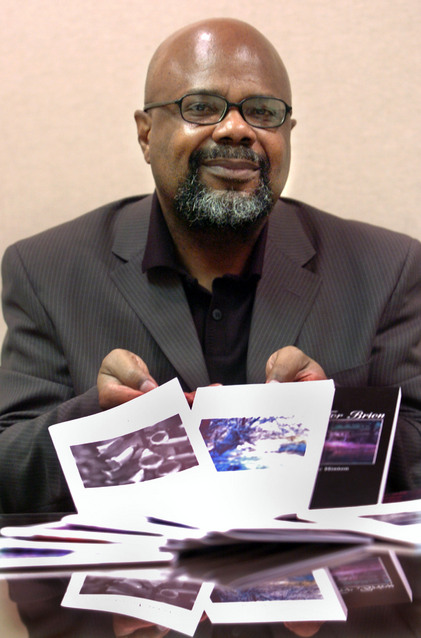 As Black Lives Matter protests continue across the country, booksellers have seen an increase in demand for anti-racist literature and books by Black writers. We reached out to local writers, academics and bookstores for their recommendations.

Le Hinton is a Lancaster-based poet and editor of the literary magazine Fledgling Rag and publisher of Iris G. Press. He is the author of numerous books of poetry, and his latest, “Sing Silence,” was a finalist for the 2015 Big Luck’s Best Prize for People of Color. His poem “Our Ballpark” can be found on a plaque outside Clipper Magazine Stadium in Lancaster. Find more work at lehinton.com.

Hinton shared five books, ranging from fiction to poetry and essay collections, that he feels everyone should be reading.

“The Fire Next Time” by James Baldwin. “James Baldwin is the foremost essayist,” Hinton says. “His words and insight still resonate.”

“The New Black” by Evie Shockley. “Pulitzer Prize finalist Evie Shockley is the present and future of poetry,” Hinton says.

“The Collected Poems of Lucille Clifton” edited by Kevin Young and Michael S. Glaser. “A marvelous collection by one of the greatest poets America has produced,” Hinton says. “In 1988, two of her books were finalists for the Pulitzer Prize.”

“Citizen: An American Lyric” by Claudia Rankine. “This book is quite possibly the most important book written about race in the 21st century,” Hinton says. “Poetry has always addressed social issues.”

Amanda Kemp is a Lancaster-based bestselling author of the books “Say the Wrong Thing,” “Stop Being Afraid” and “Black Girl Magic.” As a poet and performer, Kemp addresses racial justice from a position of compassion and mindfulness. Explore her Racial Justice from the H.E.A.R.T. program, order her books, watch videos and more at dramandakemp.com.

Kemp recommends these seven titles including works of fiction and nonfiction (including one of her own titles) ranging from fantasy to essay collections.

“Children of Blood and Bone” by Tomi Adeyemi.

“My Grandmother’s Hands” by Resmaa Menakem.

“The More Beautiful World Our Hearts Know is Possible” by Charles Eisenstein.

“Stop Being Afraid: 5 Steps to Transform Your Conversations about Racism” by Dr. Amanda Kemp.

Recent Franklin & Marshall College graduate Jonny Teklit began his senior year by being awarded the Most Promising Young Poet prize by the Academy of American Poets for his poem “Black Mythology.”

Think pieces, nonfiction books and essay collections seem like the obvious place to start when looking for things to read about social justice, but Teklit says poetry is the perfect place to find powerful, deep and meaningful thoughts on subjects such as anti-racism and justice.

“After all, poetry is just as viable a genre when it comes to imagining and constructing an anti-racist world,” Teklit says.

“Don’t Call us Dead” by Danez Smith. “Smith’s book is a brilliant intersection of Blackness and queerness and, with beautiful language, it offers a sharp, unflinching gaze at the dangers that imperil both of those identities,” Teklit says.

“Counting Descent” by Clint Smith. “You’ll be hard-pressed to find someone more vocal about racism and the injustice of our current prison industry than Clint Smith,” Teklit says. “His voice — sometimes pained, sometimes tired, but always calling for justice — rings so clearly in his poetry, too.”

“Dispatch” by Cameron Awkward-Rich. “Awkward-Rich’s poems are a balm to the spirit. His poems are beautiful and devastating and Black, through and through,” Teklit says. “His book remembers, honors, and celebrates the Black trans people in our lives, the most vulnerable and forgotten among us.”

Nelligan is the author of a book of poems called “The Ghost Manada” and is the program director for South Central PaARTners — a program that places artists in residencies in schools, senior centers and other community organizations.

“I have a strong interest in social justice and eliminating barriers in the arts that have marginalized creatives of color and many others,” Nelligan says. “That’s become a significant part of our mission.”

“The Black Imagination” by Natasha Marin. “It’s centered around the idea of liberating Black people through the liberation and de-white colonization of the imagination,” Nelligan says. “I reached out to the publishers to see if they’d donate copies I could distribute to Black students in Lancaster, who’ve been nominated by arts instructors throughout the city. They donated 25 copies and have offered to do a Zoom meeting between the students and the artist.”

“Sing Silence” by Le Hinton. “I love Le Hinton so much. He has makes me feel momentarily smarter, because he’s a mad genius. ‘Sing Silence’ is about cotton as it pertains to Black oppression.”

“From Slavery to Freedom” by John Hope Franklin.

“Our customers have been interested in books on racism and the history of race in America for many years,” says Todd Dickinson, co-owner of Aaron’s Books in Lititz. “Titles such as ‘The New Jim Crow,’ ‘Just Mercy’ and ‘The Underground Railroad’ have been perennial bestsellers at Aaron’s Books.”

Aaron’s provides a few recommendations for readers in different age groups you can find on their shelves.

“The Beautiful Struggle” by Ta-Nehisi Coates. “This celebrated memoir by Ta-Nehisi Coates, National Book Award-winning author of ‘Between the World and Me,’ uses his own childhood experience in Baltimore to explore issues involving fathers and sons, and what it means to be a Black boy trying to become a man in America,” Dickinson writes.

“You Can’t Touch My Hair: And Other Things I Still Have to Explain” by Phoebe Robinson. “Robinson is an actress, comedian, and bestselling author who is able to discuss race, class, and gender issues in an honest and hilarious way,” Dickinson writes.

For Teens and Adults

“Ghost Boys” by Jewell Parker Rhodes. “A Black boy is killed by a police officer and his ghost meets others who died before him, including Emmett Till,” Dickinson writes. “And sees how his death affects the lives of others.”

“Hair Love” by Matthew A. Cherry. “Daddy has a lot to learn about styling his daughter’s beautiful hair, with all its kinks, coils and curls,” Dickinson writes.

Aaron’s Books realizes that reading books by Black writers is one way to raise awareness about social injustice, but he adds that directly supporting Black-owned businesses is also an important way to show support. Here are three books you can order from three Black, female-owned bookstores.

“One of the challenges we are learning to embrace is learning to listen to those who have a different perspective than our own,” Dickinson says. “These amazing women are promoting important voices that need to be heard right now, and we are adding these books to our own store’s recommendation lists.”

“Why Are All the Black Kids Sitting Together in the Cafeteria?: And Other Conversations about Race” by Beverly Daniel Tatum.  Recommended by: Noelle Santos, owner of The Lit. Bar located in the Bronx, New York. Website: thelitbar.com.

The Lancaster Public Library recently compiled a list of anti-racist literature. The list, which can be found at lancasterpubliclibrary.org/anti-racist-resources, is accompanied by the following statement: “We believe in the power of books to help create a deeper understanding of the history and impacts of systemic racism, prejudice, discrimination, and inequality. We have compiled a reading list of anti-racist books for young readers.”

The list is grouped into recommendations for children, teens and adults and, for a deeper dive into anti-racist literature, the Bookmobile curated a list of books that can be found at lslc.libguides.com/antiracism/books. Here are three picks from the Lancaster Public Library’s list.

“Rosa” by Nikki Giovanni and illustrated by Bryan Collier.

“The Hate U Give” by Angie Thomas.

“Born a Crime” by Trevor Noah.

Here are three 2020 releases in various genres by authors with Lancaster ties.

“Burglar for Peace: Lessons Learned in the Catholic Left’s Resistance to Vietnam War” by Ted Glick.

Former Lancaster resident Ted Glick tells the story of the Catholic Left — also known as the Ultra Resistance — and his involvement with the antiwar organization during the Vietnam War. Glick details his experiences in the nonviolent resistance movement including stories about breaking into draft board offices, stealing and destroying files and his subsequent prison sentence.

“The Trials of Uwe: Parts I, II and III” by Stephen L. Masia.

Masia’s three-part coming-of-age saga about a wizard striving to overcome obstacles tackles big themes such as death, ego and reconciliation. Masia, a research scientist based in Lancaster, delivers an epic set in a world of wizards, demons, fairies and epic battles that reminds readers that with teamwork and friendship even the biggest challenges can be overcome.

“After the Pandemic: Vision of Life Post COVID-19,” edited by Lawrence Knorr.

Mechanicsburg-based press selected 25 of its authors to speculate on the implications of the COVID-19 pandemic on the future. Authors bring their experience in various fields to reflect on a range of subjects including travel, education, parenting, creativity, the environment, the economy and more.

The June 28 edition of LNP included a story about the Concrete Rose Book Bar, a Black-owned venture that is crowdfunding to open a bookstore and wine bar in Lancaster. Its founders, Evita Colon and Solise White, shared their own reading recommendations. Read more at bit.ly/ConcreteRoseBooksLNP.

Several weeks ago, I woke up in a bad mood. I felt groggy and grouchy, and I didn’t want to get up and start the activities for the day.

Europe has a lot of experience dealing with agonizing history

Sight & Sound Theatres is planning to reopen its show, "Queen Esther," starting Thursday, July 30, with "limited-capacity" seating in the …

How a Lancaster couple in their 20s bought, opened Read Rose Books in just 5 weeks

A lot can change in five weeks.

Look up on any dark, clear night and you'll be greeted with millions of stars.

Why reading can be a form of self-care [column]

Even when we’re not in the midst of a global crisis, practicing effective self-care — making time for joy, rest, and intellectual exploration …

Jericho Brown reads from his Pulitzer Prize-winning poetry book "The Tradition" during a virtual performance hosted by F&M this Saturday.

When the owners of Aaron’s Books in Lititz saw what was happening at the U.S. Capitol building on Wednesday, they decided to offer a way for t…