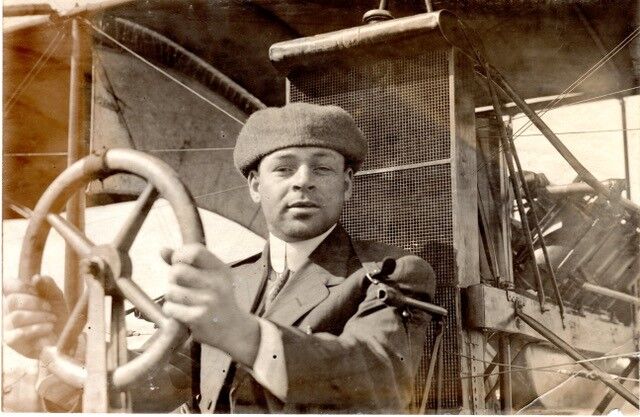 Emory C. Malick is in his official portrait shown from the class of 1912 at the Curtiss School of Aviation in San Diego, California. 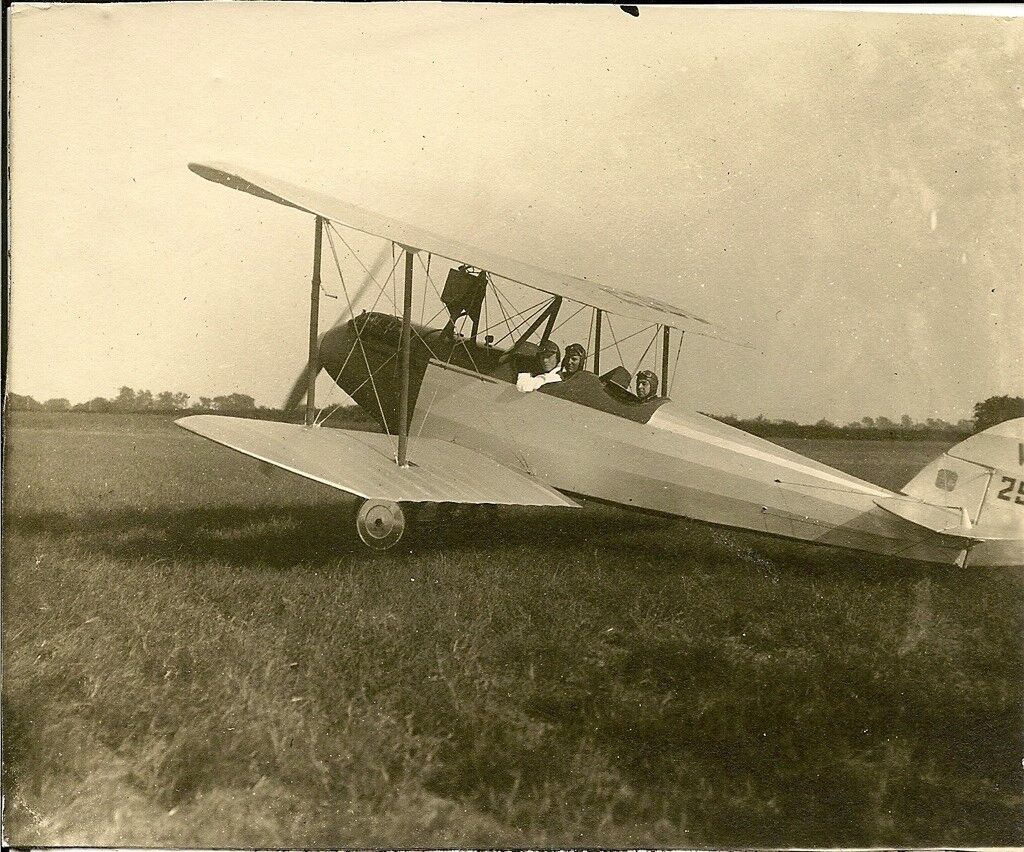 In this photo, estimated to have been taken between 1925 and 1928, Emory C. Malick is identified as the pilot (in the back seat) with two men believed to work with him at Dallin Aerial Surveys and Aero Service Corp. in Philadelphia. 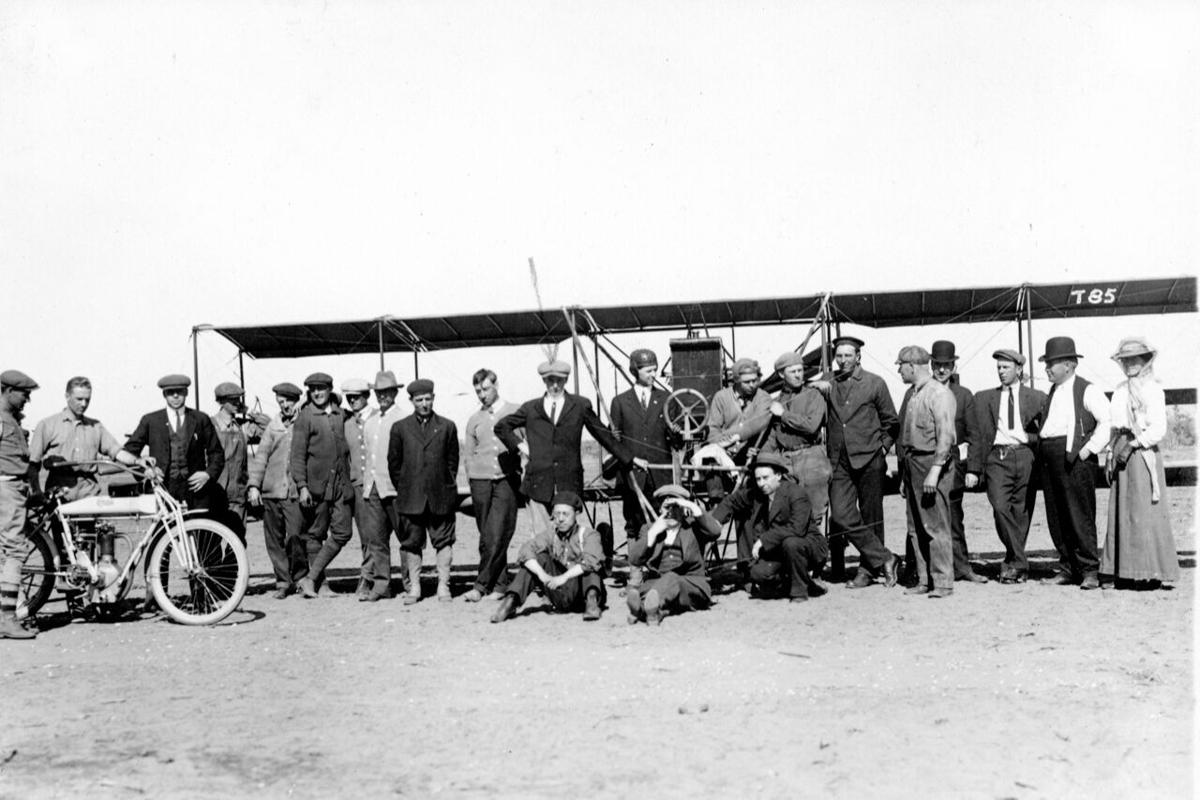 This is the group with which Emory C. Malick trained in 1912 at the Curtiss School of Aviation in San Diego, California. 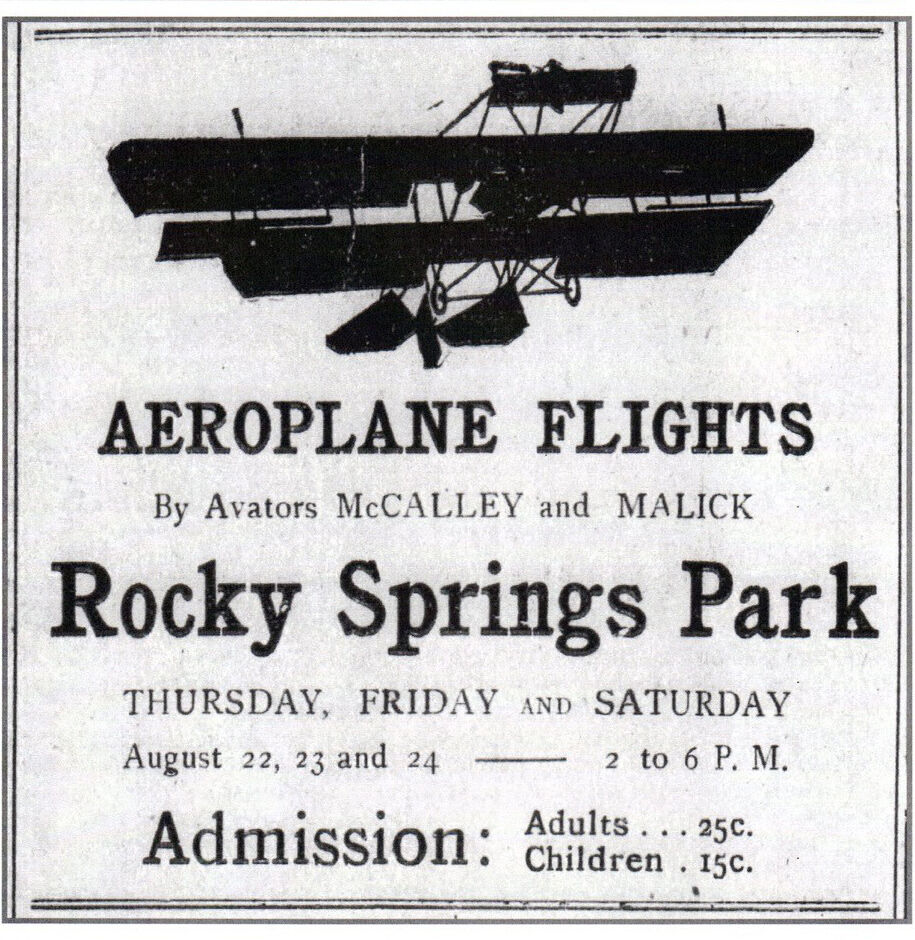 In this  ad from the Lancaster News-Journal on Aug. 17, 1912, biplane flights by Emory C. Malick and Harrisburg's James B. McCalley were advertised for Rocky Springs Park.

Emory C. Malick is in his official portrait shown from the class of 1912 at the Curtiss School of Aviation in San Diego, California.

In this photo, estimated to have been taken between 1925 and 1928, Emory C. Malick is identified as the pilot (in the back seat) with two men believed to work with him at Dallin Aerial Surveys and Aero Service Corp. in Philadelphia.

This is the group with which Emory C. Malick trained in 1912 at the Curtiss School of Aviation in San Diego, California.

In this  ad from the Lancaster News-Journal on Aug. 17, 1912, biplane flights by Emory C. Malick and Harrisburg's James B. McCalley were advertised for Rocky Springs Park.

In 2004, Mary Groce and one of her cousins were going through some old family photographs saved by her aunt.

When they looked at a photograph identified as their great-uncle Emory Conrad Malick, from his time at a California flight school, they were surprised.

Groce and her cousin are white. Their great-uncle Emory appeared in the photo to be Black.

So began a journey through buried family secrets and unheralded family triumphs that has led Groce to begin writing a biography of Malick, an aviation pioneer who lived in Lancaster for a short time.

Groce, of Philadelphia, will tell the story of her great-uncle, whom she believes was the first licensed Black pilot in the country, during an Oct. 18 presentation for the African American Historical Society of South Central Pennsylvania.

The public is invited to join in via Zoom.

Malick received his pilot certification in 1912 after studying at the San Diego, California, aviation school of Glenn Curtiss, one of the founders of the U.S. aviation industry, Groce says

Malick also appears to have been the first to fly biplanes over Northumberland and Snyder counties in Pennsylvania — the area where he grew up. — around 1914, Groce says. His flights, which were said to cause “the wonderment of all,” were documented in newspaper accounts.

In all official records, Malick and other members of his family are listed as white. Some of Malick’s siblilngs had darker skin than others, she says.

But Groce believes Malick’s family was actually of mixed race, but passing as white.

“All I knew about my grandmother, Annie, was that she had been born a Malick and had been adopted at age 2” after her mother died of typhoid fever.

“And I could never get my dad to tell me any more than that.

“I’d say, ‘Tell me about your side of the family,’ and he would say, ‘some closet doors are better left unopened.’ ”

After years of research, and consulting with a genealogist in State College, Groce sent information about Malick to the Smithsonian’s Air & Space Museum.

In 2011, the Air & Space Museum published an article on Malick, titled “Unrecognized Firsts,” saying he appeared to be the the first known licensed African American pilot.

The article caused some controversy at the time, since Malick and his family were listed in official documents as being white.

Groce eventually got a fellowship with the Air & Space Museum, which she will complete after the pandemic, as she continues to work on a biography of her great-uncle.

She also has written two children’s books about Malick, which have been published online through Amazon.

One reason Groce is presenting her family story to a Lancaster audience is that Malick lived in Lancaster for a short time around 1910, when he was 28.

“He is listed as living and working in both Philadelphia and Lancaster at that time,” Groce says.

Advertisements from 1912 in Lancaster newspapers show that Malick and Harrisburg pilot James McCalley did exhibition flights over Rocky Springs Park.

Malick “was the house carpenter at the Webber Hotel in Lancaster,” Groce says. Indeed, the 1910 U.S. census lists Malick among the boarders at the hotel, which was on East King Street.

“He and my great-grandfather, Darius Malick, were both carpenters,” Groce says. She adds they were among the craftsmen who helped build the Pennsylvania Capitol building in Harrisburg.

And they did woodworking on dining and sleeper cars for the Pennsylvania Railroad, she adds.

Groce notes Malick had been interested in flying from the time he was a teenager, working on a farm across the Susquehanna River from his hometown.

He would build his own gliders to take him across the river, she says, and in his 20s he started building his own biplanes.

Malick’s flying career ended in 1928 after two serious plane crashes, the second of which resulted in the death of one of his passengers, according to newspaper accounts.

He died in 1958 in Philadelphia, where he had spent most of his adult life, after slipping on a sidewalk. Groce says his body was unclaimed for a month before authorities located his sister — Groce’s grandmother.

As her research unfolded, Groce, 70, who is retired from her career as a harpist and singer, has found other untold family stories.

There are records of ancestors who were hospitalized for many years in the state psychiatric hospital in Danville, and a great-aunt — Emory Malick’s youngest sister — who died, along with her children, in York during the 1918 flu pandemic.

Groce says she still has plenty of research to do and hopes to visit Lancaster someday, after the pandemic eases, to see what else she can learn about Malick’s time living in the area.

In the meantime, she has been giving talks about her aviator ancestor around the region — now, only online.

“I’m proud to be able to share Uncle Emory’s story, and my family’s heritage,” Groce says.

HOW TO JOIN THE VIRTUAL HISTORY TALK

• What: Historical presentation, via Zoom, on pioneering aviator Emory Conrad Malick, by his great-niece Mary Groce.

• How to participate: The public can register by sending an email to the presenting organization, the African American Historical Society of South Central Pennsylvania, at aahs.information@gmail.com. Participants will be emailed the Zoom link for the presentation.

• Cost: The society is asking nonmembers to contribute $5, paying via PayPal or sending a check, by visiting aahsscpa.org.

Here's what people are buying at home goods, home improvement stores and more

A guide to eight varieties of locally grown winter squash, including neck pumpkin

The Lancaster Mennonite Historical Society will present Family History Heyday, a new one-day virtual genealogy experience for everyone from c…

The leaves may still be on the trees, but the holidays will be here before we know it.

Were you too busy enjoying your weekend to check in with the news?