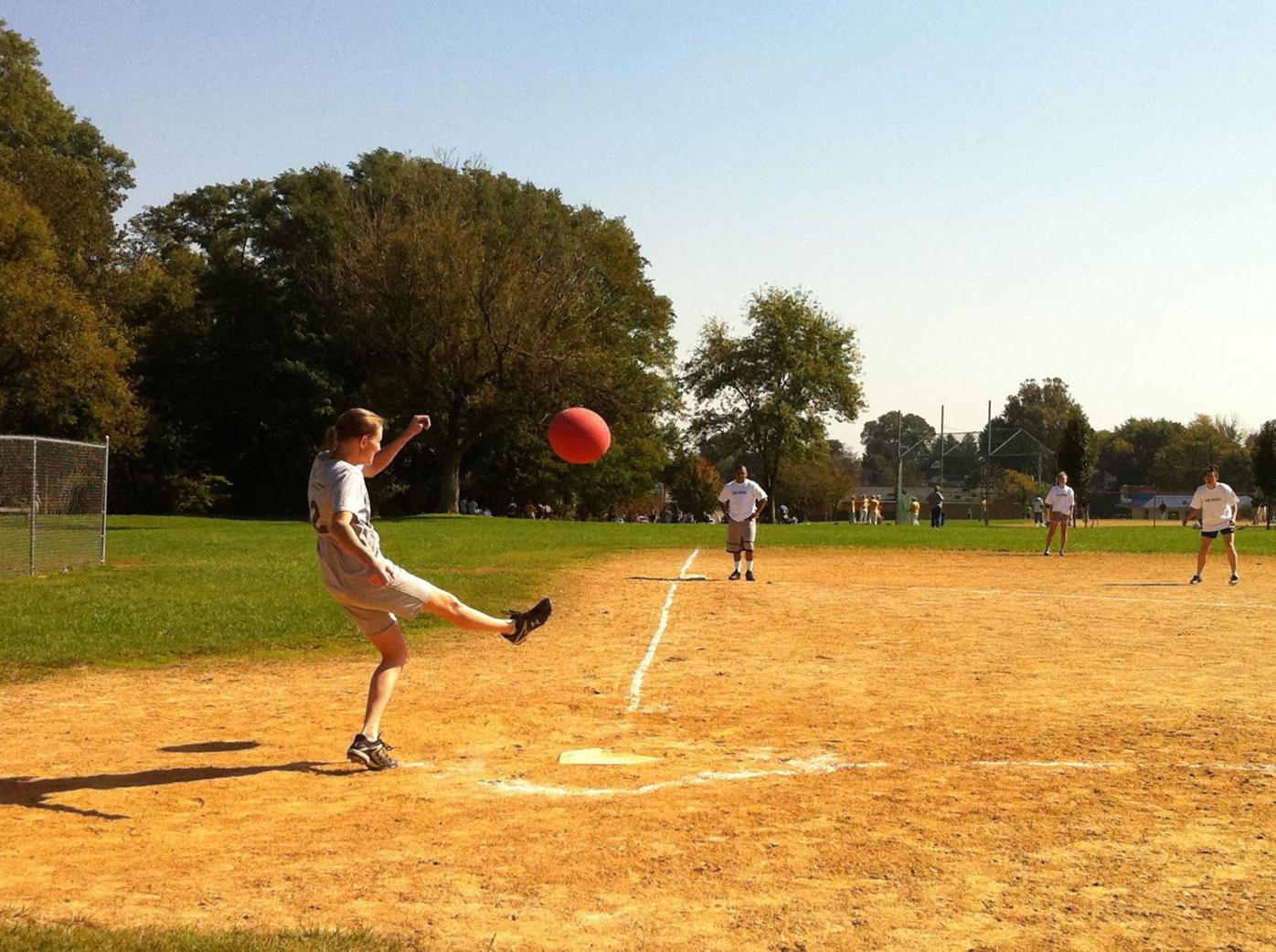 Lancaster Recreation Commission has not had an open spot in the adult coed kickball league since it started. 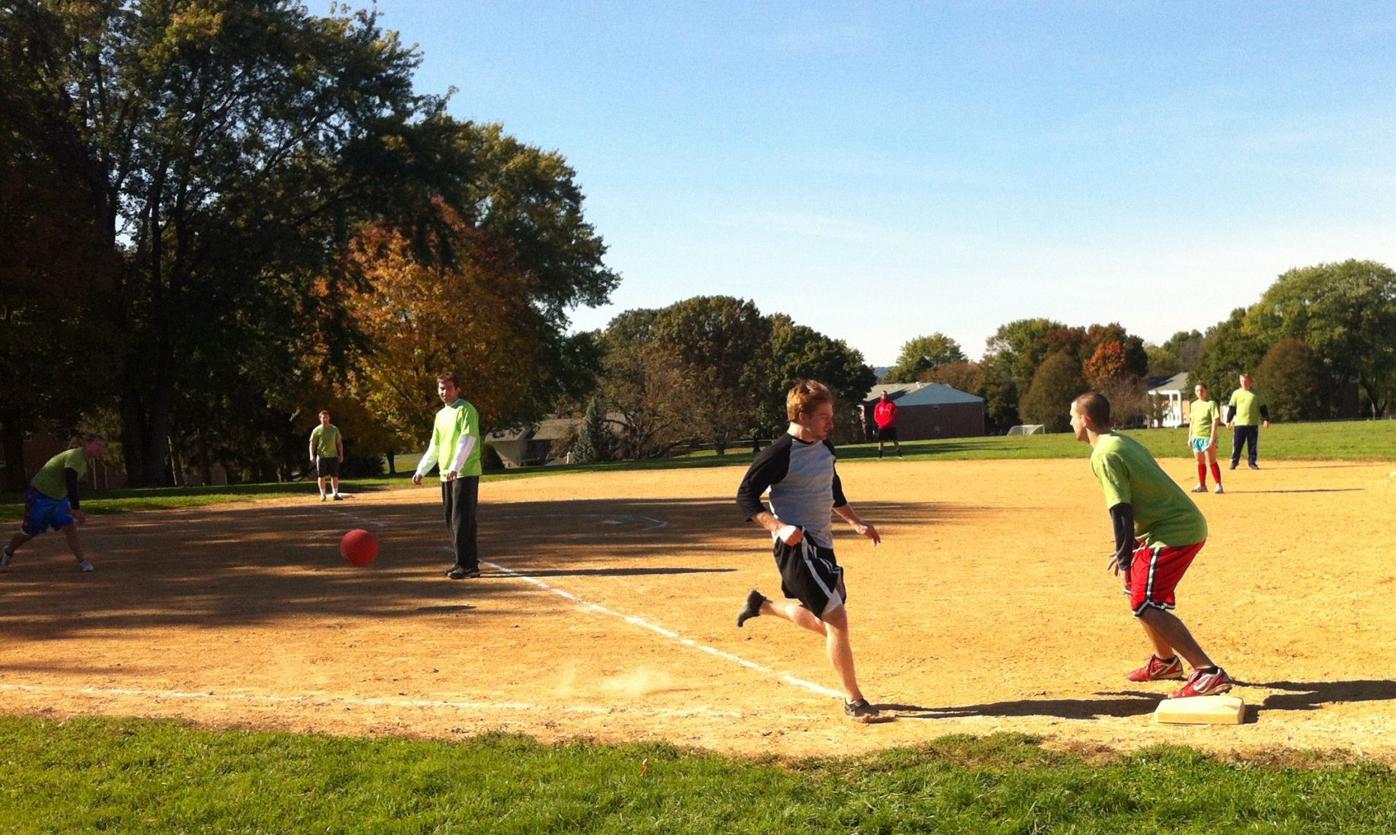 Round one of the fall season pits the Alcoballics vs. Sit On My Base. Later, Shared Hitless kicks off against One Kick Wonders and then Kick in the Grass faces Jesse and the Rippers.

Adult kickball is back.

This playground sport is no longer just for kids looking to burn off some energy during recess. Lancaster Recreation Commission has already filled up its roster for the fall season and Lancaster Young Professionals fielded 300 people in its first kickball season.

The fall season starts this month for kickball athletes who like a sport in which it’s perfectly fine not to be the biggest, strongest or fastest.

“The ball they use is the big giant ball. When you have the strongest guy kick it, it doesn’t go far either,” says Tim Eckert, a team captain. “It’s kind of the great equalizer.”

Softball still reigns as the most popular league, with about 75 coed teams signed up for the spring and fall seasons. A dodgeball league came and went but the eight-team kickball league still sells out weeks in advance.

“People going back to their playground roots,” Lander says.

Teams play each other during the two-month season and then start the playoffs.

Eckert’s team, Sit On My Base, is going for a seventh championship this fall.

“Kickball is one that’s a little bit easier. People of all skill levels can enjoy it,” he says. “And it’s fun playing in a league to meet people. We often go out to get drinks with another team after a game. You get to meet more people that way, too.”

The team he captains has a roster of 20 players, more than enough to field a team of 10. As teammates started families or had other obligations, they’ve left and new players have replaced them.

Eckert’s team hadn’t lost a game until last year, when it finally was beaten.

The team’s players may have grown older (they’re now 25 to 34), but they have experience on their side. They know strategies, Eckert says, like don’t try to kick the ball far and place the ball where the other team isn’t.

Lancaster Young Professionals started a kickball program in the spring as a way to kick off its sports leagues.

Not everyone’s comfortable going to a networking mixer or a professional development session, says sports commissioner Brock Snider. A sports league is a way for people to get involved with the group.

LYP started with kickball because, “You can only be so good or so bad at kickball,” Snider says.

“We thought if we could get six, that would be phenomenal,” Snider says. “We ended up with 14 teams and over 300 people.”

The group has “young professionals” in the name but people in their 40s and older also signed, and the players include plumbers, electricians and firefighters.

At the beginning of the season, most looked like they hadn’t played since third grade, says Snider, who was a referee.

The group is looking into adding more sports, like volleyball or bubble soccer.

When: Games are Thursday nights at Lancaster County Park, Sept. 21 through Oct. 26, with playoffs the first two weeks of November.

Cost: $50 per player. LYP members get a $25 discount. Free agents will be assigned a team.

When: Games are Thursday nights at Conlin Field and start Sept. 7.

More information: The fall roster is filled. If the agency hears enough people are interested, another night might be added. Call 717-392-2115. Otherwise, sign up for fall 2018 in June or July.