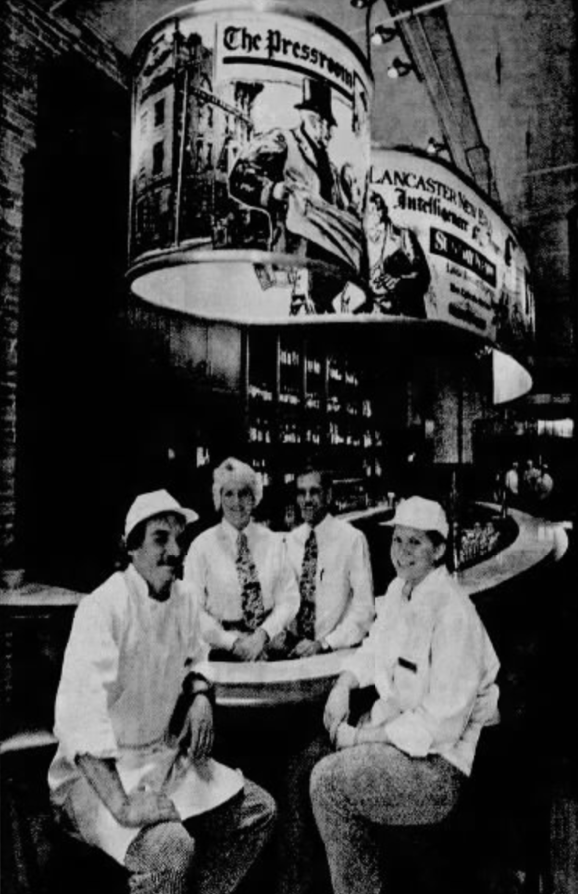 Executive chef Jeff Seitzinger and sous chef Kirsten Funke take a seat in the new Pressroom Restaurant, while managers Missy Anderson and Greg Flory stand behind the bar in this 1995 photo. 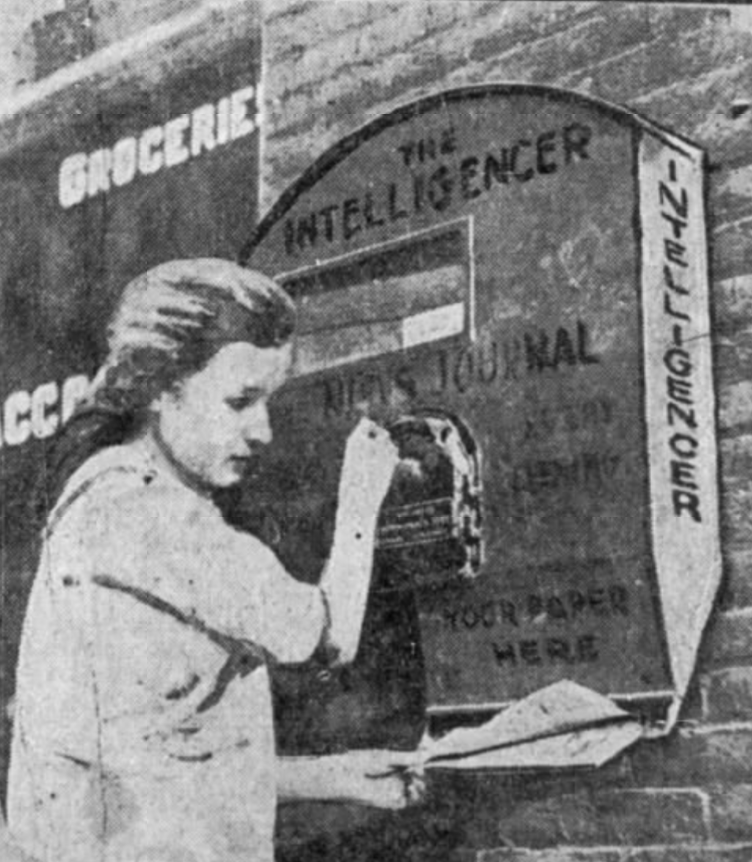 A woman operates one of Lancaster's first self-serve newspaper boxes in this 1920 photo.

The summer of 1995 saw the opening of a restaurant that has since become a staple of the downtown Lancaster dining scene.

The Pressroom was ready to open in the King Street location that was once home to Steinman Hardware. Owned by Lancaster Newspapers, Inc., the restaurant was decorated with newspaper imagery and paraphernalia, and the sandwiches bore the names of characters from the comics pages, such as Ziggy, Woodstock and Heathcliff. The menu also featured pastas, brick-oven pizzas and a variety of other lunch and dinner entrees.

The Pressroom has since undergone a massive reinvention, and while the decor still nods to the history of print journalism, there are no cartoon characters represented on the menu.

O.J. defense goes to the dogs

Rare white deer, automotive arson and a set of twins born in different towns [Lancaster That Was]

A 9-year-old Columbia boy sustained severe injuries in 1970 when a bomb he was apparently constructing in his bedroom went off.

The boy was in his second-floor bedroom while his parents wee out for the evening and a babysitter was in the first floor of the home. The babysitter heard a "shotgun-like" blast and ran upstairs to find the boy injured and barely conscious. He was rushed to the hospital for injuries that included the loss of three fingers from his right hand, as well as shrapnel injuries to his face and right leg.

Police said the boy's parents were unaware that he had been experimenting with explosives.

There are 27 drive-in theaters in Pennsylvania, none in Lancaster County: here's where they are

A strange reunion was reported on the front page of the July 12, 1945, Intelligencer Journal: A local man was reunited with a turtle he had met 56 years earlier.

M.K. Priest, walking through the woods of Little Britain Township near his boyhood home in the summer of 1889, found a turtle and etched his name and the date into the animal's shell before releasing it.

More than a half century later, the turtle was found by Levi Eckert, who lived near Priest's former home. Eckert tracked down Priest, who had by then moved to Lancaster city, and arranged to bring the turtle to him.

Priest made a home for the turtle in his yard - and even brought in a female turtle to keep the old creature company.

Truman will not meet Churchill before Potsdam

Charges Hollywood is headquarters for plot to overthrow U.S. government

In the summer of 1920, the Lancaster Intelligencer announced that a new circulation venture had been a great success over the previous couple of months.

Self-serve newspaper boxes were on the streets of Lancaster for the first time, distributing both the Lancaster Intelligencer and the News Journal. Eight boxes had been placed around the downtown area, and more were planned to be set up in the near future.

No disorder during parade in Ireland

A soap box derby champ, a bizarre lightning strike and an all-new Route 30 [Lancaster That Was]