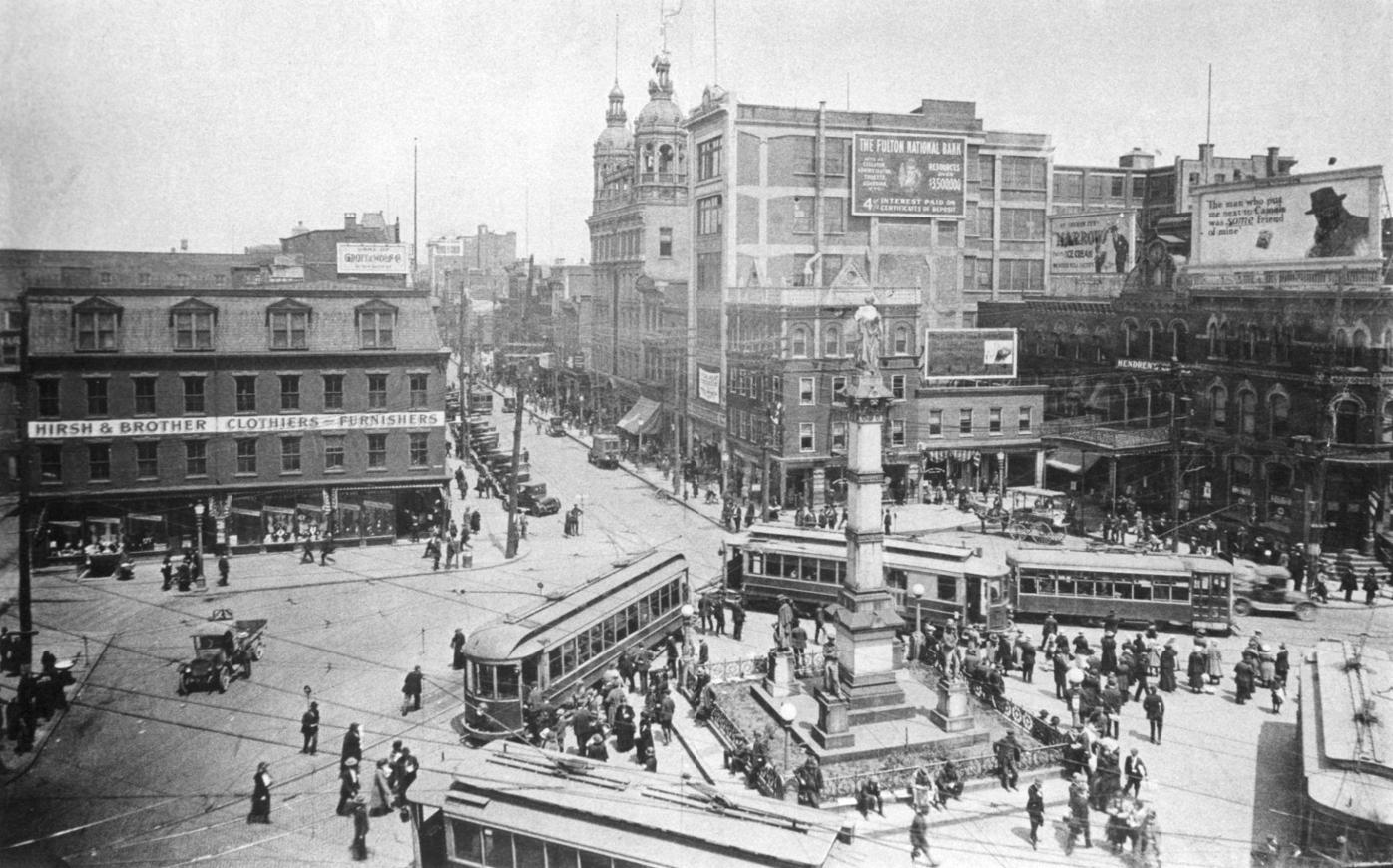 This is a 1913 file photo showing some of the retailers around Penn Square in Lancaster. 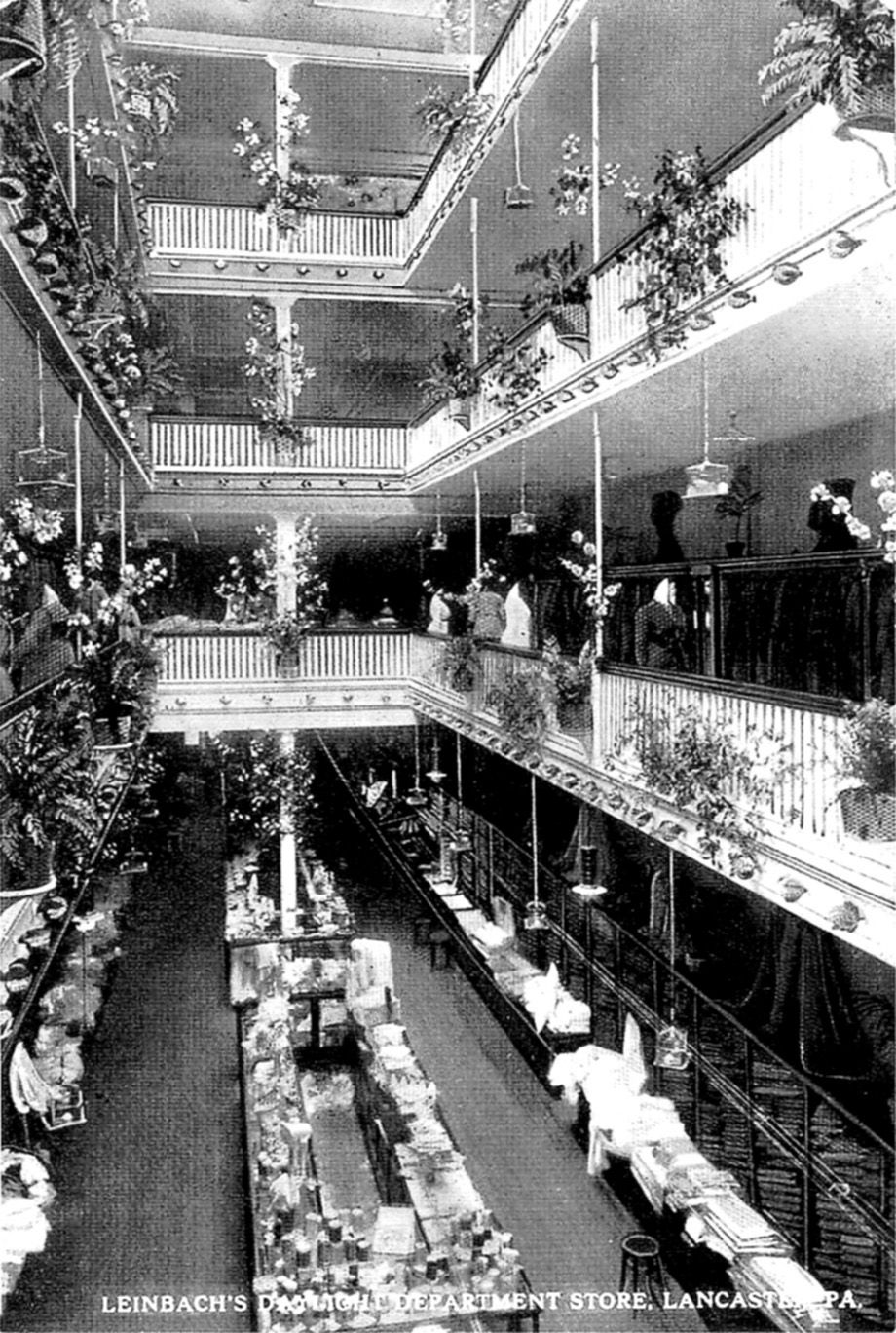 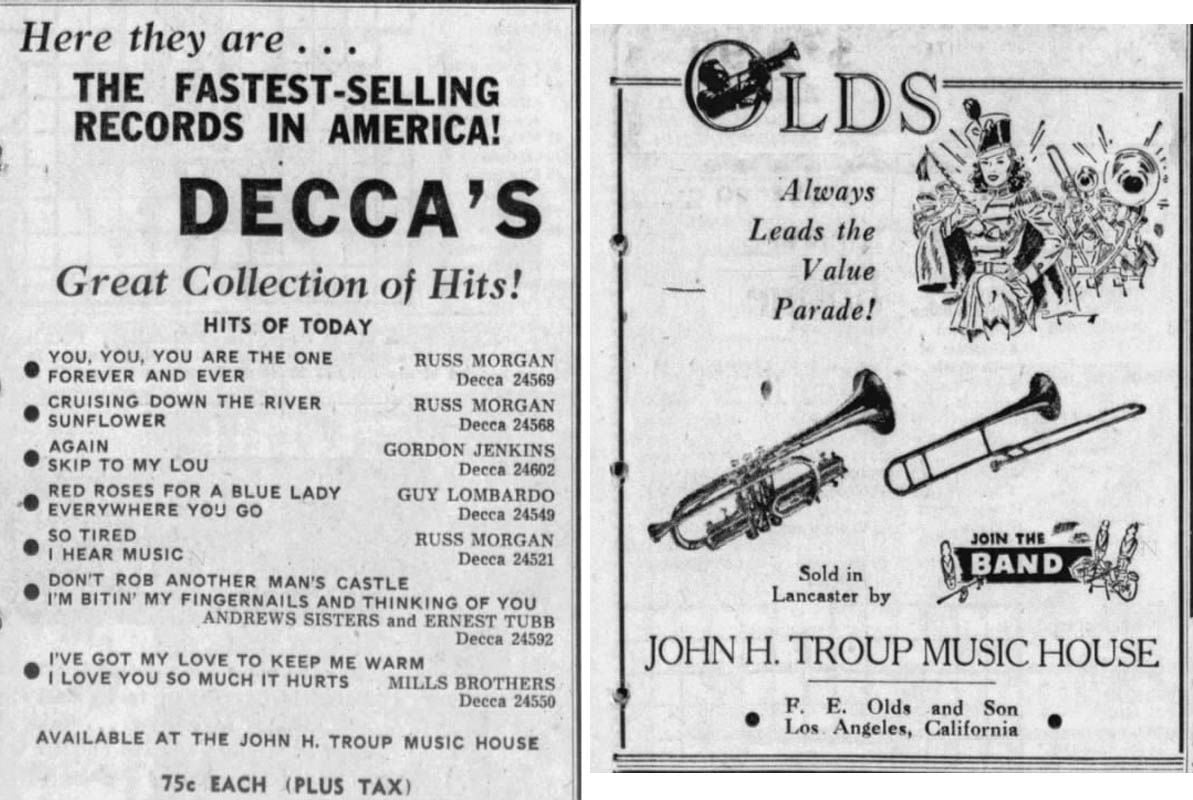 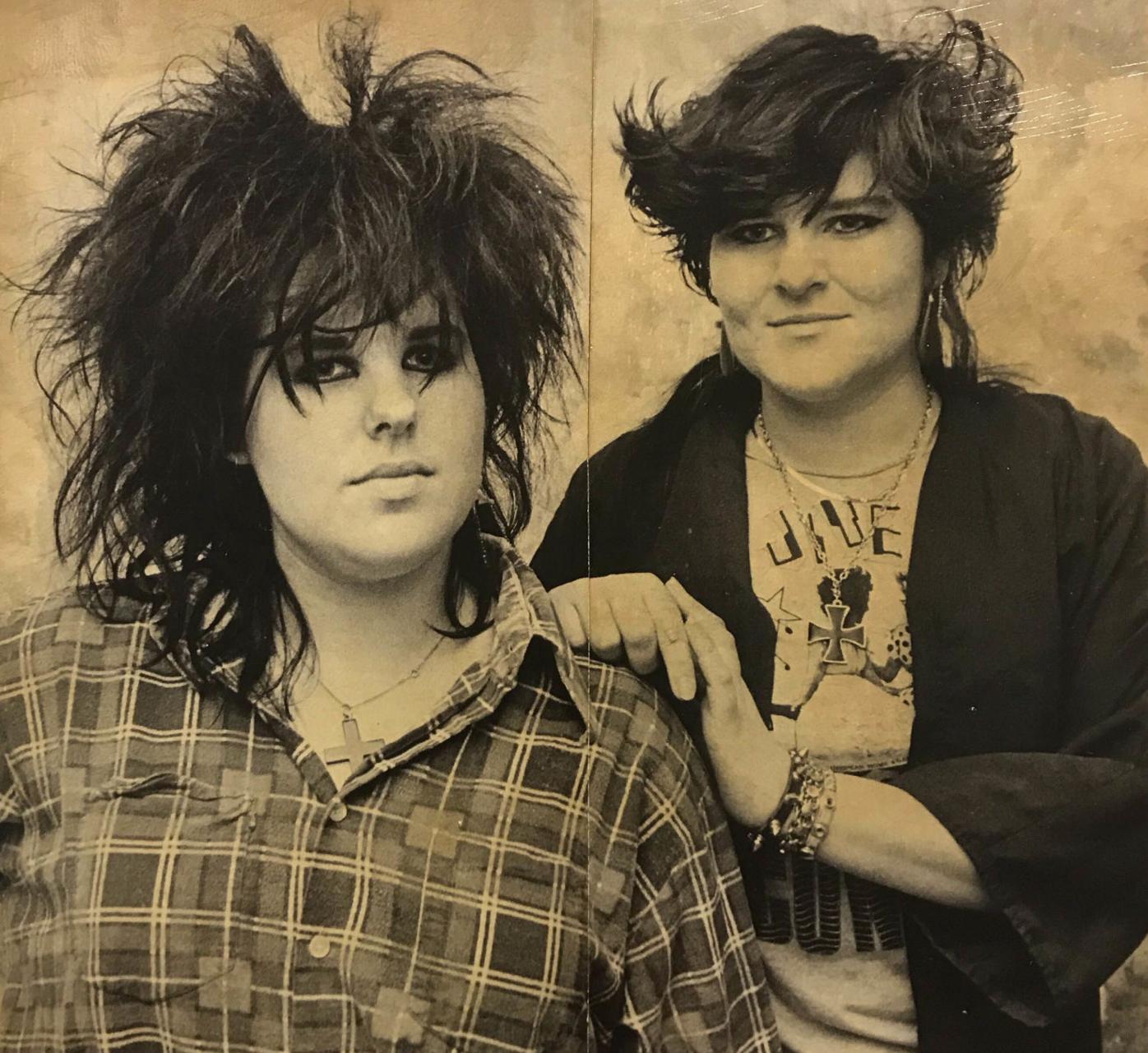 Suzanne Cotton, left, and Laura Cotton opened the punk shop State of Confusion on West King Street in the 1980s. 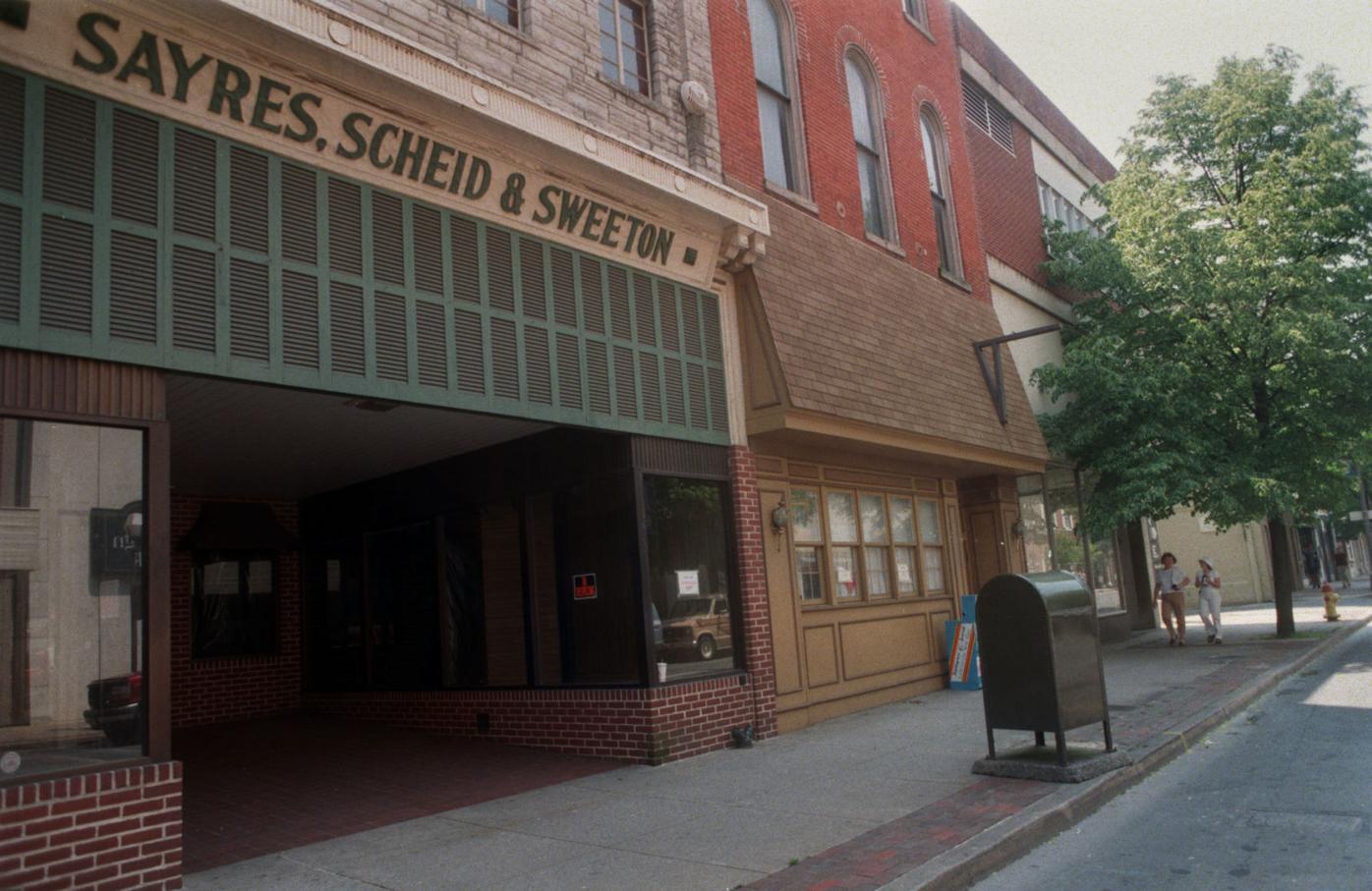 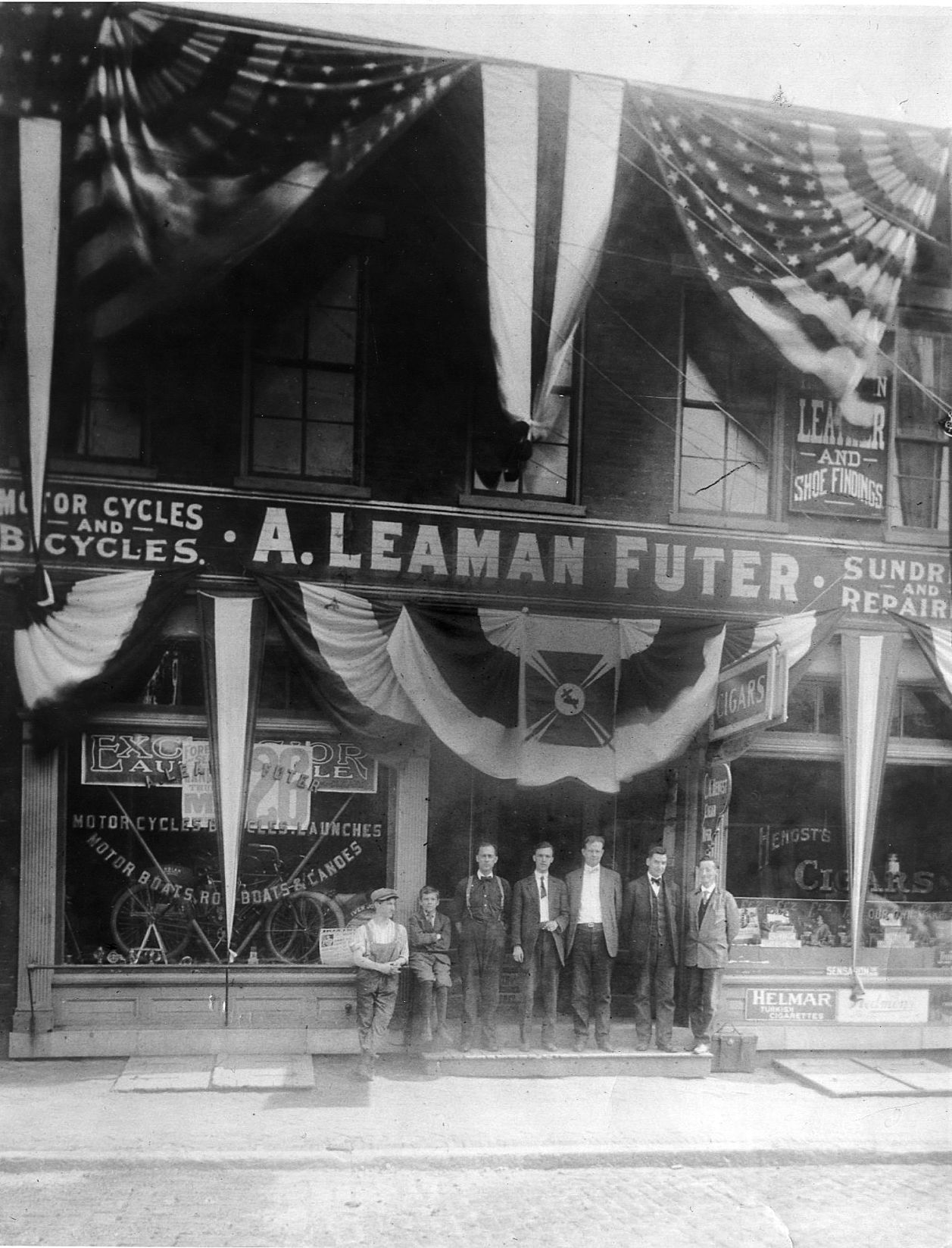 The staff of the former A. Leaman Futer bicycle shop, creator of the Futer Flyer,  stands outside the shop at 24-26 E. Chestnut Street in this undated file photo. 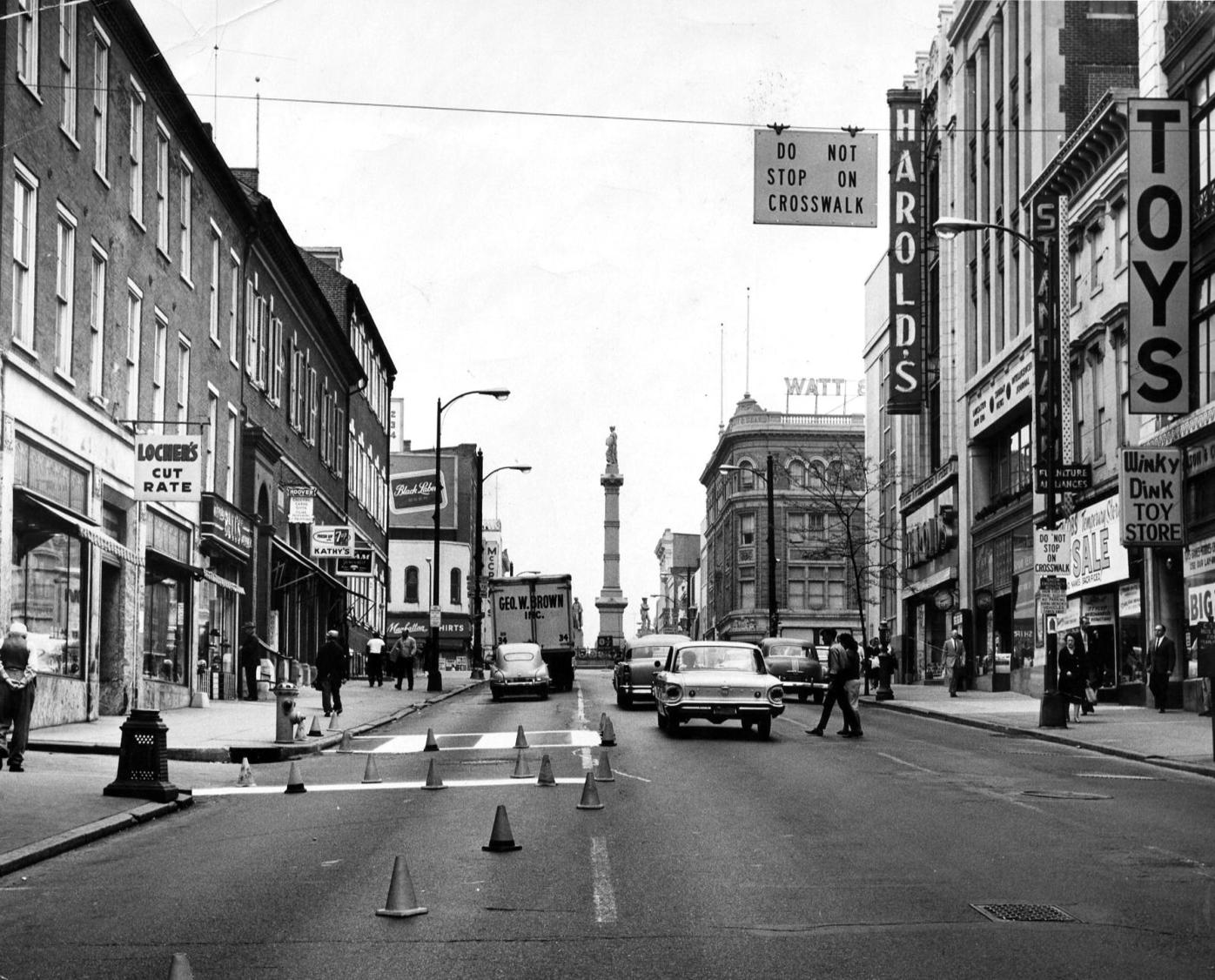 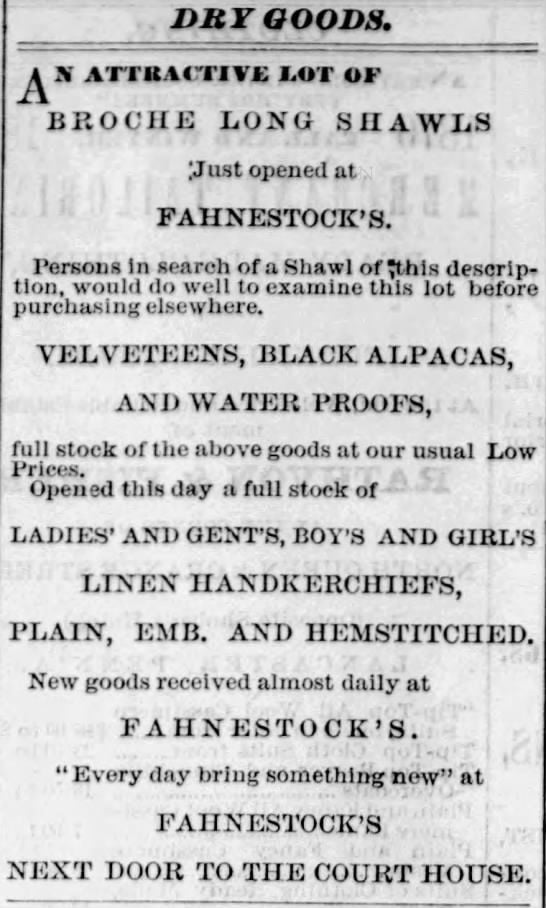 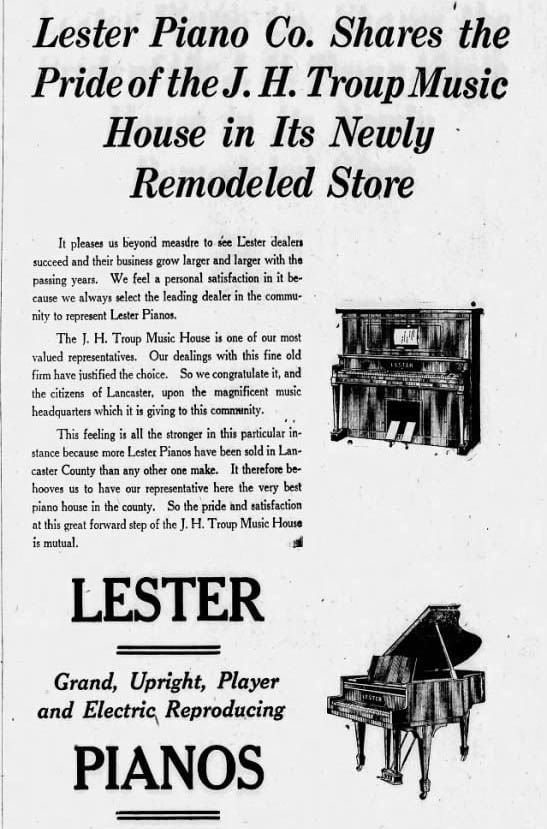 This is a 1913 file photo showing some of the retailers around Penn Square in Lancaster.

It’s a great time to look back at a few of the independent retailers that have served customers in downtown Lancaster over the past century and a half.

Here is a small sample of retailers that no longer exist in the city.

This large retail establishment, known as the “daylight department store” because of its skylights and open courtyard plan, was founded in 1893 by W. Scott Leinbach. It closed in 1949.

In 1919, employees honored Leinbach and his wife at closing time with a loving cup and flowers on the business’ anniversary, according to LNP archives.

The music house, which sold records, phonographs, pianos and other musical instruments, and offered music lessons, was originally established in Harrisburg. It was run by the family of “Route 66” songwriter Bobby Troup, who left Lancaster to seek his fortune in show business in California.

He was also an actor, appearing in the 1970s TV show “Emergency.”

The music house operated in Lancaster from before 1920 through at least the 1950s.

In December 1924, the local Troup store carried Brunswick Christmas records for 75 cents apiece, and in 1928 you could buy an Ampico Symphonique baby grand piano for $1,300.

The day after his 20th birthday in 1896, A. Leaman Futer went into the bicycle business in Lancaster, Futer recalled in a 1940 Sunday News story.

In the 1890s, Futer developed a new style of bike, with coaster brakes, called the Futer Flyer.

The shop later moved to the first block of East Chestnut Street.

Known by some as the 3-S store, this venerable retailer was one of the go-to stores in town for good quality men’s clothing. E.P. Sayres, William F. Scheid and J. Frank Sweeton, who had worked with each other for years at the nearby Williamson and Foster, store opened the shop in 1907.  Three generations of Jere Bortzfield’s family later ran the store; Bortzfield closed it in 1995 amid tough competition from large department stores.

Scheid, the last surviving member of the group of original founders, died in 1972 at age 96.

If you were thinking about holiday gifts in November 1963, Winky Dink Toys was the place to be.

According to the store's ad in the New Era, you could buy games such as Password, The Barbie Game and Candy Land for $1 to $3, an Erector Set for $3, Barbie clothes for 66 cents, a football for $2, an Etch-a-Sketch for $4 or the Kenner Give-a-Show Projector for $5.

And customers interested in getting holiday toys for workplaces, schools and churches were encouraged to see Bill Winkelman at the store to find out special prices for toys for Christmas parties.

In 1984, the Cotton sisters — Suzanne, 17, and Laura, 20 — opened State of Confusion at the site of the former Manhattan Peanut Stand.

Suzanne Cotton went on to become a fashion designer, according to a 1990 fashion story in the Sunday News, and later an associate professor and chair of fashion design at Columbus College of Art & Design in Ohio.

Before there was Garvin’s, there was Fahnestock’s.

Back in 1851, according to the Saturday Express in Lancaster, Fahnestock’s store at the southwest corner of North Queen and Orange streets, was run by Return E. Fahnestock,

“Among our merchants, particularly in the dry goods line, no name was better known than that of R.E. Fahnestock,” the retailer’s obituary in the Oct. 2, 1895, Semi-Weekly New Era, said.

The obit called him “fair, honorable and upright” in his business dealings, and said his “character was without blemish. “His whole life was devoted to business.”

Fahnestock eventually moved his store next to the county courthouse on East King Steet.

“Physical infirmities” and “loss of his eyesight” caused Fahnestock to retire in 1883, selling the store to his former store manager, Milton Thomas Garvin, who continued the business as M.T. Garvin & Co.

Oldest taverns in Lancaster County: 7 spots where you can really drink in history

13 popular restaurants of yesteryear in the Lancaster area

Leinbach's, Fahnestock's, Troup Music: A look at Lancaster's independent retailers, from the 1800s to 1990s

There are many ways to ensure that our community flourishes and everyone shares in its success. Collaboration is key — you need a good plan, a…

Why are news stories reported in townships rather than by town names? [Ask an Editor]

Is Amazon opening a package-delivery hub near Elizabethtown?

The developer of a sizable package-delivery hub near Elizabethtown refuses to identify its tenant.

Ken Burns, the documentary filmmaker famous for his PBS American history films such as “The Civil War,” “Vietnam” and “Baseball,” says he want…

History buff David Gelatt says he “giggled a little bit” when he learned that the Lancaster newspapers, going back more than two centuries, ha…

Despite the COVID-19 pandemic, four new restaurants opened their doors in Lancaster County during the month of July.

There were several shakeups to the retail industry in Lancaster County during the month of July.

Lancaster That Was: Tiny cemetery in Intercourse restored in 1994