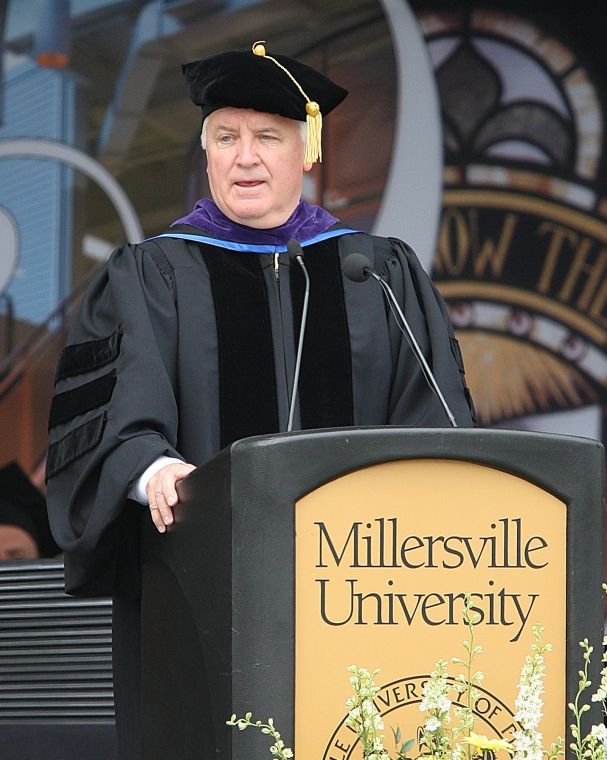 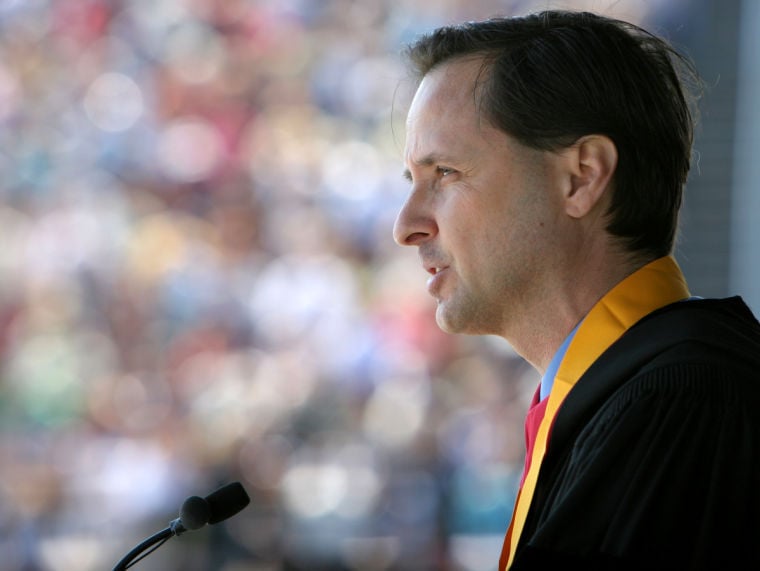 Millersville University alumni Hugh Herr speaks at the school's May 2011 commencement. Herr, who lost both of his legs in a climbing accident, is an associate professor at MIT. 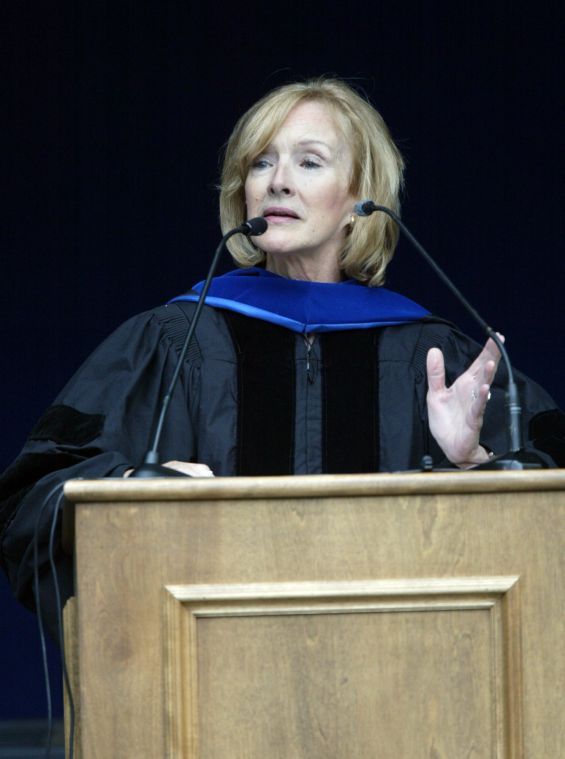 Judy Woodruff, senior correspondent and co-anchor of the “PBS News-Hour,” delivers the May 2010 commencement address at Franklin & Marshall College.

Millersville University alumni Hugh Herr speaks at the school's May 2011 commencement. Herr, who lost both of his legs in a climbing accident, is an associate professor at MIT.

Judy Woodruff, senior correspondent and co-anchor of the “PBS News-Hour,” delivers the May 2010 commencement address at Franklin & Marshall College.

The host of "This Week with George Stephanopoulos" and anchor of ABC's "Good Morning America" certainly has name recognition, but that's not necessarily what colleges are after when looking for speakers.

Alignment with a school’s principles and alumni connections matter more, according to college officials here who  talked about what they look for in speakers.

They also shared some memorable moments from past speakers.

At F&M, according to Deborah Martin, director of protocol and events, its committee looks for people who embody "creative leadership or distinctive accomplishment in scholarship, arts and letters, or the professions, or (show) service to humanity of national or international significance."

Schools tend to give their speakers honorary degrees; Stephanopoulos will receive a doctor of humane letters degree from F&M.

Samels was executive producer of "The Amish," which aired two years ago. Donald Kraybill, senior fellow at the school's Young Center for Anabaptist and Pietist Studies, assisted with the program.

John Rohrkemper, an Elizabethtown English professor and member of its academic occasions committee, said the college typically relies on personal contact in identifying potential speakers — someone the president or a trustee knows, for example.

"We do look for speakers who somehow connect with the college's mission. Our motto is 'Educate for service.' And we take that pretty seriously. We do look for people who have some kind of commitment to service to the larger world," he said.

As with other schools, the Bible College awards honorary degrees.

"We do this at Lancaster Bible College to strengthen the hand of someone in ministry," he said.

This year's speaker will be Joni Eareckson Tada, an author, speaker and Christian disability advocate. In 1967, at age 17, she became paralyzed after diving into the Chesapeake Bay, hitting her head on the bottom and breaking her neck.

"She understands the heartbeat of biblical higher education,” Teague said. “She understands what suffering is and she's really a very deep theologian with a very basic message to live out your faith every day.”

Aminta Breaux, vice president of student affairs at Millersville University, said the school looks for someone who will resonate with graduates.

“Today what we’re going for again is the individuals who have a connection or a message to higher education," Breaux said.

Last year, Gov. Tom Corbett was the speaker, a choice that drew some criticism because of his education cuts.

"We felt he had a strong message to our graduates," Breaux said.

In 1982, when he was 17 and a world-class rock climber, Herr lost both his legs in a climbing accident.

He stands out as a speaker for Breaux.

"I think his story was so moving in terms of the obstacles he's overcome and how he continued to inspire so many individuals," she said.

She recalled that he mixed humor and humanity to connect with the graduates.

Not every speaker is a hit, though.

"I have attended nearly every commencement in the 30 years I've been at Elizabethtown,” Rohrkemper said. “I've heard a range of speakers, from the wonderful ones to ones I've mercifully forgotten."

One of the worst, he said — declining to identify the speaker — was an entrepreneur who kept promoting their company.

Another speaker, he said, essentially told graduates to smile at people and hold doors for them.

She had agreed to speak, in 1990, but insisted on coming ahead to time to meet some of the senior class.

"By the time she came back, she was a rock star to them," he said.

When Charles Osgood spoke in 1998, he was committed to doing a television  show the morning of the ceremony.

“We flew him in in a helicopter from New York to Lancaster, so he could participate in the ceremony, and he arrived just in time. It was a nail-biter,” she said.

In 2009, retired Gen. Colin Powell drove here and arrived early, so he went to the nearby Waffle House with his assistant.

He was recognized, and customers stood and applauded him.

Dan Nephin is a Lancaster Newspapers staff writer. He can be reached atdnephin@lnpnews.com or (717) 481-6150. You can also follow @DanNephin on Twitter.