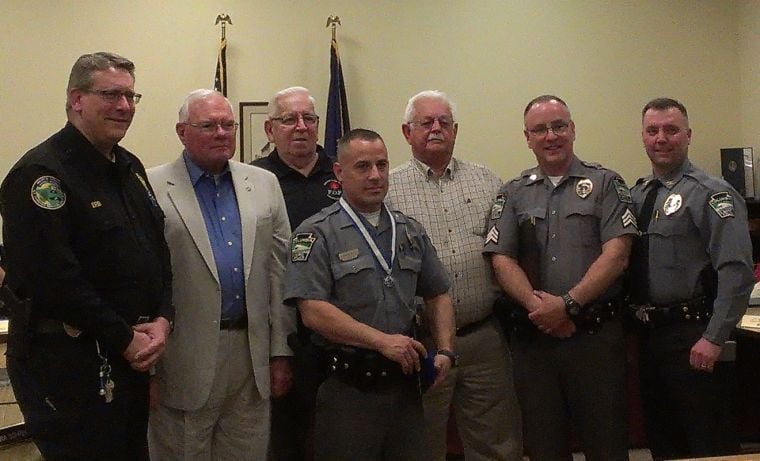 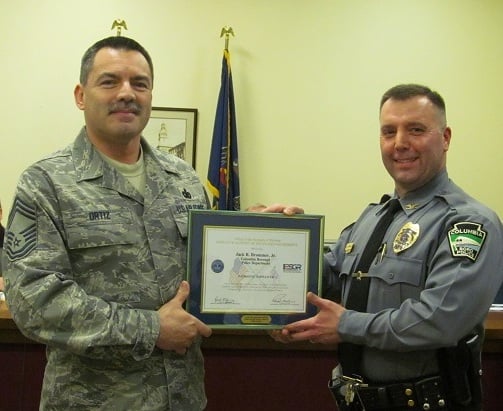 Members of the Columbia Borough Police Department both gave, and received, awards at the Monday, April 14, council meeting.

Officer Austin Miller received a Meritorious Service Medal from the Lancaster County Red Rose Fraternal Order of Police Lodge 16. The medal was in recognition of Miller's actions on Jan. 28, when he responded to a residential fire in the borough and helped save the lives of several people, including an infant.

That ceremony was followed by another presentation, by Columbia Police Chief Jack Brommer, to both Miller and Sgt. Jim Jacobs.

Jacobs also responded to the fire, assisting first in the evacuation and then helping firefighters hook up and charge a fire hose. Jacobs then aimed the hose at the burning home, yelling "charge it" and "attacked" the fire, Brommer said.

Brommer said he was not aware of Jacobs' actions until Officer Rich Bowermaster of the West Hempfield Township Police Department sent an email to Columbia, praising Jacobs. Humility and professionalism are hallmarks of police officers, Brommer said.

Miller and Jacobs each received letters of commendation from the borough.

That's precisely the reason the lodge created a peer-driven program in January.

"Anyone can nominate any active police officer to be recognized for actions deemed above and beyond the call of duty," Cerase said.

Miller's medal is one of the 15 awards available through the new program.

The final presentation of the evening was to Brommer himself. Officer Jose A. Ortiz Jr., a part-time police officer in the borough for 15 years and a chief master sergeant in the Air Force Reserve, nominated Brommer for a Patriot Award, which was granted.

According to a press release, the Patriot Award is given to "individual supervisors and bosses for support provided directly to the nominating Service member and his or her family.

“The Patriot Award reflects the efforts made to support Citizen Warriors through a wide-range of measures including flexible schedules, time off prior to and after deployment, caring for families and granting leaves of absence if needed."

The award is authorized by the ESGR — the Employer Support of the Guard and Reserve, an office within the Department of Defense.

Ortiz said that Brommer deserved the award because, in 15 years, there has never been a problem when Ortiz needed to change his schedule, or even cancel a shift, due to a military obligation.

"I give Chief Brommer many kudos" for being supportive "without hesitation … not even a sense of discomfort and never being upset," he said.