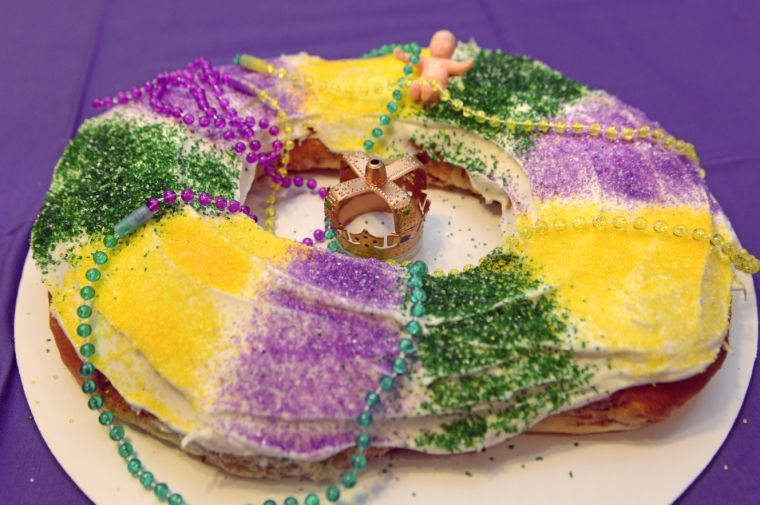 A King Cake made by David Burkholder chef at Achenbach's Pastries in Leola. 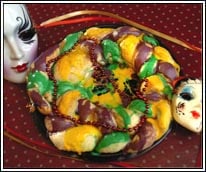 For her king cakes, Sharon Prudhomme creates three separate dough "snakes," which she sugars and braids before baking again. She finishes her cakes with colored icing, more sugar and Mardi Gras beads. 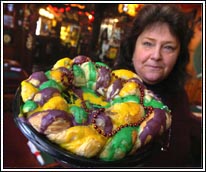 Sharon Prudhomme holds up one of her king cakes. 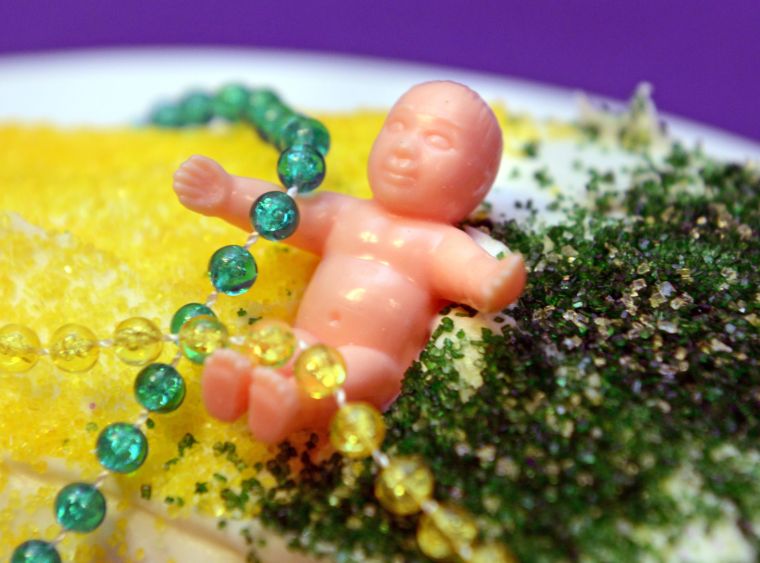 It's a Mardi Gras tradition to have the baby inside the king cake. 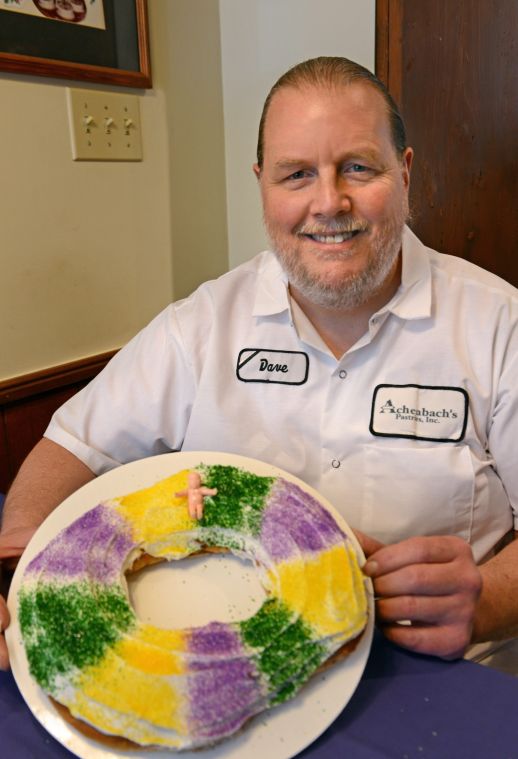 David Burkholder holds one of his king cakes for Mardi Gras.

A King Cake made by David Burkholder chef at Achenbach's Pastries in Leola.

For her king cakes, Sharon Prudhomme creates three separate dough "snakes," which she sugars and braids before baking again. She finishes her cakes with colored icing, more sugar and Mardi Gras beads.

Sharon Prudhomme holds up one of her king cakes.

It's a Mardi Gras tradition to have the baby inside the king cake.

David Burkholder holds one of his king cakes for Mardi Gras.

Mardi Gras begins Tuesday and if ever there was a time for you to have your cake and eat it too, it’s that very day — also known as fat Tuesday.

And if you’re going to eat cake, make sure it’s a traditional king cake with the plastic baby hidden inside. The one who gets the baby in a slice, supposedly gets to be king or queen for the day and have good luck.

Indulgence, entitlement and good fortune get packed inside this oval-shaped, sweet, cinnamon-swirled dough decorated with vanilla frosting and sprinkled with purple, gold and green sugar crystals. What’s not to love?

David Burkholder has been baking king cakes at Achenbach’s Pastries Inc., 375 E. Main St., Leola, for about eight years. The first year he tried it, not many were sold. But this New Orleans favorite started catching on in Pennsylvania Dutch Country, and now he gets orders year-round.

Recently, Burkholder received an order for 50 king cakes to be delivered to Lancaster Labs, where some of the treats will have a baby inside and some won’t.

He bakes the cakes and partially hides the baby inside each before he frosts them. Then no one has to worry that someone “might swallow the baby or chews on the baby,” he adds.

At Prudhomme’s Lost Cajun Kitchen, 50 Lancaster Ave., Columbia, Sharon Prudhomme has been making king cakes for more than 20 years. She likes to bake the baby inside the cake.

“We do the traditional sweet bread dough,” she says. She lets the dough rise once, then cuts it into three long “snakes,” which she then rolls separately in one of the three sugars — purple, gold and green — and braids the three together, swinging them around into a wreath.

After those rise again, she says, “I shove my baby underneath. It won’t melt,” she assures. “Sometimes, there are air pockets that push the baby up. It’ll be halfway baking and you’ll see the little hand sticking up,” she says, laughing, while referencing the old “Chiller Theatre” TV show.

When her braid is done baking and it has cooled, she’ll color it with “very vivid” icing. Before the icing dries, she shakes more colored sugar over the entire cake. With each packaged cake, Prudhomme makes sure at least one bead necklace is included.

In New Orleans, Mardi Gras is the busiest time of year for Haydel’s Bakery, which claims to be the world’s largest shipper of king cakes. There, the staff creates a similar confection to Achenbach’s Pastries, but also offers king cakes that are filled with cream cheese, strawberry cream cheese, praline pecan or chocolate chip brownie. The company produces about 60,000 king cakes yearly, according to Meredith Timberlake, brand development and special projects manager.

“King cake, it is said, can be traced back to the Middle Ages. Revelry and religious tradition are intertwined in today’s Mardi Gras customs,” Timberlake explains. “The 12th night after Christmas — Jan. 6 — is said to be the date kings bearing gifts visited the baby Jesus.”

Timberlake says the cake was baked to honor the Three Wise Men, or kings.

“This tradition ... has evolved over time,” she adds. “The small baby hidden inside the cake or placed beneath it replaces the coin or bean once used to determine who would reign as carnival royalty.”

Prudhomme’s in Columbia will have its own Mardi Gras party on Saturday, with a band providing live Cajun music at 7 p.m. “We’re having a hat contest,” Prudhomme adds. “Ugliest, dumbest, cutest, blah blah blah ... everybody should win.” They’ll be king cake and “gallons” of hurricanes and special New Orleans beer.

But know this: If you get the baby — along with the title, luck and prosperity — you also are charged with purchasing the king cake for next year’s Mardi Gras.

Lynn Schmidt is co-editor of the Lifestyle section and writes about beer in her What Ales Yacolumn. She can be reached at lschmidt@lnpnews.com or (717) 291-2995. You can also follow @Lynn_justLynn or @LancLifestyle on Twitter.

For those looking to celebrate Mardi Gras with a king cake, here is a recipe from Tabasco to try

Check out our Mardi Gras articles, complete with recipes and tips.