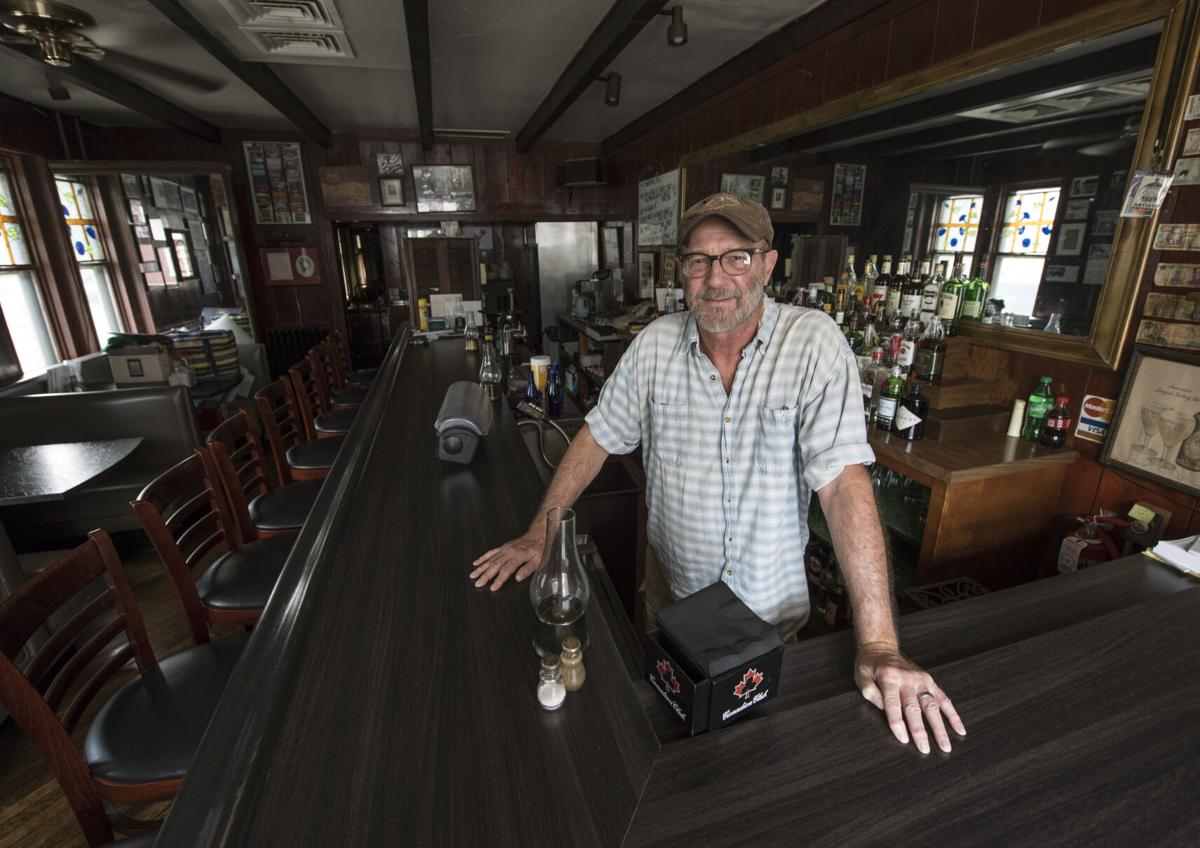 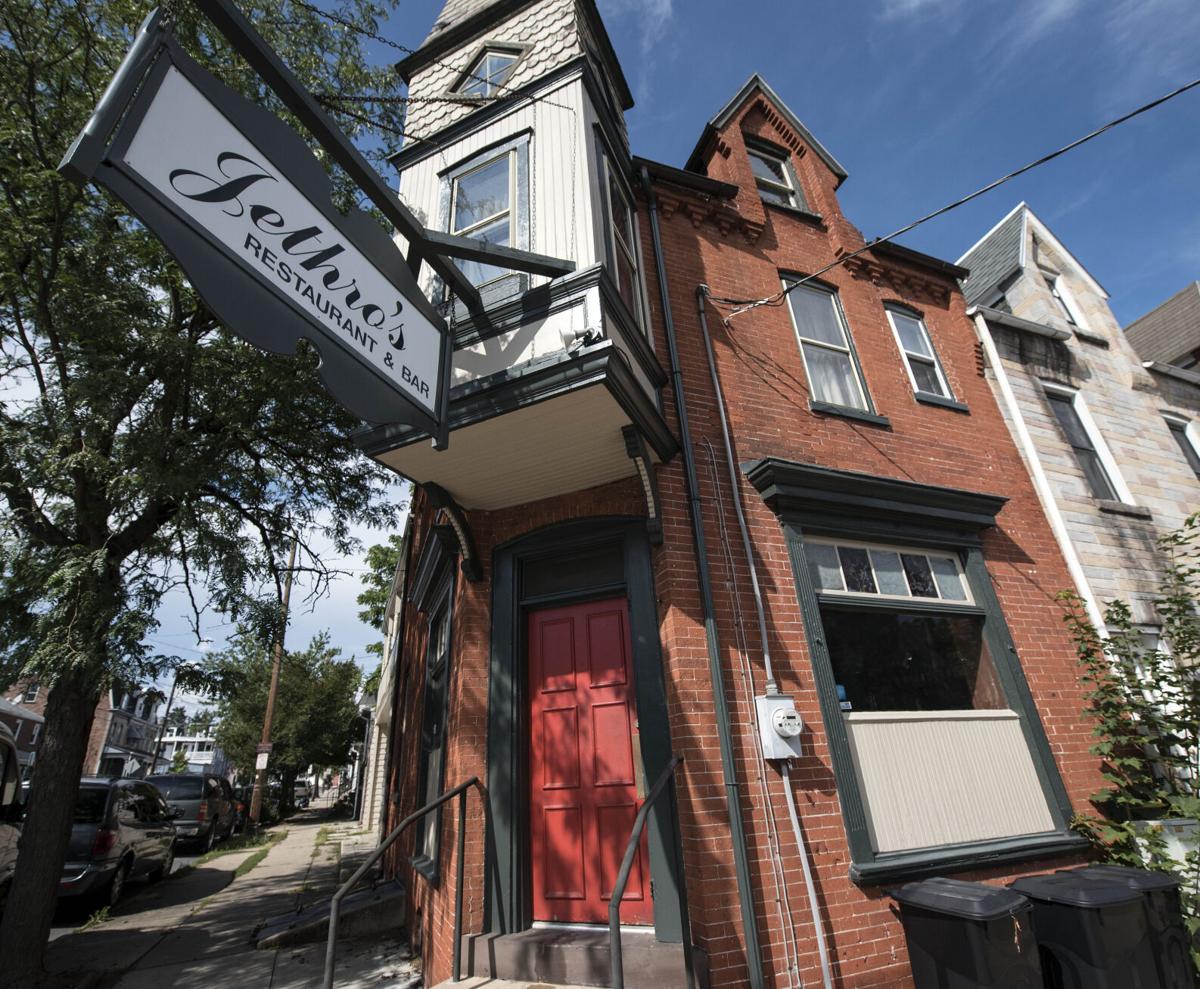 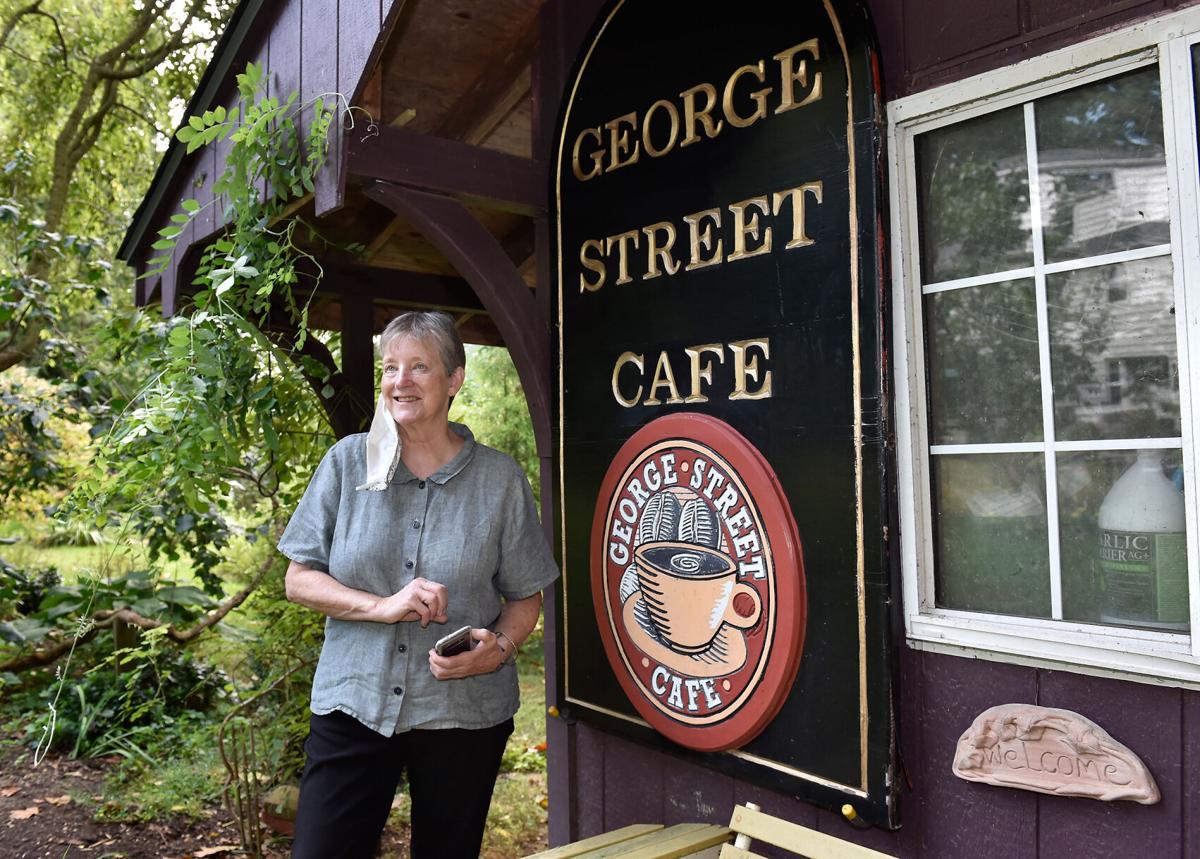 Susan Lithgoe is pictured by her George Street Cafe sign that hangs in her back yard after deciding to close the cafe due to Covid-19 on Monday, August 24, 2020. 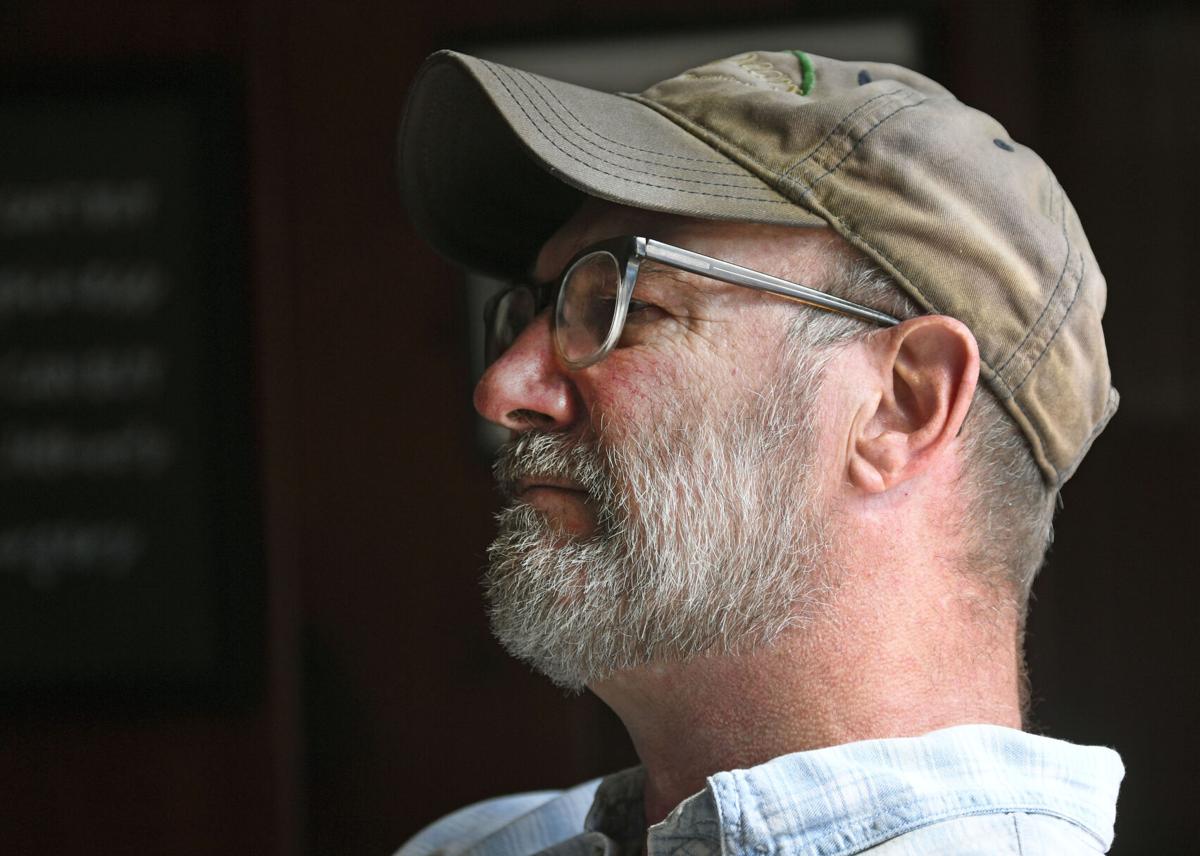 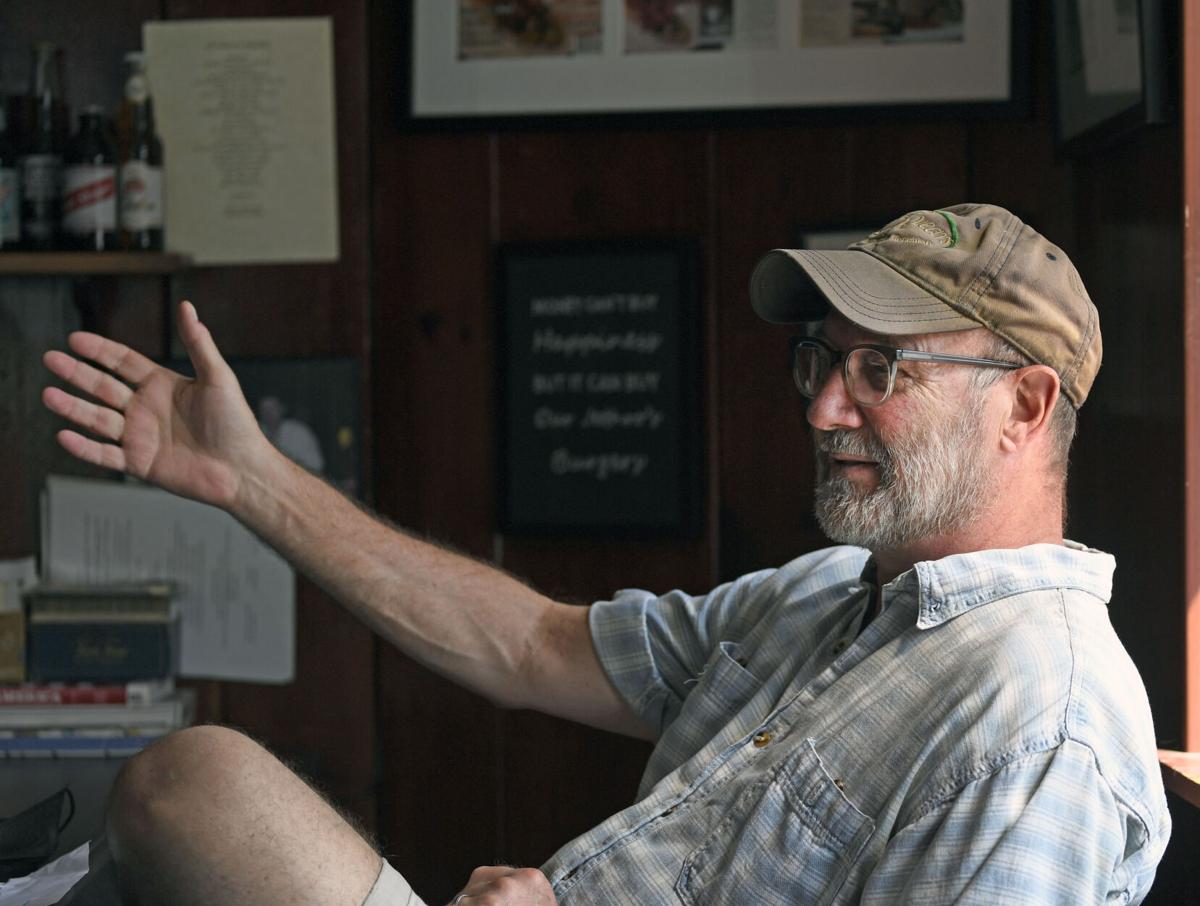 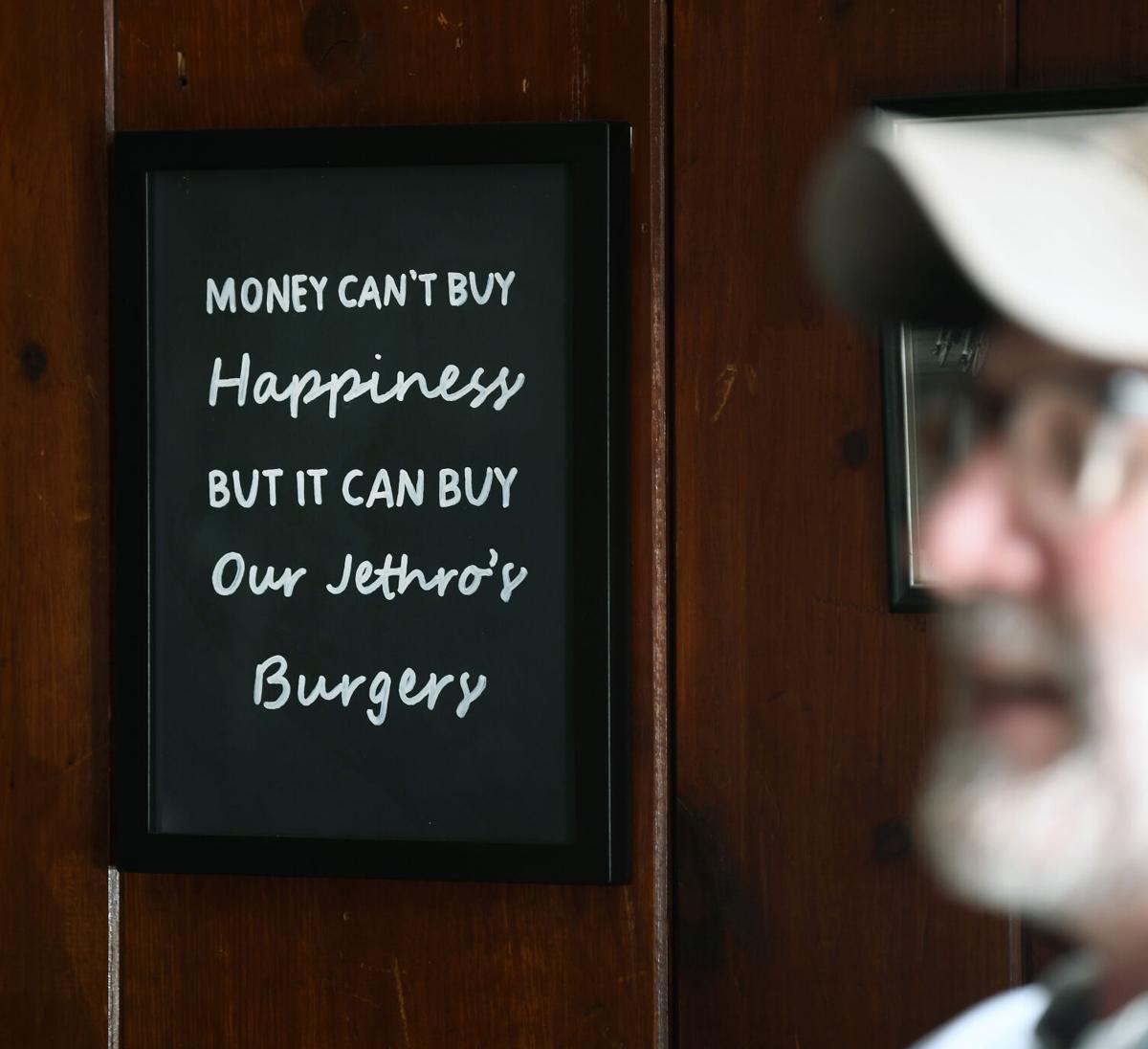 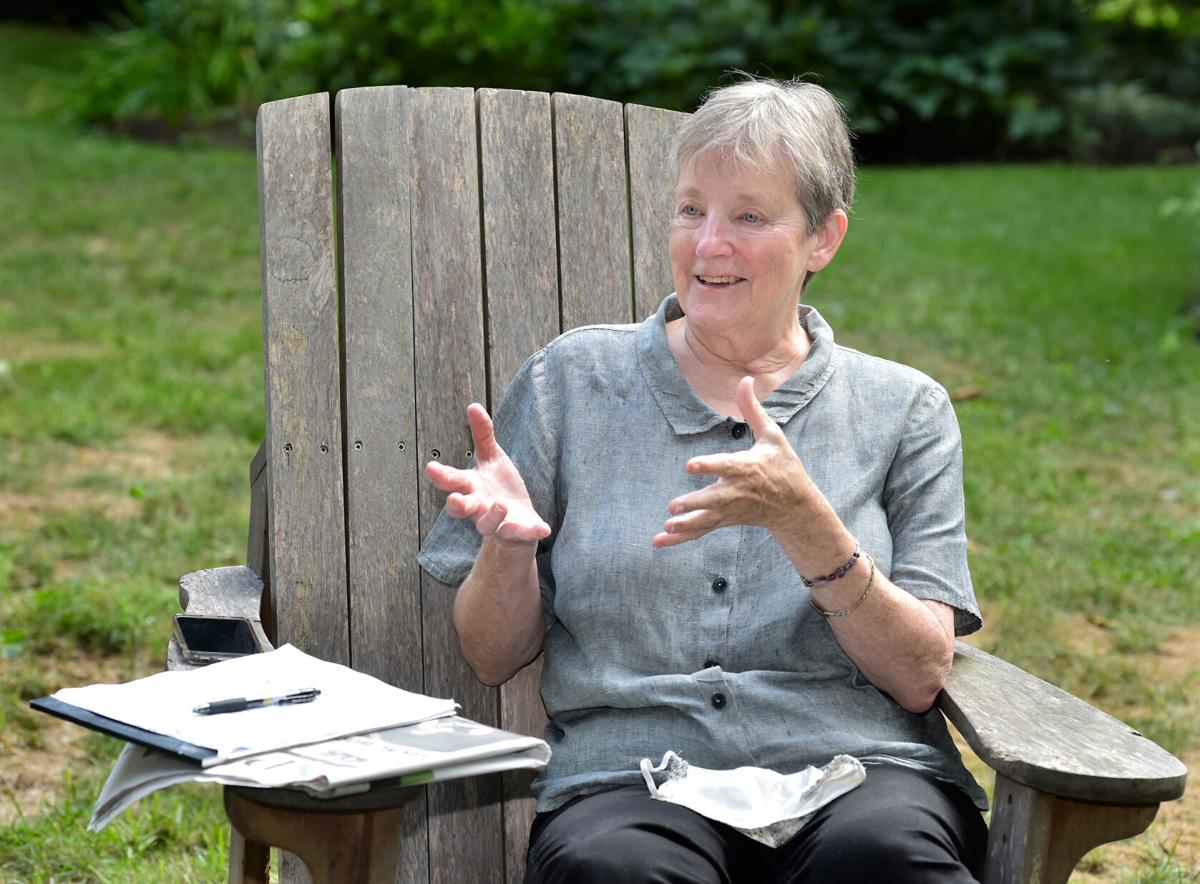 Susan Lithgoe talks about her business, George Street Café, after deciding to close the cafe due to Covid-19 on Monday, August 24, 2020.

Susan Lithgoe is pictured by her George Street Cafe sign that hangs in her back yard after deciding to close the cafe due to Covid-19 on Monday, August 24, 2020.

From a bar seat in the front room at Jethro’s where liquor bottles still terrace up to a barback mirror and the walls remain crowded with framed photos, advertisements, crinkled foreign currency and random memorabilia befitting a more than 42-year-old neighborhood bar and restaurant, Bob Esbenshade ponders the future.

In early July, 68-year-old Esbenshade and his 55-year-old wife, Jen, announced the permanent closure of the restaurant they’ve owned since 1992. Jethro’s had been shuttered since mid-March because of mandated shutdowns meant to limit the spread of COVID-19. It never reopened.

Now, after a deal to sell the restaurant got scuttled because of the coronavirus pandemic, Esbenshade says he’s uncertain if Jethro’s will ever return, or whether its pieces – liquor license, equipment, and real estate – will be sold separately, ending any semblance of what had been a Lancaster dining institution.

Lancaster County restaurants react to return to 50% capacity limit; 'You still bleed, just not as much'

Yet Esbenshade says he prefers the wistfulness for his days as a restaurateur and the uncertainty of a hoped-for sale to the headaches of trying to actually operate during the pandemic.

“I think it would be a 100 times more stressful than it is now, just waiting for it to sell,” he said. “I’m glad we decided early on we weren’t going to reopen.”

Restaurant owners have faced unique challenges as their operations have been tightly controlled to try to limit the spread of COVID-19. Some pivoted, with mixed results, to takeout after Gov. Tom Wolf’s March 17 mandate forced them to close. Now, with limits on indoor capacity still in place, others have tried to maximize outdoor seating. Yet, like Ebenshade, brutal financial realities have prompted some to call it quits, a decision experts say will likely become more common.

"We couldn't see ourselves in the long run anymore."

“Every day you’re working your ass off, adding stress to your life, and you’re losing money,” said Ray Hottenstein, the former longtime owner of Greenfield Restaurant and Bar in East Lampeter Township.

Despite the already discouraging situation in Lancaster County as community institutions like Jethro’s falter, there is good reason to believe restaurant closures across the county have yet to hit a peak. Numbers could rise well above 100 as seating capacity restrictions choke revenue and financial assistance for small businesses dries up. Uncertainty caused by the pandemic is also taking its toll as investors who might have otherwise jumped at the chance to purchase a restaurant hold back from making deals with owners who are aging out or looking to move on.

While temporary restaurant closures make it hard to know who has actually called it quits for good, LNP | LancasterOnline has reported on nearly 20 Lancaster County eateries that announced permanent closures since March, a period during which a half-dozen opened.

Yet the actual number of closures is likely to rise.

Based on national survey by Yelp, The Pennsylvania Restaurant & Lodging Association has estimated 30 percent of restaurants statewide will permanently close because of the coronavirus pandemic and state’s continuing restrictions on dining, according to John Longstreet, the trade group’s president and CEO.

“Each day we delay opening restaurants is another day that more restaurants close,” Longstreet said.

If 30% of restaurants close statewide, that would mean 2,500 would be lost, Longstreet said. While that number could be lower or higher in Lancaster County, where the state Department of Labor & Industry lists 720 restaurants, a similar closure rate would mean the loss of 216.

We visited Shady Maple Smorgasbord for its 'touchless buffet'; here's what it was like

Longstreet says Gov. Tom Wolf’s announcement that restaurants can resume 50% indoor capacity Sept. 21 will help, but only a little, since operators will still be hobbled to a ban on bar seating and a prohibition on alcohol sales after 10 p.m.

“It’s an example of something that the headlines make it look like good news, but it’s really not good news,” he said.

Hottenstein, a past president and board member of the state restaurant association, said restaurants were able to remain viable through federal, state and local assistance programs, including the federal Paycheck Protection Program. But with much of that money running out, many operators are finding the economics don’t make sense.

“When you’re working on a 5 percent margin, there’s nothing left. There’s no slush fund anyplace,” Hottenstein said. “They all operate fine-tuned and this is something they weren’t tuned up for.”

Given that reality, Hottenstein says he isn’t surprised that some restaurants have tried to stop some of the bleeding by closing temporarily as they await the further loosening of restrictions.

“It’s very radical, but it’s smart way of doing it,” he said.

But when restaurants close even temporarily, Longstreet says its makes them more likely to close for good. And those empty restaurants will likely linger since he says fewer people are willing to take on the risks of opening when there is so much uncertainty.

“Historically when a restaurant closed, another one opened, and it’s usually in the same space,” he said. “That’s not going to happen now.”

Susan Lithgoe likes to think there will soon be another Millersville coffee shop to serve as a community hub in the college town, offering a convenient place to hold a meeting, or catch up with friends or colleagues.

“Don’t you think something at some point will emerge, kind of like it has to,” the 70-year-old said during a recent interview.

But if a new coffee shop does emerge in Millersville, it won’t be in the former bank building at 304 N. George Street where she first opened George Street Café in 1998. The café never reopened after mid-March and Lithgoe announced in late April that it would be permanently closed.

Now, Lithgoe has sold or donated the restaurant equipment and furnishings from the building, which she says is set to be turned into professional offices. The building is owned by her brother-in-law. The old George Street Café sign now adorns a “she shed” in the back of Lithgoe’s Lancaster Township home.

“I never saw myself getting out of it,” said Lithgoe. She had contemplated trying to sell the business years before but struggled with determining how much it is worth, and then finding a buyer.

Yet Lithgoe says “a switch flipped” as she watched the news about the pandemic and realized she didn’t have it in her to endure the years of struggle she figured it would take to get back on a solid footing.

“It’s freeing me up. I’m not worried,” she says of her decision to close.

A native of Kentucky, Lithgoe graduated from Louisiana State University before living in Colorado and Oregon. She moved to Millersville with her husband in 1989, opening a small coffee roastery, which was followed four years later by an espresso bar, and then George Street Café.

“I really liked the food, the people part of it, and it just kept growing,” she said.

At George Street Café, she tried to steer customers toward ingredients and fresh and healthy foods that weren’t always familiar. A July 1998 Intelligencer Journal story on the café’s opening noted “they will also sell ‘wraps,’ a new species of burrito.”

"I never saw myself getting out of it."

Lithgoe also became known around town, helping in 1997 with the relaunch of the Millersville Community-University Parade, a reboot of the homecoming parade which has become the marquee fall event in town.

While she’s grateful to not have to deal with the headaches of operating a restaurant during a pandemic, she’s hopeful for the ones who are left.

“It’s a respectable industry, it’s a good job to have, they are dedicated, they are loyal, they are disciplined, they are driven, and that’s what’s going to get them through,” she said.

Since 1978, Jethro’s has been an anchor restaurant in the West Lancaster Jewels neighborhood of Lancaster city where rows of sturdy brick homes sit along tree-lined streets named for precious stones.

Ed Diller opened the restaurant in February 1978 and Chris and Lucie Orzech ran it for seven years before the Esbenshades bought it in 1992. In 2002 Bon Apetit magazine recognized it as a great example of an American neighborhood restaurant.

“This is a mom and pop place at its heart. I ran the front and Jen was the executive chef in the back,” said Bob Esbenshade, who met his wife while working as a bartender at the restaurant they now own.

But as they both dealt with health problems, the couple decided to put their restaurant on the market late last year. Esbenshade said the initial response was encouraging, with at least 20 potential buyers coming through to look at the place. One signed offer they had in January fell through. But another remained viable through April, prompting the appearance of a bright orange liquor license transfer sign that stayed on the door into May.

But then that deal also fell through thanks to what Esbenshade said he understood to be problems with the buyer’s bank financing caused by the pandemic.

“Some wrench got thrown into something on their part,” he said. “It’s not something we can beat ourselves up about or even worry about because there’s nothing we can do about it at this point in time.”

Without a buyer, Esbenshade they didn’t have the energy to resume operating the restaurant in light of what he anticipates would be some lean times ahead.

“It’s going to be a several year process to try to get back to where you were before the whole COVID thing started,” he said. “We couldn’t see ourselves in for the long run anymore.”

Esbenshade said the decision to keep the doors closed at Jethro’s looks increasingly wise given the current 25% capacity limit and the prohibition on bar seating. And an increase to 50% capacity wouldn’t even help that much, he said.

Lancaster County restaurants cope with shutdown orders, brace for 'new reality' when they can reopen

With seating for 50, no room for outside dining, and a bar that nearly fills one of the two rooms, Esbenshade says a 50% capacity limit would only allow him to have two booths in the front and four tables in the back.

“With the restrictions right now, it’s pretty much impossible to operate this place,” he said.

As he awaits a buyer, Esbenshade said he feels fairly confident about eventually being able to do some kind of deal.

“Selling sooner than later is fine with us,” he said. “Right now, the reality of the situation is not a whole lot of people what to jump into it.”

The West Lampeter Township Community Foundation will kick off a major construction project Tuesday for a $2.5 million athletic complex.

Northwest Bank will close four of its 14 Lancaster County offices the week of Dec. 14, it announced Thursday, as it consolidates its bank-wide…

U.S. Western District Judge William Stickman IV on Tuesday declined to stay, or put on hold, his own ruling that some of Gov. Tom Wolf’s COVID…