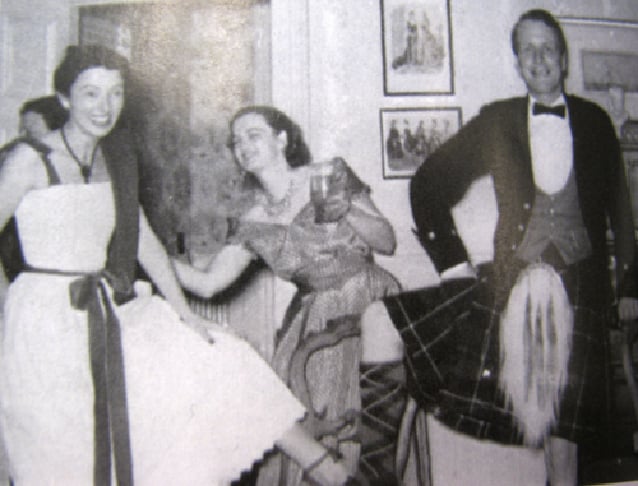 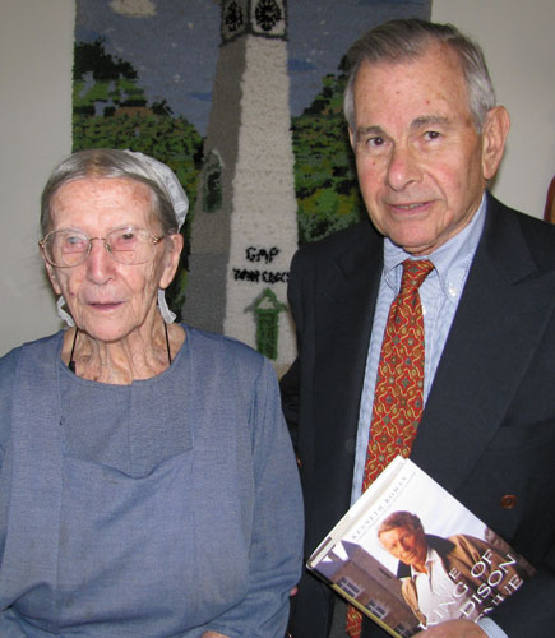 Annie Fisher poses with author Ken Roman at her home in Gap.

Annie Fisher poses with author Ken Roman at her home in Gap.

A global icon and self-described flamboyant Scotsman, the late Ogilvy is credited as the father of brand marketing.

A new book released last month by Ken Roman, a former chairman and chief executive of the New York advertising firm Ogilvy & Mather, goes beyond Ogilvy's advertising genius to explore his implausible relationships with the local Amish community and Lancaster County's social elite during the mid-1940s.

Those relationships, Ogilvy's comical adventures as Gap's "blue-blood tobacco farmer" and other eccentric escapades are examined in Roman's book "The King of Madison Avenue."

Ogilvy, who died in 1999 at the age of 88, "was not much of a farmer," Roman said. "But he loved his farm and the Amish people and their simple ways."

Roman said Ogilvy, in his autobiography, spoke of being welcomed by the Amish community and wrote that "visiting the Amish is like visiting a very large rural monastery."

But Ogilvy also described a bit of culture shock at his first Amish party:

"The conversation turned to the fact that my wife and I had one child," Ogilvy wrote. "This struck them as bizarre, and a venerable great-grandmother suggested my wife should 'get a new rooster.' "

Ogilvy, who first stayed with the Fishers in 1943 on their farm on Denlinger Road in Salisbury Township - before deciding to buy the farm next door - lived in Gap from 1946 to 1948 "in the only farm with a Bentley in the driveway," Roman said.

Fisher remembered when Ogilvy and his wife first stayed with her family.

"The first night, half the house roof blew off," Fisher said. "We had a thunderstorm coming up, sort of a twister, so everybody was out mopping water."

It appeared Ogilvy was out of his element from the start.

After all, Fortune Magazine described him as one "who might easily be mistaken for a successful British actor. He smokes a pipe, his speech is that of an English gentleman, and he wears tweed to the office, where he is served tea every afternoon by a maid named Bridey Cummins."

Ogilvy came from a distinguished family and was educated in a Scottish school known for its royal alumni. He was related to the writer Rebecca West, who visited him in Gap when she covered the Republican Convention in Philadelphia in 1948.

Before he went to New York to launch his global ad firm in '48, Ogilvy struck up lifelong friendships with Amish residents Annie; her husband, Levi Fisher; and Jake and Katie Blank.

Ogilvy and with his wife, Melinda, also socialized with Lancaster County's elite. At those times Ogilvy "could be as rude as he was charming," Roman said.

Roman heard many stories from Ogilvy's local acquaintances. A favorite is one about Peter Posey's dinner party in 1948 at Sunnyside Farm in Gap - the summer home of Isaac Hull Stauffer III, who helped Ogilvy find the farm he eventually purchased.

Ogilvy had been told the party would feature all the local "gentry," which included Sally and Sam Slaymaker, Nancy and Arthur Dodge, Jean and John Ranck, Emmet Rasbridge, Clifford Backstrand, Blanche and Jack Steinman and Rear Adm. Walden Lee Ainsworth.

"As he was leaving, David, with shoe planted firmly on an upholstered chair, said loudly, 'But where are the gentry?' " Roman said.

Lancaster attorney Michael H. Ranck said he remembers as a child that Ogilvy would return to visit his parents in Strasburg from New York, driving a Rolls Royce or Bentley with several flags attached to it.

"We thought the Queen of England pulled up in our driveway," Ranck said.

While here, Ogilvy's wife made friends with the Amish and went to quilting bees, and "he (Ogilvy) had fun - Amish men would beg him to sing the old song 'Michael Finnegan, Finnegan begin again,' " Roman said.

Ogilvy's first view of Lancaster County and the Amish came while he was on a train heading to Washington, D.C. - where he worked for British intelligence during World War II. He began vacationing in Lancaster and befriended the Fishers, who invited him to stay with them in Gap. Annie Fisher said Ogilvy fit in well, helping on their family farm during a visit while World War II raged.

Eventually, Ogilvy became an expert on the Amish and advised visitors on their customs, such as their desire not to be photographed. After he left Lancaster for New York in 1948, Ogilvy served as a consultant on the Broadway musical "Plain and Fancy" - "no hex signs, no arranged marriages," Roman said.

While living in Lancaster, one of his neighbors, Harold Shaub, a former chairman of Campbell Soup, had a favorite story about Ogilvy. It took place at a party with some Amish farmers, who baited Ogilvy, who often wore a cape or kilt, Roman said.

Shaub said his neighbors repeatedly asked Ogilvy how many sheep he had. He would say, "Just a few. I'm really an advertising man in New York," Roman said.

When Ogilvy finally replied that he had 22 sheep, he became puzzled when a farmer asked "What are their names?"

A glance at David Ogilvy

Ogilvy's story has become hip again thanks in part to the award-winning A&E TV show "Mad Men," which dramatizes a period in the 1960s when Ogilvy was considered tops on Madison Avenue.

Roman notes that in 1962, Time Magazine called Ogilvy "the most sought-after wizard in today's advertising industry."

He created the eye-patched man in the Hathaway shirt and the distinguished "Commander Whitehead" to pitch "Schweppervescent" mixers, as well as the Dove soap "one-quarter cleansing cream" ad that still runs today.

He also created the well-known Maxwell House "Good to the last drop" slogan.

One of most famous print ads featured this 1960 headline: "At 60 miles an hour, the loudest noise in the new Rolls-Royce comes from the electric clock."