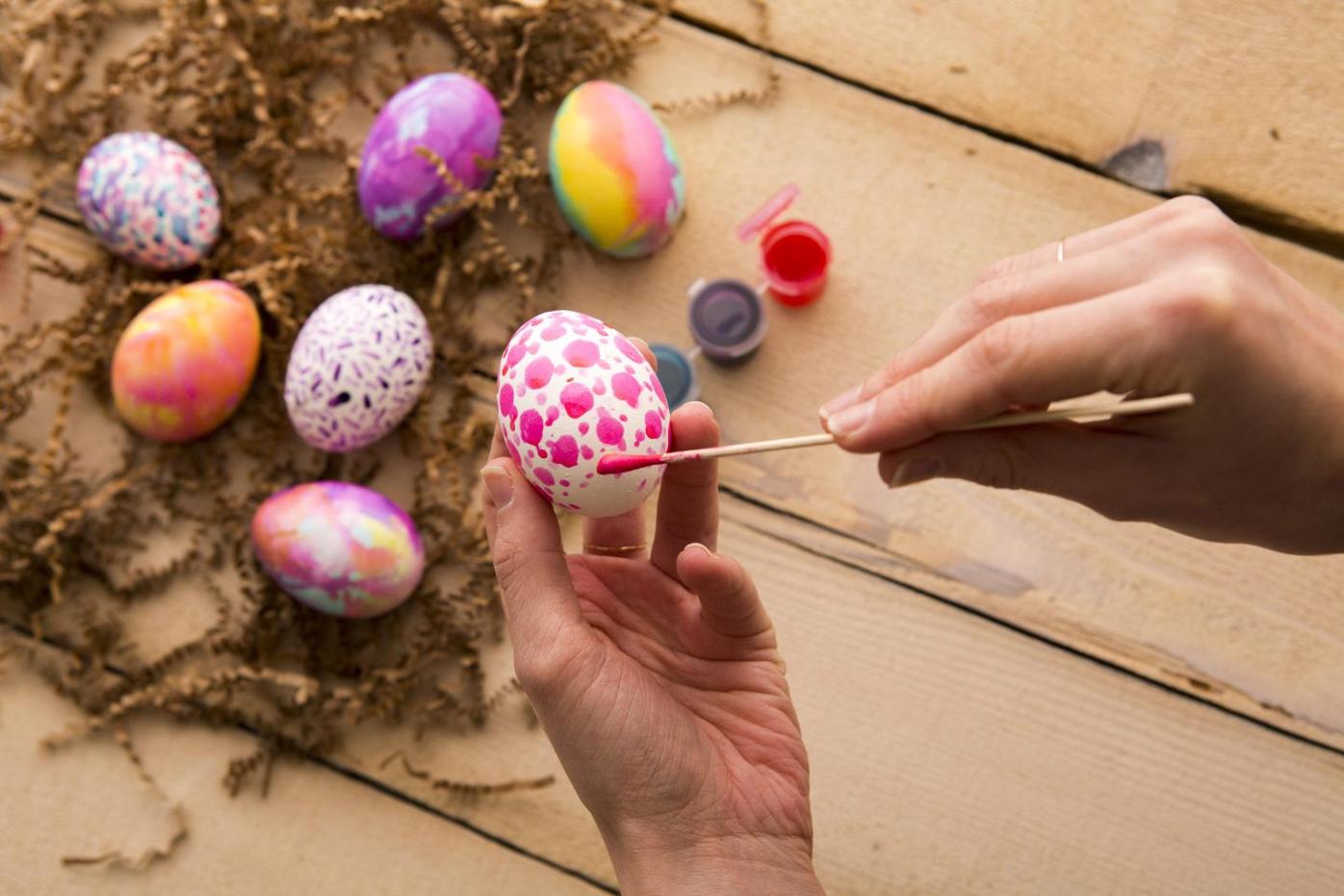 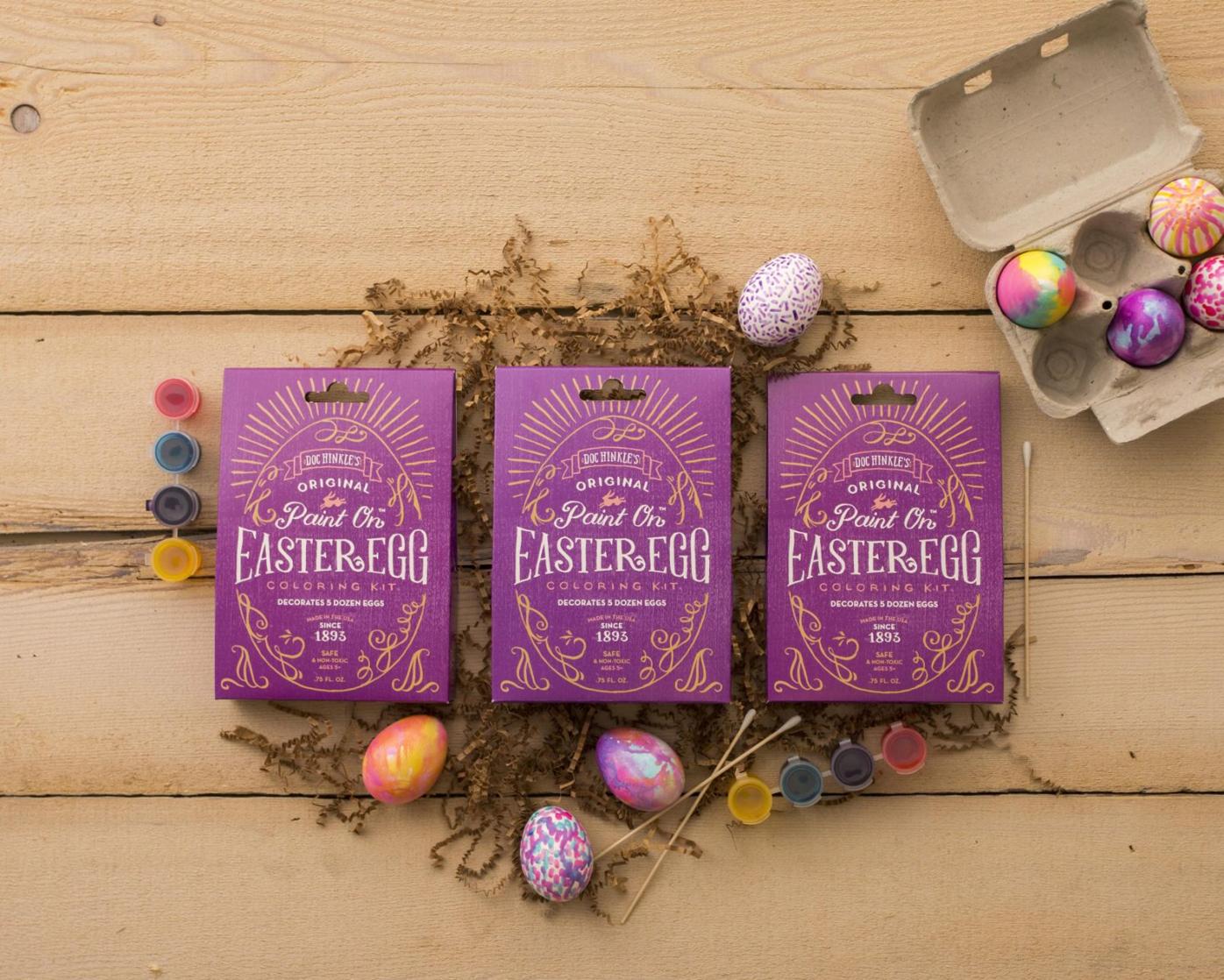 Brant Hershey’s official title at the John Wright Co. may be engineering and legal manager, but he’s also known as Doc Hinkle.

Hershey oversees production of Doc Hinkle’s Paint-On Easter Egg Dye, one of the few remaining storied Easter egg dyes that is still made in the country.

Although the Wrightsville company has been producing it since 2002, the dye has a 120-year-old history in Lancaster County.

While Hershey’s colleagues may affectionately refer to him by his nickname, the dye is actually named after Samuel W. Hinkle, who created the product in the basement of his eponymous Columbia pharmacy in 1893.

“My grandfather started making the dye about the same time he started his pharmacy,” says John Hinkle. “After he got the formula he wanted and the colors were the way he wanted them, he started selling it in his drugstore.”

Hinkle owns and operates the family pharmacy at Third and Locust streets with his son, who is also named John.

“After my grandfather started selling it in his store, word began to spread and other merchants wanted to sell it, too,” he said. “Soon, it was selling in Lancaster and neighboring towns.”

Hinkle is not sure what prompted his grandfather to think of creating an egg dye, but noted it’s not a completely far-fetched idea for a pharmacist.

Sales of the dye continued to grow, and as Lancastrians moved out of the area, they’d contact Hinkle’s Pharmacy about the dye at Easter time.

“They’d write in and ask if we could send them some, and that opened up doors for us to sell in other places, too.”

Over time, the retail sales of the dye expanded into New York City and all along the East Coast.

“As the retail operation grew, we branched out into the Midwest, and we started to get brokers who would represent us in other areas of the country, including as far away as California,” Hinkle said.

Unlike other commonly available Easter egg dyes, Hinkle’s is a paint-on dye.

“It is formulated to dry immediately with a gloss finish, and the color doesn’t smear,” Hinkle said.

Until the early 1970s, the dye was produced in the pharmacy’s basement, but when the operation grew in size, they built a plant in Lancaster in the early 1980s.

By 1984, the family decided to sell the dye business to a company in Baltimore.

It was not an easy decision, Hinkle says, but a necessary one.

“I was expanding the pharmacy at the time, and the dye is of course a highly seasonal operation,” says Hinkle, who has been directly involved with the company for more than 50 years. “It was something I was trying to do part time, but it was really becoming a full-time situation.”

The Baltimore company — Life-Like Products — continued to produce the dye until the John Wright Co. bought it in 2002.

“Owners were really interested in bringing it back to the Columbia/Wrightsville area,” says Hershey.

Easter egg dye is an interesting addition to a company that specialized in cast iron products.

“It sells very well in central PA, but we’d like to have a stronger retail presence in other places, too,” he says. Currently, along with Hinkle’s Pharmacy, it’s available at Weis Markets and Darrenkamp’s, among other stores, and can be purchased online at www.dochinkles.com.

The company kept the original formula, with just a few tweaks, but recently updated the dye’s packaging to give it a retro look that captures its long history and tradition.

It’s still a paint-on product, which Hershey says sets it apart in the market. With a lot of similar products, you dip eggs into the color solution.

“People like that it’s old-school and it’s different,” he says. “You paint the dye on with Q-tips, and you can really get creative with it. You can put more of yourself and your style on the egg than you can with an egg you dip in color.”

Hershey says he’s particularly proud that all aspects of the product — from the ingredients to the bottles, the cotton swabs and even the box — are made in the United States.

“Our competing dyes are made in China, so that really makes us stand out,” he says.

The product may be associated with Easter, but at John Wright producing it takes several months.

“We start producing batches sometime in the early fall and start bottling it in November. Production runs through January.

Hinkle says he’s happy his grandfather’s dye is still bringing color to Easter eggs more than 120 years after it was created.

“We get a lot of requests from people who remember it from their childhood,” he says. “We will ship it to anyone who requests .”