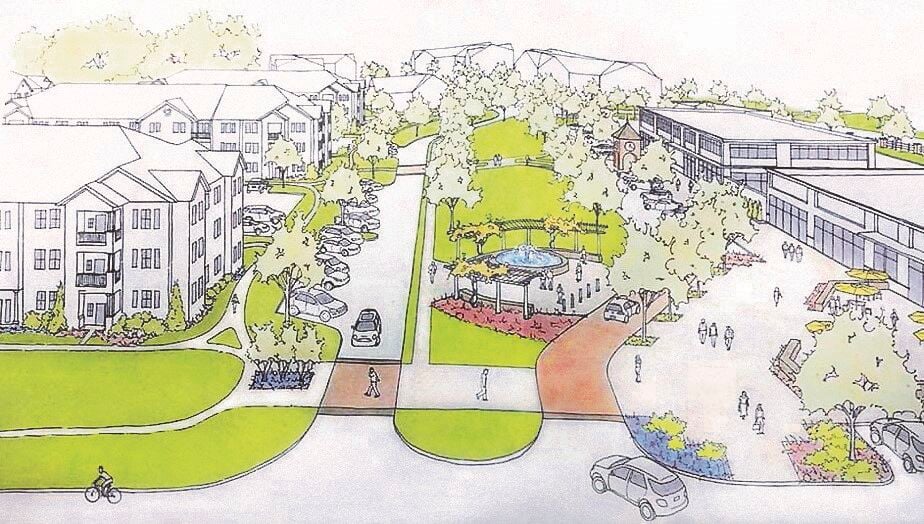 This rendering shows some of the concepts that may make up a plan to develop Millersville Town Center. 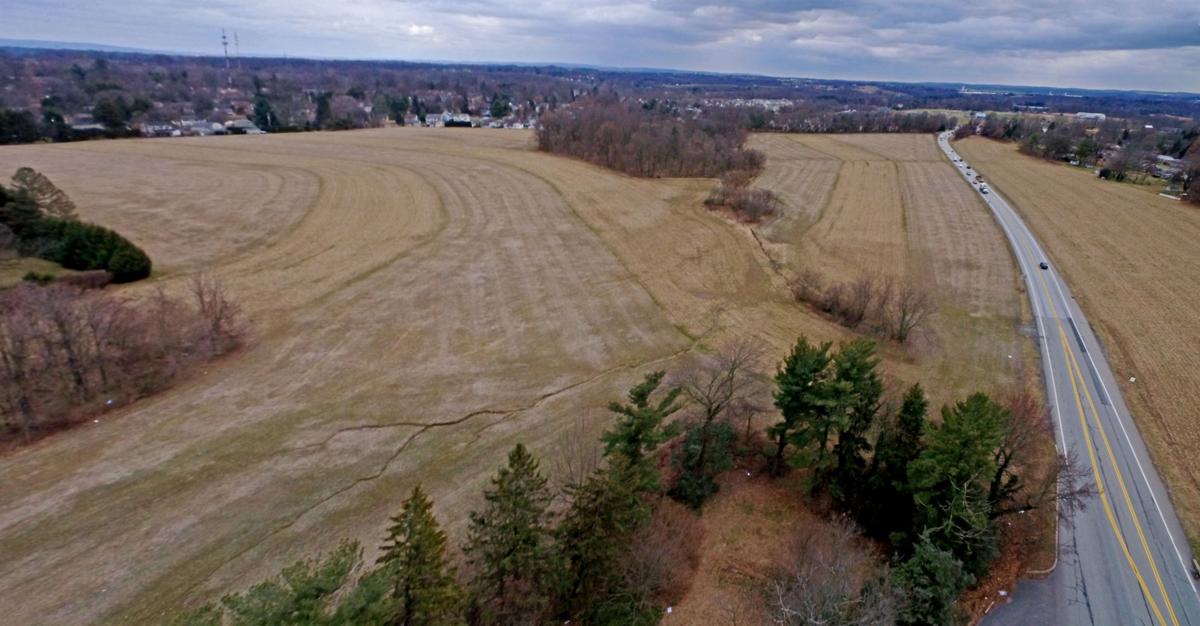 Plans are being prepared for development of 57 acres at the intersection of Route 999 and Route 741 in Millersville Borough. This photo was taken Monday, Jan. 27, 2020.

A developer is floating a plan that could add the population equivalent of Adamstown Borough to a 58-acre farm field in Millersville.

The current proposal for Millersville Town Center at routes 741 and 999 includes 55,000 square feet of new commercial space alongside 561 housing units, representing an unprecedented opportunity to reshape a borough centered on its namesake university.

But the plan to accommodate up to 2,000 residents in a mix of single-family, townhomes and apartment buildings is forcing borough officials to grapple with how far they will bend their land-use rules to accommodate development, and whether the trade-offs would be worth it.

“It has the potential to bring more resources, maybe a restaurant, shop or more businesses, which could improve the vibrancy of Millersville,” said Lauren Hauck, a member of borough council and the planning commission. “But being such a large parcel, it has the potential to impact a lot of things negatively as well, so we want to be careful about it,” she said.

The early discussion about Millersville Town Center includes qualms about adding to traffic congestion, concern about big apartment buildings instead of single-family homes and questions that come with plans to turn a piece of open space into a mini town. In these respects it illustrates a central issue in Lancaster County land use policy — the practical difficulties of building high density housing on some agricultural land as a way of preserving other Lancaster County farms long-term.

“We have a population growth we’re going to expect in this county over the course of the next 20 years and we have to put those people somewhere. Where does that population go?” said Scott Standish, executive director of the Lancaster County Planning Commission.

“My concern is if we continue to build single family homes on large lots, we’re not going to have much land left by 2040,” he said.

An island of farmland

Once a rural section of Lancaster Township, the parcel became part of Millersville Borough in the early 1970s when it was included in an annexation pushed for by residents of Quaker Hills, the neighborhood just to the east. Residents made the change because they wanted the borough’s cheaper sewer rates.

While a spur road was built from Quaker Hills into the tract, ranch homes on quarter-acre lots typical of Quaker Hills’ 1950s- and 1960s-era development were never built there.

The property was bought in 1996 by Gerhard Riethmuller, a native of Poland who became a land developer in the Allentown area. Riethmuller died in 2003 and the property is now controlled by his wife and son. Efforts to reach them were unsuccessful.

Our Town Millersville: Manor Township village that grew into a borough now dominated by university life

Mike Tuscan, the borough’s code enforcement and zoning officer, said the property, which has been leased to a farmer for years, has long been eyed for something else.

“I’m here nine years now and ever since I’ve been here, I’ve had calls all the time about that land, people trying to develop it,” he said.

The current plan is from Burkentine Builders, which has a sales agreement to buy the property, pending necessary approvals. The Hanover-based company, which is helping develop the Riverside Foundry apartment and townhome complex in Marietta, declined to answer specific questions about their interest in the Millersville property, or their approach to the property.

“We are very early in the concept and design phase and have not formally submitted any plans with the borough at this time,” a company spokeswoman said. “However, we are very excited about the project and are looking forward with engaging with the borough, its staff and the public as we continue through the development process for the best plan.”

Yet even without a formal proposal, representatives of the developer have been describing it to borough officials and seeking feedback on what would be acceptable.

Most recently, Joel Snyder of RGS Associates briefed the borough planning commission in September on the latest version of the plan which had been revised to add more single-family homes as well as more open space and park areas.

Because of the extent of the commercial areas being proposed as well as the size of the apartment buildings, even the latest plan doesn’t fit with current zoning for the property, and would require a zoning change.

During the hour-long planning commission meeting Sept. 2, Snyder emphasized that the discussions were meant to gauge the receptiveness of officials to needed changes before a formal plan would be submitted, which he said was not a guarantee.

“We may or may not get to that point,” he said. “It is not our intent to try to force something on anybody at this point.”

Brooke Magni, a borough council member who lives in Quaker Hills, said she would ultimately like to see a version of the plan without the four-story apartment building. And she wants to understand more about the impact on traffic.

“People are very nervous about it, let’s just put it that way,” she said. “I think there’s a lot of apprehension, and especially as council we want to make sure we do what’s best for the community.”

The tract that would become Millersville Town Center is residential and has the borough’s “traditional neighborhood” overlay, which allows for denser housing as well as limited commercial uses. It is also within an urban growth area designated by Lancaster County planners as an appropriate location for development.

If a formal plan is submitted for Millersville Town Center, county planners will officially weigh in on its merits.

While he doesn’t know all the details, Standish said Millersville Town Center is the kind of development his department advocates for since it has a mix of single-family homes, townhomes and apartments to concentrate people in an area that makes sense for development.

“There’s very few vacant, buildable lands within the urban growth areas today," he said. “Nobody wants to see those boundaries expanded. You can’t have your cake and eat it too. You have to build more compactly, with more diverse (housing types). And we have to go up instead of out.”

And Standish said replicating the single-family homes in adjacent Quaker Hills is not the wisest use of the land. Nor is keeping the land as a farm since it is “totally surrounded” by development.

“Long term, that’s not a viable farm anymore,” he said. “Ultimately that is the perfect place for infill and redevelopment.”

Such enthusiasm isn't quite matched at the borough level.

“It’s still more dense than our ‘traditional neighborhood overlay’ calls for, but it is in line with the county planning growth area, so I think it’s going to continue to be a bit of a discussion,” Hauck said.

For Lamar Zell, a 56-year-old Millersville native, the current plan falls short of that standard. Zell, who now lives along Route 741 just north of the proposed development, said he thinks the housing looks “crammed in.”

While he says it’s not reasonable for the tract to stay a farm forever, he said the current proposal feels out of place.

“I don’t think that looks like Millersville,” he said.