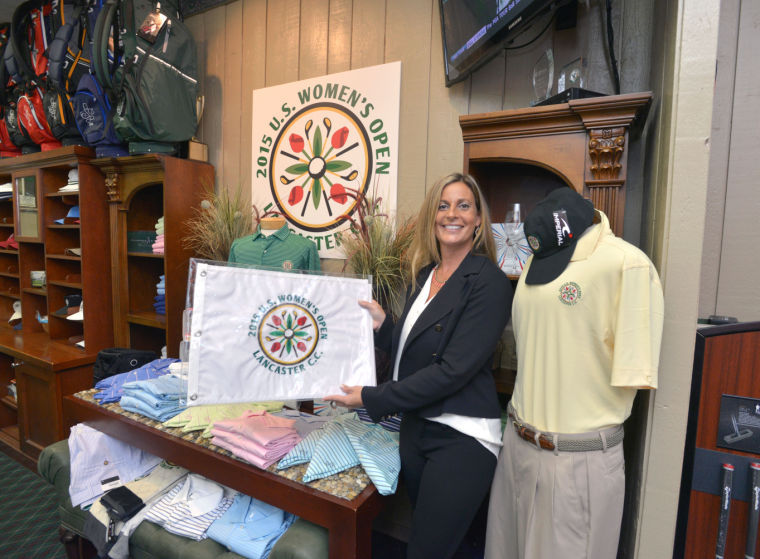 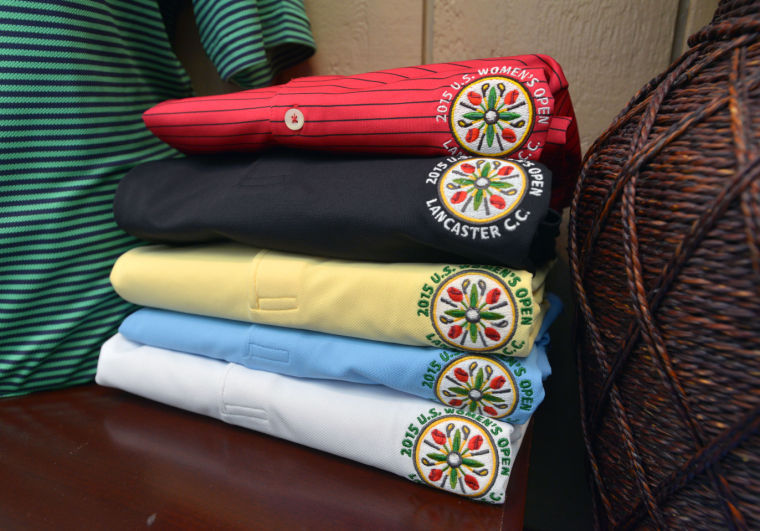 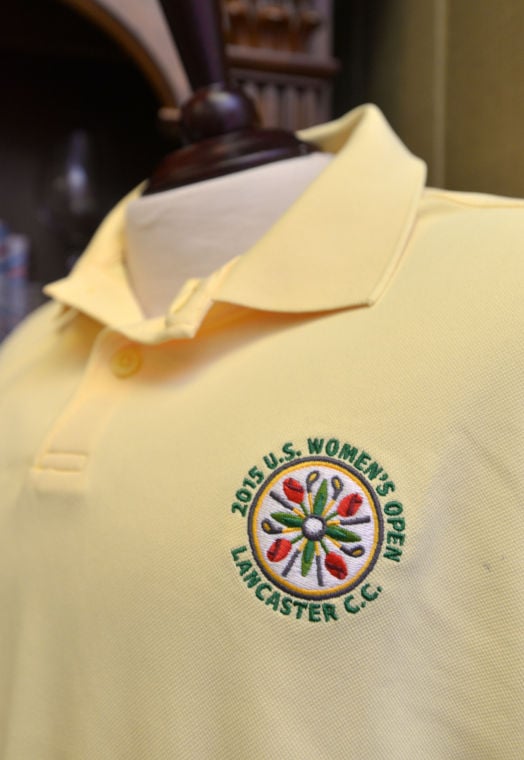 This is an example of the shirts for sale that commemorate the 2015 U.S. Women's Open. 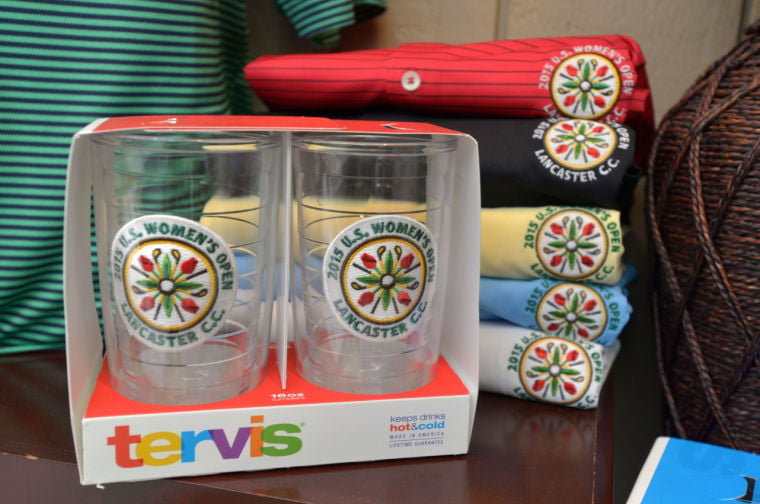 These glasses and shirts are among the merchandise for sale that celebrates the 2015 U.S. Women's Open.

This is an example of the shirts for sale that commemorate the 2015 U.S. Women's Open.

These glasses and shirts are among the merchandise for sale that celebrates the 2015 U.S. Women's Open.

Sure, the 2015 U.S. Women’s Open at Lancaster Country Club will be a national, prestigious golf event.

But like any major national sporting championship, watching the athletic competition won’t be the only activity.

And befitting such a high-caliber tournament, those other pursuits will be high-end too.

There’ll be dining. And socializing. And shopping — definitely plenty of shopping.

Shopping, said Barry Deach, championship director for the 2015 U.S. Women’s Open, “is a big part of the championship experience for fans.”

For the event next July 6-12, the New Holland Pike club will have a merchandise pavilion in an 8,000-square-foot temporary structure.

The pavilion, said Harlene Udovich, director of merchandise for the event, will be a miniature, high-end department store.

Its ambiance will belie its temporary existence.

The pavilion will have carpeting, air conditioning and top-of-the-line fixtures, displaying a selection of about 200 items.

Some items will be “co-branded” with the logo of United States Golf Association too; the USGA is the group that holds the U.S. Women’s Open.

Udovich is going to great lengths to have a diverse mix of merchandise in that pavilion.

“I’ll have something for everybody,” said Udovich.

She means that literally.

Though the 14-year veteran of golf-event merchandising is in the early stage of selecting 2015 U.S. Women’s Open items, there are some staples.

Customers will be able to get some apparel personalized with embroided names.

Many other decisions have yet to be made.

Some will hinge on what new products are shown by golf-event suppliers next January, at the industry’s main show in Orlando.

“I will look at different companies and the different lines they have to offer and bring in the most current merchandise that will be available at that time.

“So a lot of it will be product that the general public hasn’t seen yet,” said Udovich.

Factored into her decisions will be her research on successful retailing strategies — products, prices, colors, sizes etc. — in this market.

Deach is confident in Udovich’s ability to pick winners.

“Harlene has got wonderful taste,” he said.

A big part of Udovich’s job is to prepare for the unexpected.

She puts a priority on finding suppliers who can react to strong sales by replenishing inventories quickly.

It’s just hard to predict what those fast-selling items might be.

Low temperatures and rain at the 2004 PGA Championship at Whistling Straits in Haven, Wisconsin, made sales of windbreakers and blankets surge.

At this year’s Women’s Open in Pinehurst, North Carolina, commemorative glassware was an unusually big seller.

“There’s always one or two surprises the week of a championship,” said Deach.

Sometimes purchases are practical, like buying a windbreaker on a chilly day.

But often the motivation is the memory associated with the merchandise, said Deach.

“It’s part of the commemoration. It’s a keepsake. It’s like saving the ticket from a favorite rock concert,” he said.

For some golf fans, a purchase at a major tournament sparks a long-term interest in acquiring such items as collectibles, observed Deach.

The vast majority of the 2015 U.S. Women’s Open merchandise that’s sold will be sold at the pavilion during the week of the tournament.

A small selection of the 2015 U.S. Women’s Open merchandise, all with the event logo, is available now at the Lancaster Country Club pro shop.

Items in stock include:

The pro shop’s selection of 2015 U.S. Women’s Open merchandise will broaden in the months ahead.

A small selection also will be available on the USGA website, said Udovich.

Udovich declined to estimate how much merchandise might be sold at the week-long event next July, which is expected to draw up to 100,000 fans.

She would only say that she was optimistic sales would exceed the average for the Women’s Open, declining to share that average as well.

However, given that it will cost “tens of thousands of dollars” to ready the merchandise pavilion, according to Deach, the volume of sales must be a hefty figure.

To move that merchandise will require many hands. That’s where volunteers come in.

The volunteers for the pavilion will be led by Jay Filling, co-owner of Filling’s Clothing in Lancaster and an avid golfer.

“They’re a huge portion of the merchandise operation. It doesn’t function without them. They play a very important role,” said Udovich.

“They’ll do everything from running a cash register to bagging merchandise to helping to fill the shelves.”

Udovich said it’s too early to know what kind of structure will house the merchandise pavilion.

In recent years, the Women’s Open merchandise pavilion has been a sleek, white fabric building with windows, a peaked roof and double-doors.

With a footprint of 8,000 square feet, the pavilion will be roughly comparable in size to the Gap or American Eagle stores at Park City Center.

Next to the pavilion will be a “check tent,” said Deach.

That’s a place of about 800 square feet where customers can leave their newly purchased merchandise for the rest of the day, then claim it when they leave.

Udovich, 39, of Palm Beach Gardens, Florida, comes to her role for the 2015 U.S. Women’s Open thoroughly prepared after 14 years with the PGA in merchandise roles.

She left as merchandising manager, responsible for running all merchandise-related activities of the PGA’s major events, the same role she’s filling for the 2015 Open.

Tim Mekeel is the Lancaster Newspapers business editor. He can be reached at tmekeel@lnpnews.com or (717) 481-6030. You can also follow @tmekeel_lnpnews on Twitter.