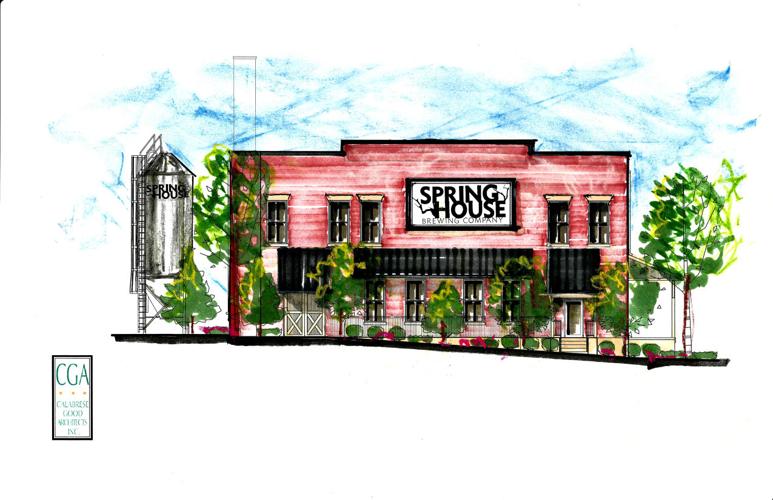 This is a rendering of Spring House Brewing's future city location. The rendering was provided by Calabrese Good Architects. 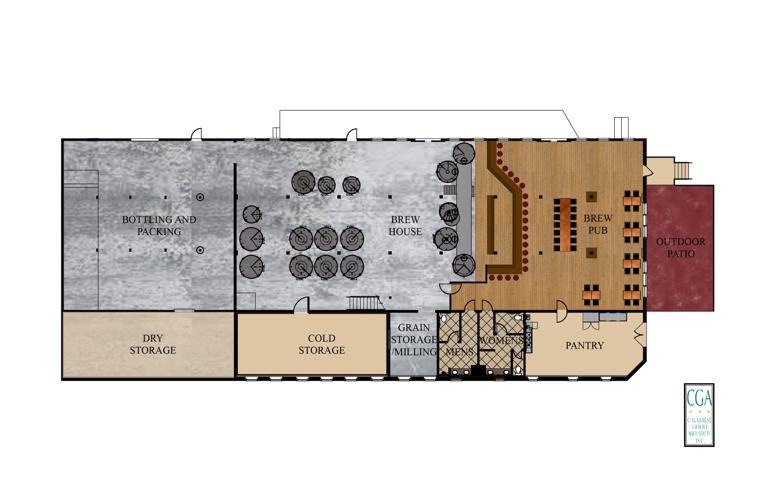 This drawing shows the floor plan of Spring House Brewing's future location on Hazel Street. The plan was provided by Calabrese Good Architects.

This is a rendering of Spring House Brewing's future city location. The rendering was provided by Calabrese Good Architects.

This drawing shows the floor plan of Spring House Brewing's future location on Hazel Street. The plan was provided by Calabrese Good Architects.

Next May or so, Matt Keasey will be able to take his foot off the proverbial brake.

That’s when Keasey will no longer need to ration how much of his Spring House Brewing beer he sells to his wholesale distributors.

By then, Spring House Brewing’s new city brewery and brew pub will be operational, replacing a smaller brewery in Conestoga.

“(Wholesalers) always try to get a little more out of us. ...

“Hopefully in six months, we’ll be able to give them what they want and have the capacity to open some new markets too.”

Keasey took a major step toward that goal last week when his company bought its future home at 209 Hazel St. for $480,000.

A new brewery to be built in the idle city property will be capable of producing 10,000 barrels of beer annually.

That will be more than triple the Conestoga location’s capacity of 3,000 barrels.

The new brewery will be complemented by a brew pub of 150 or more seats.

Renovations and equipment for the Hazel Street facility, on top of the price of the property, will push the total project cost beyond $2 million.

City zoners in May approved a special exception to allow a brewery at the property, which is zoned for manufacturing.

The Hazel Street building is a 27,200-square-foot, two-story warehouse constructed in 1901.

It’s been vacant but most recently housed a roofing company.

To create space for the brewery tanks and the brew pub, Spring House Brewing will remove two-thirds of the second floor and several walls.

That will providing sufficient height and width for the tanks plus space for the brew pub.

“We’re going to really open it up,” said Keasey this week.

A second, smaller building of 10,000 square feet on the rear of the property will be used for cold storage.

With the added space will come added jobs.

The brewing staff — now Keasey and two employees — will grow by a half-dozen employees. The brew pub will have a staff of 25.

With the move to the city, the Conestoga site will be idled, although Keasey said brewing might resume there at some point.

Down the road, the Hazel Street brewery’s capacity could be doubled too, if demand warrants.

Spring House Brewing, established in 2007, has had a capacity conundrum fermenting for some time.

“We started noticing about two years ago that we couldn’t stay (in Conestoga) and stay sane...,” said Keasey.

“We just outgrew the space we’re in. The demand got so great. We’re producing as much as we can, but we can’t keep up. And we don’t have the physical space here to add tanks.”

With demand surpassing supply, Spring House Brewing has had to limit how much it will sell to its wholesalers.

Despite the strong demand for his beers, Keasey intends to increase production gradually.

He envisions seeing the Hazel Street brewery hitting its maximum output in its third year of operation.

By that time, if all goes well, he’ll be studying whether to increase the site’s capacity to 18,000 or 20,000 barrels annually.

“We want to have controlled growth,” said Keasey.

Spring House Brewing will continue to operate its taproom in the Hager Building, 25 W. King St.

Handling the sale of the Hazel Street property were Deepa Balepur and Rich Wolman of Compass Real Estate and Tom Troccoli of Bennett Williams Realty.

Helping to fund the Spring House Brewing expansion are a $975,000 loan from Union Community Bank and a $780,000 loan from the U.S. Small Business Administration’s 504 program, obtained via EDC Finance.