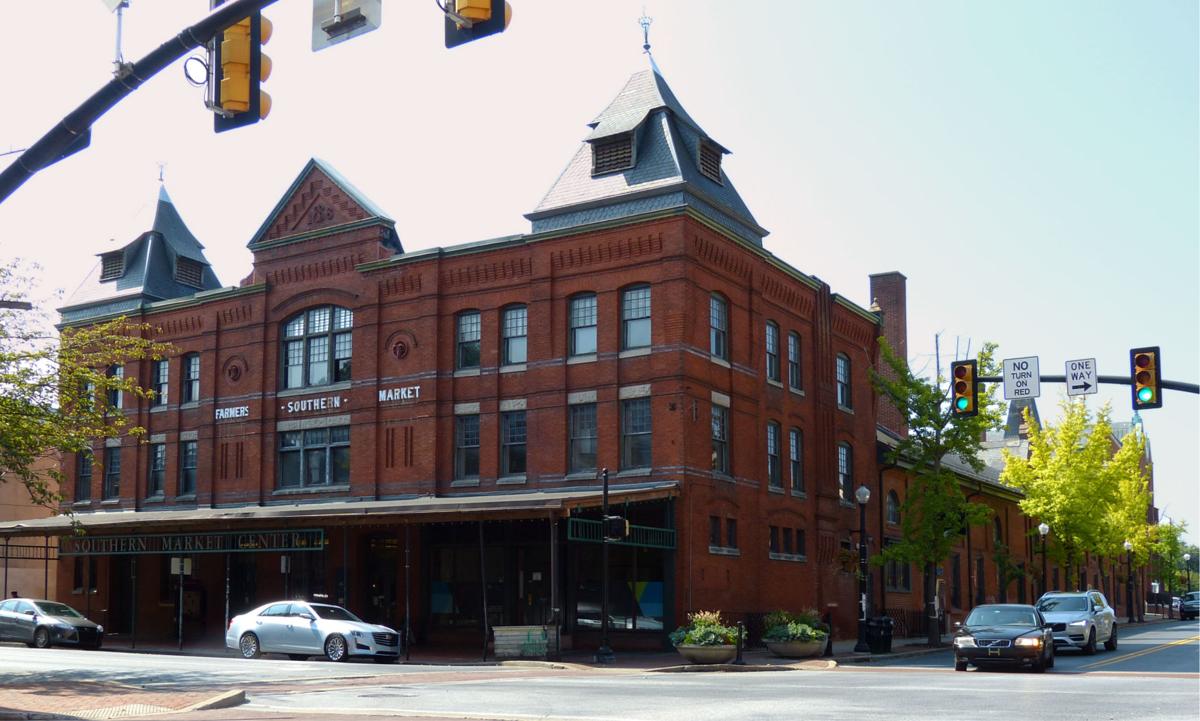 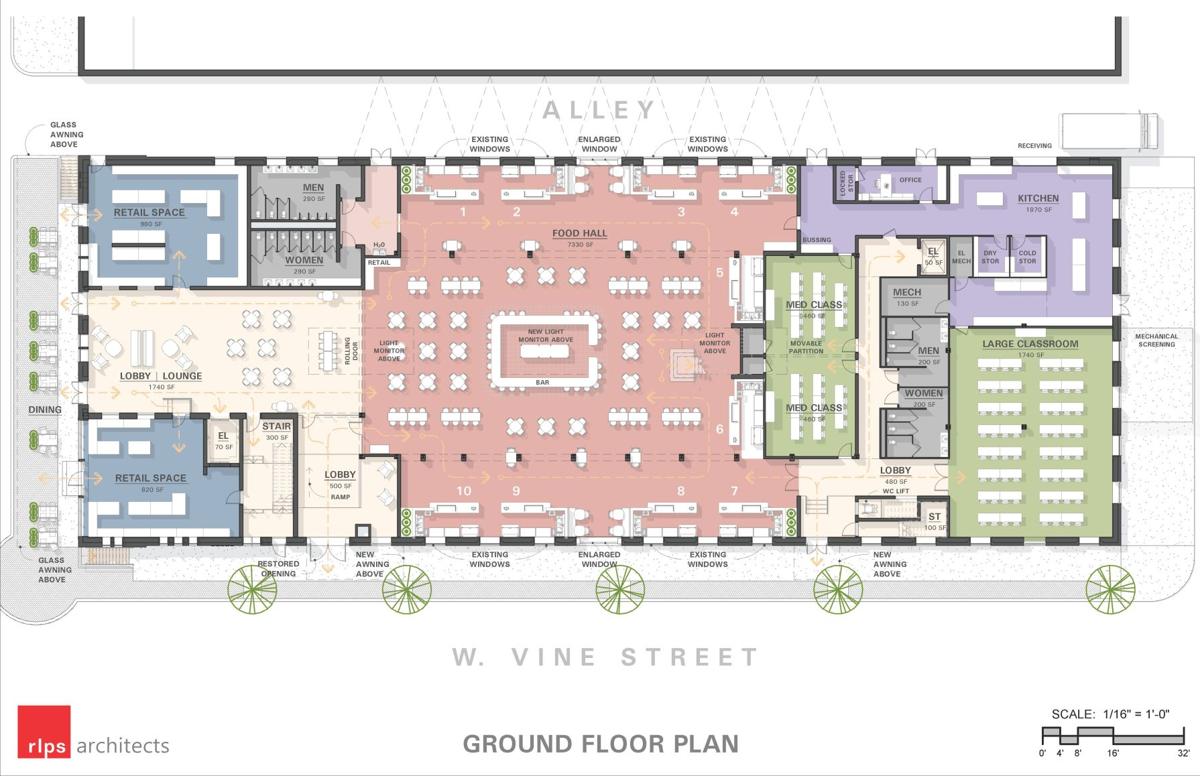 This floor plan depicts the layout of Southern Market's ground floor, with a food hall in the center, two stores on the Queen Street side and classrooms/meeting rooms (large and medium size) and a commercial kitchen on the Beaver Street side.

This floor plan depicts the layout of Southern Market's ground floor, with a food hall in the center, two stores on the Queen Street side and classrooms/meeting rooms (large and medium size) and a commercial kitchen on the Beaver Street side.

A food hall proposed for historic Southern Market Center, unveiled a year ago, is expected to be an engine for economic development.

When it opens in spring 2021, the food hall is envisioned as a community attraction and a business incubator for a diverse group of budding chefs and vendors, and their employees.

Now the two nonprofits behind the plan, Willow Valley Communities and Lancaster Equity, have disclosed what would serve as the spark plug for this engine:

A bar, operating under a cut-rate kind of liquor license known as an economic development license — the first such license in Lancaster County and only the 41st in Pennsylvania.

The two partners revealed their plan for a food-hall bar on Tuesday when they asked City Council to support their bid for the state license.

"A liquor license is only one component of the overall redevelopment vision, but it is an essential component to ensure the viability of the business model at Southern Market," Chris Delfs, the city’s Director of Community Planning and Economic Development, told council.

Ephrata-based Royer Pharmacy to close its 5 stores this month; CVS to get prescription files

Willow Valley and Lancaster Equity also detailed the scope of the Queen and Vine streets venture for the first time, fleshing out features that were announced a year ago as concepts.

The food hall will have up to 10 chefs/vendors, about 68 employees and up to 175 seats. It will anchor a rejuvenated Southern Market, to be redeveloped in a project costing more than $4 million.

Chefs/vendors selected for the food hall will be local people with talent and drive, but not much experience or financial backing, who reflect the city’s cultural diversity.

The chefs/vendors getting their start in the food hall and their employees will be able to get their culinary training at Southern Market. The training will be open to the public too, in an effort to address an industry-wide shortage of skilled culinary workers.

In addition to the food hall, the building’s mix of uses will include two stores (as yet undetermined), up to 18 private offices for coworking, six art/maker studios and three classroom/community rooms. The rooms will be used for that culinary training, as well as career development, startup business support and other purposes.

Willow Valley and Lancaster Equity believe the food hall, coworking offices and art/maker spaces will be popular with people who visit, work and live in the city, but especially with a certain group of new arrivals.

That group will be the residents of a 150-unit apartment building Willow Valley is planning to develop across the street, on the former LNP Production Building site, as was previously reported.

“This is an amenity that ultimately is going to benefit our residents as well as the total Lancaster community,” said John Swanson, CEO of Willow Valley Living, which manages the Willow Valley retirement campuses.

Swanson, speaking to LNP prior to the council meeting, declined to disclose a timetable for the housing project or reveal its cost, height and other details, saying those remain under discussion. He said he hopes to have more to share with the public “in the coming months.”

Lancaster Equity is a collaborative community development corporation formed to fight poverty in the city.

Lancaster Equity bought the market building last year from the city Redevelopment Authority for $800,000, a sum which is coming entirely from Willow Valley.

Willow Valley, which has one of the nation’s largest continuing care retirement communities in Willow Street, with 2,400 residents, also is funding the renovations and managing the building under a master lease.

Willow Valley and Lancaster Equity see a bar in the food hall as a way to draw customers and generate profits that would subsidize the chefs/vendors’ rents and support the cost of live events in the hall.

Bar profits also would help compensate for the fact that community organizations that will rent space in Southern Market will do so on a discounted basis.

Obtaining an economic development license for that bar would make that financial goal much easier to reach because the license would only cost $50,000, a price set by state law.

“That’s part of our reason for going in for the economic development liquor license. That brings down the overall cost of the project,” said Swanson.

“Everybody wants this to be sustainable, not just from a vendor perspective, but from an operating perspective,” he told LNP prior to the council meeting.

While the type of license is “an important piece” to the financial side of the food hall, so is simply having a bar.

“We’ve talked to numerous food hall operators around the country and asked them how important it is to have a bar in the food hall.

“They’ve all said the same thing: it’s absolutely critical for driving traffic to the food hall. It creates a better overall experience.”

Because these licenses are such a relative bargain, state law makes them relatively hard to get.

To get one, an applicant needs to show its bid has the support of the municipality where the licensed activity would be located; Tuesday’s vote got the bar-license applicant Willow Valley over that hurdle.

The next will be demonstrating “that it has exhausted reasonable means of acquiring (an existing) license in the county,” according to the state Liquor Control Board.

For instance, the applicant must show that it reached out to the holders of at least 50 percent of the existing licenses in the county to see if they were available to purchase.

Lancaster County has 200 active restaurant liquor licenses, the kind Willow Valley is pursuing, said LCB spokesman Shawn Kelly. So it will have to show the LCB that it reached out to the holders of at least 100 of them.

Willow Valley also will have to show that it tried to buy each of the 27 restaurant liquor licenses in Lancaster County now in safekeeping (meaning, they’re not in active use).

Southern Market, the first major structure designed by renowned local architect C. Emlen Urban, opened in 1888. It stopped operating as a market in 1986.

Two years later, the Lancaster Chamber, some city offices and City Council chambers moved there. City functions left for City Hall in 2014 and the chamber left for East King Street in 2017.

A revitalization plan surfaced in 2018 when Lancaster Equity, the nonprofit Assets and two local entrepreneurs unveiled a plan for a food hall, two restaurants, an education center and other uses there.

Last year, the two entrepreneurs stepped down; Willow Valley stepped in and took a lead role, partnering with Lancaster Equity.

Assets, which has temporarily relocated its Southern Market offices to the historic Jasper Yeates house at 24 S. Queen St. so renovations can get done, would return as a tenant along with its Lancaster Works social enterprise employment agency.