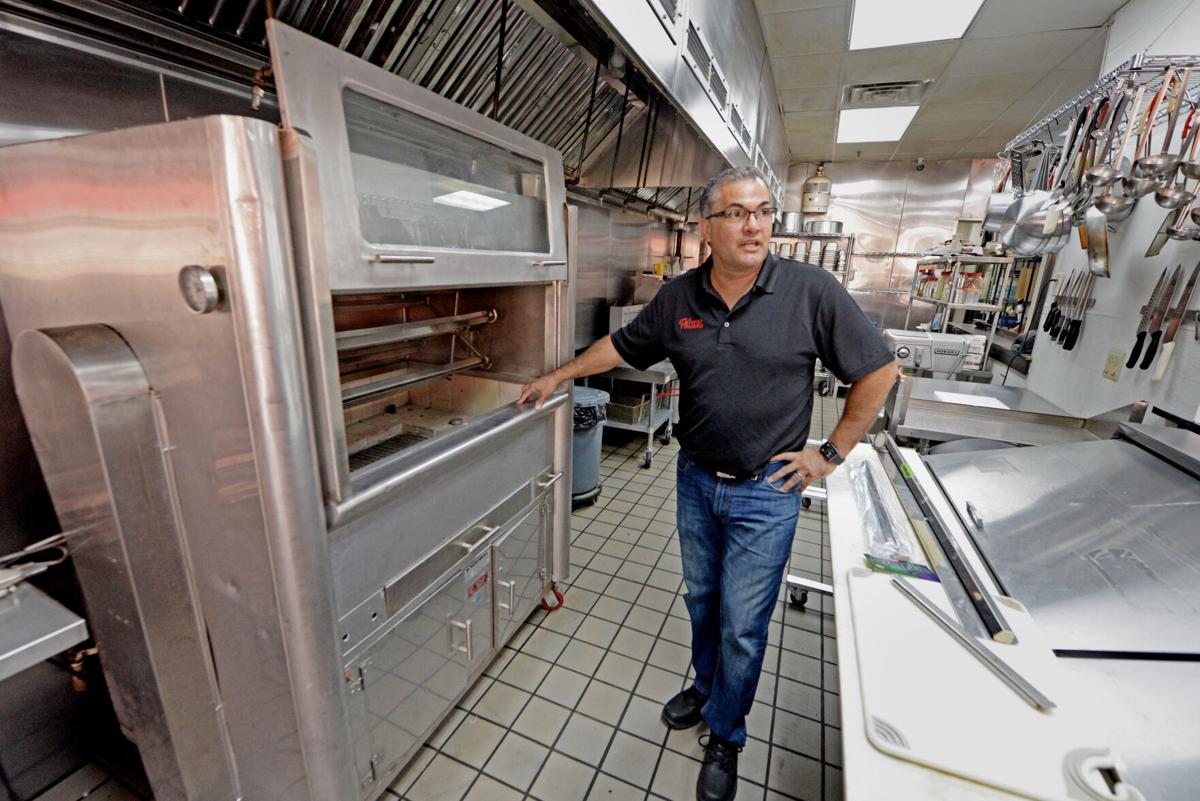 After being laid off in March from his job at the downtown Lancaster Holiday Inn, Francisco Gomez de la Torre has been working toward his dream of opening his own restaurant. Here his is with the charcoal fired rotisserie oven in the kitchen of Frisco's 454 New Holland Ave., which is slated to open sometime in October. 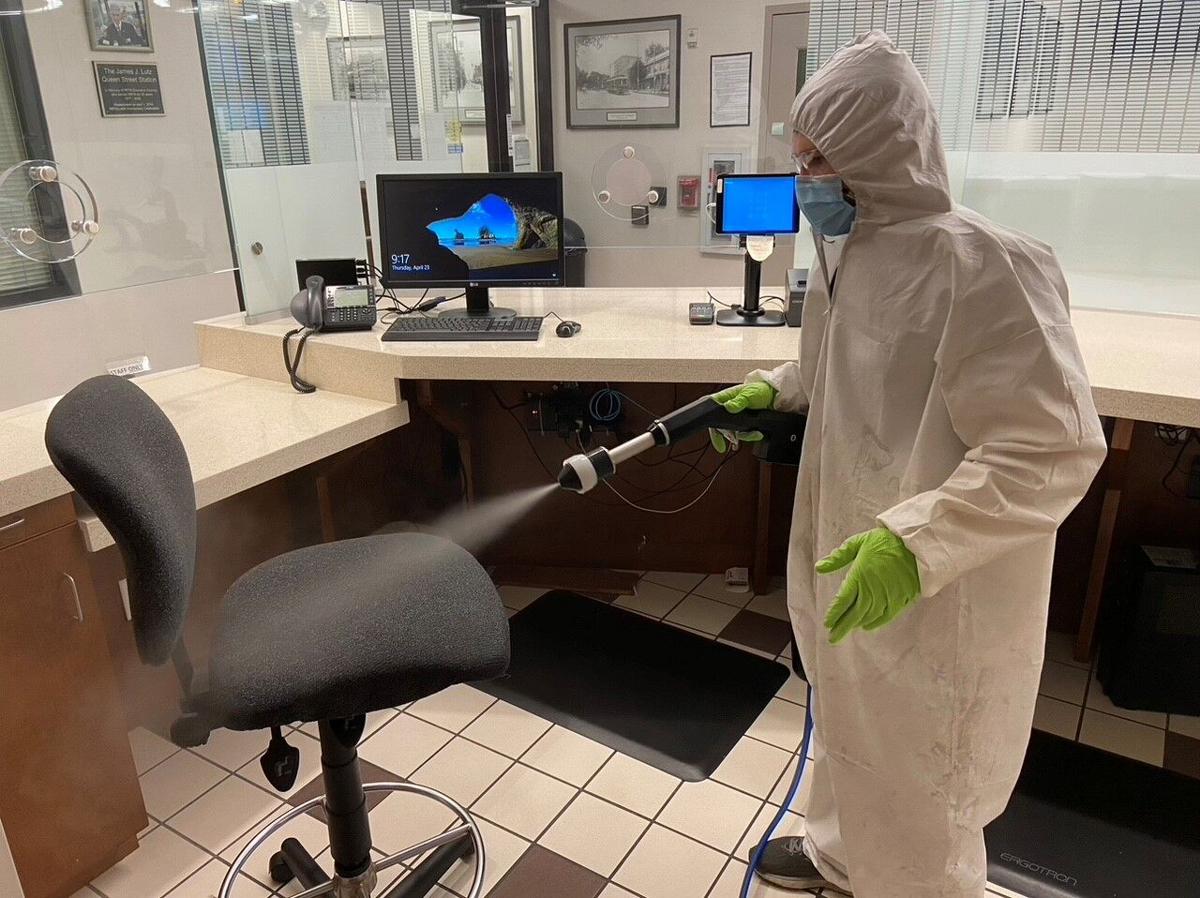 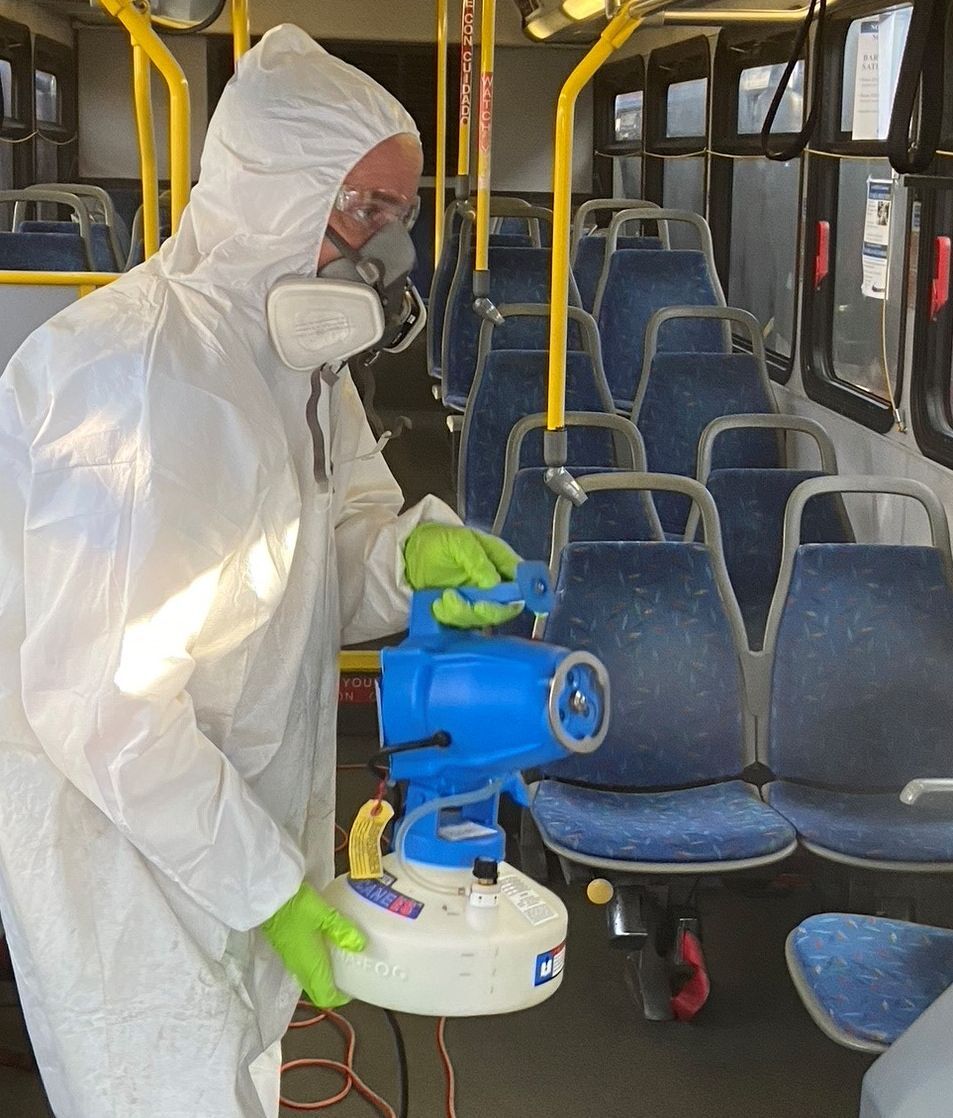 After being laid off in March from his job at the downtown Lancaster Holiday Inn, Francisco Gomez de la Torre has been working toward his dream of opening his own restaurant. Here his is with the charcoal fired rotisserie oven in the kitchen of Frisco's 454 New Holland Ave., which is slated to open sometime in October.

From that first job 18 years ago at a hotel in Lexington, Kentucky, Gomez de la Torre built a career as a hotel manager that helped support his family in Peru, and eventually allowed him to bring his wife and daughter to live with him in Lancaster. Then last year, after years of commuting from Lancaster to hotels in nearby cities, he got a job as a conference manager at the downtown Lancaster Holiday Inn.

But in March, as restrictions designed to limit the coronavirus pandemic brought travel to a standstill, Gomez de la Torre lost that job, finding himself once again back at square one.

“I’m used to rising from nothing. That’s not new to me. I’ve been broke, and I’ve had nothing more than once in my life,” said the 48-year-old West Lampeter Township resident who is now preparing to open Frisco’s, a Lancaster city restaurant that will feature Peruvian-style roasted chicken.

“My job is not coming back,” he said. “Waiting around wasn’t an option. I knew it wasn’t going to come back (to the hotel) anytime soon.”

The coronavirus pandemic and the business shutdowns meant to slow the spread of COVID-19 have forced companies to lay off workers and grapple with some grim economic realities. But the hardship has also forced people and businesses to adjust, sometimes in creative and inspiring ways. One measure of the sweeping changes: A local nonprofit organization that helps businesses set and meet goals has seen a surge in consultations, with numbers up more than 30 percent compared to the first eight months of last year.

“They’re adapting to survive. Some of them are rethinking their whole business model, searching for new avenues, clients, businesses with the idea that change can bring opportunity. So they’re trying to be opportunistic,” said Kevin St. Cyr, the chairman of the Lancaster-Lebanon chapter of SCORE, which offers free mentoring and assistance to small businesses, non-profits and startups.

Can downtown Lancaster recover from its COVID-19 coma?

With business thrust into an unprecedented situation, more entrepreneurs are turning to help from SCORE, which has seen a big jump in demand for help from its 80 volunteers. From January through August in 2019, the group conducted 2,681 mentoring sessions. During the same period this year, the number was 3,564, a jump of 33 percent.

And St. Cyr said that while the group counseled fewer owners of startups during early months of the pandemic, they’re seeing the return of people wanting advice on launching new ventures.

“Whether it’s down times or up times, if they’ve got the will, they’re finding a way,” he said.

Looking to clean up

As the pandemic shut down businesses and made people leery of letting strangers into their homes, some regular customers of Mount Joy-based Newly Restored suddenly didn’t need the company’s cleaning services.

“We were kind of dead in the water. Even though we were classified as an essential business, we really weren’t doing much,” said Kapp Brown, who owns the six-year-old business with his wife, Linda.

As work slowed down, Brown, who previously worked in publishing, consulted with SCORE and recalled a specialized disinfecting service he had very occasionally done for fitness centers that utilized a low-volume fogger.

Seeing a possible need for similar deep cleaning, Brown got some necessary training and scoured the internet for a place to buy the specialty equipment to do the work. He eventually bought some used equipment from a cleaning company in Gap.

Forced to survive through shutdowns, Lancaster County's small businesses get ready to rebound

After investing in training and equipment, Brown still had to find some customers, which led to rounds of cold calls.

“Yes, there was a little bit of apprehension. That’s kind of what motivated me to make some calls,” he said.

Eventually, his efforts started to pay off, including with a contract to clean and disinfect Red Rose Transit Authority buses as well as its downtown Lancaster bus station. Other new customers have included Dutch Wonderland and Shady Maple.

“The disinfecting has kind of filled a huge void in the bottom line of where the company is at this particular point that has allowed us to breathe a sigh of relief,” he said.

Even when the pandemic eventually fades, Brown is hopeful about demand for a cleaning services he says can help companies keep employees healthy by keeping offices clean.

“There are a lot of viruses out there that are not affiliated with COVID that affect the productivity of the workplace,” he said.

As he moved around to different hotel jobs in his adopted country, Gomez de la Torre said he nurtured the idea of one day starting a restaurant that featured food from his native Peru.

But he usually had more pressing needs.

“The idea was to make money here and pay back my debt, pay back my brother, my other brother and support my family down there,” said Gomez de la Torre, who had borrow money from family members to make the trip to the United States.

Gomez de la Torre said he was originally motivated to immigrate at 30 years of age by the birth of his daughter, who was a toddler when he left. He was driven by the thought that might not be able to support her with a finance job in Peru, where he said bank consolidation was forcing many people out of their jobs.

“It’s well known around the world that the U.S. is a country of opportunity. That's what I thought. I wanted to have an opportunity to live a life and provide for my family. That was my motivation,” he said.

For the first eight years, his wife and daughter remained in Peru as he got a series of hotel jobs, first in Kentucky and then around the Mid-Atlantic. He moved to Lancaster in 2009 to work at the downtown Lancaster Marriott, which opened just after other Marriotts — including the one he was working at in Manhattan — were laying people off because of the Great Recession.

“As soon as I got to Lancaster, I called my wife and said, ‘This is it. Now you can come. This is the place where we want to raise our daughter,’” he said.

“We try as much as we can to fit in and go along with what the American way is, without forgetting our roots. Part of it is our food. We love our food,” he said.

When he lost his job this spring, Gomez de la Terra says he immediately saw it as a chance to open a restaurant that would feature some unique Peruvian fare. He had been meeting with SCORE even before he lost his job.

“I’ll be honest, I thought it was a beautiful opportunity for me to do something, which is this,” he said.

This is only the beginning of Lancaster County restaurant closures; here's why

As he prepares for the new restaurant, Gomez de la Terra says he is trying to convince his now 19-year-old daughter to join him in his new venture by working as a cashier. The couple also has an 8-year-old daughter, who was born in the United States.

With Gomez de la Torre on the cusp of fulfilling another dream of becoming a restaurateur, he says he is not worried about debuting during a time when restaurants are still limited because of restrictions meant so slow the spread of COVID-19.

“If I had to wait for the perfect condition, then I wouldn’t have done anything of what I’ve done,” he said. “This (pandemic) is just temporary. This is going to go away. … As this goes away, I will be going up.”

The former Brancyn’s restaurant outside Denver has reopened as Island Time.

The Grocery Outlet Bargain Market in New Holland recently completed renovations inside and outside the store.

Ella Jane Vintage, which features glassware and other vintage home décor items, has opened a retail showroom in downtown Lancaster.

The rate of job losses for Lancaster County residents has leveled off in recent weeks, settling within striking distance of the pre-pandemic norm.

Restrictions meant to slow the spread of COVID-19 have made it a struggle for many Lancaster County restaurants to remain viable, let alone ma…

Mike Sangrey has been putting in some quality time recently helping his dad pour sidewalks, prep patios and install curbing for Sangrey Concrete.