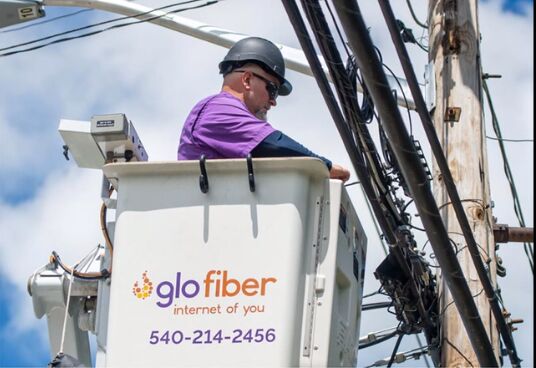 A Shentel employee hangs its Glo Fiber, its fiber optic wire, on a utility pole in Harrisonburg, Virginia. 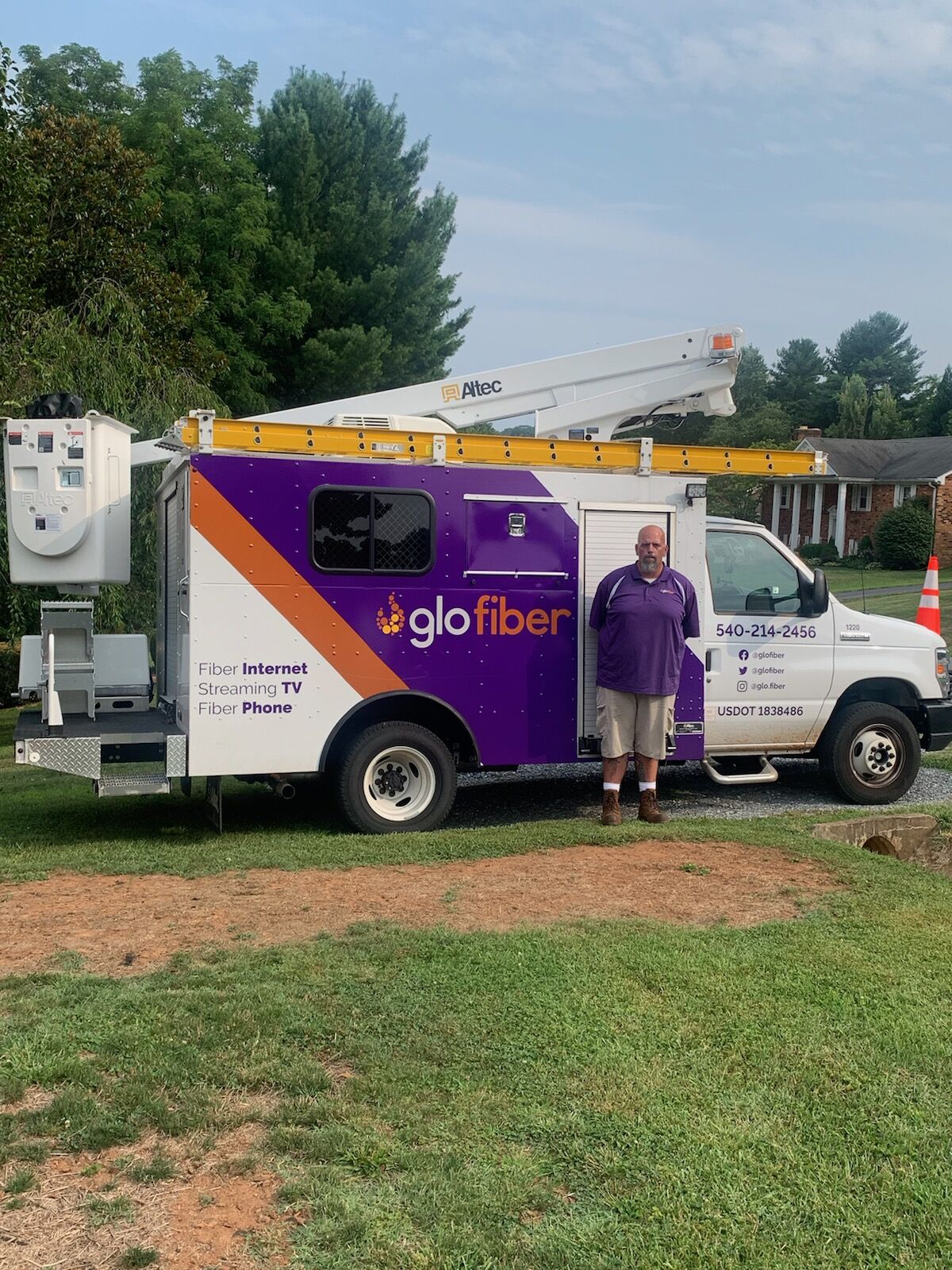 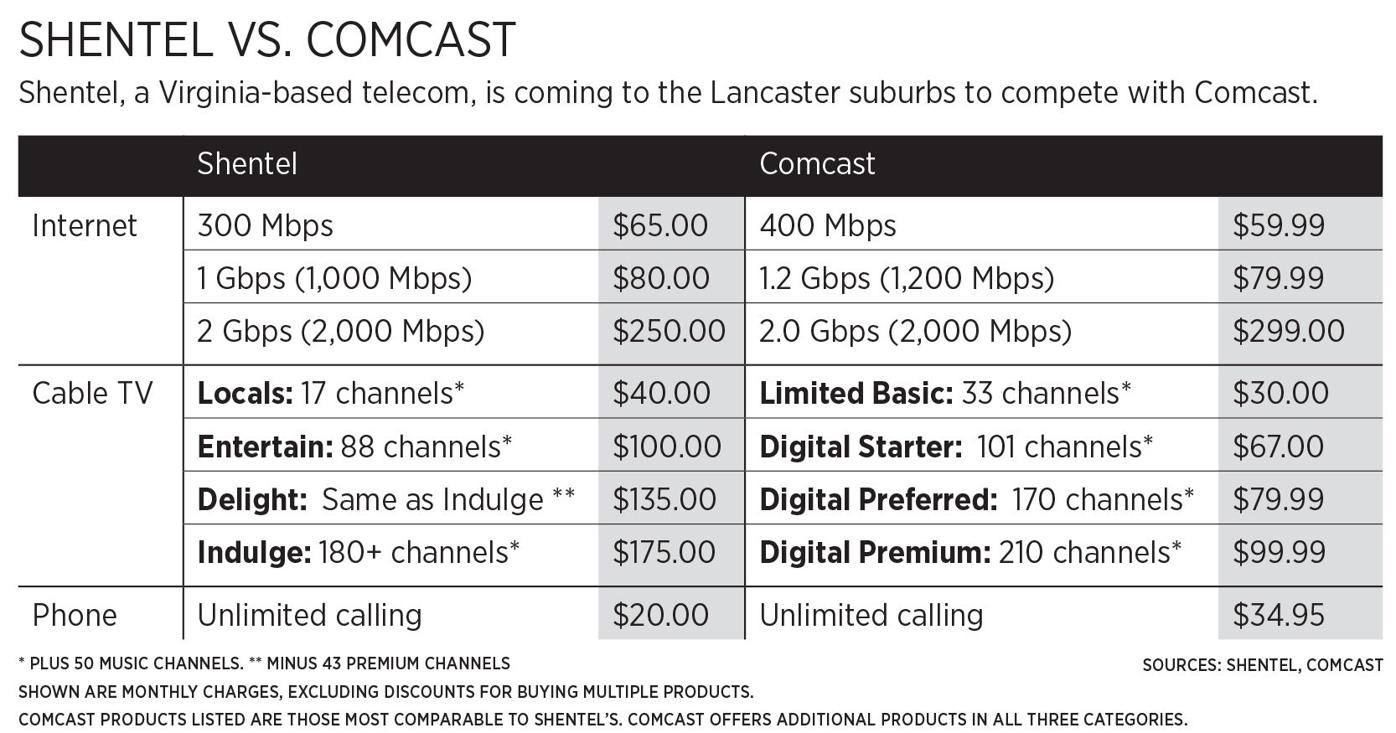 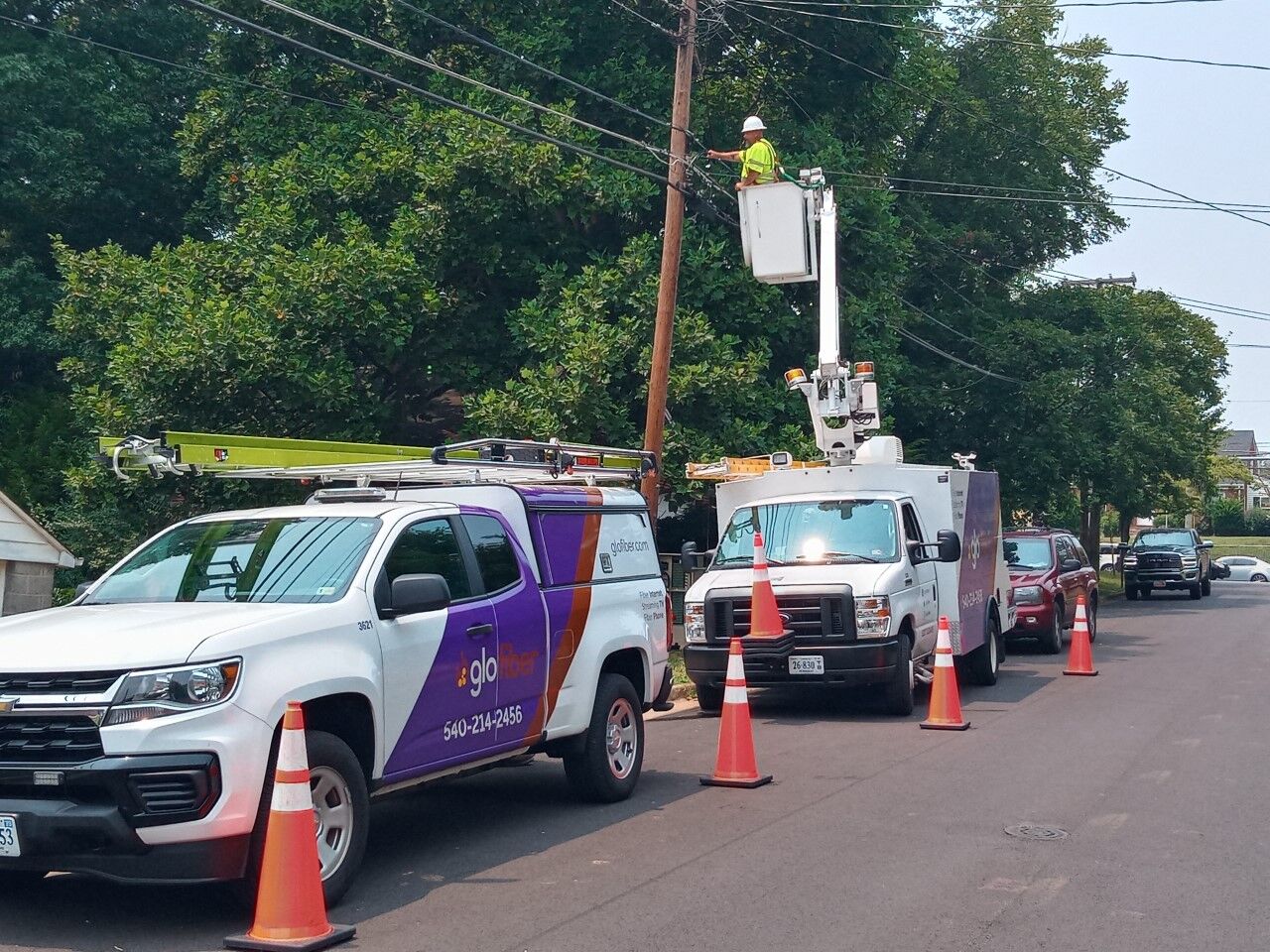 Shentel employees hang its Glo Fiber (its fiber-optic wire) from a utility pole in Lynchburg, Virginia, on Wednesday.

A Shentel employee hangs its Glo Fiber, its fiber optic wire, on a utility pole in Harrisonburg, Virginia.

Shentel employees hang its Glo Fiber (its fiber-optic wire) from a utility pole in Lynchburg, Virginia, on Wednesday.

Television, internet and phone service provider Comcast is getting competition in suburban Lancaster.

A Virginia-based telecom named Shentel plans to spend “tens of millions of dollars” to bring its state-of-the-art internet service, plus its cable television and phone services, to municipalities that ring Lancaster city as soon as 12 to 18 months from now.

“We think that this will be transformative for your community. This is the infrastructure for the 21st century,” said Chris Kyle, vice president of Shentel, to the West Lampeter Township supervisors on July 12.

Shentel has signed franchise agreements so far with Lancaster Township, East Hempfield Township and Mountville Borough, the first of several procedural steps it needs to fulfill in order to start building its own infrastructure here. The company is talking to East Lampeter, West Lampeter and Manheim townships and has alerted West Hempfield Township it’ll be in touch soon.

While Shentel will offer all three services, what telecoms call the “triple play,” its emphasis will be on its “Glo Fiber” internet service, where Shentel believes its entirely fiber-optic network offers significant advantages over Comcast’s.

That means Shentel customers enjoy upload speeds that are equal to download speeds, whereas Comcast customers don’t, according to Kyle. Pure fiber-optic networks are more reliable too, he said, because they have fewer “failure points.”

Business and institutional customers have long valued these “symmetrical” upload and download speeds, Kyle said. Then, with the pandemic forcing students and adults to work remotely from home, that attribute suddenly became critical to residential customers too, he said.

“It used to be that people used their internet at home most of the time in the evenings for downloading Netflix and other videos, pulling data down. But when COVID hit, your house started performing a lot more like a business location,” he said to LNP | LancasterOnline.

While students are headed back to their classrooms, “this (remote) workforce thing is not going away, and to do that, you need people who have this technology in their homes. They need to be able to push this data up, not just bring data down,” Kyle added.

It’s in high demand among businesses and institutions too, he said, making Glo Fiber a powerful economic development tool. “All the larger cities in the U.S. are clamoring for this. We know there’s a market for it, a need for it -- and it’s only going to grow over time.”

Comcast acknowledged that Shentel’s internet infrastructure is constructed differently than Comcast’s, but disputed the significance. Research by The Internet & Television Association showed that uploads accounted for just 6% to 7% percent of internet traffic during pandemic, compared to 5% before the pandemic.

Comcast spokesman Bob Grove said the company “operates one of the world’s largest, smartest, fastest and most reliable fiber-based networks in the country. We compete everyday with providers that offer different technologies, but customers continue to choose Comcast because we offer an unparalleled internet experience that includes gigabit speeds across our footprint, the best WiFi coverage and controls in the home, and a network of more than 20 million WiFi hotspots.”

“Those upload and download speeds are very important to those residents who now work from home and do a lot of uploading of documents and materials,” she said. “So that might grab some people. Great download speed is nice but if I want to have a home office, I need upload speed as well. It makes me more productive.”

Lisa Riggs, president of the Economic Development Company of Lancaster County, a nonprofit that supports business growth here, was encouraged by Shentel’s decision to come to the county.

“We see it as a good sign that they are entering the marketplace and offering consumers and businesses a choice with a fiber-optic product, as we know this option is reliable and provides good speeds,” Riggs said, noting it’s a service the entire county needs.

“Looking ahead, any market that doesn’t offer reliable, rapid and affordable broadband is at a competitive disadvantage from both an economic development and quality of life perspective,” she added.

Shentel, based in Edinburg, Virginia, about 100 miles west of Washington D.C., is targeting Lancaster County and other southcentral Pennsylvania counties largely because it already has laid a foundation here – a fiber-optic backbone built “decades ago” to provide service for Sprint wireless (now T-Mobile).

It’s reached a franchise agreement with Carlisle Borough, Cumberland County, and Hanover Borough and York Township in York County. The company also is pursuing franchise agreements with other municipalities in those counties. Ten days ago, Shentel was picked by York College to provide high-speed internet and phone service at its three campuses.

“We already have a significant investment up there and it just makes sense to leverage it in this way,” Kyle said. Had Shentel not already built this foundation “doesn’t mean we’d never (expand in southcentral Pennsylvania), but (having the backbone in place) absolutely makes it easier.”

Consumers and businesses can expect to be the beneficiaries of an extremely competitive marketplace, especially for internet service – Shentel’s primary focus.

“We believe we’re going to provide an improved internet offering at or below the standard pricing of Comcast …,” Kyle told the East Hempfield Township supervisors at their May 5 meeting.

But that will trigger “more aggressive, competitive tactics from (Comcast),” he predicted. “They’re going to compete very hard for the consumers in your market. And at the end of the day, who wins when businesses compete? Your citizens are going to win.”

Judging from the prices that Shentel and Comcast list for comparable but not identical products, if purchased by themselves, Shentel has an edge in top-speed internet. Comcast has a price advantage with cable TV. (See chart for details.)

But Comcast offers more tiers within a given product category, such as six levels of internet service, including an option for low-income customers, compared to Shentel’s three.

The different volumes of products are the result of different philosophies. “We’re trying to keep it simple,” Kyle explained. Comcast offers many tiers of service in an effort to match consumers’ varying needs.

Comcast also offers related categories such as home security. Both Shentel and Comcast offer discounts when buying more than one product.

As the product lineups vary, so do the sizes of the two publicly held telecoms.

Consider Comcast. Besides having the largest home internet business and largest cable TV business in the country, Comcast also owns NBCUniversal and DreamWorks Animation. With first quarter revenue of $27 billion, it has more than 150,000 miles of fiber optic line and 168,000 employees.

Though it’s a fraction of Comcast’s size, Shentel is plenty big enough, strong enough and experienced enough to handle the expansion in Lancaster County, Kyle emphasized. The 118-year-old firm has been building purely fiber-optic networks for years, he pointed out.

Actually, being a smaller firm has its advantages, Kyle told the East Hempfield supervisors: “We’re not too large, so there’s no bureaucracy, where you don’t know who to get in touch with,” he said.

There it’s the challenger, beginning to construct its own infrastructure in 2019 in West Earl, Warwick and Ephrata townships, and Lititz, Akron and Ephrata boroughs, a region where Blue Ridge has operated for decades. Comcast’s build-out is “essentially complete” in Lititz, Warwick, West Earl and Akron. Ephrata township and borough will be done by year-end.

The six municipal managers where Shentel has reached or is seeking a franchise agreement unanimously embraced the opportunity to give their residents and businesses another choice of internet, cable TV and phone providers.

“I would imagine that the residents would welcome another option to consider and would appreciate some competition. It’s like which grocery store do you want to go to? Some people like Weis, some people like Giant, some people like Wegmans. It’s a personal decision,” said Dee Dee McGuire, West Lampeter manager, voicing a view shared by her counterparts.

Kyle was reluctant to say which other of the county’s 60 municipalities Shentel will approach in the coming months, in hopes of bringing them its “future-proof” technology, except to say that Lancaster city is among them.

Lancaster city has the highest population (about 59,000) and population density (about 8,200 people per square mile) in the county. “From a business point of view, it just makes sense. We want to load up our network (with customers),” he said.

As for the remainder, Shentel is analyzing them for population density and the willingness of municipal leadership to support Shentel’s arrival. Those are the cheapest to serve, shortening the time it would take for Shentel to recoup its investment in infrastructure and turn a profit.

Though Kyle declined to estimate how much Shentel will spend to develop its own network here, other than say “tens of millions of dollars,” he did say that Shentel will invest $700 to $1,200 per every home its network goes past.

“It gets more difficult for us where (population) density falls off drastically. Right now, we’re concentrating our fire. We’ll hit the dense areas and then spiderweb out,” he explained.

Kyle also declined to estimate how many permanent jobs it will create here, saying that figure will depend on the number of customers it draws. But permanent positions will include jobs in sales, customer service and operations.

Reaching a franchise agreement is just one of the hurdles that Shentel has to clear before it can begin building its infrastructure in a given municipality. The company also has to perform an engineering study to figure out how it will be built – a precursor for obtaining a building permit from the municipality.

Kyle acknowledged that building the infrastructure would be “disruptive, but not overly disruptive,” as he told West Lampeter supervisors.

Homes and businesses are most likely be served by following the way the structures get electricity – via utility poles or underground. The latter option would use conduit if it’s already in place and has space, or Shentel would bore or trench to the home or business, he said, then restoring it to its original condition.

“That’s something we’re going to look at closely,” said Drumm, Manheim Township’s manager. “I wouldn’t expect it to be terribly disruptive. But it could close a street for an afternoon, as they’re working and putting in lines.”

A Lancaster County nonprofit is working to remove a barrier thousands of Lancaster County families face as students shift to online instruction amid the statewide schools shutdown: internet access.

As Shentel arrives in Lancaster County, it’s not expected to bring a windfall of revenue to the municipalities it’s entering.

To provide cable TV in a municipality, a company must reach what’s called a franchise agreement with the municipality. The agreement requires the company to pay a fee equal to a fixed percentage of its cable TV revenue generated in the city, township or borough.

Local municipalities will be charging Shentel the same 5% fee that they charge Comcast, municipal officials here said. That’s the most allowed by the Federal Communications Commission.

“It’s a lateral move for us financially,” said Bill Laudien, Lancaster Township manager. “It’s not like suddenly, folks are going to be able to get television who couldn’t get television before. … If somebody leaves Comcast and goes over to Shentel, that’s revenue neutral for us.”

Cable TV fee revenue is a six-figure sum for five of the six suburban Lancaster municipalities that Shentel is approaching. Here’s how much the municipalities expect to receive from Comcast in the current year: