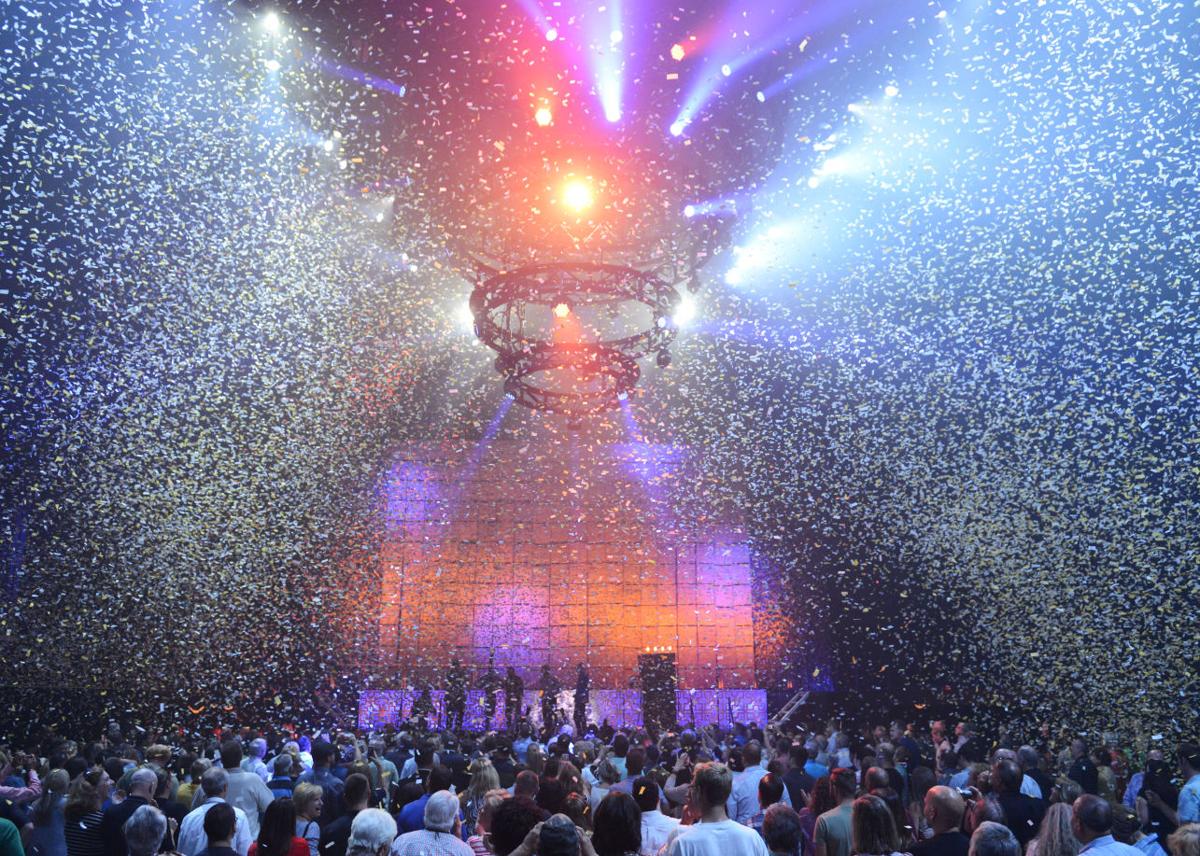 The grand opening ceremony at Rock Lititz Studio in Warwick Township in September 2014. 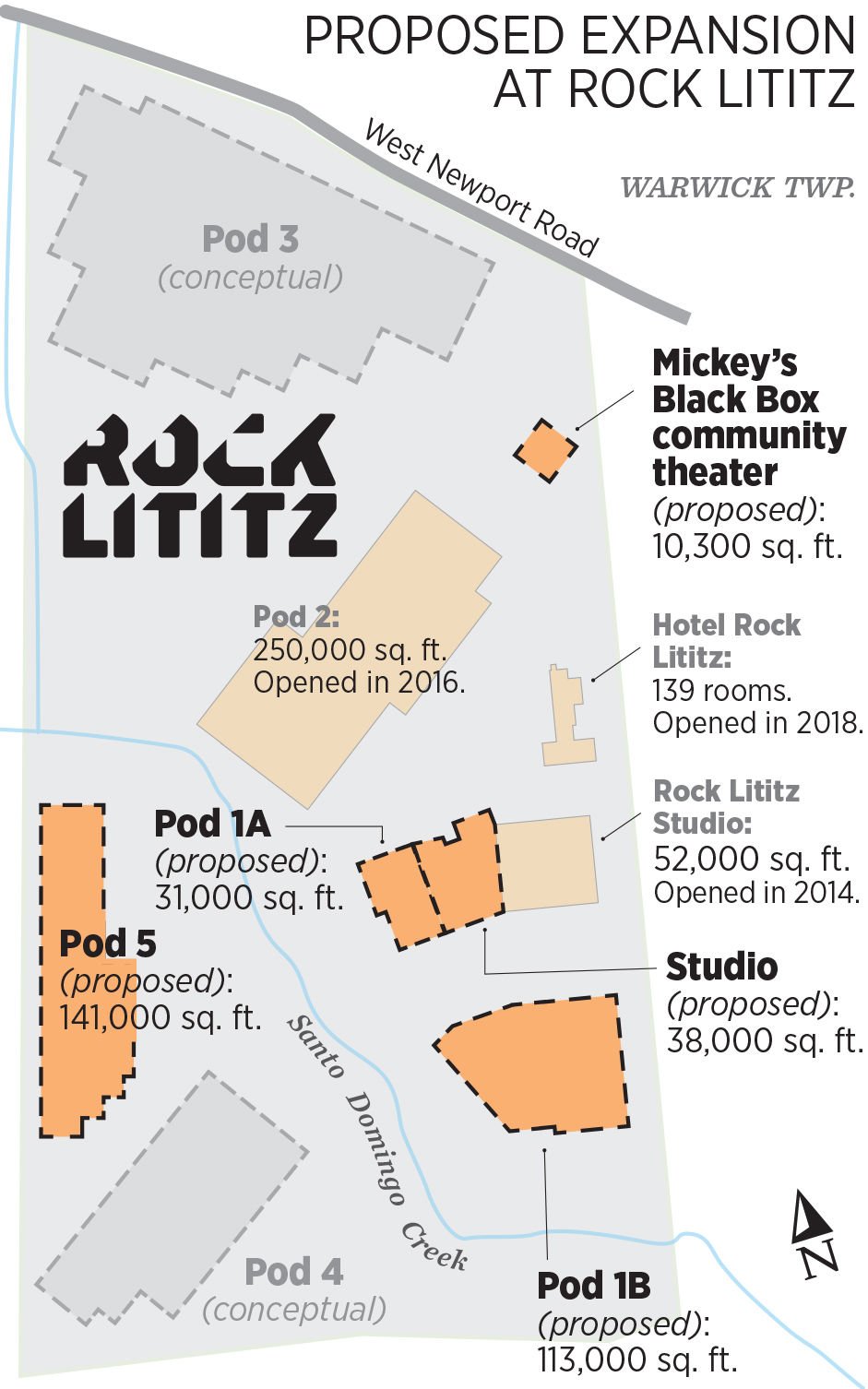 The grand opening ceremony at Rock Lititz Studio in Warwick Township in September 2014.

Seven years ago, when Rock Lititz was just a concept, its developers figured that firms making equipment and systems for putting on live events — and bands using them — would flock to a business campus dedicated to that field.

And without doubt, the visionary developers have been proven right, judging from the emphatic success of their first three buildings at the Warwick Township campus — Rock Lititz Studio, Pod 2 and Hotel Rock Lititz.

Rock Lititz’s developers still see demand for space from firms in the live-event industry and from bands that want to practice using those high-tech systems before going out on tour. So the developers are proposing five more facilities on the 96-acre campus.

— A small community-theater building to be developed by Michael Tait, founder and former CEO of Tait Towers.

A Rock Lititz spokeswoman on Monday declined to disclose the cost of this wave of development. But judging from the cost of the existing buildings, it’s sure to exceed $30 million.

The expansion could lead to 200 to 250 more jobs, according to Rock Lititz General Manager Andrea Shirk. Some 405 people now work at the campus a quarter-mile west of Route 501.

Shirk said the decision to develop more facilities stemmed from its success with the studio and Pod 2, and subsequent interest by other live-event firms in moving to Rock Lititz.

That experience “indicates to us that there is a need and an opportunity to bring more talent, creativity and technology to the Rock Lititz community,” Shirk said in a prepared statement.

“We intend to grow as a collaborative community to better serve our clients.”

Township planners are set to review land development plans for the expansion at their Sept. 25 meeting.

A Rock Lititz spokeswoman said the developers hope they can secure financing and township approval in time for construction to start in late 2019 or early 2020.

Construction would take 12 to 18 months; Rock Lititz would build the four concurrently.

The developers are seeking loans from the state to assist with the financing, although the amounts and types of loans were not immediately available from state officials.

A spokesman for Lancaster-based EDC Finance, which is helping Rock Lititz pursue the state loans, declined to disclose the project cost.

Rock Lititz, the first business campus for the live event industry in the world, has been a success for several reasons.

The 250,000-square-foot Pod 2, the first building of its kind in the world, gives live-event firms there daily opportunities to share ideas with others in the field.

That’s a key advantage offered by so-called “industry clusters” such as Rock Lititz.

And, if a live-event firm’s systems or technology are being used in rehearsals at Rock Lititz Studio, and something needs a tweak or repair, a Rock Lititz address puts the firm mere minutes away.

Rock Lititz Studio also is the first building in the world of its kind. Never before had a building been constructed specifically to house “tech” rehearsals and testing of audio, lighting, staging and other systems.

Township manager Dan Zimmerman said the expansion would increase the already “tremendous amount of economic activity” generated by Rock Lititz in the Lititz area and the county.

“It’s going in a very positive direction,” he said.

Not only does Rock Lititz employ hundreds of people, observed Zimmerman, its firms rely heavily on local fabricators and suppliers, helping them grow too.

Here’s a closer look at the proposed new buildings.

The new rehearsal studio of 38,000 square feet would adjoin Rock Lititz Studio’s 52,000 square feet. It would be designed to handle large systems used in stadium and arena shows like its older brother is.

The new studio would have similar amenities to Rock Lititz Studio. Among them would be dressing rooms, a production office and catering facilities.

The addition would be the third rehearsal space at Rock Lititz. A 5,000-square-foot space was added to Pod 2 in 2017 to serve artists who perform in clubs and smaller theaters.

Fueling the demand for such space is the seemingly endless array of products and services needed to put on a live event.

Rock Lititz said the five new facilities would be designed and built by the following team. Construction manager is Ned Pelger of Pelger Engineering & Construction. The general trades contractor is Bottom Line Contracting.

Here is how many days Pa. nursing homes need to go without new cases they can reopen

Akron Borough is considering filing a lawsuit against its former engineer for the firm’s alleged improper inspections of newly-built sidewalks.

Insurer sues for $39.5M over Specialty Bakers fire; site has since been sold

After a devastating March 2018 fire that destroyed its Lititz-area plant, Specialty Bakers initially said it planned to rebuild and rehire the…

Millersville University’s entertainment technology program, an increasingly popular option for students interested in the behind-the-scenes action of live shows, is now its own major.

The Clair audio businesses, divided into two companies 12 years ago, are being reunited in ownership and location.

Rock Lititz's proposed expansion gets another $4.25M in state loans

Rock Lititz continues to have a friend in Pennsylvania — a very supportive friend.

You make the art at "Microworld" the exhibit at Millersville University's Eckert Gallery.