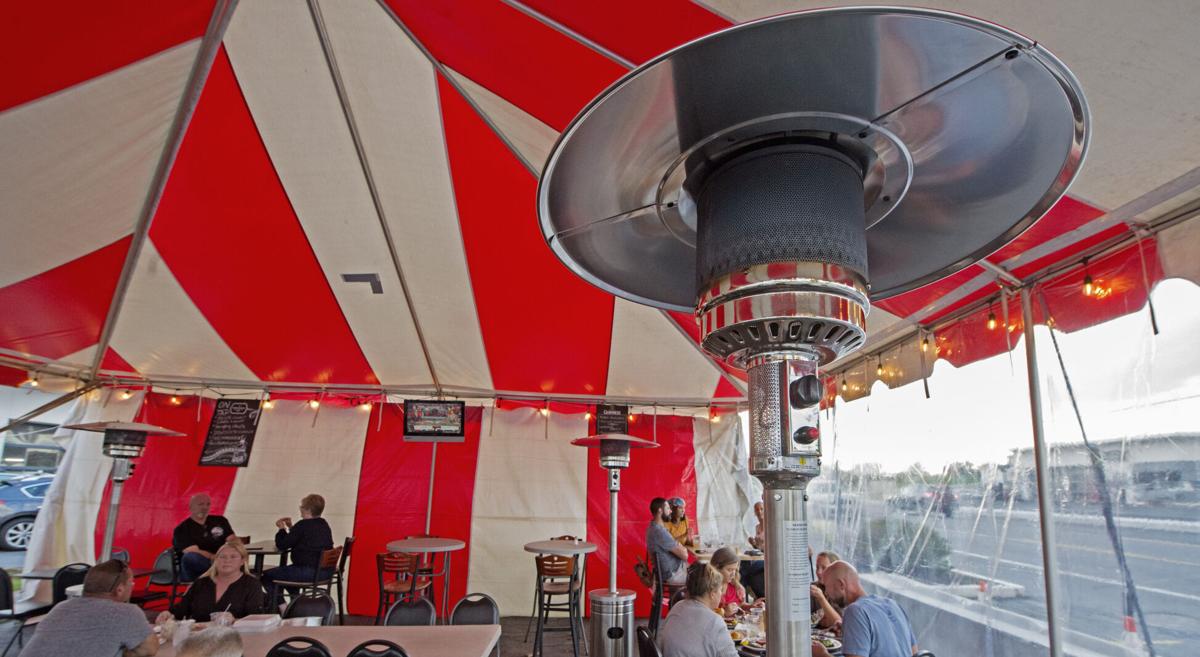 Heaters are set up inside a tent in the parking lot of Lucky Dog Cafe 1942 Columbia Ave. in Manor Township Wednesday, Oct. 7, 2020. The heaters are set up to keeps patrons warm as the tempeture drops although they were not needed at the time of this photo. 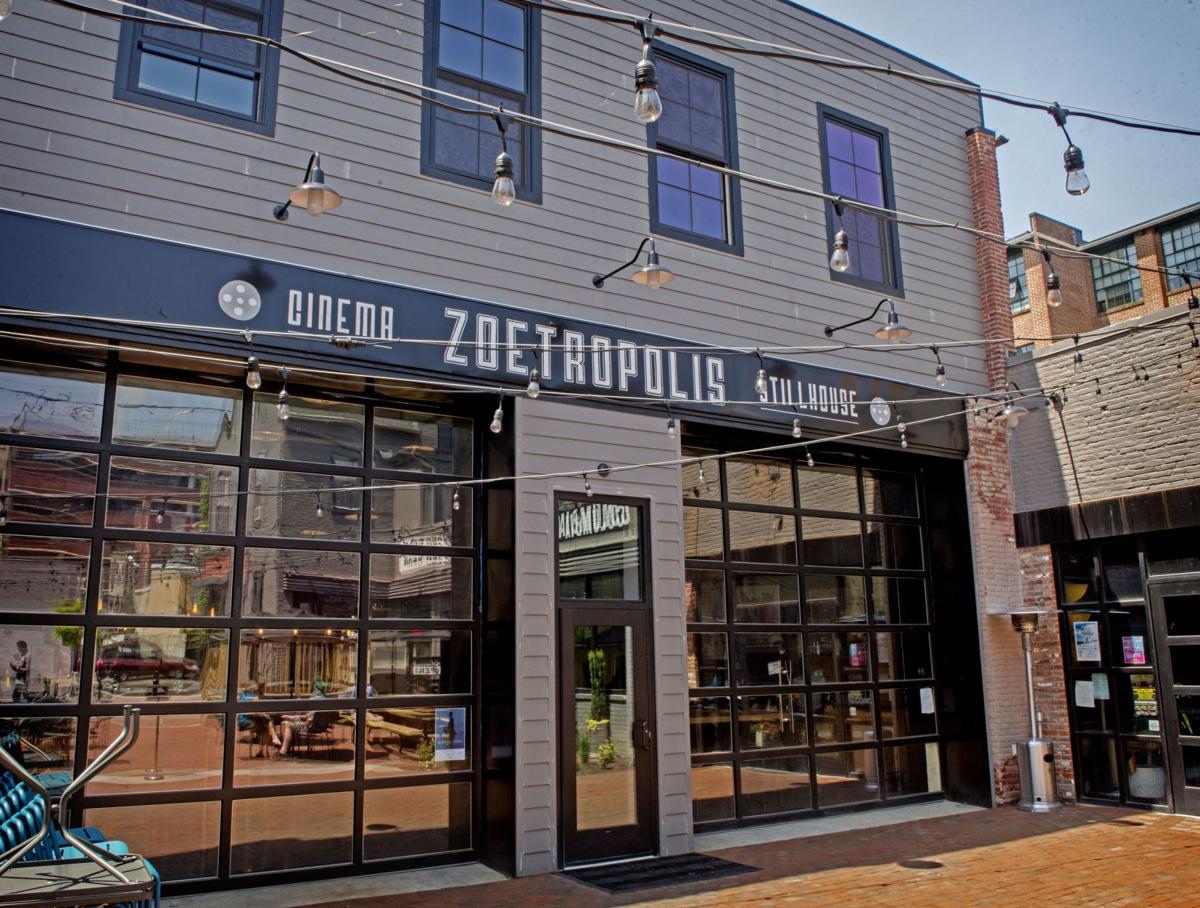 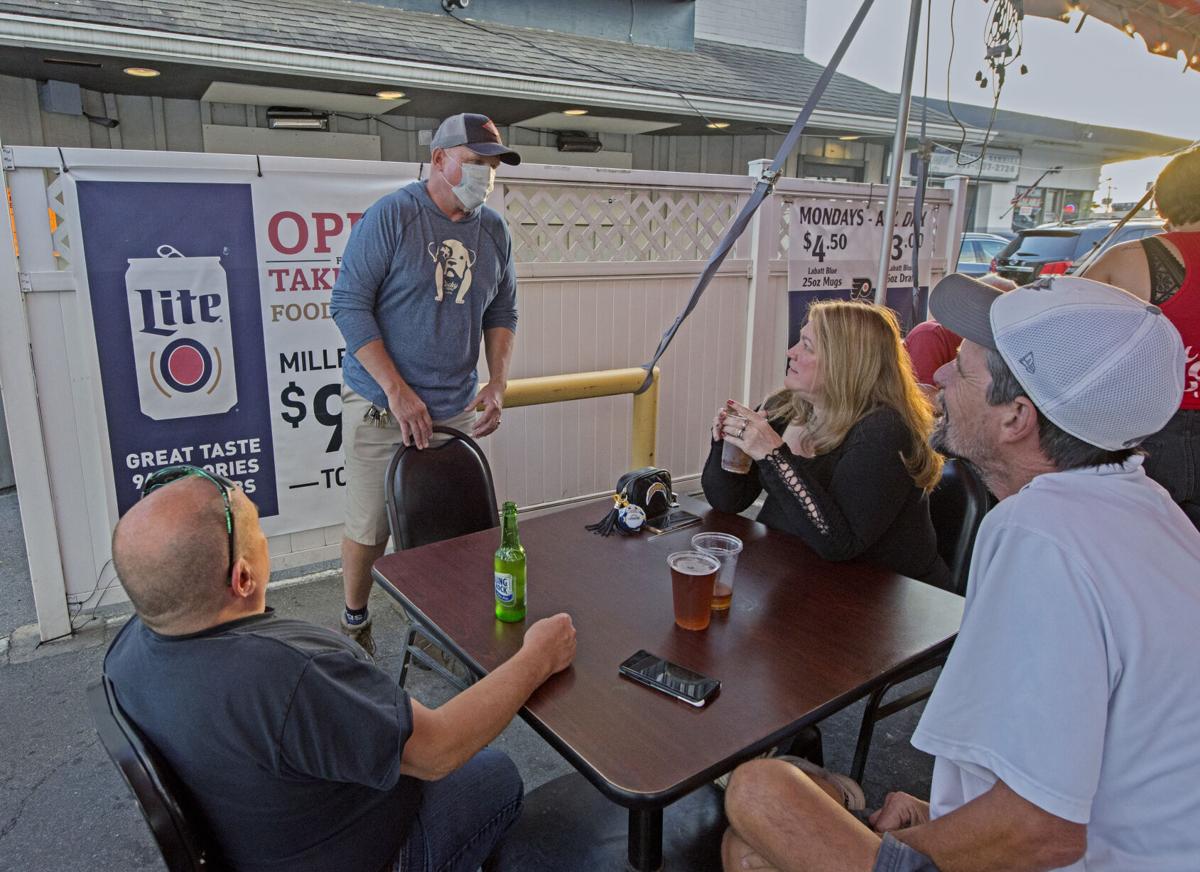 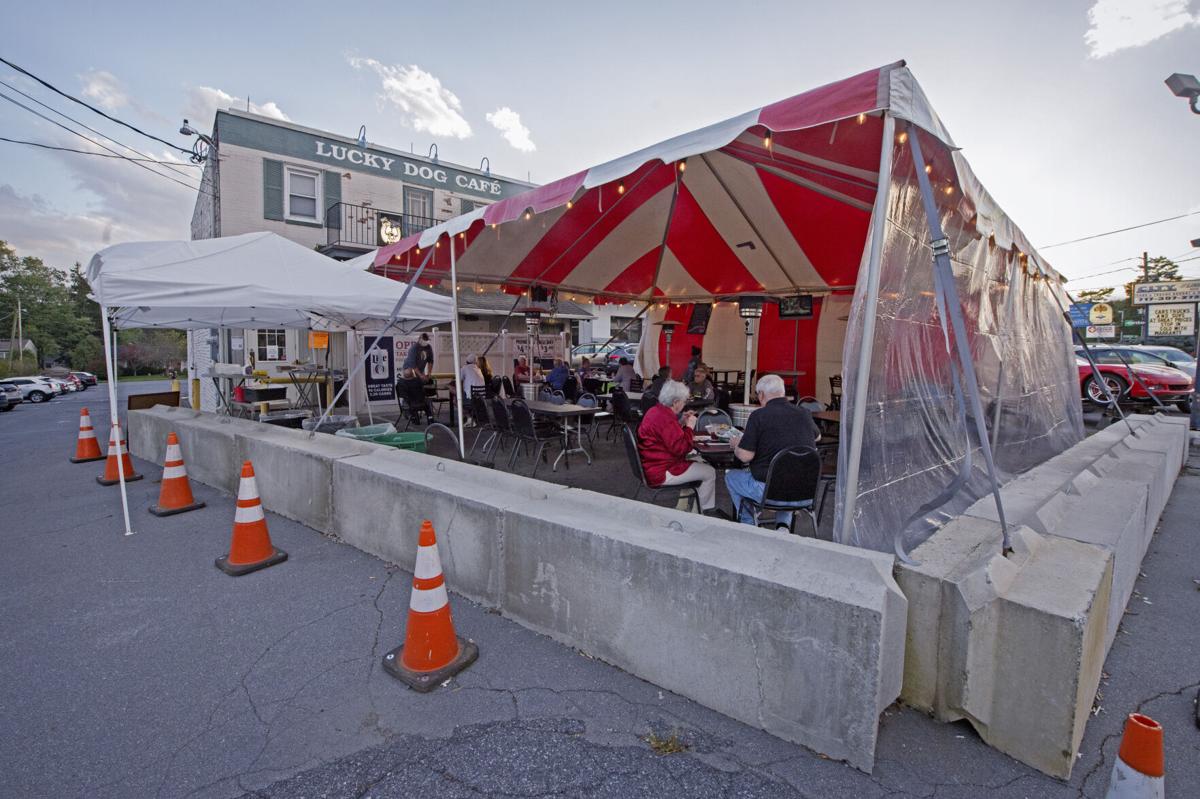 Patrons eat inside a tent that has been set up in the parking lot of Lucky Dog Cafe, 1942 Columbia Ave., in Manor Township on Wednesday, Oct. 7, 2020. 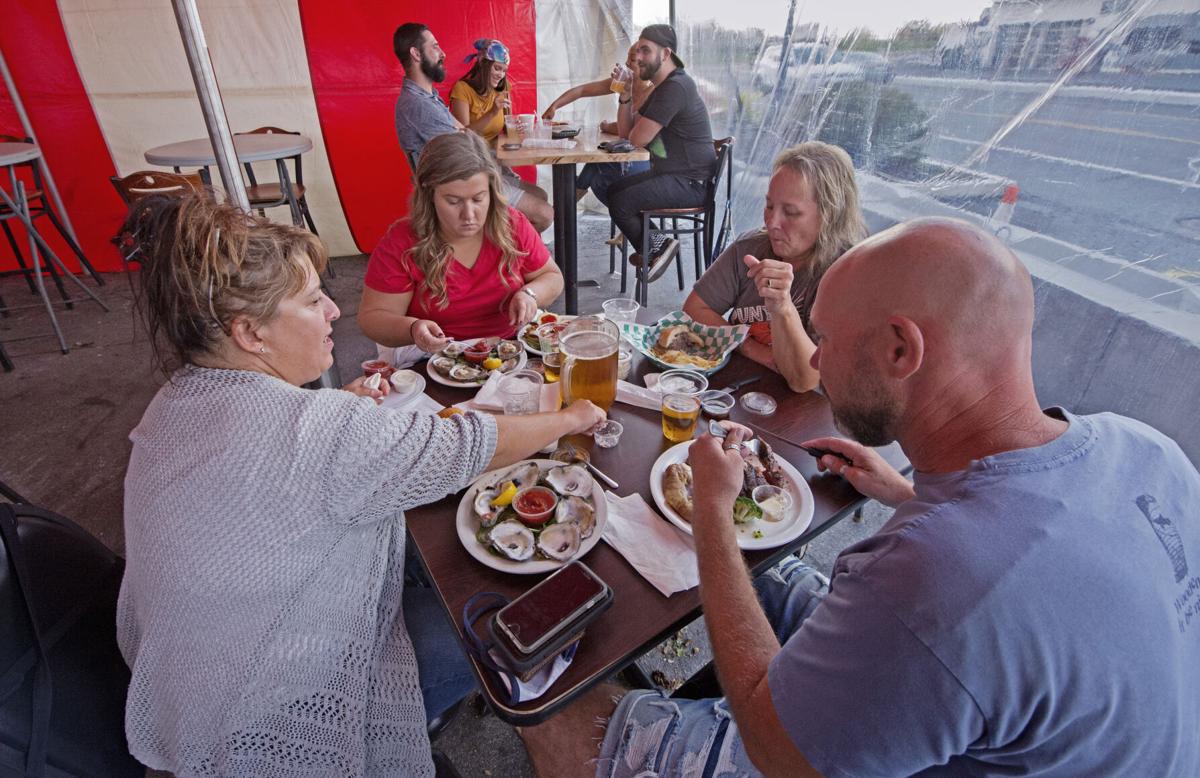 Heaters are set up inside a tent in the parking lot of Lucky Dog Cafe 1942 Columbia Ave. in Manor Township Wednesday, Oct. 7, 2020. The heaters are set up to keeps patrons warm as the tempeture drops although they were not needed at the time of this photo.

But there was only one in stock.

He grabbed his cell phone and quickly started searching for heaters in stock nearby.

A September temperature dip put Robb, owner of a neighborhood bar and grill - Lucky Dog Cafe, 1942 Columbia Ave. - on alert. He needed to do something to keep outdoor dining, which in the pandemic had become a lifeline for his business, going as long as possible.

Robb saw online that a Lowe’s in Harrisburg had seven heaters in stock. But, about 40 minutes later when he arrived, only two were left. Three heaters dwindled to one by the time he got to the Lowe’s in Palmyra, Lebanon County. And then he started back to Lancaster hoping that the one heater he saw earlier, but did not buy, was still there.

“It was such a scramble for them,” Robb said.

Robb is among many restaurant owners rushing to keep outdoor dining comfortable as temperatures cool because outdoor diners have become vital as pandemic-related indoor capacity restrictions continue. Nearly 75 percent of full-service restaurants currently have outdoor dining, according to a recent National Restaurant Association survey, and outdoor diners now account for an average of 44 percent of daily sales.

As winter closes in on closing down outdoor dining options, bleak predictions have surfaced, ones that are shared by Mick Owens, owner of three Mick’s All American Pubs and Maize Mexican Cantina in Lancaster County.

With prospects for the return of enhanced unemployment benefits and small business stimulus programs uncertain at best, the coming loss of outdoor dining means restaurants this winter will face a landscape that is even more difficult than what existed this spring, he said.

“This is going to be devastating,” Owens predicted.

Exactly how devastating remains to be seen, but already about 100,000 U.S. restaurants – or 1 in 6 – have been lost since the start of the pandemic, according to the National Restaurant Association.

In Pennsylvania, as many as 30% of restaurants may close, according to the Pennsylvania Restaurant & Lodging Association, which based its prediction on a survey by Yelp, a website that publishes reviews of businesses.

For now, however, the rush is on to adapt outdoor dining so it can go as deep as possible into the fall and winter, according to Ben Fileccia. He serves as eastern Pennsylvania Director of Operations & Strategy with the state Restaurant & Lodging Association.

He has been seeing more restaurant owners than normal go out to buy appliances, such as wind barriers, fire pits and tents for the winter months this year, which is rare.

However, owners of all types of restaurants are stocking up on appliances to prepare for the cold weather and hoping it extends its outdoor dining season, Fileccia said.

“I talked to one owner and he said ‘Unless it drops below 20 degrees outside, 15 degrees outside’ he’s going to be using his heaters,” Fileccia said.

Whether customers feel comfortable and prefer dining inside or outside is something that will also have an impact on outdoor dining, Fileccia said.

“So, just because it’s a colder temperature you still want to be able to provide outdoor seating for these guests and we hope that by restaurants buying these heaters that that would help,” Fileccia said.

Restaurants statewide that complete a self-certification process have a 50 percent indoor seating capacity and can have up to 25 people, including staff, for indoor events, Fileccia said.

Although those numbers are larger than early in the pandemic, he pointed out that the restrictions are expected to play a major role in restaurant failures.

Fileccia said it will be hard for restaurants to thrive under the restrictions but the industry can survive by adjusting its business plan.

Leigh Lindsay is among those looking to adjust plans as she investigates various outdoor heating appliances for her restaurant.

Lindsay, one of the owners of Zoetropolis,112 N Water St., a downtown movie theater, restaurant and distillery, said she has looked into purchasing heaters, small fire pits and tents. She recently searched for heaters at Lowe’s to purchase.

She wants as many appliances as possible to be available and to keep everyone at her restaurant safe as the weather changes.

“Because I do feel like there’s a chance that this winter might get a little hairy, but who knows,” Lindsay said.

Lindsay has her fingers crossed that the weather holds until January.

Until then, guests at Zoetropolis can either dine outside in the restaurant’s courtyard or inside with the site’s garage doors open, which allow air to flow in.

How quickly the weather shifts will most likely determine how long Zoetropolis and other local restaurants can continue to serve customers outdoors.

“I mean, depending on how crazy it gets, as long as people dress accordingly I kind of feel like they’re still going to be happy to get outside if they feel safe,” Lindsay said.

The annual Albatwitch Festival is this weekend; here's the story behind the local legend

Returning to the West Lancaster Lowe’s, Robb peeked down the aisle where he remembered seeing the heating unit earlier in the day.

At first glance, his hopes sunk.

“So, as I’m walking down the aisle, I can’t see it, I’m like ‘Oh man!’ But once I got there, I did see that it was still there,” Robb said, explaining that at that point he felt “very much a sense of relief.

“Well, there were certainly things that I had planned for the afternoon other than driving from Lancaster to Harrisburg to Palmyra and back again but necessity takes over,” Robb said.

In total, Robb drove about 100 miles round-trip to purchase four heaters, which each cost about $160, and had them set up for dinner service that same night.

Robb’s restaurant, Lucky Dog Cafe, opened in 2001, and had not offered outdoor dining before the pandemic. Now it makes up 80 percent of his dining business, Robb said.

Once Lancaster entered the yellow phase and restaurants were allowed to reopen with outdoor seating, Robb and his staff created an outdoor dining space in the cafe's parking lot.

Four parking spots were used for the dining space, where a tent was set up, and concrete barriers were placed around the area. Robb repurposed old restaurant furniture from his barn to outfit the new space.

“So, I feel like I was fortunate that I didn’t have to lay out a lot of money in order to create that outside area,” Robb said.

Robb and his staff set up the heating units he purchased in each corner of the outdoor area. The units have mostly been turned on at night for guests at Lucky Dog Cafe.

Robb said he hopes the heaters will provide enough warmth for customers.

“Hopefully if they’re all on in the evenings, that’s enough to put a blanket of warm air down,” Robb said.

For now, customers are excited about being able dine outside at Lucky Dog Cafe, Robb said.

“They were very grateful just to have some place to go and something to break up the monotony,” Robb said.

Mike Sangrey has been putting in some quality time recently helping his dad pour sidewalks, prep patios and install curbing for Sangrey Concrete.

Pennsylvania plans to offer $20 million in relief to the state’s beleaguered hospitality industry, the governor announced Thursday, an amount …

Still raging in its eighth month, the coronavirus has taken a drastic toll on the world of food and drink. In Pennsylvania alone, more than 70…

Hurricane Zeta remnants to bring rain to Lancaster County today; here's how much

The gloomy, rainy weather outside today is thanks to the remnants of Hurricane Zeta, which less than 12 hours ago battered the coast of Louisiana.