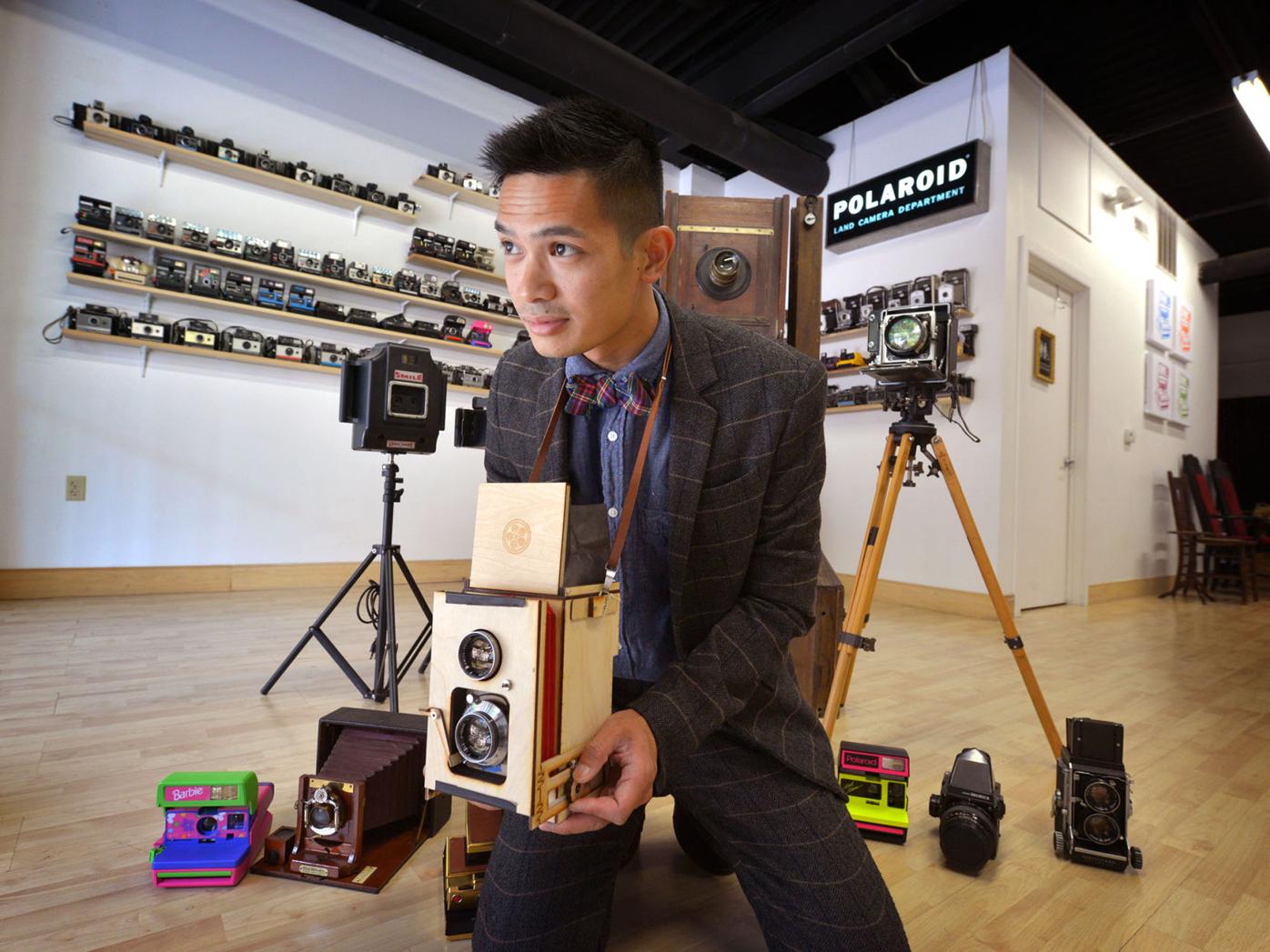 Ole Hongvanthong of Photole poses with the vintage camera equipment he collects in his studio/camera gallery at 108 W. King Street. 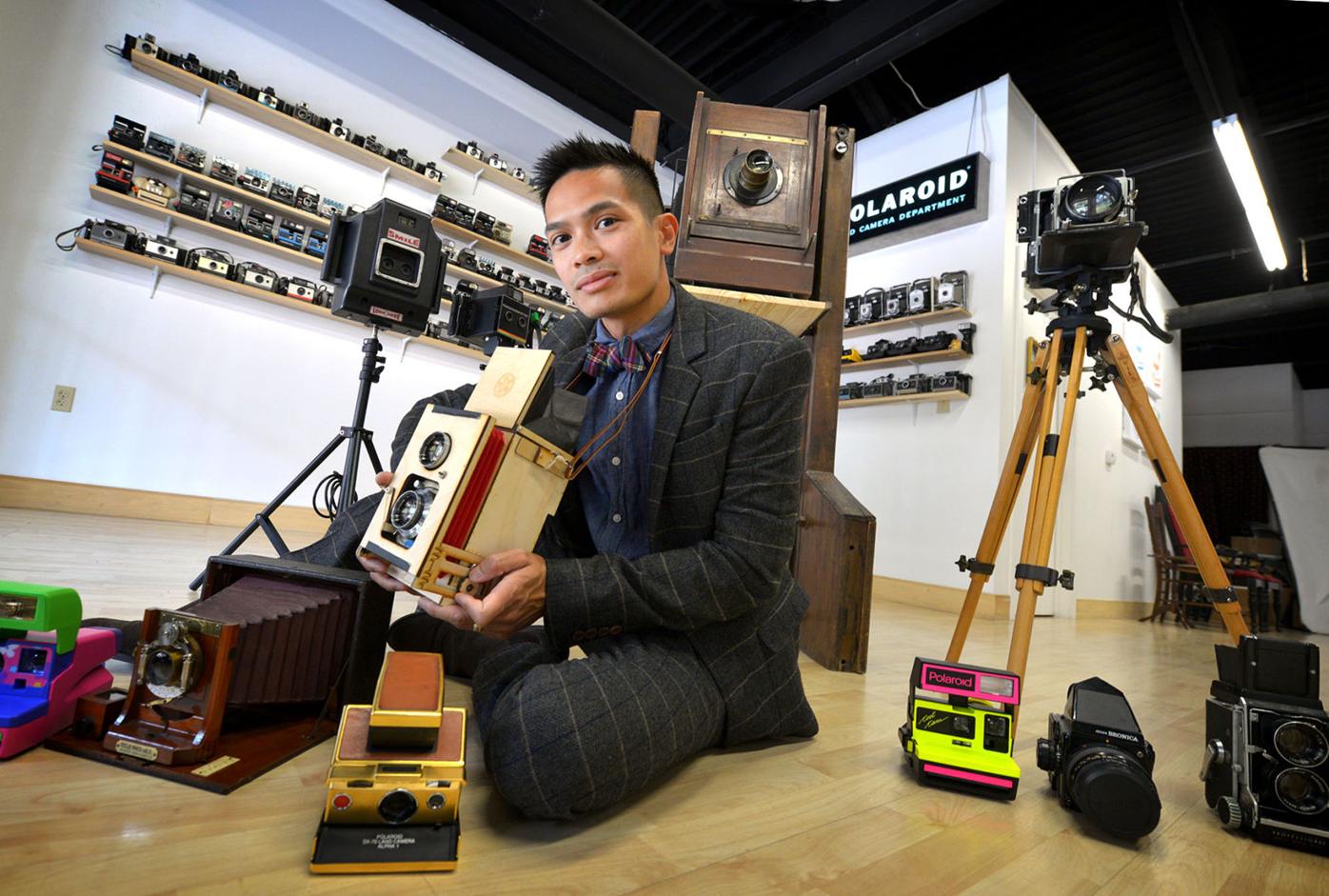 Ole Hongvanthong of Photole poses with the vintage camera equipment he collects in his studio/camera gallery at 108 W. King Street.

Seven years after going out on his own, Ole Hongvanthong has developed a unique business as a photographer.

Inspired by a photography class at Conestoga Valley High School, Hongvanthong worked as a school photographer for Lifetouch, then returned to Lancaster in 2008 to start working for himself.

Since June 2014, he has operated PhotOlé Photography out of a downtown Lancaster studio at 108 W. King St. that includes his collection of more than 220 vintage Polaroid cameras.

Hongvanthong, 33, who owns the business with his wife, Heidi Castillo, has incorporated the Polaroid cameras into his work as a wedding and event photographer, offering guests an immediate keepsake.

Along with an active presence on social media, the vintage cameras, which he also offers for sale, are one of the ways Hongvanthong has tried to make his business stand out.

The shop was recently featured in a New York Times article which highlighted the “farm-to-table” attitude of five city businesses.

How did you first get started?

I started my career in photography as a junior at Conestoga Valley High School. My photograph got me to go to a state competition. I didn’t win anything, but I realized at that point that you could go somewhere with a photography career.

What was your first job as a photographer?

I moved around a lot with Lifetouch. I moved to Arkansas and then moved back to Harrisburg and my last job was as a photo manager in the D.C. office.

Why did you leave?

I was already doing a lot of side work as a photo manager and I had an opportunity to do something for myself. So I decided to start my own business and moved back to Lancaster in 2008 and started PhotOlé Photography.

How did you get started?

I researched my competition and instead of getting discouraged from the overwhelming pool size of photographers operating in Lancaster, it drove me to want to be different.

I grew up in Brownstown and early on I worked out of my grandma’s home. For the first two months, I was doing the cold calls from our balcony in Brownstown, just sitting outside calling numbers — and it just didn’t work, nobody wanted to hire a photographer in the Brownstown/Ephrata area.

So what did you do?

My close friend at the time had an apartment on Queen Street, across the street from Flowers by Paulette. I asked, “Do you mind if I moved in to your place so I can tell people I’m in downtown Lancaster?” So I was kind of renting out a room in his apartment and called that my studio. It worked.

When I would talk to brides, I would tell them that I’m right across the street from Flowers by Paulette. That’s when I realized that I needed to be in Lancaster.

How did you try to be different?

To distinguish myself, I incorporated a lot of film photography so when the client got back my work, it was more artistic than a guy walking around with a digital camera snapping 2,000 photos.

I realized I wanted something more tangible and that’s when Polaroid became my niche. I was able to take a photograph and give that client a picture immediately.

Why did you start selling Polaroid cameras?

I went back to the first camera I bought that didn’t work and realized I could modify the back of it to take current Polaroid paper.

How do you use social media in your business?

You have to make sure whatever social media platform you’re using, you should be focused on knowing where your clientele is.

For us, our customer is on Instagram because we’re a photography-based company. We focus on sharing the images we take with the cameras to get people really interested in learning how to take those types of photos.

Why did you open on King Street?

I grew up in the U.S., but I was born in Laos. Last year, I went to visit my home country for the first time since I lived there. While I was there, my dad wanted us to get a family portrait taken. The photographer we chose to do our family portrait was somebody that looked fairly established.

I realized when I came back that this gentleman who really had nothing was able to start a studio and only I have a home studio and all the stuff in there doesn’t represent my business.

I realized I needed a studio to showcase my skills and talent and background.

How did The New York Times find you?

They found me on Instagram. It was almost like a secret shopper experience. (The reporter) researched me and came to my studio to see me in person on April 11. The Times sent a photographer on June 6.

How big a deal is that kind of exposure?

Honestly, I think it is a big deal. This is a way for us to get the credibility for what we’ve been doing and working on. It has really given us the limelight on what Lancaster is about.

What were your worries about starting your business?

In D.C. I became a photography manager so I was in charge of 30-plus photographers, so that really taught me how to run a studio.

So when I started my own business, I didn’t really have any fears other than how to let people know I exist.

To get the exposure that I needed, social media was available and it was accessible, and it was free.