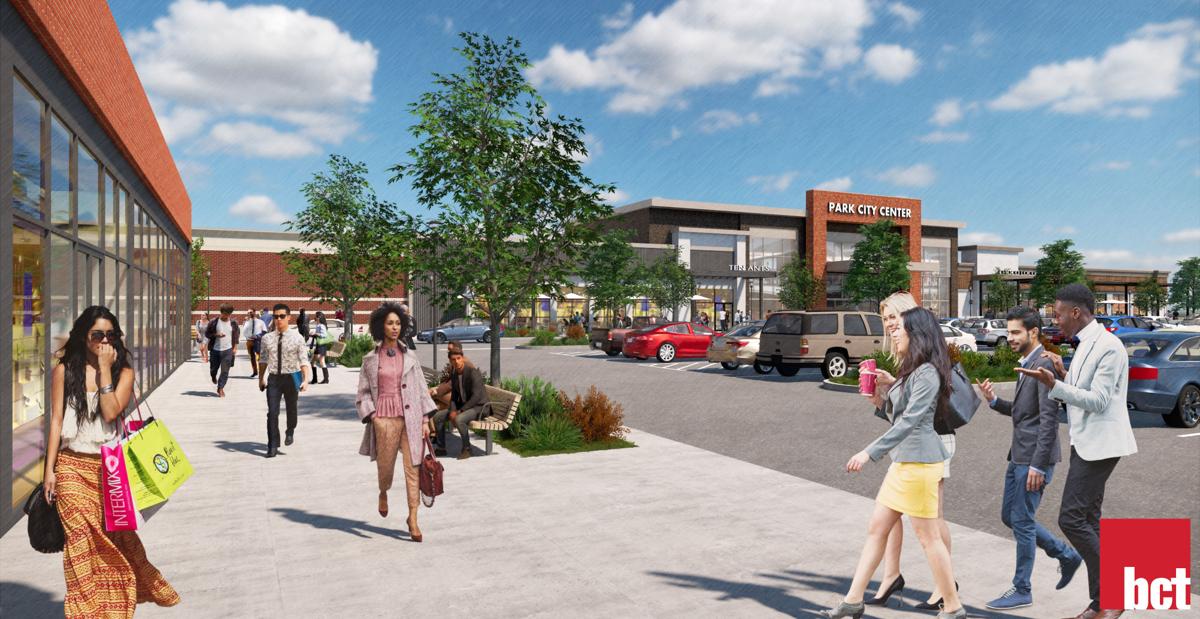 This rendering shows one of two restaurants (at far left) and a new main entrance (rear) to the main mall building being proposed by Park City's owner. This would fill the area now occupied by the empty Bon-Ton store. 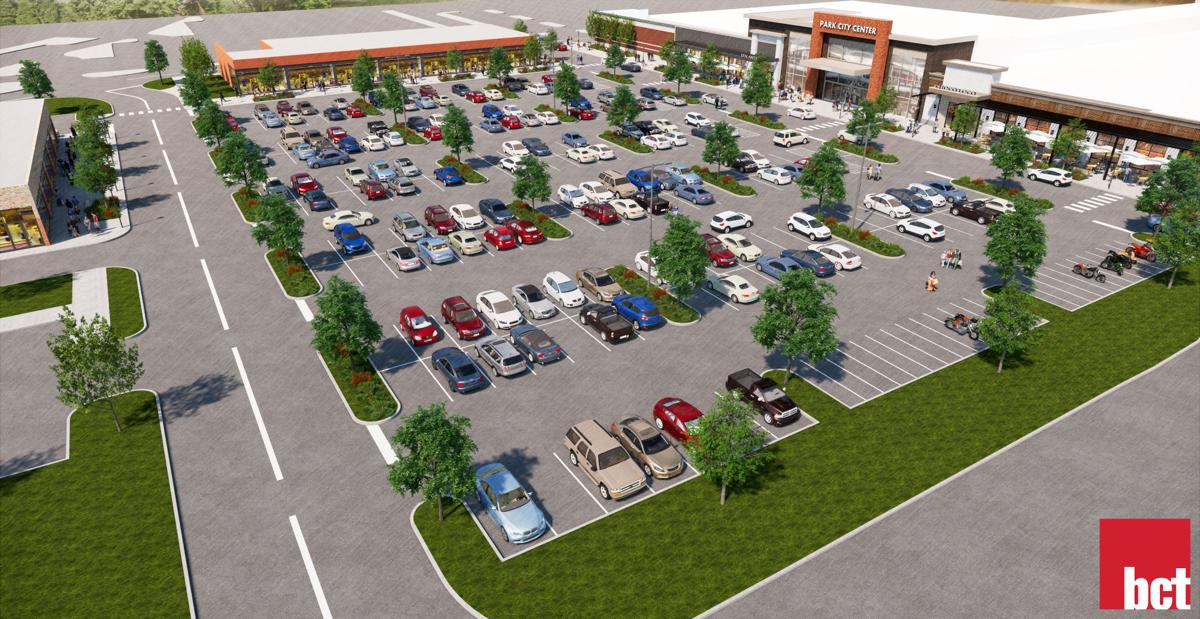 This rendering shows an aerial of the redevelopment of the empty Bon-Ton store's footprint at Park City. 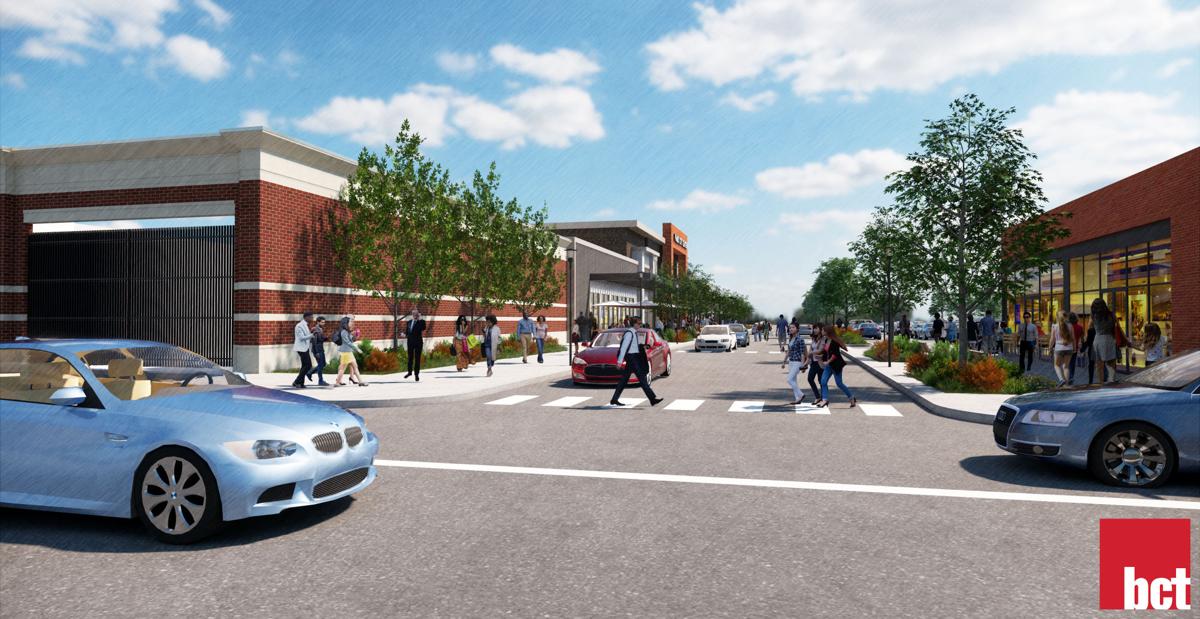 This rendering shows the proposed redevelopment of the land at Park City now occupied by the vacant Bon-Ton store.

This rendering shows one of two restaurants (at far left) and a new main entrance (rear) to the main mall building being proposed by Park City's owner. This would fill the area now occupied by the empty Bon-Ton store.

This rendering shows an aerial of the redevelopment of the empty Bon-Ton store's footprint at Park City.

This rendering shows the proposed redevelopment of the land at Park City now occupied by the vacant Bon-Ton store.

When Park City’s owner disclosed in August that it wanted to demolish the vacant Bon-Ton store, it declined to say what might be constructed in its place.

Now it has: two free-standing restaurants — one where the department store now stands, another in a spot that’s now parking — plus a new front entrance to the main mall building.

The intentions of mall owner Brookfield Properties surfaced as part of its request to the city Planning Commission to fast-forward the redevelopment’s approval process.

The commission is scheduled to weigh the request at its meeting Wednesday at 6 p.m. in the City Hall annex.

Park City spokeswoman Rachel Gallagher, its senior general manager, declined to address the particulars of the plan on Friday, saying only that the redevelopment “will re-imagine the former department store space.”

The sketch plan shows a free-standing restaurant of 11,250 square feet and another of 9,750 square feet. It does not indicate the name of the restaurants, their type or their seating capacity.

Inside the main mall building, a large courtyard at the mall entrance to The Bon-Ton space would be filled with two tenants facing a newly created parking area.

The sketch plan does not specify the size of the two new spaces or indicate what type of tenants might fill them.

Nor does the submission show a total project cost.

The request to the city planners stems from Brookfield’s desire to complete the new entrance to the main mall building before Christmas shopping season in 2020.

In the city, typically demolitions can occur only after an approved plan is in place for the next use of the site.

Brookfield wants to skip the first step in the plan approval process (a preliminary approval) and go straight to final approval. It also wants permission to start demolition before final approval of the redevelopment plan is secured.

The sketch plan shows that the redevelopment would lead to a rise in the number of parking spaces in that area of Park City from 285 to 316 spaces. Landscaping would include the planting of 44 trees, four more than required.

City planning staff, in comments sent to Brookfield, described the sketch plan as a “fairly predictable” redevelopment. Staff wondered if Brookfield considered “other more mixed use and denser designs.”

Brookfield replied that it “prides itself on pursuing ... (the) highest and best use for each asset...”

Brookfield’s demolition contractor applied for a demolition permit a year after The Bon-Ton closed. The cost to raze the 179,000-square-foot building, according to the permit, would be $400,000.

The application revealed that Park City has a different strategy for The Bon-Ton space than it has for the other vacant anchor building, the former Sears.

As was announced earlier in the summer, the empty Sears building will stand, with half to be occupied by Round1, a family-friendly entertainment venue with bowling, arcade games, ping pong and a kids’ zone.

Round1 is expected to open in fall 2020, taking the entire main floor, according to Park City and mall owner Brookfield Properties.

In a place with as much history as Lancaster County, old buildings are bound to be repurpose…

On Thursday, it will be a year to the day that The Bon-Ton store at Park City Center closed,…

Pre-enrollment specials for the first 500 members will start Sept. 16 and the gym is expected to open in November, according to the company, which says it will have about 30 employees.

The Kmart store in Elizabethtown closed Sunday, about two weeks earlier than the timetable the company had given previously.