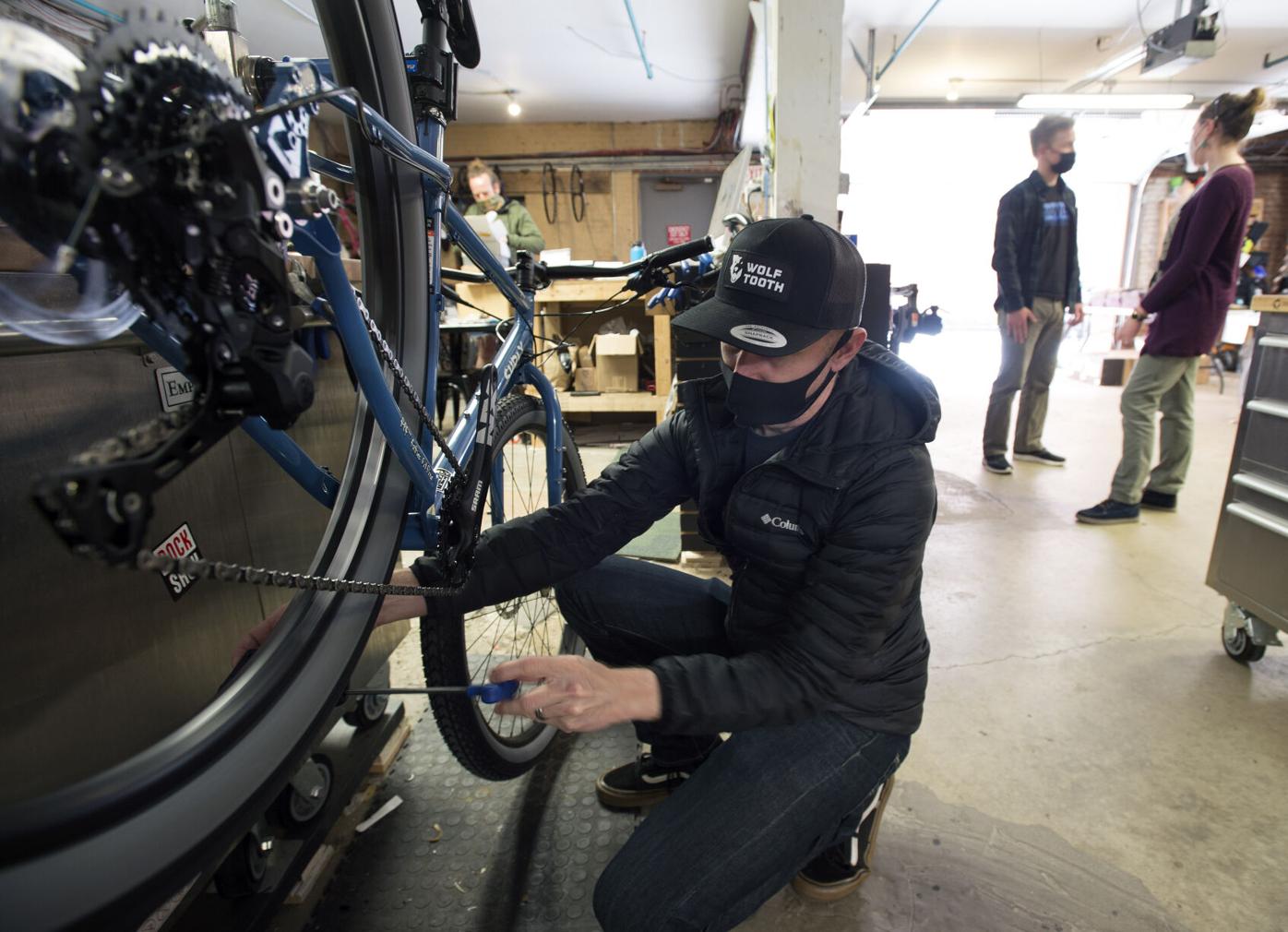 Co-owner Ted Houser, puts new pedals on a bike he is selling to Kelsey and Paul Wallace of Reamstown, at Hush Money Bikes in Lancaster Wednesday May 12, 2021. 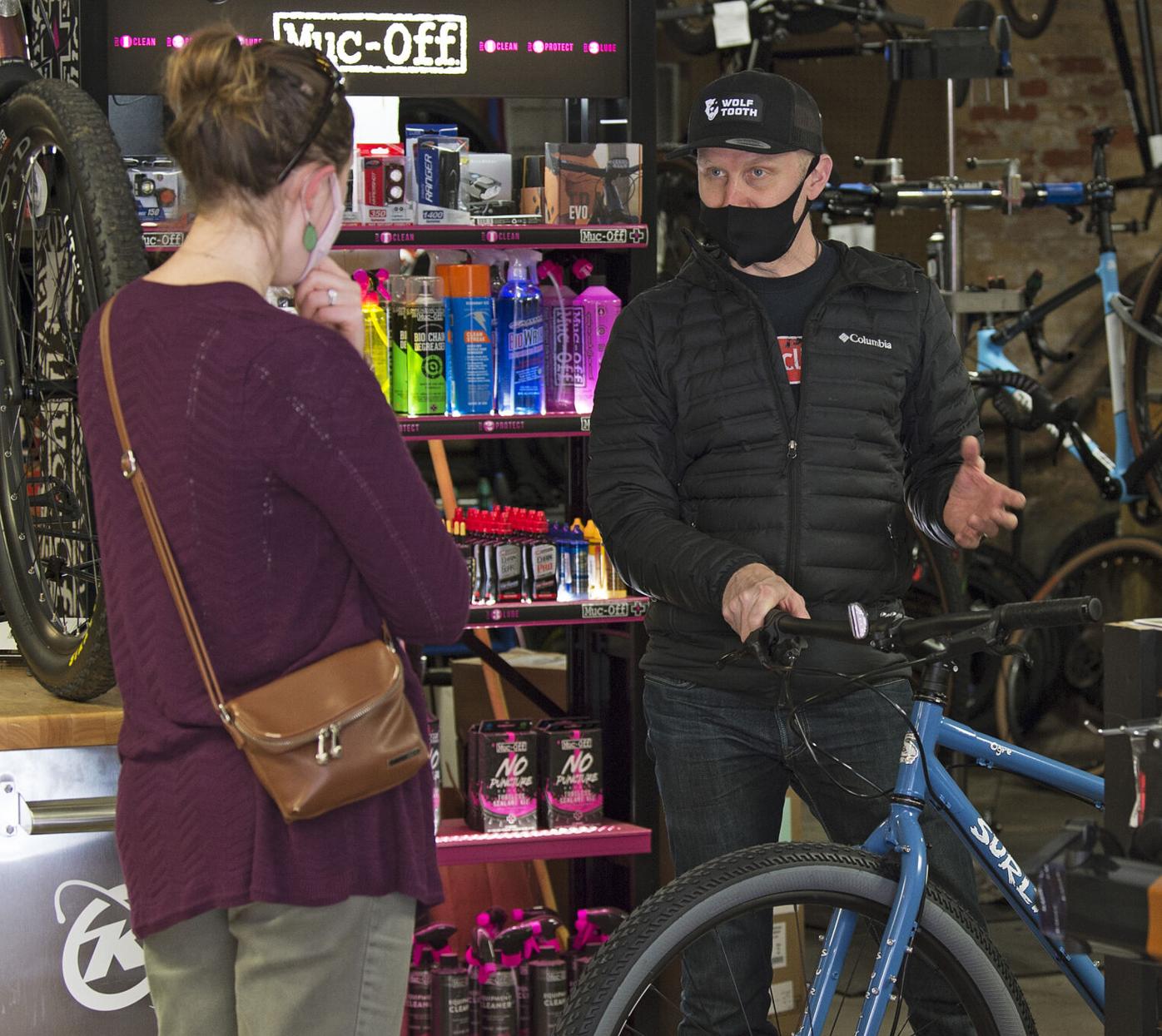 Co-owner Ted Houser, sells a bike to Kelsey Wallace, of Reamstown, at Hush Money Bikes in Lancaster Wednesday May 12, 2021. 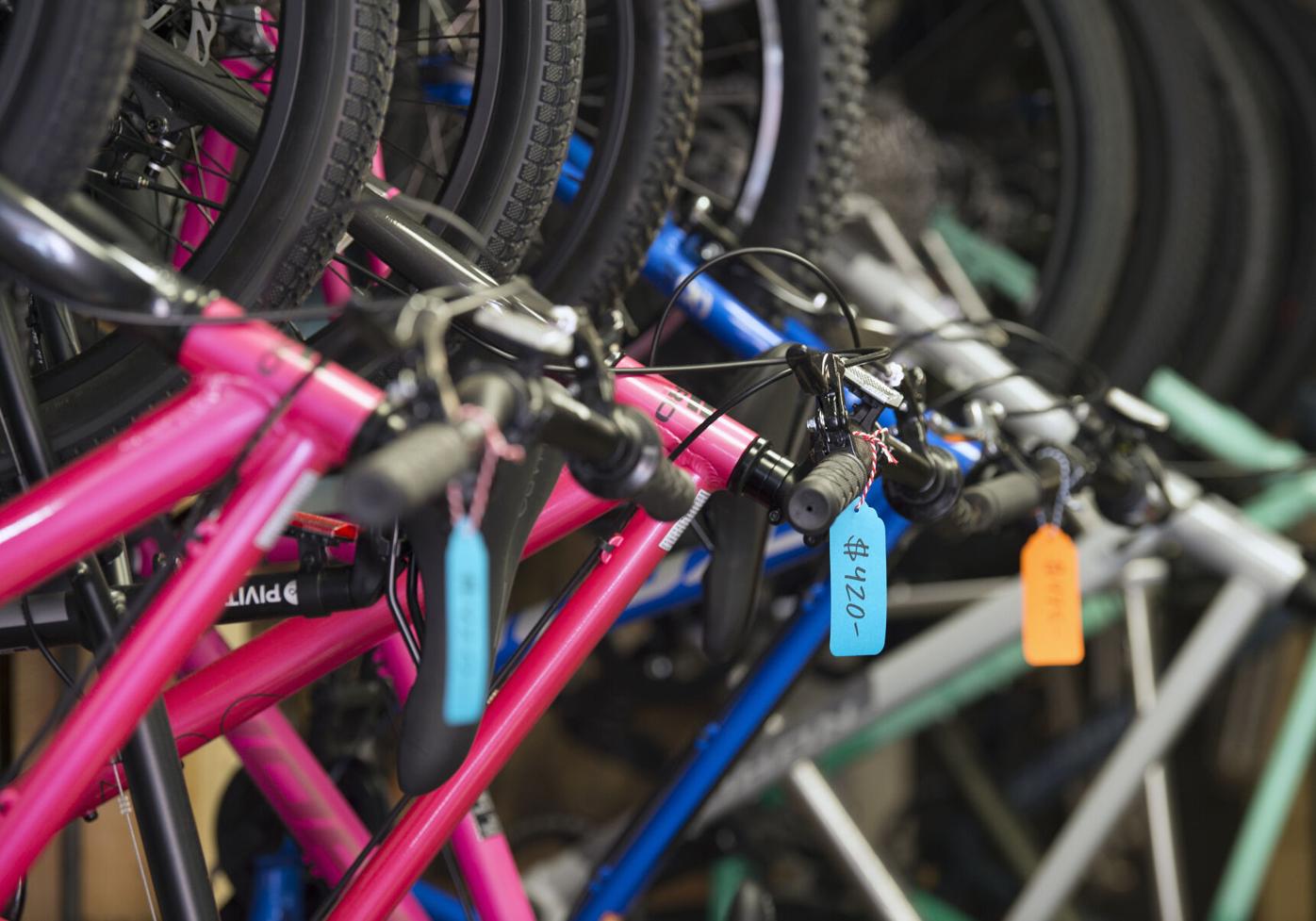 Bikes in stock at Hush Money Bikes in Lancaster Wednesday May 12, 2021.

After months of not going out during the pandemic, Eric and Lori Orihuel decided to do something they hadn’t done in more two decades: go mountain biking.

So, the Lancaster couple rented mountain bikes last November and rode on some trails around Raystown Lake in Huntingdon County. Not long after, Eric Orihuel borrowed a friend’s new mountain bike and realized how much he wanted to get back into the sport.

“Mountain bikes have changed tremendously … with bigger wheels, and bigger tires, different geometry, you can go faster and go over bigger things,” he said. “This is so much fun, I’m going to get myself one.”

Orihuel, a 55-year-old project manager with Armstrong World Industries, decided he wanted to get the exact bike his friend had, but discovered after a round of calls to multiple bike shops that there weren’t any available to buy, and it would take six months for one to come in.

“I was so disappointed because I wanted to mountain bike right then and there,” he said.

Last year, customers like the Orihuels sent sales of bicycles skyrocketing as manufacturers struggled to keep up with the demand for an outdoor activity that seemed like the perfect pandemic pastime. As the arrival of warmer weather this year has more people thinking about bicycling, customers are discovering that the surge in demand has not retreated, with long delays for new bikes the norm and parts for repairs not always available.

Manufacturers have sharply increased production but have yet to catch up to pandemic-inspired boom that some see as a “new normal,” in part because of the growing number of city bike lanes, rail trails and other new places to ride.

Orihuel says he eventually got lucky last December when Hush Money Bikes in Lancaster had a similar bike to the one he wanted in stock, and he made the quick decision to buy it for $3,000. But his wife was not so lucky, and she hasn’t been able to join him on rides on his rides since the $1,700 bike he ordered for her in December was only due to arrive last week.

“I knew that if I didn’t take that one, I’d still be waiting, like I am now for my wife’s bike,” he said.

The shortage of bicycles and parts started more than a year ago in China and other parts of Asia, where most bikes and parts are manufactured. Toward the end of January 2020, factories paused for Lunar New Year and then subsequently experienced shutdowns and other delays due to the pandemic.

Normally, enough of a particular year’s new bike models are manufactured so that a supply remains available into the fall. But last year most 2020 bikes were sold out by early summer, prompting orders for 2021 models that were spoken for well before they even hit showrooms, said Ted Houser, an owner of Hush Money Bikes.

“Dealers basically gobbled up all the 2021 inventory in real time, and the industry has been struggling to catch up ever since,” Houser said. “All 2021 production bikes have basically been sold before they get to dealerships, through wait lists and backlogs.”

The bike industry has responded by increasing production to try to meet the elevated demand. In February the U.S. imported 1.38 million bikes, 74% more than in February 2020 when production was slowed. But catching up with the backlog while meeting new  demand will take a little longer.

“We’re anticipating this to go on until 2023, really, where we see this deficit,” said Heather Mason, president of the National Bicycle Dealers Association. “It’s a combination of this spectacular delay in parts being produced, and this huge demand we can’t fill at this point.”

Most local bike showrooms still have new bikes displayed, but customers can no longer test ride a display bike, then order one in a different color or different size and have it arrive within a week or two, which had been the pre-pandemic standard bike-buying process.

At Shirk’s Bike Shop near Goodville, James Shirk said he doesn’t expect some bike orders to be filled for a year and a half.

“Last summer I think there was more of a supply sitting in people’s warehouses, but now it seems like everything’s cleaned out,” Shirk said. “The thing is, it’s not like we’re losing business to somebody else, because nobody has it. Everybody is in the same boat.”

At Horning Bike Shop near Ephrata, entry-level bikes around $600 are “kind of non-existent,” said Denny Hurst, an employee who said such bikes had previously been quick sellers.

“Keeping stuff in stock is definitely a challenge. Last fall we were quite low, and now were getting fairly low again. We still have some, but our selection in any one category is pretty limited,” he said.

Absent having bikes to sell, shops are staying busy repairing old bikes, although the supply of parts needed to make those repairs is dwindling, in the same way bikes themselves are becoming scarce.

“At this point we haven’t been out of something where we can’t at least get the people going, although maybe not the exact part of the exact chain or cassette they want,” Shirk said. “But there’s certain items if we don’t get them soon we’ll be in a little bit of a bind.”

Most bike shops don’t keep a large stock of extra parts needed to make bike repairs, instead placing orders with an expectation the parts will be delivered quickly.

For Lancaster County bike shops, such a just-in-time inventory model is made easier because bike parts supplier Quality Bicycle Products has a major distribution center in East Hempfield Township. If they don’t just go pick up parts themselves, Houser said he could typically place an order by 7 p.m. and have it delivered by noon the next day.

“That’s been an efficient model for us for years, but the pandemic broke that,” he said.

Instead, Houser said delays in getting parts has prompted bike shops to order parts for their immediate needs, as well as a few extra so they’re not caught short the next time. Yet such stockpiling is exacerbating the shortage of parts that prompted the extra ordering in the first place, creating a feedback loop Houser likens to the toilet paper shortages early in the pandemic.

The Minnesota-based company, which distributes bikes and bike parts and also engineers and designs bikes and parts made by its overseas manufacturers, has been leaning on manufacturers to get them more parts more quickly.

“We’re turning over every stone to secure the inventory as fast as we can,” he said.

As it tries to get the parts and bikes it needs to fill the current demand, Quality Bicycle Products is among those making a bet that the current interest in bicycling is not going away.

Schouman said Quality Bicycle Products is now placing orders for model year 2024 that reflect a demand for bikes that has surged at least 30% for bike manufacturers, and which he thinks will stay elevated.

“There’s absolutely some calculated risk in looking that far out in the future. But that being said, we really believe in the power of the bicycle, in terms of how relevant it can be for many individuals,” he said.

For the last 10 years, Schouman said the number of bikes sold had been relatively flat, even as bikes themselves had gotten more expensive. Yet with the pandemic prompting more people to take more bike rides, Schouman said he thinks a new bike boom is underway.

“We aren’t seeing any waning in terms of interest,” he says.

With rail trails being developed around the country, and many cities making cycling easier and safer with bike lanes and other infrastructure, Schouman says all the new cyclists will be encouraged to continue, while others will rediscover the childhood joy of riding a bike.

“We keep hearing people say over and over, ‘Oh, I remember how fun this was!” he said.

The Common Wheel, a nonprofit that promotes bike culture, has opened a new retail store in d…

Since Lowell Brown bicycled from his job in Akron to his home in Lancaster, he regularly nav…

Wearing masks in schools and Fulton Theatre's return: 8 articles to read this Monday

Too busy enjoying the spring weather this weekend to login and get your dose of LNP | LancasterOnline?