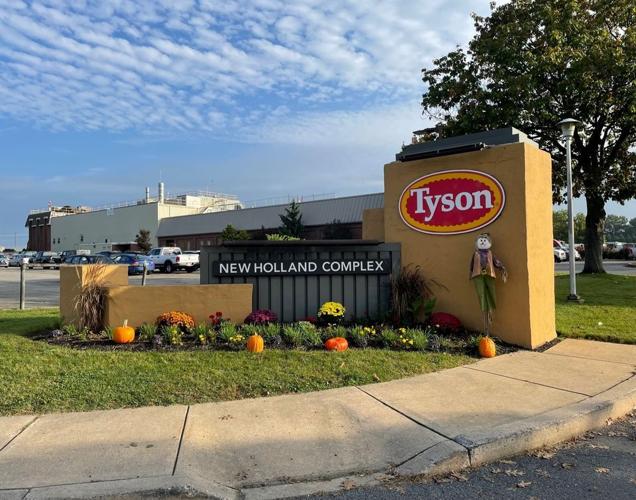 The main entrance to the Tyson Foods complex in New Holland.

The main entrance to the Tyson Foods complex in New Holland.

As the labor shortage here grinds on, and local companies keep raising wages to attract new employees, the juicier offers come with an unspoken caveat:

The higher pay only applies to hours that the employee works.

But in a stunning and potentially game-changing departure from that norm, one major employer here is eliminating that prerequisite.

Tyson Foods in New Holland has started offering a three-day workweek that pays employees for the 27 hours they work – and pays them for another nine hours they don’t.

The total of 36 hours per week makes them full-time employees, entitled to an array of benefits, most notably health insurance – medical, vision and dental.

“I don’t know of anybody else doing this,” said Albert Gonzalez, human resources manager for both of Tyson’s poultry processing plants here.

“I’ve heard of four 10-hour days with three days off,” he continued. “But to actually work three days with four days off – that’s something incredible.”

In addition to the new schedule, Tyson also has increased its minimum hourly rate to $17 and the sign-on bonus for new hires to $3,000.

And as if the wage, bonus, benefits and schedule aren’t enticing enough, Tyson temporarily added another unique incentive.

During a recent one-day event at Tyson’s New Holland complex that combined a job fair and food giveaway for the needy, each jobseeker was given what the food recipients got -- 40 pounds of free frozen chicken.

The three-day workweek, initiated by Tyson’s corporate headquarters in Arkansas as a pilot program, will apply only to the smaller of Tyson’s two plants here. The new workweek is expected to begin in January.

“The first imperative is to be the most sought-after place to work,” said Tyson President and CEO Donnie King to Wall Street analysts in mid-November.

King noted that jobseekers today “have many options. … We want to give them a better option,” mentioning that some Tyson plants are experimenting with on-site child care centers and health clinics.

On the local level, the new package of pay, bonus, benefits and schedule raises the ante in the bidding war for labor.

“What’s become clear in this current labor market is that employers must get creative if they want to attract and retain the workforce they want,” said Tom Baldrige, president and CEO of the Lancaster Chamber.

“Flexibility should not only be limited to office jobs, and (Tyson’s offer) shows that it can be done in a manufacturing setting.”

Here’s how the new three-day schedules will be laid out.

Tyson is offering the new schedules in two formats -- Monday through Wednesday and Thursday through Saturday.

Each of the three-day schedules will have first and second shifts. Employees will keep the days and shift they select; they won’t rotate between shifts.

A workday will consist of nine hours of work, one hour of paid break plus two extra hours of pay.

While the financial side of the new three-day schedule is eye-catching, Gonzalez points to the impact on the personal side too.

“I think, by us going to this new work schedule, it’s going to give people the opportunity to have that home-life balance, where they can come to work but have that time outside of work to enjoy their families, enjoy their hobbies and other things,” he said.

“I think this new schedule will be a great success.”

For instance, single adults or couples with a young child or children could save immensely on child-care expenses, simply by being home more days. Employees also could reduce their commuting expenses, Gonzalez said.

Unemployed and looking for work, Jonathan Huyard was about to start a seasonal job delivering packages when he spotted Tyson’s ad on LancasterOnline for a job fair at its New Holland complex.

The 35-year-old Atglen resident was attracted by the pay, the sign-on bonus and the three-day workweek, which would give him more time to spend with his 10-year-old son.

Huyard also liked the idea of working for an established company where a job could evolve into a career.

“Tyson is a big-time company,” he said.

So he and his father, Bob, 53, also an Atglen resident, drove together to the Nov. 2 event, which combined a job fair with a food giveaway for the needy. They were the first of 54 job applicants.

They met with the human resources department, took a plant tour and were hired on the spot. Huyard started Nov. 8 as a backup machine operator, mixing ingredients for the breading that goes on chicken.

Besides the money, benefits and the upcoming schedule, Huyard said he also enjoys the people and the work. “If somebody else was looking for a job, I would recommend this place to work at, for sure,” he said.

Short end of the stick

While the higher pay is a good deal for new hires, Tyson’s wholesale customers and ultimately consumers might be less enthused.

That’s because Tyson is passing on its higher labor costs to its wholesale customers, such as stores, restaurants, schools, hospitals and the military.

And those customers who sell to the public are highly likely to pass along as much of that increase as possible to consumers.

On the same Nov. 15 conference call with Wall Street analysts, Tyson’s CFO discussed how the company has been using price hikes to recoup higher costs for labor, transportation, packaging, grain and ingredients.

Tyson will continue to rely on price hikes, and other means, for recovering its higher costs for labor and other inputs, Glendinning said.

“We will remain disciplined and agile in our pricing initiatives to ensure that any additional inflationary pressures are passed along to customers, while also working diligently to deliver productivity savings to reduce costs,” said Glendinning, according to a call transcript provided by Seeking Alpha, a website that provides information for investors.

Tyson, a $47 billion corporation that acquired the former Victor F. Weaver facilities here in 1989 through its purchase of Holly Farms, has two local facilities.

Tyson calls them the fresh plant and the further-processing plant, with a combined workforce of 872 people.

The fresh plant, where live chickens are slaughtered, cut up and deboned, employs 538 people. Its employees will continue to work a five- or six-day schedule.

In the further-processing plant, the meat is formed with molds into nuggets, patties and french fries. (So-called “bone-in” products such as chicken legs, wings and thighs bypass the forming step.) Then the meat is fully cooked, fully frozen, packaged and shipped to the customer. This plant employs 334 people.

Only the further-processing plant is switching to the three-day workweek. There Tyson hopes to add 200 workers.

Between the extra workers and the three-day schedule allowing the plant to operate more hours per day, Tyson hopes to boost the further-processing plant’s output at a time when demand is growing rapidly.

Some 86 people have been hired for the three-day schedules so far, though they’re already getting trained and starting to work, albeit under the traditional schedule for the time being.

“No, not at all. This is due to growth in our business here,” Gonzalez said. “We’re bringing more jobs to the community. We’re very happy that we can do this.”

The New Holland facility is the second of Tyson’s 14 further-processing-only plants nationwide to offer a three-day schedule.

A Tyson further-processing plant in Little Rock, Arkansas, which does a somewhat different type of processing, implemented the three-day workweek in August, Gonzalez said.

Here’s a closer look at the wages and bonuses paid at the further-processing plant.

People hired now will work the current five- or six-day schedule for the time being, transitioning with all of the plant’s workforce to the three-day schedule sometime next month.

Sign-on bonuses for first and second shifts increased in September by $750 to $3,000.

Effective in January, workers hired for the Thursday-through-Saturday schedule will get a $4,000 sign-on bonus.

While the dollars and schedule make Tyson stand out, the company has more attributes than those, said Gonzalez, who will mark 17 years at Tyson in January.

The New Holland complex’s workforce hails from 38 countries, according to Gonzalez, with many immigrants becoming naturalized U.S. citizens with Tyson’s support. Since 2006, Tyson has paid more than $92,000 to reimburse the citizen-application fees of 147 employees.

Vince DiStefano, director of information and facilities for the Godfrey marketing agency in …

Small businesses continue to struggle with the impact of the pandemic, particularly when it …