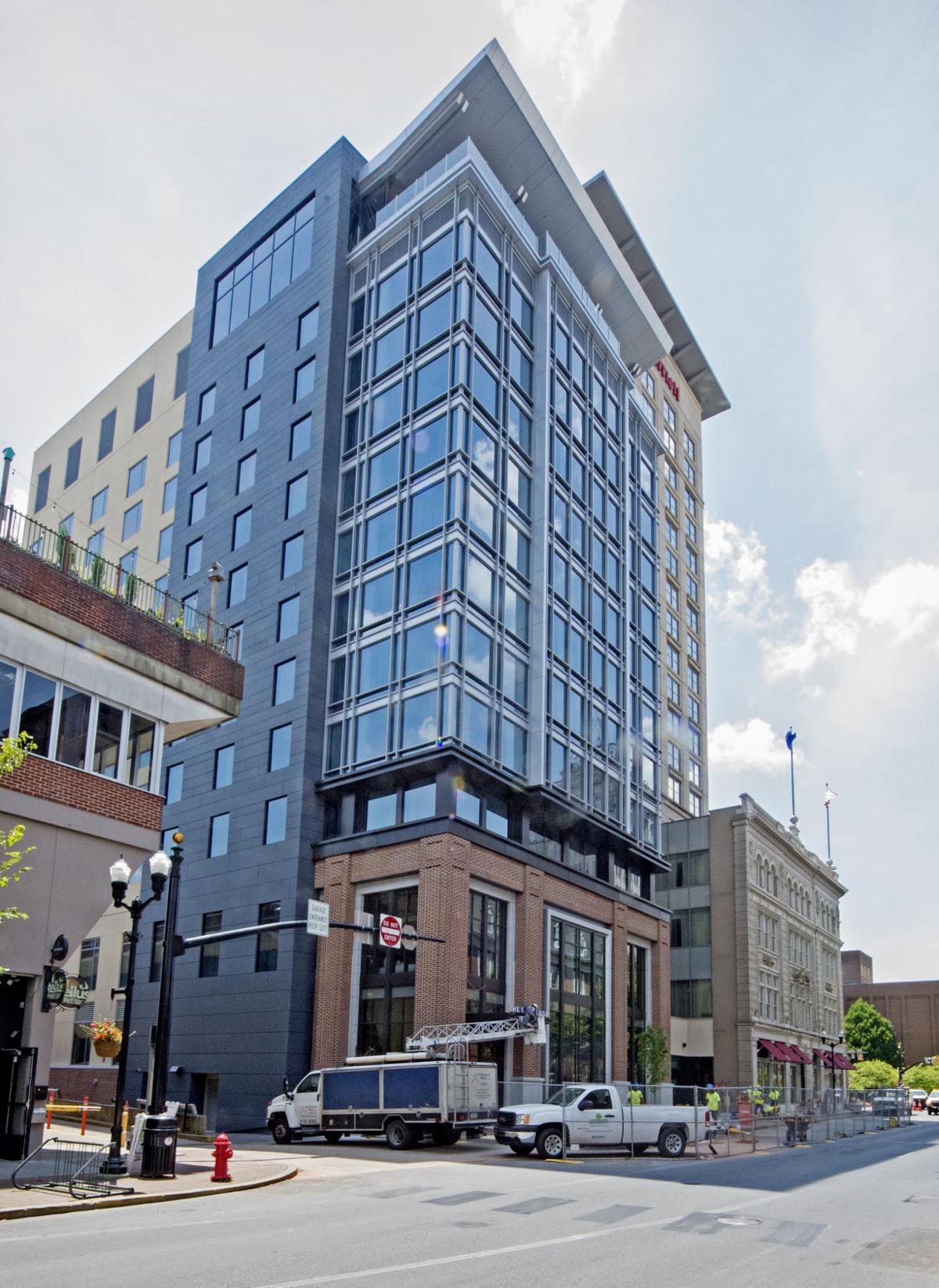 The east tower of the Lancaster Marriott is nearing completion in this June 26, 2019, photo. 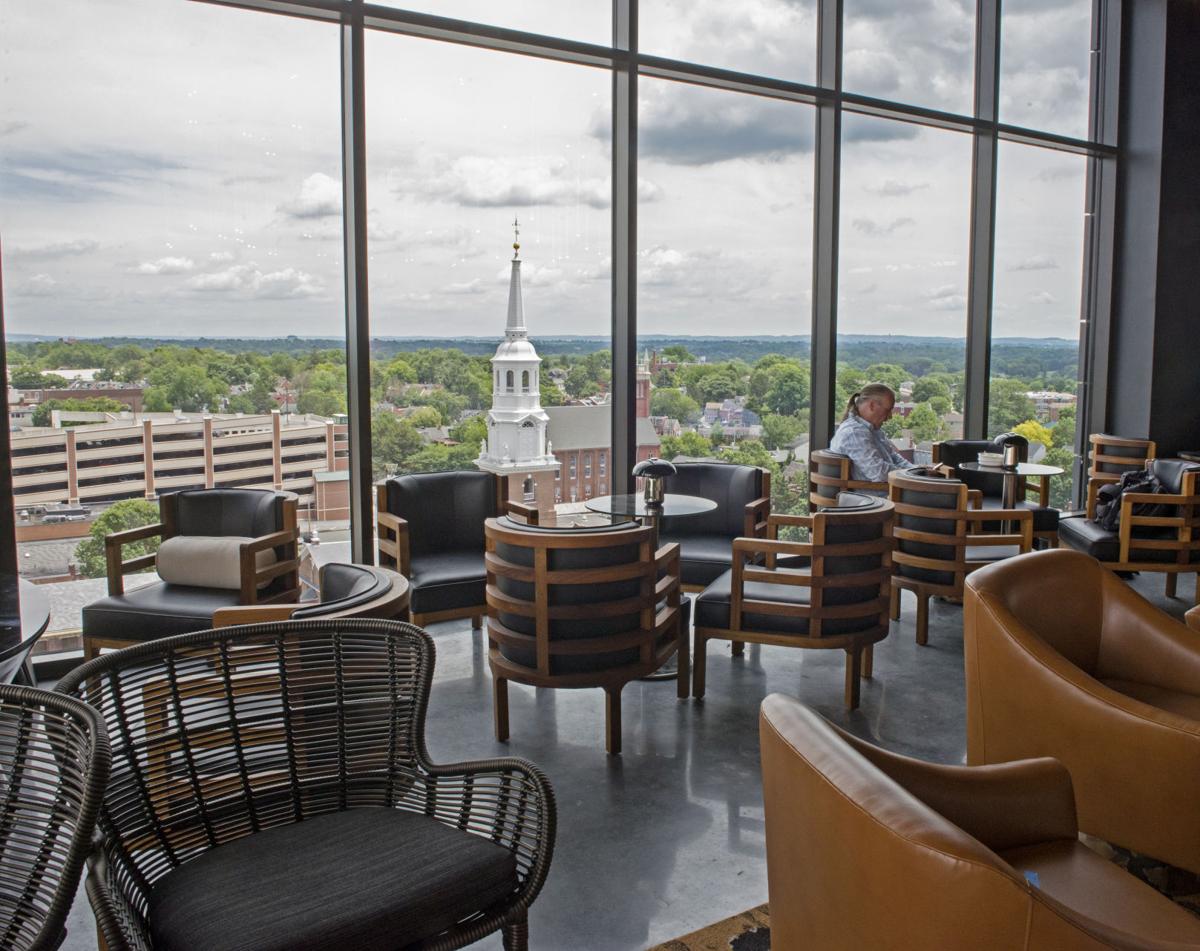 Windows line the east side of The Exchange, a new cocktail bar on the top floor of the east tower of the Penn Square Marriott Tuesday, June 25, 2019. 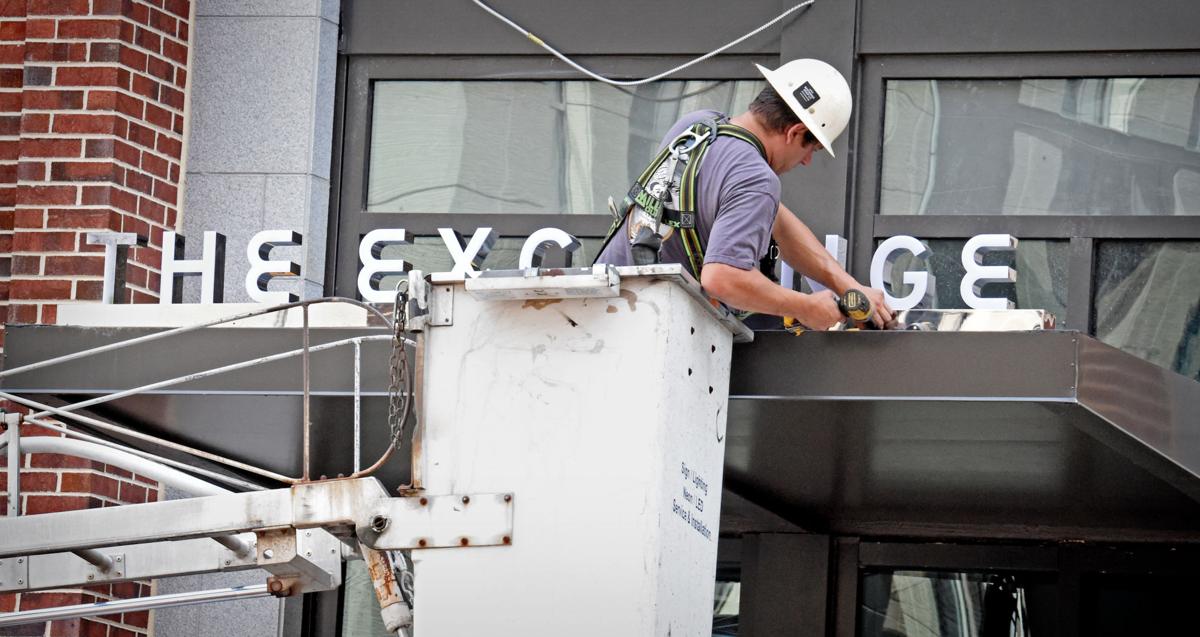 A worker installs a sign for The Exchange over a door to the east tower of the Lancaster Marriott Wednesday, June 26, 2019. 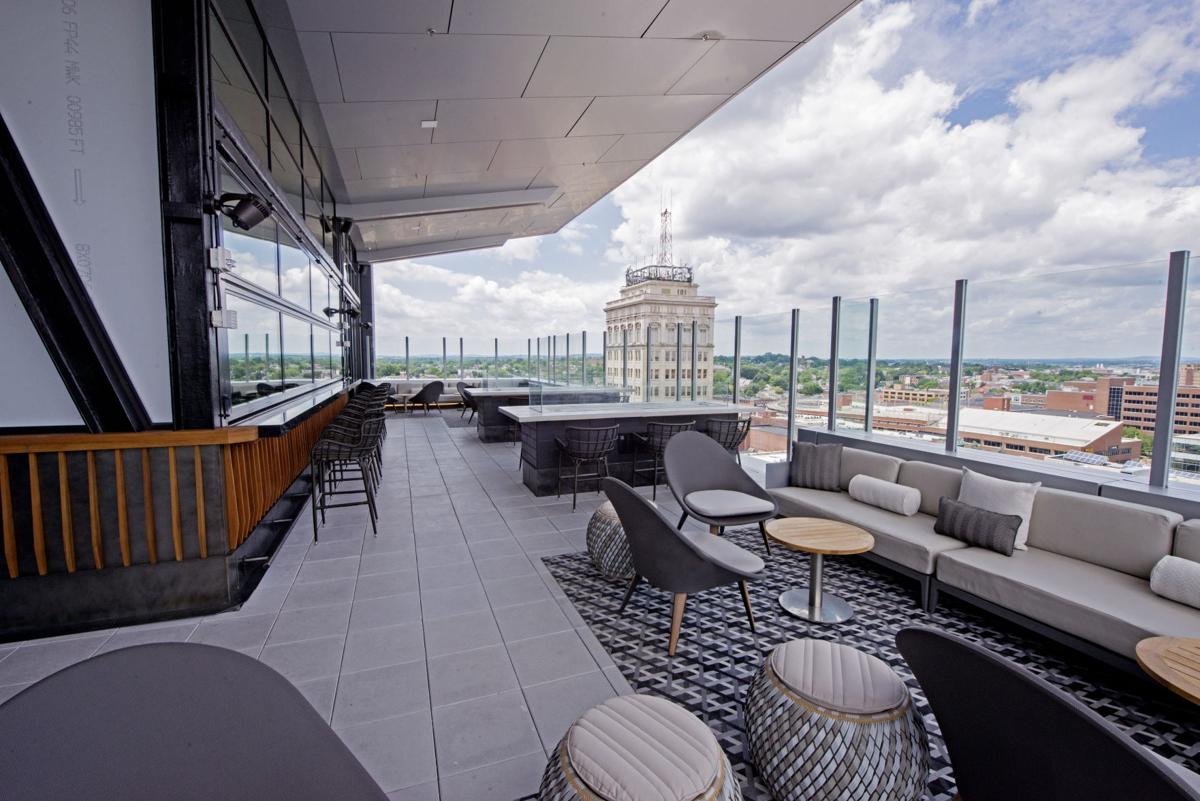 The roof overhangs an outside area at The Exchange, a new cocktail bar in the east tower of the Penn Square Marriott Tuesday, June 25, 2019. 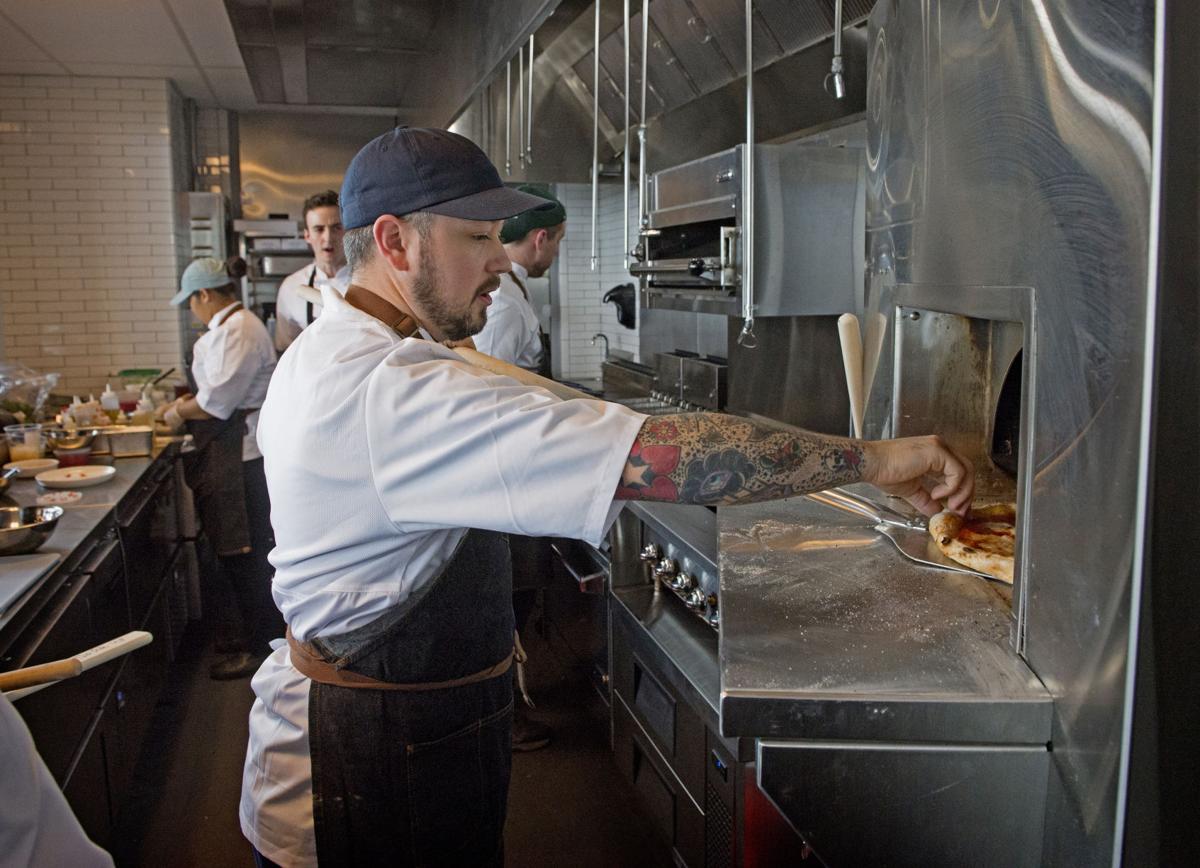 Chef Ryan McQuillan check a pizza in an over at The Exchange, a new cocktail bar in the east tower of the Penn Square Marriott Tuesday, June 25, 2019. 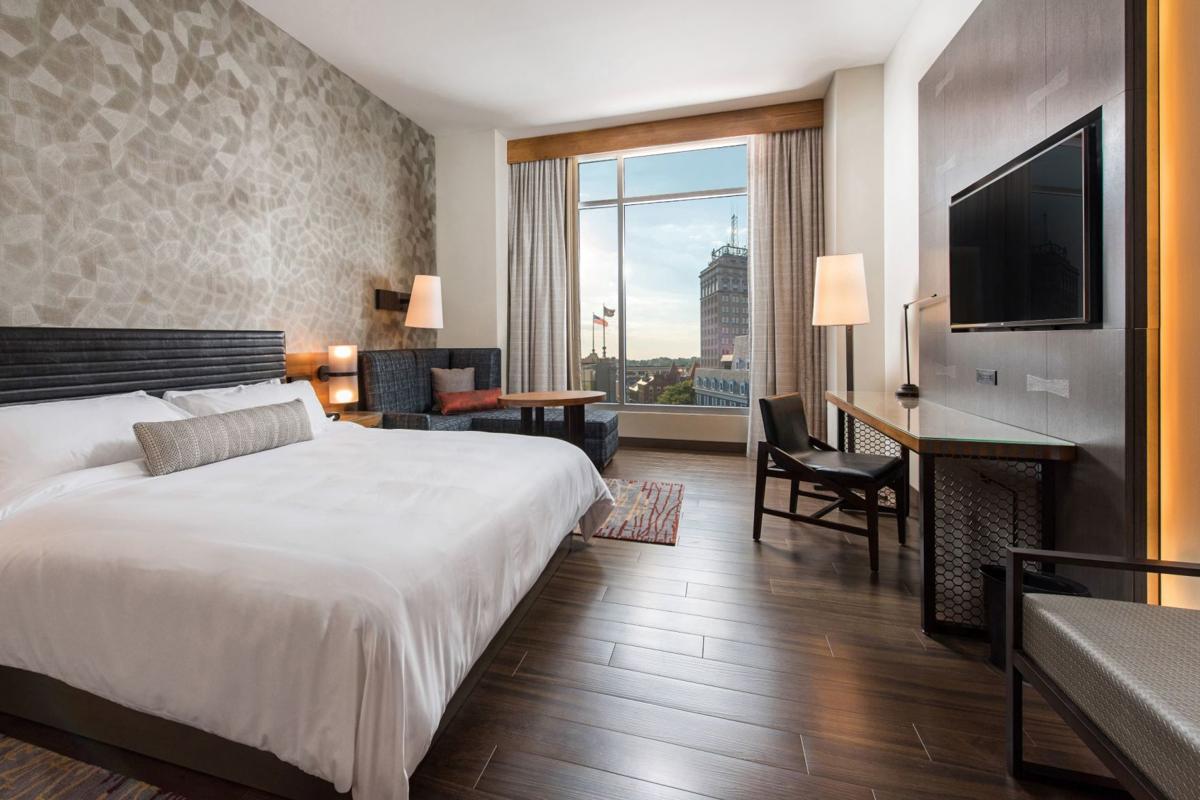 A model room shows the new decor at the Lancaster Marriott at Penn Square. 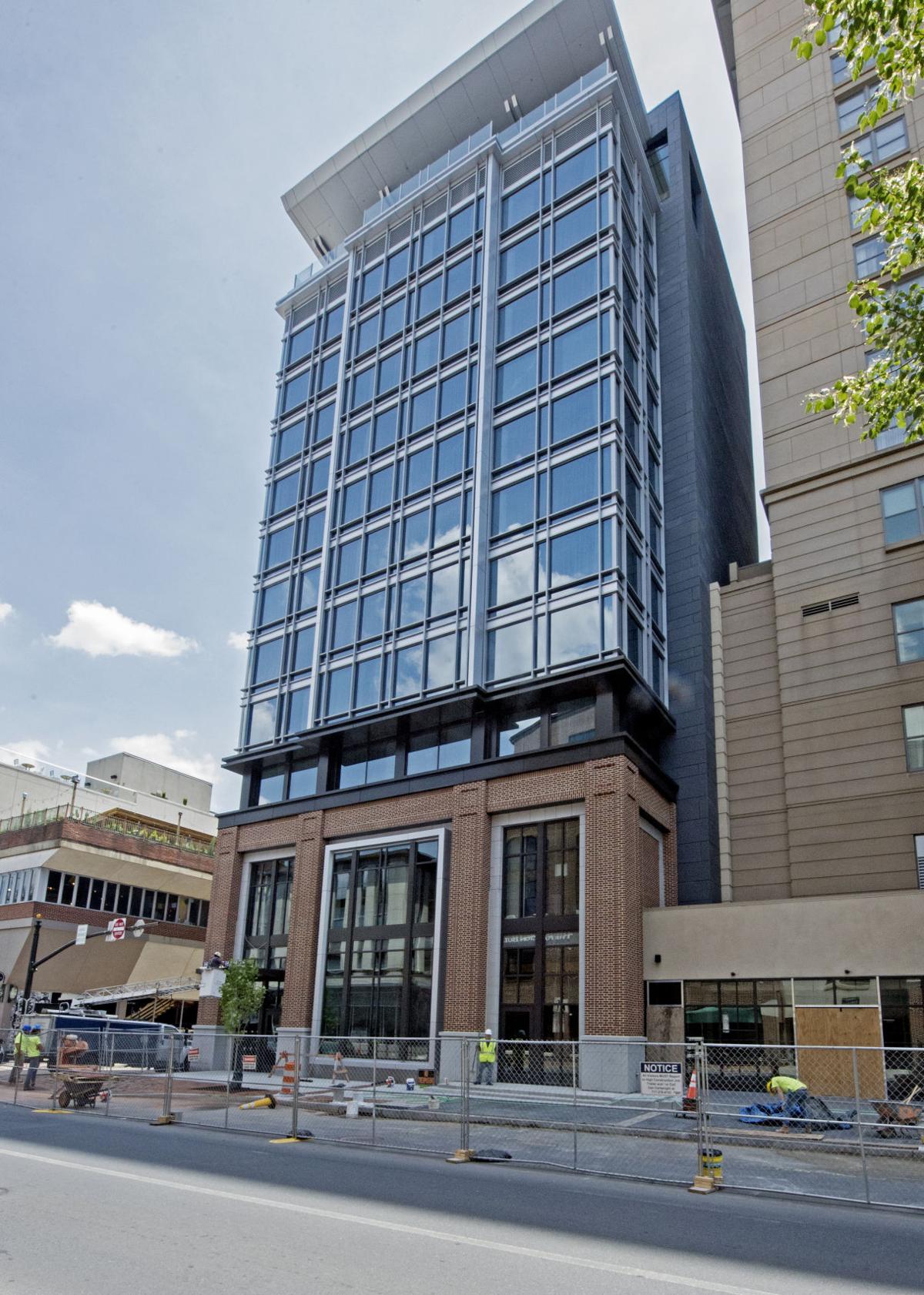 The east tower of the Lancaster Marriott is nearing completion in this June 26, 2019 photo.

The east tower of the Lancaster Marriott is nearing completion in this June 26, 2019, photo.

Chef Ryan McQuillan check a pizza in an over at The Exchange, a new cocktail bar in the east tower of the Penn Square Marriott Tuesday, June 25, 2019.

The east tower of the Lancaster Marriott is nearing completion in this June 26, 2019 photo.

It was January 2015 when developers of the Lancaster Marriott at Penn Square proposed adding a second tower to their 300-room hotel.

Two reports had warned that a shortage of rooms within walking distance was impacting business at the adjacent Lancaster County Convention Center.

Adding capacity, they advised, would allow the complex to attract more large events and retain ones that might otherwise outgrow it.

The redevelopment authority owns the hotel property and leases it to developer Penn Square Partners.

An affiliate of High is the general partner in Penn Square Partners. An affiliate of LNP Media Group, publisher of LNP and operator of the website LancasterOnline, is a limited partner.

The convention center is owned by a public authority.

The original Marriott and the convention center turned 10 years old this month, having opened for business June 19, 2009.

In 2012, the firm Conventions, Sports & Leisure International said a lack of hotel rooms already had kept nine or 10 large events from booking the convention center. A 2014 report done for Lancaster City Alliance reached a similar conclusion, leading the alliance in 2015 to call for 300 additional city hotel rooms to be built by 2030.

Four years later, “we are getting very close to that,” alliance President Marshall Snively said.

Meanwhile, another 216 rooms are available a few minutes’ walk away at the newly renovated and rebranded Holiday Inn Lancaster, 26 E. Chestnut St. About 40% of its rooms were offline prior to its renovation.

“We are excited to partner with the Marriott and the convention center to bring more and more people and positive energy to Lancaster,” said John Meeder, the Holiday Inn’s developer.

Studies confirm that overnight guests spend significantly more money than day-trippers, he said. He offered “a big thank you and congratulations” to the Marriott and Holiday Inn alike.

“There’s not a hotel in Lancaster County I’m not a fan of,” he said.

The walk between the Holiday Inn and Penn Square takes you through one of the most vibrant small cities around. Visitors enjoy discovering what’s here, and their presence increases business for downtown restaurants, shops and other venues.

Lancaster enjoys a stellar reputation, and the city plays a key role in the Marriott’s and convention center’s marketing, Smithgall said.

Those efforts are led by sales and marketing director Josh Nowak. He said the larger stock of hotel rooms becoming available has indeed helped in booking larger events, but he stopped short of citing specific examples.

A bar, a restaurant, a lounge

What else is coming to the Marriott besides more rooms?

At the top of the east tower sits The Exchange, a rooftop bar featuring craft cocktails and artisanal small plates. Slated to open Monday, it has a dedicated entrance at ground level, making it fully accessible to the general public as well as hotel guests.

It has indoor and outdoor seating, both offering panoramic views of Lancaster.

In the original Marriott, the former Penn Square Grille space is being renovated to host a new flagship restaurant, Plough. Set to open in August, Plough is centered around a display kitchen and boasts a circular bar and seating for about 190 people.

To its east will be a breakfast eatery named Two Kings.

Plough’s opening will free up the convention center’s front lobby for a renovation there. It has been used as a temporary bar and restaurant during Plough’s construction.

Upstairs, in what is now labeled the west tower, the rooms are being redone.

It’s standard procedure for brands like the Marriott to undergo a “refresh” every decade or so, Smithgall said.

The work began in mid-April and is proceeding three floors at a time, top to bottom, at a cost of about $4.5 million.

When complete, the west tower rooms will match their east tower cousins, with new flooring, wall treatments and furnishings. The flooring being used is a high-end luxury product manufactured by Armstrong Flooring right here in Lancaster County, Smithgall said.

A concierge lounge on the 18th floor is being replaced with an M Club lounge on the first floor for loyalty program members and guests who upgrade their reservations. The M Club concept is relatively new for Marriott, and Lancaster’s is among the first in a market this size, Smithgall said.

Between that and a few other layout changes, the west tower’s rooms will total 306. Adding the east tower’s 110 rooms brings the total to 416, including 13 suites.

Everything should wrap up by September, Smithgall said. The hotel’s number of full-time equivalent jobs is increasing by 40 to 240, he said.

A celebration to mark the new tower’s debut and the existing complex’s 10th anniversary is planned for Aug. 21.

Work on the east tower project began in May 2017. It generated about 500 construction jobs, Penn Square Partners said.

About $9 million of the financing is provided through the City Revitalization & Improvement Zone program, which allows developers to apply what would otherwise be state and local business taxes to debt service.

The remainder was funded by bonds issued through the redevelopment authority, which Penn Square Partners is paying down. The partnership also made a $2.5 million equity investment.

Because the Marriott properties are leased from the redevelopment authority, they are tax-exempt.

Instead, under a payment-in-lieu-of-taxes agreement, or PILOT, Penn Square Partners pays a base rent plus additional amounts if certain profit thresholds are reached.

City officials have said they expect the PILOT to generate more revenue than Lancaster would get if the property were taxable. In 2017, the city agreed to share the PILOT with the School District of Lancaster.

Restaurants, bars in Lancaster area offering delivery or pickup options amid state shutdown due to COVID-19

Some of our COVID-19 coverage will require a subscription to read. Here's why.

A celebration is being planned for Aug. 21 at the Lancaster County Convention Center and Lancaster Marriott at Penn Square.

It will mark the two facilities’ 10th anniversary and the debut of the Marriott’s new east tower.

More details will be forthcoming as the date approaches, officials said.

Sunday will be a little more seasonable outside, being the first day to break the projected 90s temperatures in the last four days or so.

The man who sexually assaulted and killed schoolteacher Christy Mirack in 1992 pleaded guilty, closing the door on a murder case that went uns…

Lancaster County has more than 100 hotels and motels, according to lodging-industry data firm STR.