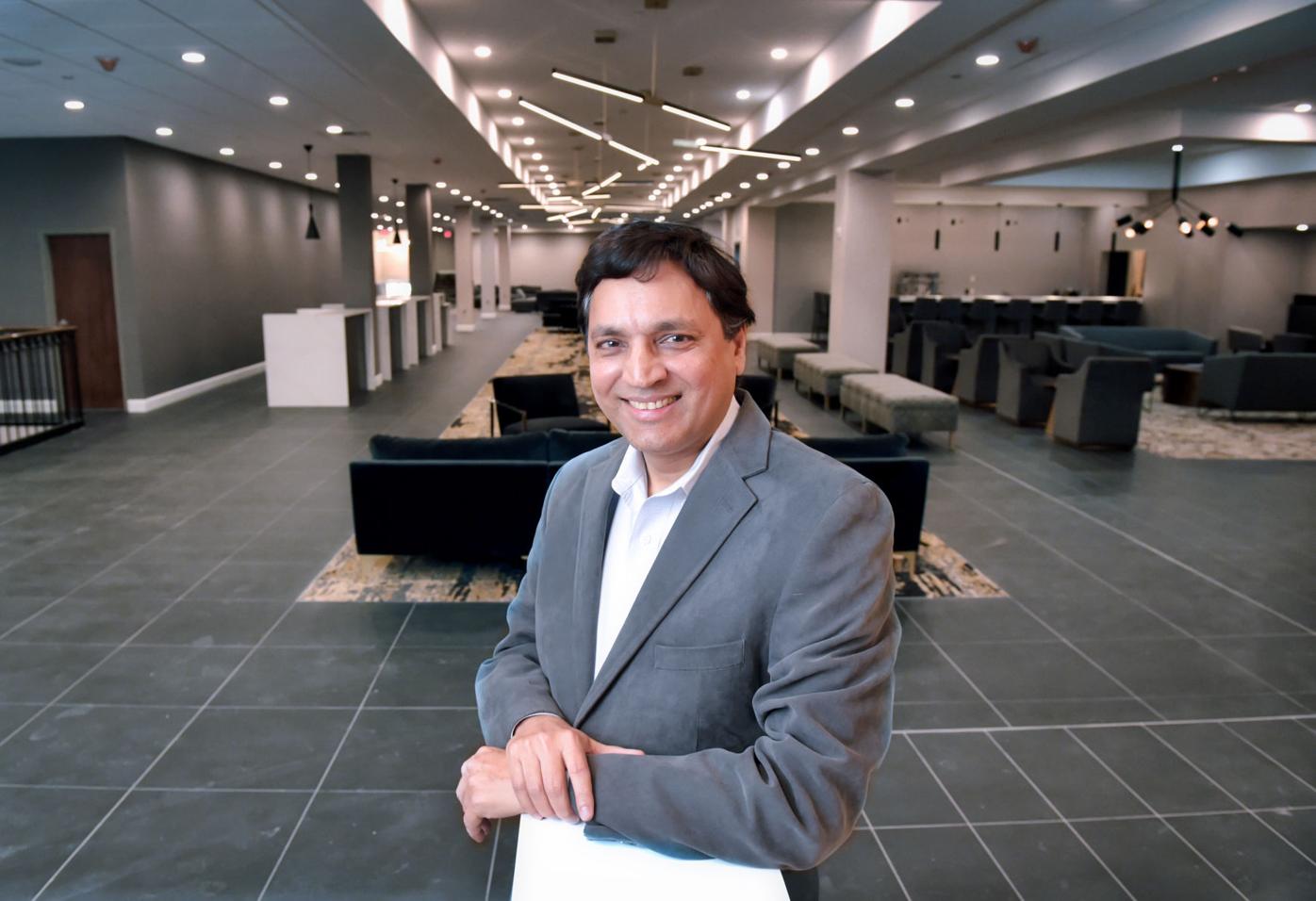 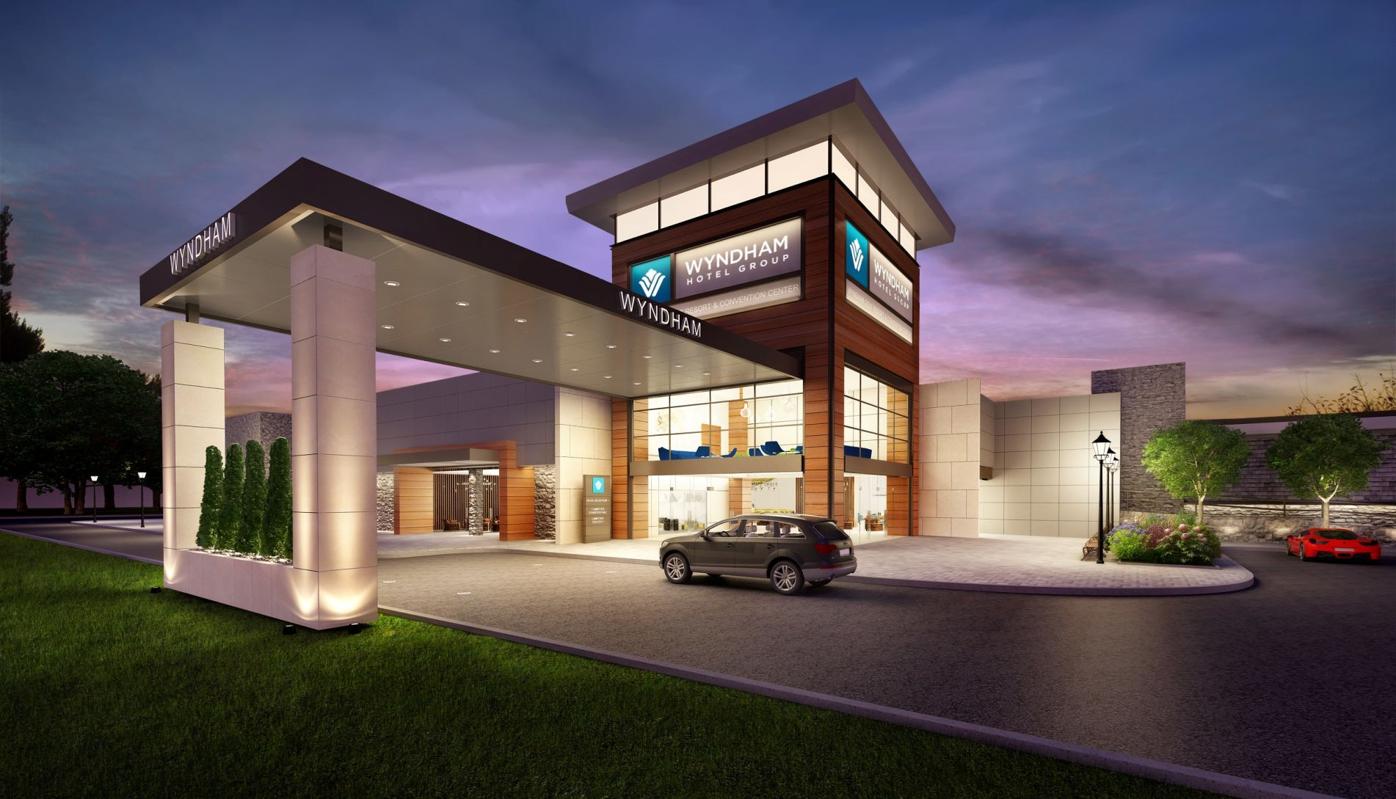 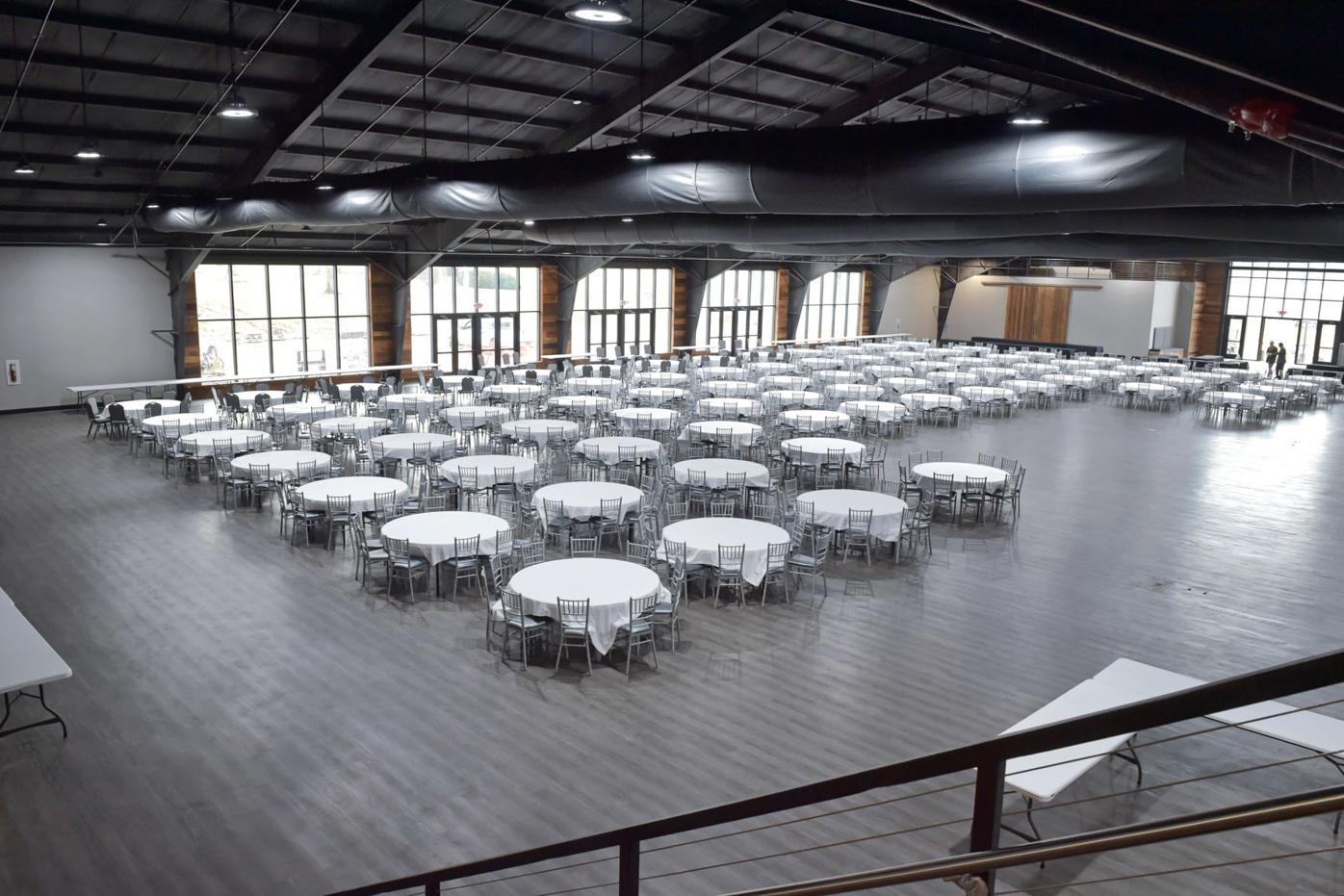 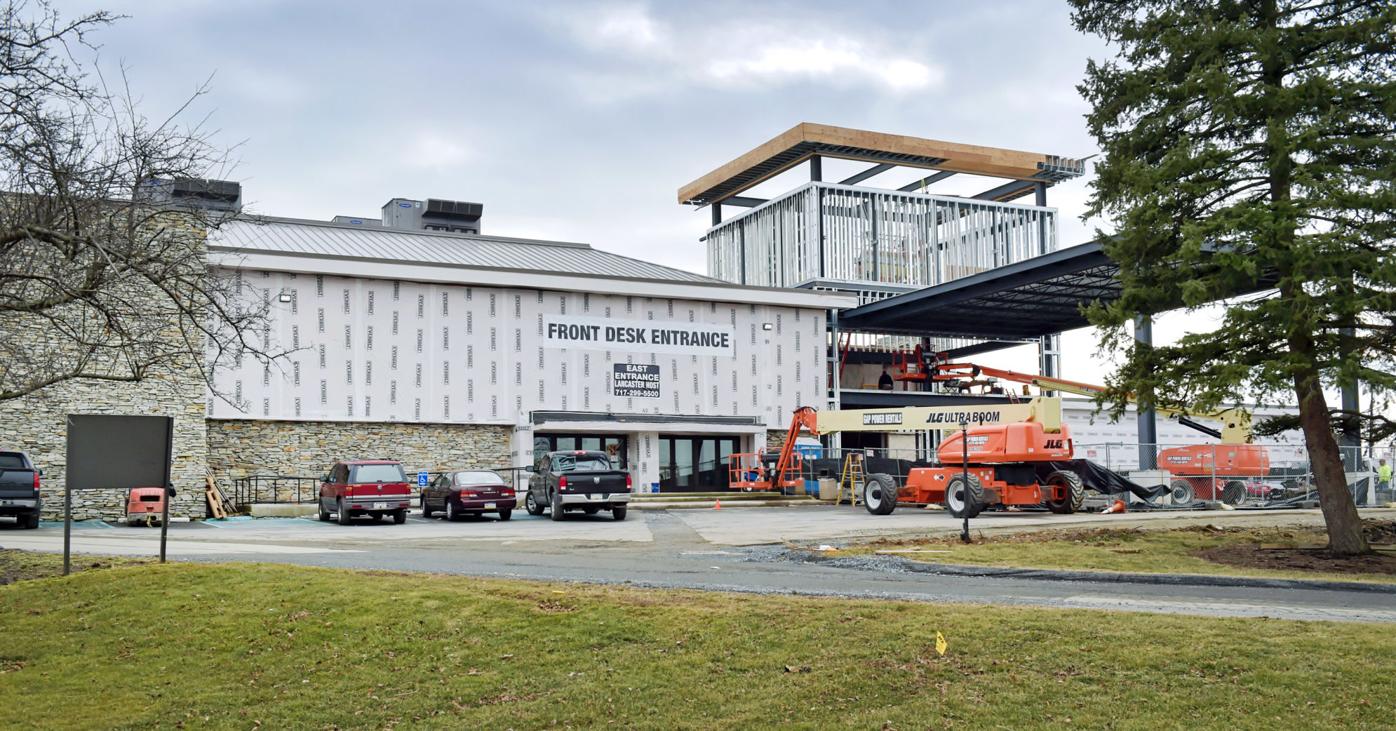 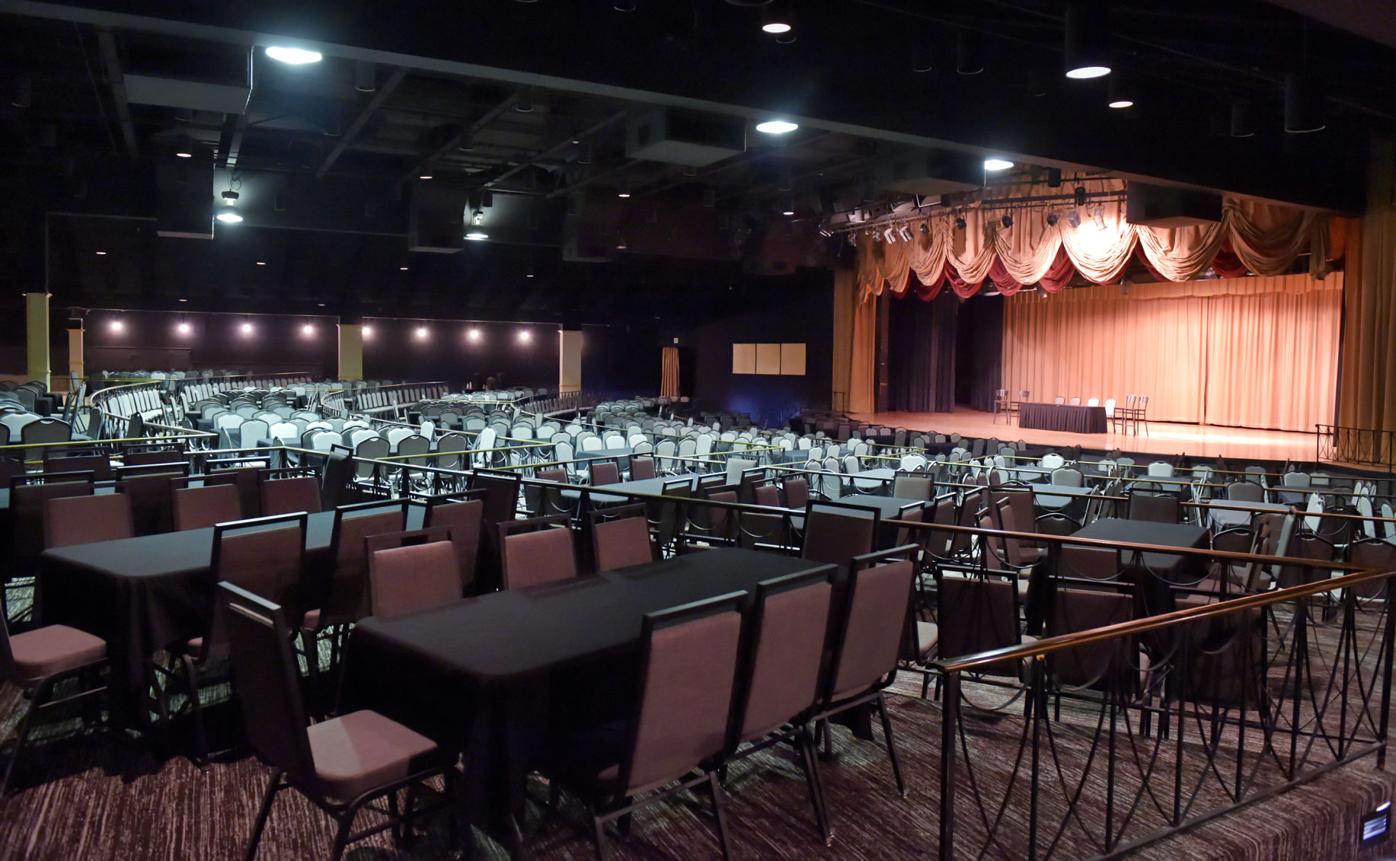 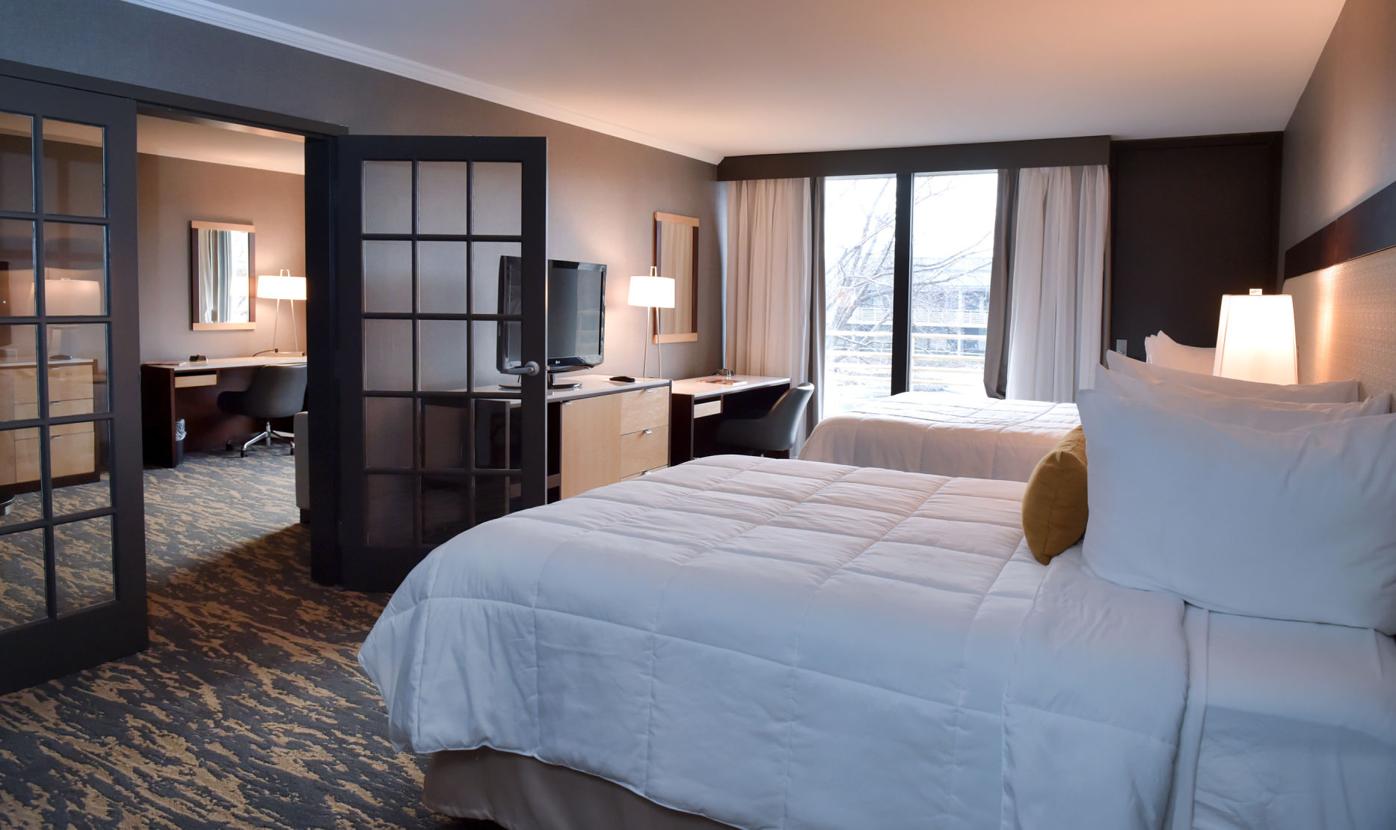 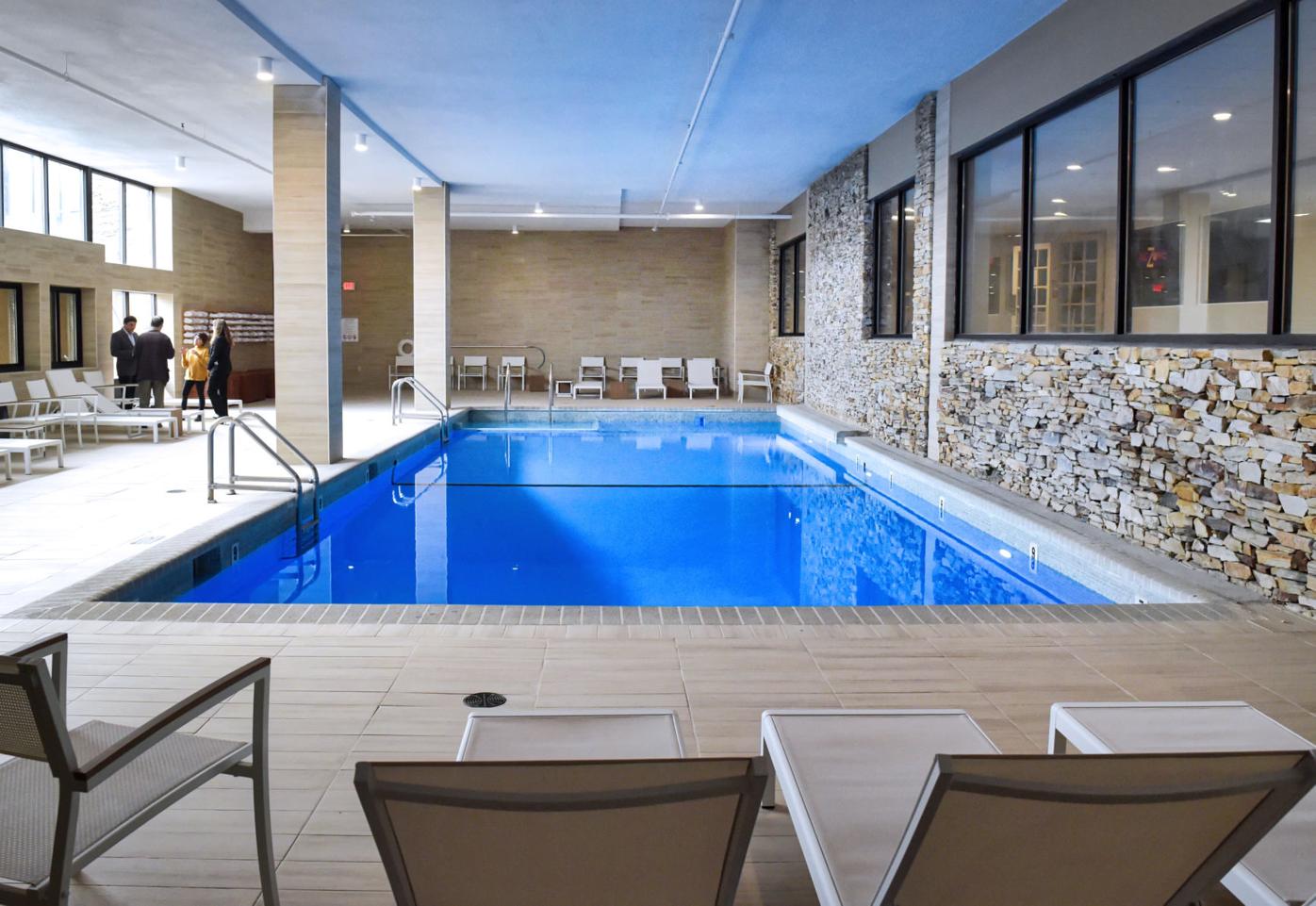 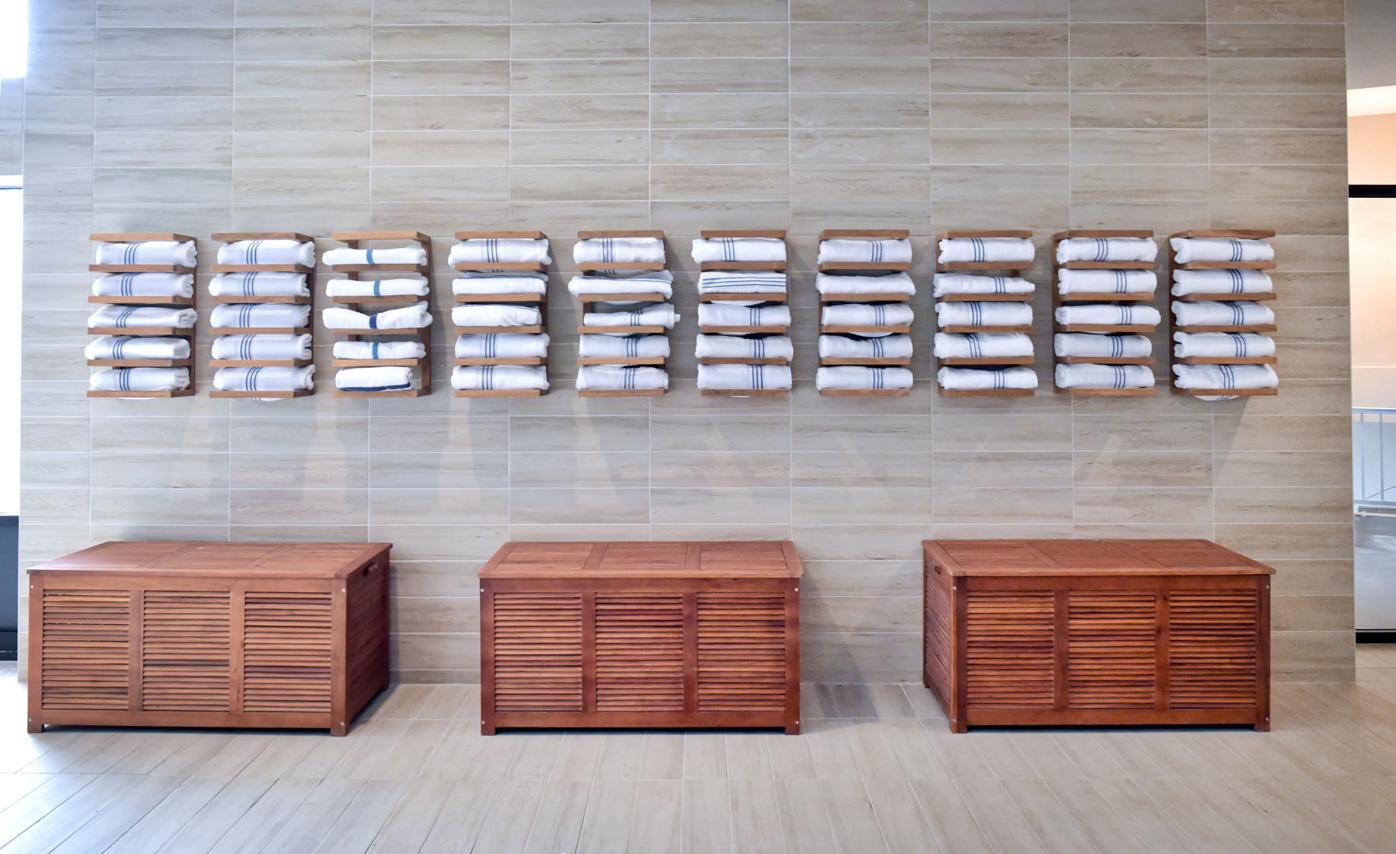 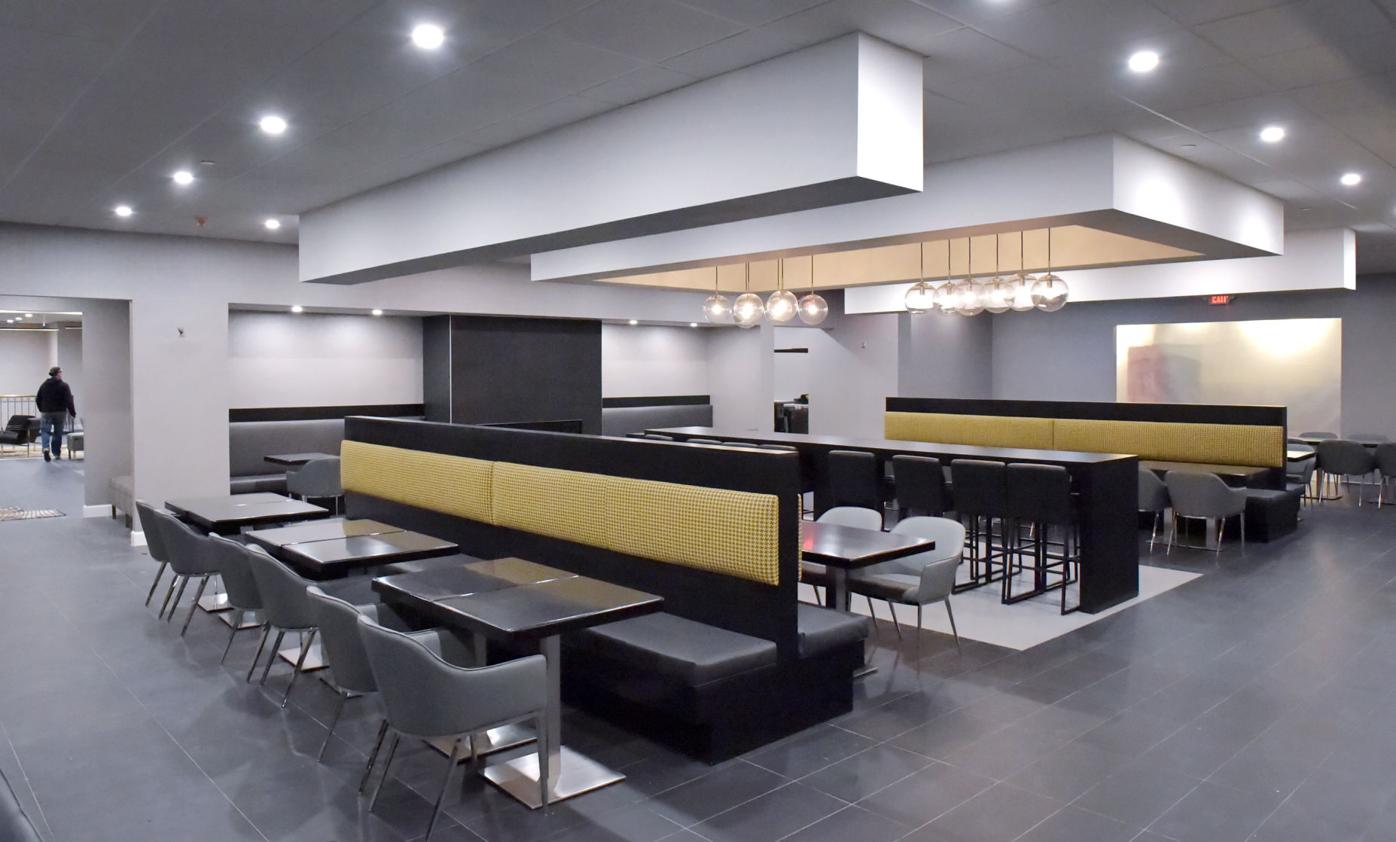 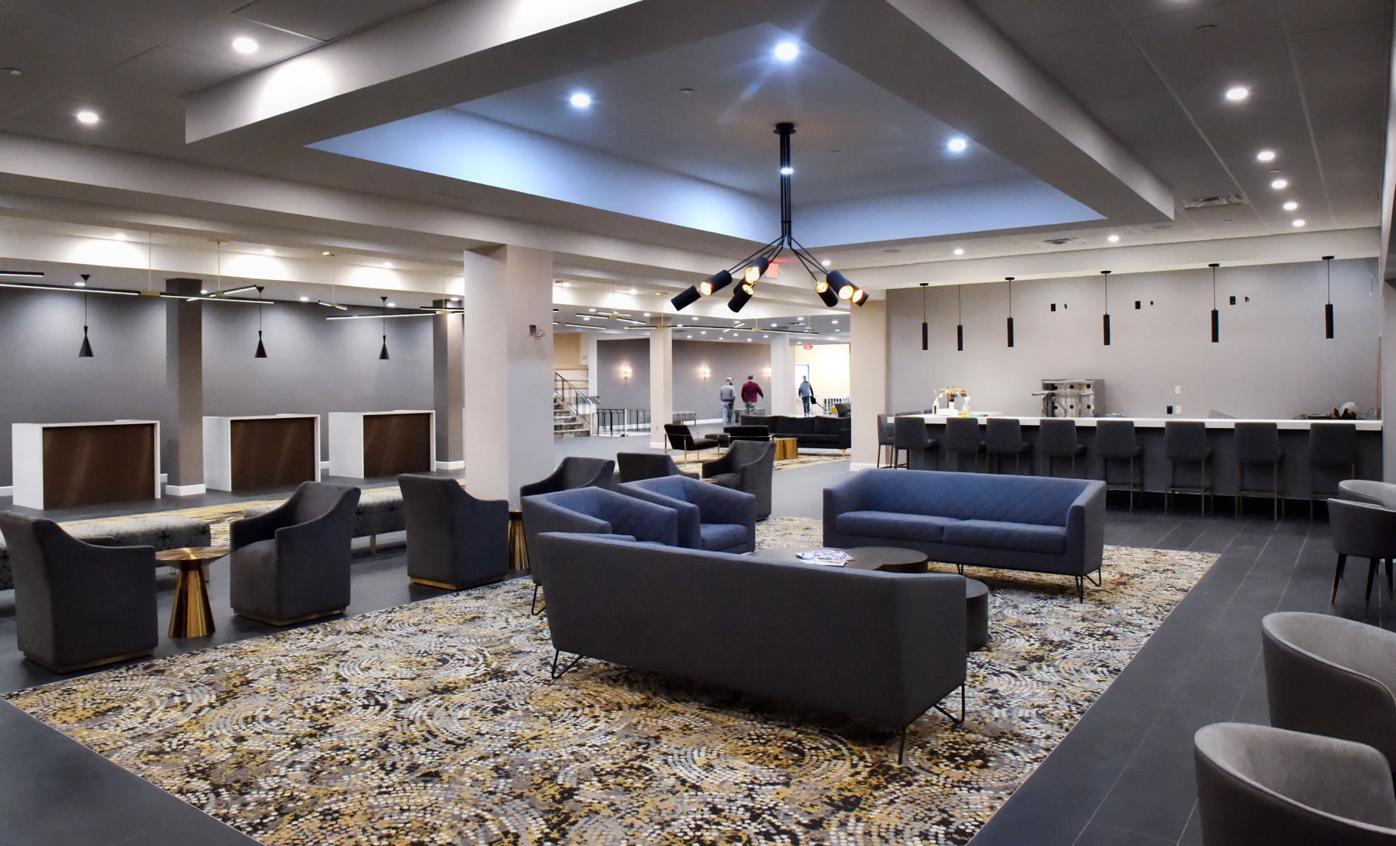 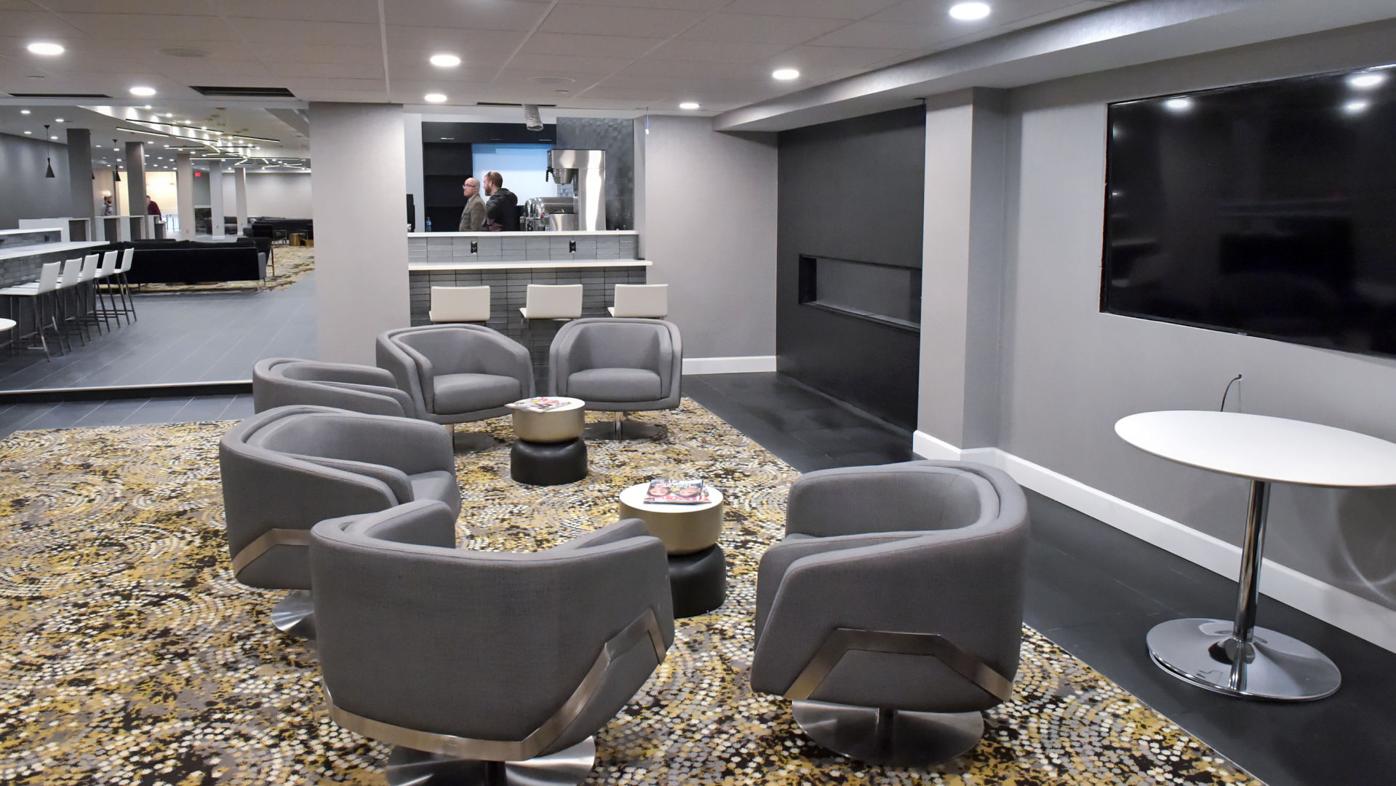 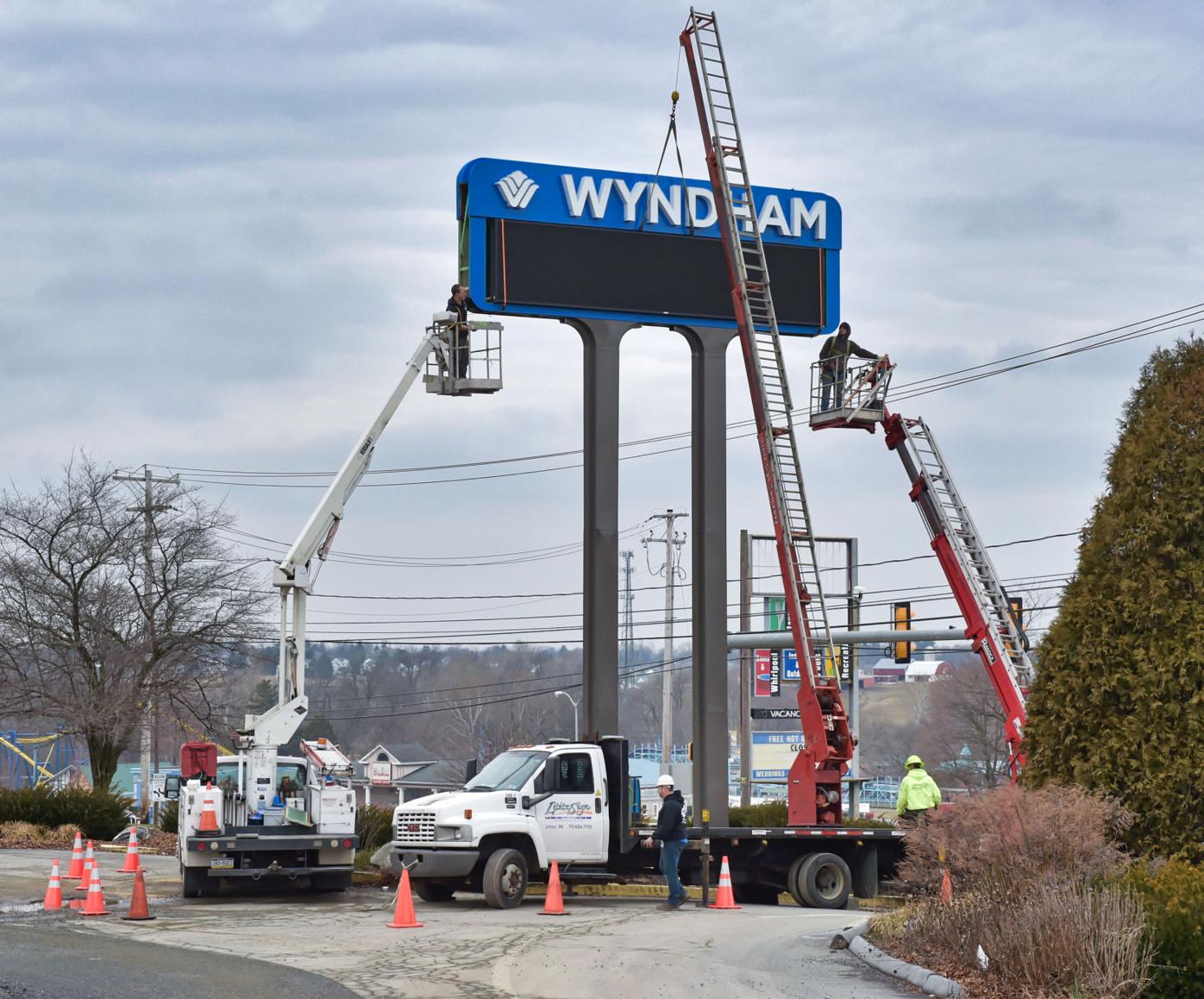 No matter how many costly surprises he encountered, Kalpesh Vakil kept his eyes on the prize.

Vakil and business partner Jason Cheng bought the Lancaster Host Resort in 2016 for $6 million, aiming to revitalize the faded property.

They figured it would cost about $15 million and take about 18 months until the resort was poised to take full advantage of its prime Lincoln Highway East location.

Soon, however, Vakil and Cheng discovered that the county’s largest hotel had many more issues than they had realized.

Undeterred, they roughly doubled their renovation budget to $27 million and the timeline to three years.

Now their “extreme makeover” to transform, modernize and reposition the landmark is 90 percent complete.

Renamed the Wyndham Lancaster Resort & Convention Center, the 317-room luxury facility anticipates having a grand reopening in May.

The resort has stayed open during the renovation process, serving its group and meeting clientele.

In the meantime, all guest rooms have been refurbished and are available to be booked.

Work continues to revamp and slightly relocate the main entrance, redo the lobby, replace the restaurant, add a spa, upgrade the golf course’s pro shop and complete other changes.

As that grand opening nears, the Wyndham is increasing its workforce. With 40 employees currently, it anticipates having 100 by June, 180 by October and 300 by spring 2021.

“Nobody believed this place could get back to what it was before. But I promised that this place will again be number one” in the county, said Vakil on Thursday.

“This facility is the phoenix that will rise from the ashes,” said Tom Shreffer, director of catering and conference planning.

From its opening in 1966 through the 1980s, when it was known as the Host Farm, the Lancaster Host was the county’s premier lodging, meeting and entertainment space.

Stars of that era regularly performed there, among them comic Red Buttons, comic Morey Amsterdam, classical guitarist Andres Segovia and The Golddiggers singing and dancing troupe.

Then the site gradually lost its luster.

The property sank to its nadir on Memorial Day weekend 2016, a month after Vakil and Cheng bought it. An air conditioning pipe broke and flooded much of the building.

Hundreds of guests evacuated; the East Lampeter Township hotel stayed closed for a month as repairs were made.

Since that low point, Vakil said, he’s been steadily rebuilding the property’s reputation as well as its structure. More than an owner, he’s the hands-on day-to-day operator, too -- which explains why he hasn't had a vacation in three years.

As Vakil describes it, he’s shown neighbors and township officials that he’s willing to spend the time and money to achieve lasting solutions to vexing problems such as stormwater management.

Township Manager Ralph Hutchison praised Vakil and Cheng for turning around a property that’s a crucial contributor to the township’s and county’s economy.

Besides its exceptional size, its “location on the Lincoln Highway corridor, which is the hub of tourism in the County, makes it even more important that it is restored as an attractive destination,” Hutchison wrote in an email.

The conversion of the former Lancaster Host site is only part of the rebirth of that busy two-mile corridor over the past two years.

Most notably, the former Continental Inn is becoming a Cartoon Network Hotel, Tru by Hilton replaced the Passport Inn, Tanger Outlets expanded and Rockvale Outlets transitioned into The Shops @ Rockvale.

Vakil, 57, a native of India who has lived in Hershey for 14 years, is a certified public accountant who has 22 years of experience in the hotel industry.

He and Cheng own the Crowne Plaza Harrisburg hotel too. Cheng, of Edison, New Jersey, is an owner of 12 other hotels. Vakil also owns the Coliseum Megaplex arcade, bowling alley and sports bar in Camp Hill.

While Vakil and Cheng indeed are different owners than the property had in the past, they also face a different competitive landscape than the Host Farm did in its glory days.

The largest change to that landscape is the 10-year-old Lancaster County Convention Center and adjoining Lancaster Marriott at Penn Square.

The Marriott is undergoing a $39 million expansion that will add 110 rooms, giving it 416 — which will far surpass the Wyndham for most in the county.

Yet Vakil said he doesn’t see the downtown complex as a direct competitor.

The Marriott and convention center tout nearby urban amenities such as an abundance of restaurants, nightspots, art galleries, the Fulton Theatre and other attractions.

The Wyndham highlights its proximity to suburban amenities, Vakil explained.

These include its own golf course plus Tanger Outlets next door, Dutch Wonderland across the street, American Music Theatre down the street and Amish country a short drive away.

“Personally, I think we are competing with Hershey (Lodge) and Valley Forge (Casino Resort),” he said.

When a spokesman for the Lancaster Marriott at Penn Square and Lancaster County Convention Center was asked for his take on Vakil’s perspective, he did not respond to it directly.

“We welcome all partners investing in supporting Lancaster’s presence as a destination for leisure and business travelers,” Josh Nowak, their director of sales and marketing, wrote in an email.

Vakil believes a key to winning that competition with the Hersheys and Valley Forges of the mid-Atlantic region will be the upgraded facility and the Wyndham flag.

Becoming a Wyndham franchise, which took effect in December, brings a strong reputation, powerful reservation system and robust appeal to the group, business and leisure markets, he said.

Then there’s the numerous extra touches to improve the guest experience at his property.

These range from installing extra padding under the new carpet, to giving guests the option of a tub or shower stall in their bathroom, to installing a refrigerator in every guest room, not just the suites.

“I believe in customer service,” he said. “If I make my customers very happy, I don’t have to go and hunt for business. They will come automatically.

“If I take their money, I want to make sure they feel like they got more than they spent,” Vakil said.

Vakil hopes he and Cheng get more in return than they’re spending, too.

Initially, he acknowledged, “I didn’t know what I was getting into. ... It’s like building a brand new hotel.”

From the outset, he knew he had a long to-do list: gut and rebuild all the guest rooms, replace the single-pane windows with double pane, improve access for people with disabilities, replace the carpet, shift the main entrance, add a tower at the entrance (with a lounge and office space) and replace the restaurant.

Some things ended up costing far more than expected, such as replacing the bathrooms and the gas-fired boiler that produces hot water.

But the bigger problem was the discovery of major deficiencies to the building. The roof needed to be replaced, as did the plumbing, kitchen, electrical transformer, fire-safety sprinkler system and outdoor pool.

Another pricey additional project involved the standalone 1,800-seat expo hall. To make it more appealing, its windows, roof, siding, concessions area, floor and bathrooms were replaced and a kitchen installed.

The majority of the renovations throughout the entire property were done by local contractors, Vakil noted.

Vakil credited the positive attitude and diligent work ethic of his team for accomplishing the raft of changes, expected and otherwise. “They all stuck by me,” he said.

Few customers will get excited by essential but out-of-sight construction features like new plumbing, of course.

But there will be plenty of visible improvements as well.

To anyone who remembers the Lancaster Host’s look, the difference is striking as soon as you walk in the main entrance.

Guests entering the sleek lobby will travel past the Starbucks Lounge, a coffee bar with a fireplace and big-screen TV. The menu will include pastries, salads and sandwiches.

Next to the lounge will be the Public Greens bar, restaurant and cafe, with 200 seats. Its name is a play on its organic, farm-to-table, locally sourced menu and the Wyndham’s 18-hole golf course, where all 48 bunkers were rebuilt and sprinkler system rebuilt.

Guests also will see sweeping upgrades to the guest rooms.

Besides the refrigerators, all have gotten a new contemporary decor, their own digitally controlled air conditioning and heating units, as well as flat-screen TVs, wall safes, back-lit mirrors, a magnifying makeup mirror and free wireless internet service.

Twenty-four of the rooms are Wyndham Stay Well rooms, which have air purifiers, dawn-simulator wakeup lighting, memory-foam mattresses and an aroma-therapy unit. The rooms are cleaned with hypoallergenic products and a UV wand.

With all the improvements comes a higher price for rooms, Vakil acknowledged. Past rates were low, reflecting the condition of the property, he said, while new rates are competitive with comparable resorts.

Rates for a weekday stay in May start at $135, according to the Wyndham website. while a Friday or Saturday stay that month starts at $152.

As summer ended and fall began, hotelier Kalpesh Vakil thought the $28 million investment he and his business partner had made on Lincoln High…