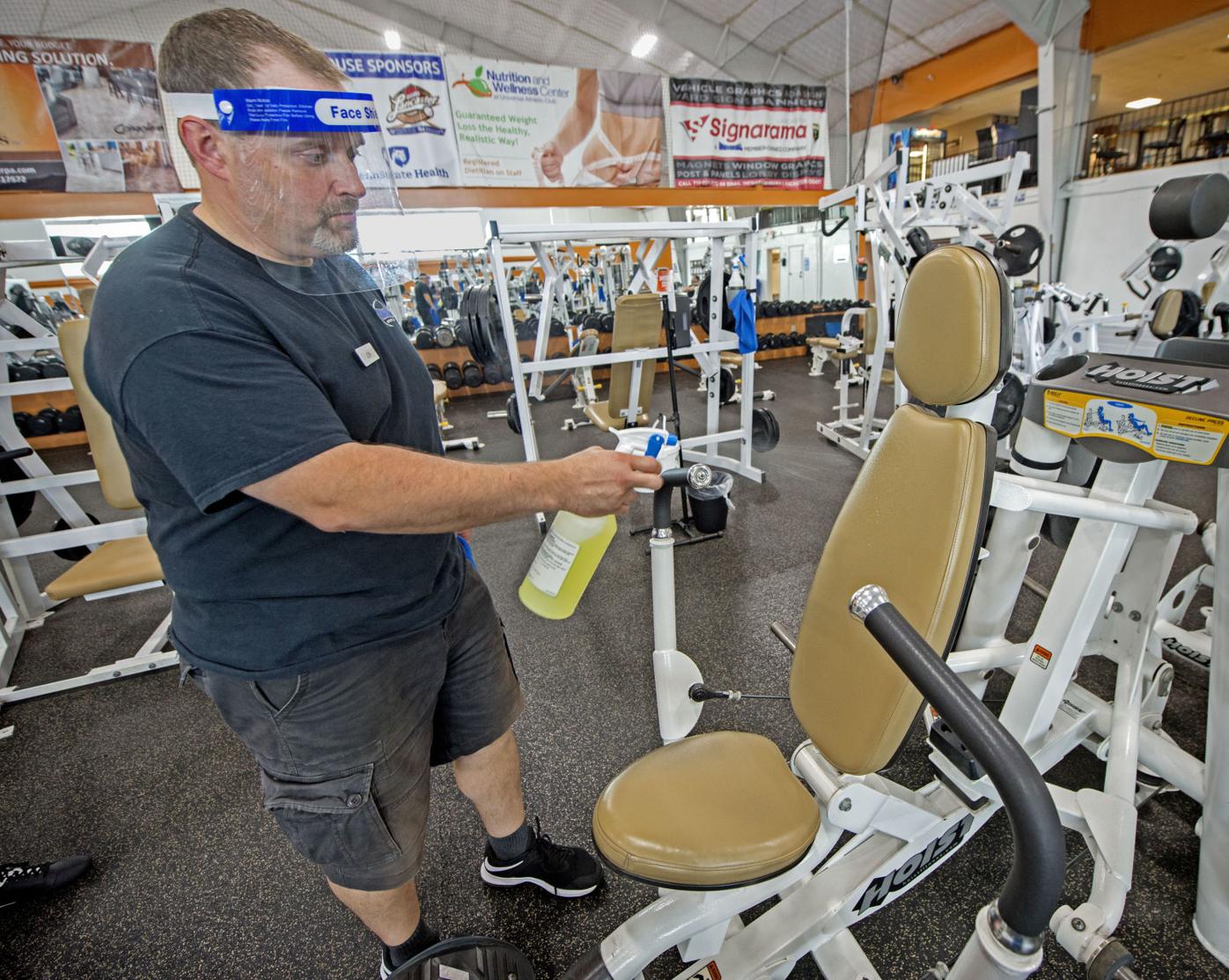 Jon Seibel, director of maintenance at Universal Athletic Club, 2323 Oregon Pike in Manheim Township, sprays a workout machine with peroxide multi-surface cleaner and disinfectant on Friday, June 19, 2020. Spray bottles of the cleaner have been placed at machines throughout the club for members to clean the machines after use. A cleaning team will also be disinfecting equipment in the club. 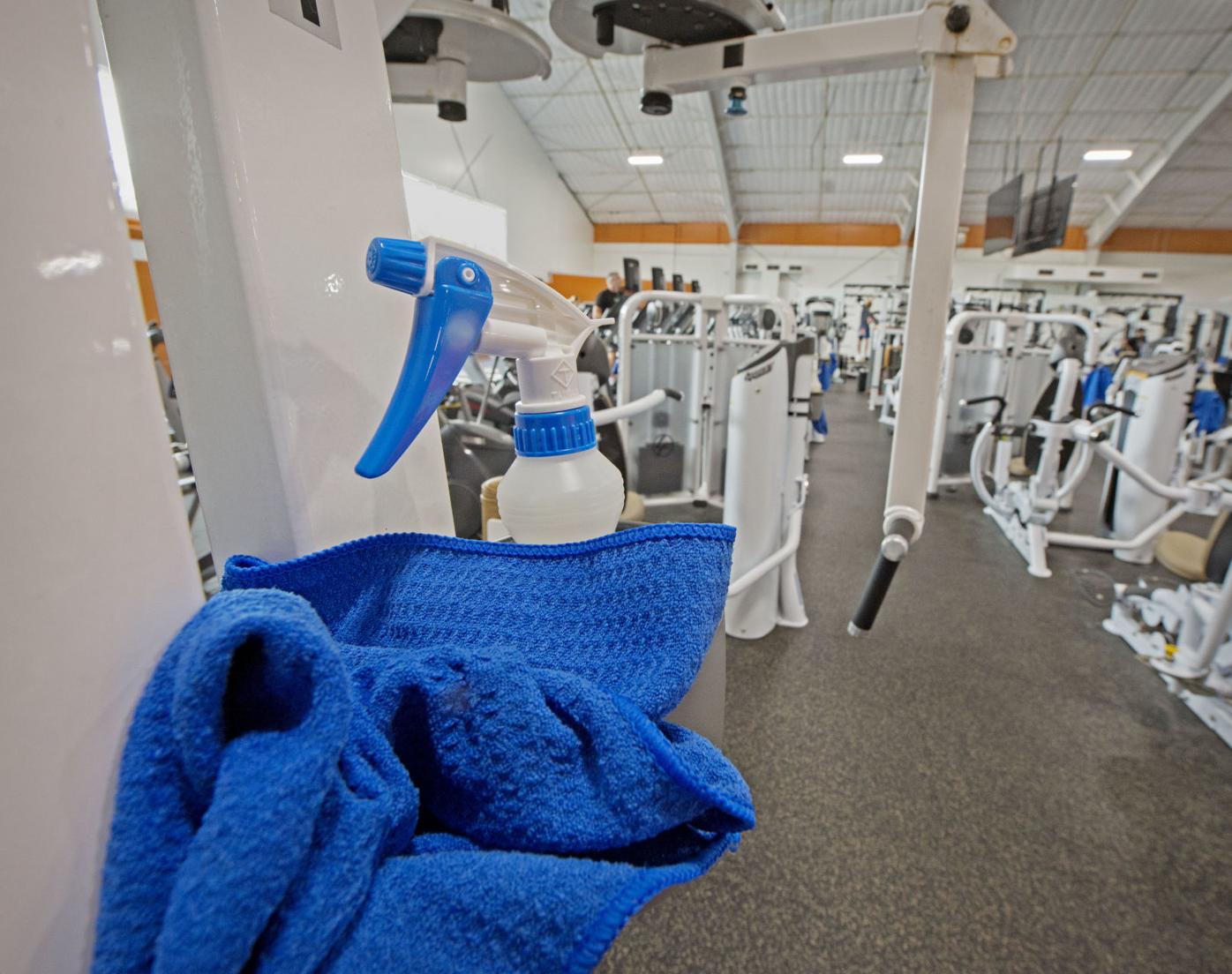 Universal Athletic Club, 2323 Oregon Pike in Manheim Township, has placed spray bottles of peroxide multi-surface cleaner and disinfectant at exercise machines in the club and other locations, Friday, Juen 19, 2020. Hand sanitizer stations are also throughout the club as Lancaster County businesses prepare to move to the green zone. 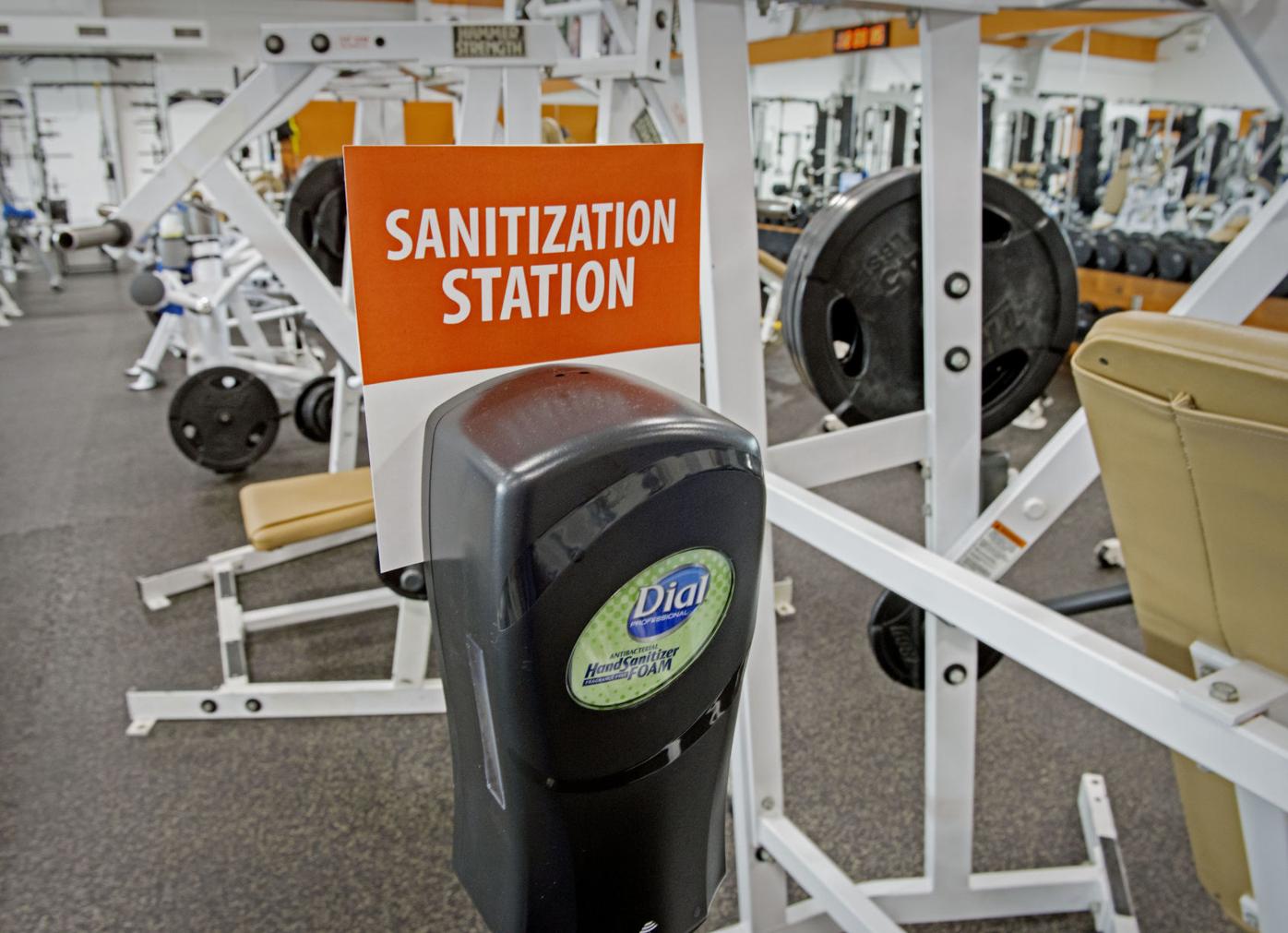 Jon Seibel, director of maintenance at Universal Athletic Club, 2323 Oregon Pike in Manheim Township, sprays a workout machine with peroxide multi-surface cleaner and disinfectant on Friday, June 19, 2020. Spray bottles of the cleaner have been placed at machines throughout the club for members to clean the machines after use. A cleaning team will also be disinfecting equipment in the club.

Universal Athletic Club, 2323 Oregon Pike in Manheim Township, has placed spray bottles of peroxide multi-surface cleaner and disinfectant at exercise machines in the club and other locations, Friday, Juen 19, 2020. Hand sanitizer stations are also throughout the club as Lancaster County businesses prepare to move to the green zone.

For the past three months, salon co-owner Cathy Wagner and her stylists have been calling each client with an upcoming appointment to say the visit is canceled indefinitely.

Friday, though, the message from the Trans4mation Salon changed to, “When can you come in?”

Gov. Tom Wolf announced he’s loosening the pandemic-confining limits on business activities in Lancaster County, upgrading the county’s status from the yellow protocol to green, which allows many types of shuttered businesses to resume operations, albeit with tight restrictions.

No 2020 season for Barnstormers, Atlantic League; War of the Roses series possible

“Our clients are ecstatic,” said Wagner, who’s owned the 14 S. West End Ave. business with her husband Ron for 12 years.

While Wagner, her eight stylists and two appointment coordinators were busy on Friday calling clients to reschedule visits lost during the pandemic, once word got out about Wolf’s decision, calls began pouring in too.

Lyndsay Gall, general manager of the Park City Diner on Plaza Boulevard, had a similar reaction to the change, which lets restaurants and bars provide dine-in service, not just takeout, delivery and outdoor dining. (But the diner only offers takeout for now.)

“We can’t wait to get our customers back. It will be nice to see their faces, instead of seeing them pull up in cars,” Gall said.

Susan Petersheim, executive director of Universal Athletic Club on Oregon Pike, was enthusiastic about going green as well. “This is great news,” she said. “It feels like forever (since the fitness center was open). Sometimes it feels like a dream.”

Tom Baldrige, president and CEO of the Lancaster Chamber, called the last three months “an excruciating journey.” While the upgrade to green is a tribute to the resilience, innovation and effort of the county business community, he noted not every person or business made it through.

“...(F)inancial hardship still abounds for businesses and individuals alike (making) it clear that 'green' doesn’t immediately equate to ‘all is well.’ There is much work to be done,” he said, which will include continuing to follow safety precautions.

Another industry that stands to benefit from the green status is the tourism industry, a cornerstone of the county economy, though it too faces major restrictions that will prevent a full recovery (among other factors).

When Nook Sports is hurting, nearby hotels and other businesses feel its pain

Green, though, is no panacea. Restrictions on businesses are significant, narrowing the opportunity for businesses to generate badly needed revenue after months of bringing in zero, or close to it.

Large gatherings of more than 250 people are prohibited. Restaurants and bars can reopen dine-in areas but are limited to 50% capacity, as are salons, gyms, theaters, shopping malls and other facilities. Businesses also must enforce social distancing, even if it cuts occupancy below that 50%. Employees and customers are required to wear masks (with a few exceptions). Frequent disinfecting also mandatory too.

Messages to spokesmen for Dutch Wonderland, Park City Center and Sight & Sound Theatres for comment on going green were not immediately returned.

Gall said the challenges facing the diner as it restarts its dine-in service are formidable. It needs to restock its food and supplies, but is unsure how much to buy, since it has no idea how much business it will do. But obviously, the 190-seat dinner won’t be packed like the old days.

“It’s crazy,” she said. “We have no idea what to prepare for, whether we’ll be busy or slow. Hopefully, over time, as people get comfortable, we’ll get back to something close to normal.”

The dinner has been operating with 25 of its 75 employees, said Gall. Once the county goes green, the diner will give some hours to all its employees. How many hours depends on how busy the diner is.

Universal Athletic Club has been prepping its 14,000 members and its 120,000-square-foot facility for the green phase for weeks.

Presenting exercise classes via Zoom and, in the past week, bringing members back by appointment have been part of Universal’s effort to keep in touch with its members during the shutdown.

“We worked super-duper hard to keep our members engaged, because we want them to come back. And the members have been super appreciative,” said Petersheim.

However, for members who are reluctant to return to the building, Universal will continue offering its online classes, she said.

Millersville University will reopen in the fall with some courses in-person, others online

Since the building was unused during the shutdown, Universal took advantage of the empty status to paint the pool, re-grout the pool deck and deep-clean equipment. As Petersheim quipped, you can’t turn equipment upside down for a thorough cleaning when the facility is being used.

During the shutdown, Universal has employed about 30 of its 200-person workforce. How many more it can bring back to work will depend on the number of members who return, said Petersheim.

Trans4mation is bringing back all of its 10 employees, in part to handle what Wagner considers “excessive” safety precautions ordered by the state Board of Cosmetology.

These include installing dividers between styling stations and between shampoo bowls, having clients wait outside the salon for their appointments, posting on a whiteboard in the bathroom the last time it was cleaned and disinfecting stations between clients.

“They’re not making it easy,” said Wagner. “(Appointments) are going to take longer, and we’ll need to close an hour earlier to make sure the salon is spotless the next day.”

Even with the extensive precautions, Wagner expects some clients to be wary of returning to the salon.

“The girls know they’ll have to reassure some people that they’ll be safe. Other people aren’t worried about it at all,” she said. “Some people are so over COVID-19 -- myself included.”

Nonetheless, Wagner said she’ll probably ask clients to sign a waiver promising not to sue the salon if they contract COVID-19.

For more information on the state’s rules under green and yellow, visit https://www.governor.pa.gov/covid-19/business-faq/.

'Still in disbelief': A dad learns to raise 6-year-old girls after losing his wife to COVID-19

As of Thursday, there were more than 2.1 million cases of COVID-19 and more than 118,000 deaths from the illness in the United States, accordi…

'I've already contacted my hairdresser for a pedicure': Readers share their plans once Lancaster County moves to 'green' phase

What should you expect when Lancaster County enters the 'green phase' on Friday? York County offers a few clues

As Lancaster County enters the “green phase” of a COVID-19 reopening plan Friday, some residents may feel a sense of added freedom.

Lancaster County is moving to the 'green' phase today; here's what to expect

Lancaster County will officially move to the "green" phase of Gov. Tom Wolf's reopening plan this morning, just over 100 days since the first …