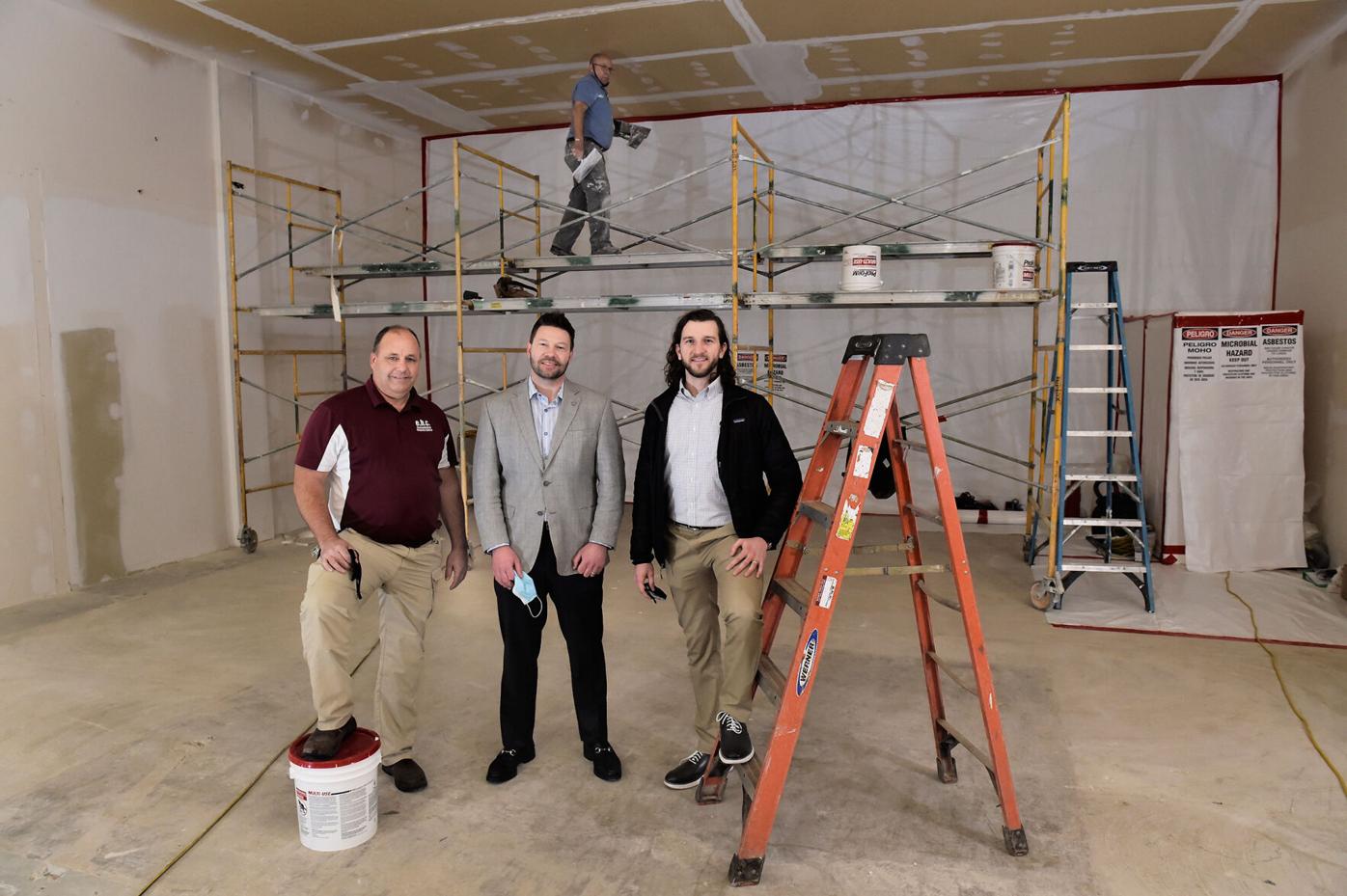 As workers of EHC Associates perform mold remediation on the other side of the plastic, John Hartman, Ted Gallagher and Nate Eisenberg are pictured in the back portion of a space where drywall is being finished on Tuesday, January 26, 2021. 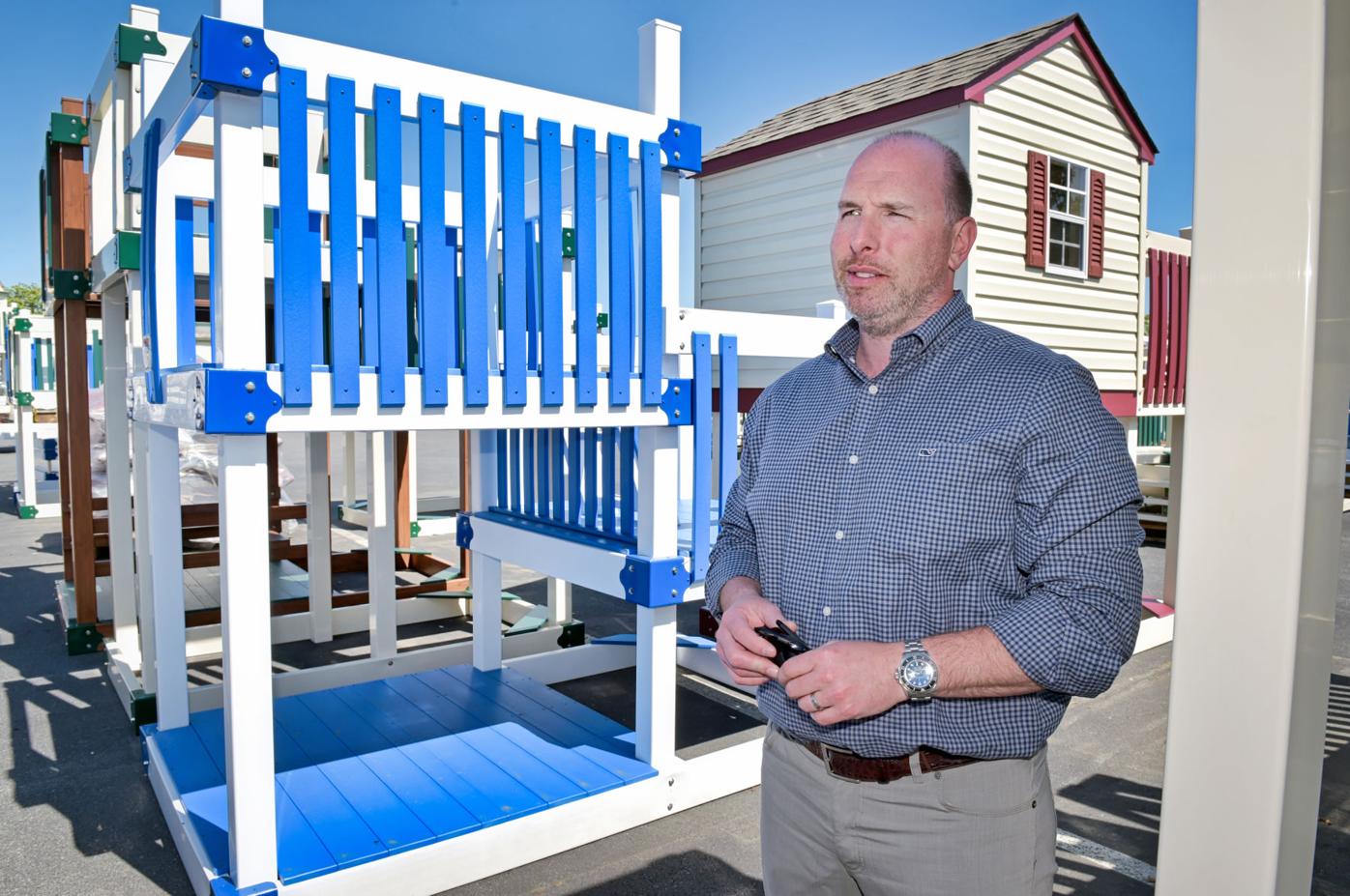 Swing Kingdom’s origin story reads like an archetypal Lancaster County tale of an entrepreneur who finds early success that takes him and his business off the farm, then continues to grow through the persistent application of effort and ingenuity.

Amos Glick was 18 years old when he started building sheds on his Amish family’s farm in Leola. But, with many other local shed markers, Glick decided in 2000 to start making backyard swingsets with vinyl components. By the spring of 2018, Glick had 70 employees, was making 10,000 swingsets a year and had his own company, Atlas Molding, to produce parts.

Then Glick did something atypical for a Lancaster County entrepreneur: He sold most of his company to PennSpring Capital, a Lancaster-based private equity firm run by former New York City investment banker Lou Castelli.

Less than two years later, the businesses were sold again, after a frenetic 19 months during which sales tripled.

The dramatic growth and successful sale of Swing Kingdom and Atlas are the realization of the untapped potential that initially prompted the deal, and which has encouraged PennSpring to seek more tie-ups with local firms. Last month, PennSpring bought majority ownership in EHC Associates, a Leola-based environmental services company.

The twin deals by a relatively new, local dealmaker offer intriguing possibilities for local companies to supercharge growth with a private equity firm uniquely focused on Lancaster County. And since PennSpring’s brief ownership of Swing Kingdom and Atlas Molding included the purchase of real estate and a jump in employment, it confounds the image of private equity firms only wanting to cost-cut their way to quick profits.

“In my opinion, what Lou did with Swing Kingdom and Atlas is he grew new value,” said Will Mullin, vice president of Summit Advisory, a Lancaster investment banking company. “He did some things to make them stronger, healthier companies that are going to employ more people. I like his model.”

A native of Queens, New York, Castelli grew up in North Jersey and earned an MBA from Cornell University. He spent 15 years living and working as an investment banker in New York City, specializing in coordinating the sale of closely held companies.

Wanting to leave the New York City metropolitan area, Castelli moved six years ago to Lancaster, where his wife’s family has deep roots and where he founded PennSpring, which has made six majority investments since 2018 and has become increasingly focused on Lancaster County companies.

With Swing Kingdom and Atlas Molding, Castelli said he saw potential in selling the modular playground equipment to municipalities and schools, jobs that could be more lucrative than a homeowner getting something for their backyard.

“We had grown outside our comfort zone in our culture, and we were limited with our education levels … To take it to another level we had to bring a smart guru in like Lou,” Glick told LNP in June 2018.

Under PennSpring, Castelli said the companies were able to secure several “six-figure” jobs with municipalities in the Carolinas while adding two daily shifts to production at Atlas Molding, turning the making of vinyl swingset components into a round-the-clock operation.

“We grew the company a lot quicker than we thought,” Castelli said.

In January, the companies were sold for an undisclosed price to Country Lane Gazebos of New Holland, a local firm Castelli said was a better cultural fit than some bigger private equity firms that expressed interest.

“In the end, we had a great outcome,” Castelli said. “I think this is an example of how two people from different backgrounds can come together and create a lot of business success.”

The sale to Country Lane Gazebo included the 36 Glenbrook Road Swing Kingdom headquarters for $2.4 million and the Atlas Molding plant at 304 E. Main St. for $3.9 million. Penn Spring had bought the properties in May 2018 for $1.7 million and $2.5 million, respectively.

“We’re also a real estate investor where we’re buying the property under these businesses where a lot of financial buyers don’t want to own the property,” he said. “We’re just big believers in Lancaster County dirt.”

Neither Glick nor Country Lane Gazebos owner Sam Stoltzfus responded to request for comment for this story.

While Glick was the atypical entrepreneur willing to give up control to see his business expand, Castelli is also not your typical private equity investor.

Mullin, of Summit Advisory in Lancaster, said he’s not aware of another private firm like PennSpring Capital that is based in Lancaster and is focused on doing deals with local companies.

Mullin, who knows of Castelli but was not involved in any of his deals, said Castelli’s approach of “buy and build” is unlike the cost-cutting tactic of some private equity investors. And it can result in dramatic growth if an owner is willing to allow a deal to happen.

And Mullin said he thinks there are plenty of other companies in the area that would be attractive to PennSpring, which says it wants to be the region’s private equity group of choice.

“It’s fine for me to say I did it in Manhattan or did it with this or that company, but now that I’ve done it with a company that people can touch and feel, I think it’s going to open up the market,” Castelli said.

While Mullin agrees there could be many strong partners for Castelli, he knows many family-owned local companies have their own reason for being leery of private equity firms.

“Lots of companies have a succession plan, and they’re not interesting in selling to private equity,” Mullin said. “They’re hanging on to their company for generations -- and that’s their plan.”

‘A second bite of the apple’

Founded in 1983 by Bill Gallagher, EHC Associates initially operated as a consulting firm that helped companies manage asbestos cleanup. After Gallagher’s death in 2005, the firm added a contracting division that could do the work that it was recommending.

The firm’s current partners are John Hartman and Bill’s son, Ted Gallagher, who oversee a roughly 55 employees who do asbestos abatement, clean air ducts, remove lead paint and get rid of mold.

The sale of a majority interest in EHC was finalized Jan. 20. The deal included the sale of the company’s headquarters at 2502 Horseshoe Road, which PennSpring bought for $895,000. Other financial terms were not disclosed.

“The power behind us now is a little more than we’ve ever had, so we’re excited,” Hartman said.

Like Swing Kingdom, Castelli says EHC Associates has strong management, a large market of potential customers, and PennSpring was able to identify some ways to unleash growth. Plus, part of the pitch was that the owners will share in any success.

“We can provide the second bite of the apple,” Castelli said. “You don’t need to retire, you could work with the company for many years, keeping a minority ownership.”

Castelli said PennSpring plans to create a robust digital marketing effort for EHC that will capture new customer leads, especially ones for the more lucrative asbestos removal jobs. And, the company will look to get bigger by acquiring other firms.

It’s part of the pitch that convinced Gallagher.

“Really it came down to stability for our employees,” Gallagher said. “And partnering with a private equity company that would actually keep our culture. That was the most important thing. We talked to a lot of different people. PennSpring is local, they understand our culture and they don’t want to change our culture.”

Lancaster-based private equity firm PennSpring Capital has announced the purchase for an undisclosed price of Norton Jackson & Company, a …