FILE - The logo for Kellogg's appears above a trading post on the floor of the New York Stock Exchange, Tuesday, Oct. 29, 2019. Kellogg's announced Tuesday, June 21, 2022 that it is splitting into three companies: a cereal maker, a snack maker and a plant-based food company. Kellogg's, whose brands include Eggo waffles, Rice Krispies cereal and MorningStar Farms vegetarian products, said the proposed spinoffs of the yet to be named cereal and plant-based companies are expected to be completed by the end of 2023. 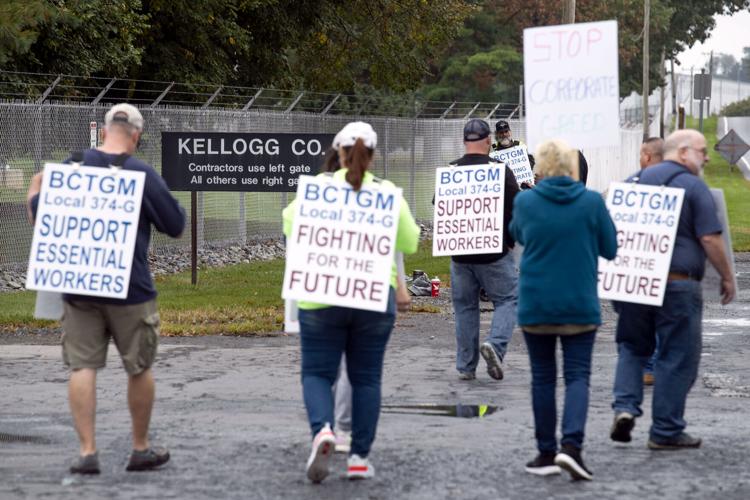 Union workers at the Kellogg plant on State Road in East Hempfield Township walk the picket line on the first day of their strike, Tuesday, October 5, 2021. 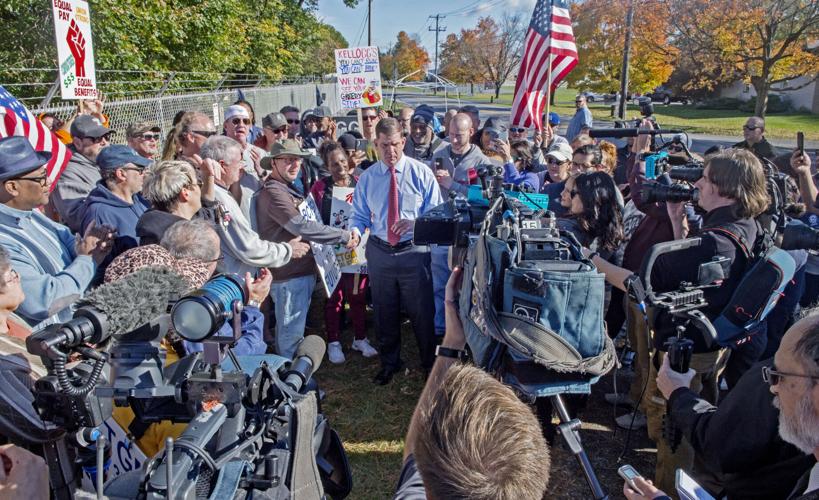 FILE - The logo for Kellogg's appears above a trading post on the floor of the New York Stock Exchange, Tuesday, Oct. 29, 2019. Kellogg's announced Tuesday, June 21, 2022 that it is splitting into three companies: a cereal maker, a snack maker and a plant-based food company. Kellogg's, whose brands include Eggo waffles, Rice Krispies cereal and MorningStar Farms vegetarian products, said the proposed spinoffs of the yet to be named cereal and plant-based companies are expected to be completed by the end of 2023.

Union workers at the Kellogg plant on State Road in East Hempfield Township walk the picket line on the first day of their strike, Tuesday, October 5, 2021.

It’s too early to tell exactly what Kellogg’s plan to split into three companies will mean to the more than 380 workers at its State Road cereal plant in East Hempfield Township but the international maker of snacks and cereal says it is not deprioritizing its cereal segment.

The State Road plant, which makes iconic brands such as Frosted Flakes and Rice Krispies, will become part of a new company dubbed for now “North American Cereal Co.” as part of a split announced by Kellogg Co. on Tuesday. The other businesses will be an international snack company and a plant-based food business. In addition to cereals and snacks like Cheez-Its, Kellogg owns the plant-protein brand, Morningstar Farms.

Kellogg Co. announced it would divide the company, which had $14.2 billion in net sales in 2021, into three public companies resulting in tax-free distributions of North America Cereal Co. and Plant Co. shares to Kellogg Co. shareowners. The split does not require shareowner approval.

The company said the split would be completed by the end of 2023. Naming the companies will be part of that process. It is not clear what that will mean for the 380 union workers at its East Hempfield Township cereal plant.

The split, which was approved by the Kellogg’s board of directors, will happen sequentially, with the cereal segment likely being spun off first, the company said. The company needs 18 months to carve out financials for each entity, have the proposal reviewed by the Securities and Exchange Commission, and obtain tax rulings and tax opinions. The company intends to announce a CEO for the North American Cereal Co. in the first quarter of 2023.

“The company expects to provide further updates throughout the process, as appropriate,” it told workers. “Until then, for the next 18 months, Kellogg Co. will continue to operate the business as usual.”

It also said it did not envision any changes to its products or real estate.

“The transactions will not result in any office moves or closures, and our intent is for our current real estate footprint to remain the same,” Kellogg said in a FAQ intended for employees posted at unleashingourpotential.com. The website is supposed to be regularly updated for employees.

The State Road plant workers are represented by the Bakery, Confectionery, Tobacco Workers and Grain Millers’ International Local 374. Neither local union or the company’s press office responded to emails or phone messages Tuesday.

The company also leases a distribution center across from the manufacturing plant. It is unclear how many people are employed there.

The union ratified a contract in December after a hard-fought 11-week strike that brought U.S. Secretary of Labor Marty Walsh to Lancaster County to walk with workers. The strike ended after the company promised higher wages, enhanced benefits and a quicker path to permanent employment for its temporary workers.

In reports to investors, Kellogg blamed the strike and a fire in Lancaster County for a 10% net sales decrease last year for North America cereal as it reestablished production and inventory levels after the strike. It said North America operating profit decreased 11% in part due to the residual impact of the fire and strike.

Cahillane is set to become CEO of the spun off global snacking company.

The snack division, which makes Cheez-Its, Pringles and Pop-Tarts, among other brands, generated $11.4 billion net sales in 2021 while cereal net sales were $2.4 billion and  plant-based net sales totaled around $340 million.

U.S. cereal sales have been waning for years as consumers moved to more portable products, like energy bars, the Associated Press reported. They saw a brief spike during pandemic lockdowns, when more people sat down for breakfast at home. But sales fell again last year.

Kellogg has been sharpening its focus on snacks for years, the AP reported. In 2019, the company sold its cookie, pie crust, ice cream cone and fruit business to the Ferraro Group.

Such splits are more rare for food producers, according to the AP. The last major split in the sector was in 2012, when Kraft split to create Mondelez. Mondelez made its own big play in the snack business on Monday, when it announced it will acquire Clif Bar & Co., a major energy bar company. The $2.9 billion deal is expected to close in the third quarter.

This is a particularly perilous time in the food industry due to rising costs, both for labor and for material, the AP said. Russia’s invasion of Ukraine has pushed grain prices higher and this month, the U.S. reported that inflation is hitting four-decade highs.

Reuters reported that “companies often split in an attempt to shed a so-called conglomerate discount, where the valuation is lower than the ‘sum of the parts’ if the component businesses are run separately.”

Kellogg Co. said in a FAQ on its employee site (unleashingourpotential.com) it was not deprioritizing cereal or trying to unload an underperforming segment.

The company said the split will enable it to have more agility in responding to markets.

“We are making this decision based on what we believe is in the best long-term interest for the North American cereal business as well as the rest of the portfolio.”

Reuters reported “the decision by Kellogg to split follows similar announcements by global conglomerates such as Johnson & Johnson and General Electric Co. in the past year and underscores how big companies need to be nimble in their fight for market share. “

Kellogg said it would explore other options for its plant-based business, including a possible sale. U.S. plant-based meat sales have been plateauing in recent months after several years of strong growth.

East Lampeter-Township-based Armstrong Flooring Inc. said this morning it has adjourned negotiations with bidders for its North American assets and the company as a whole.