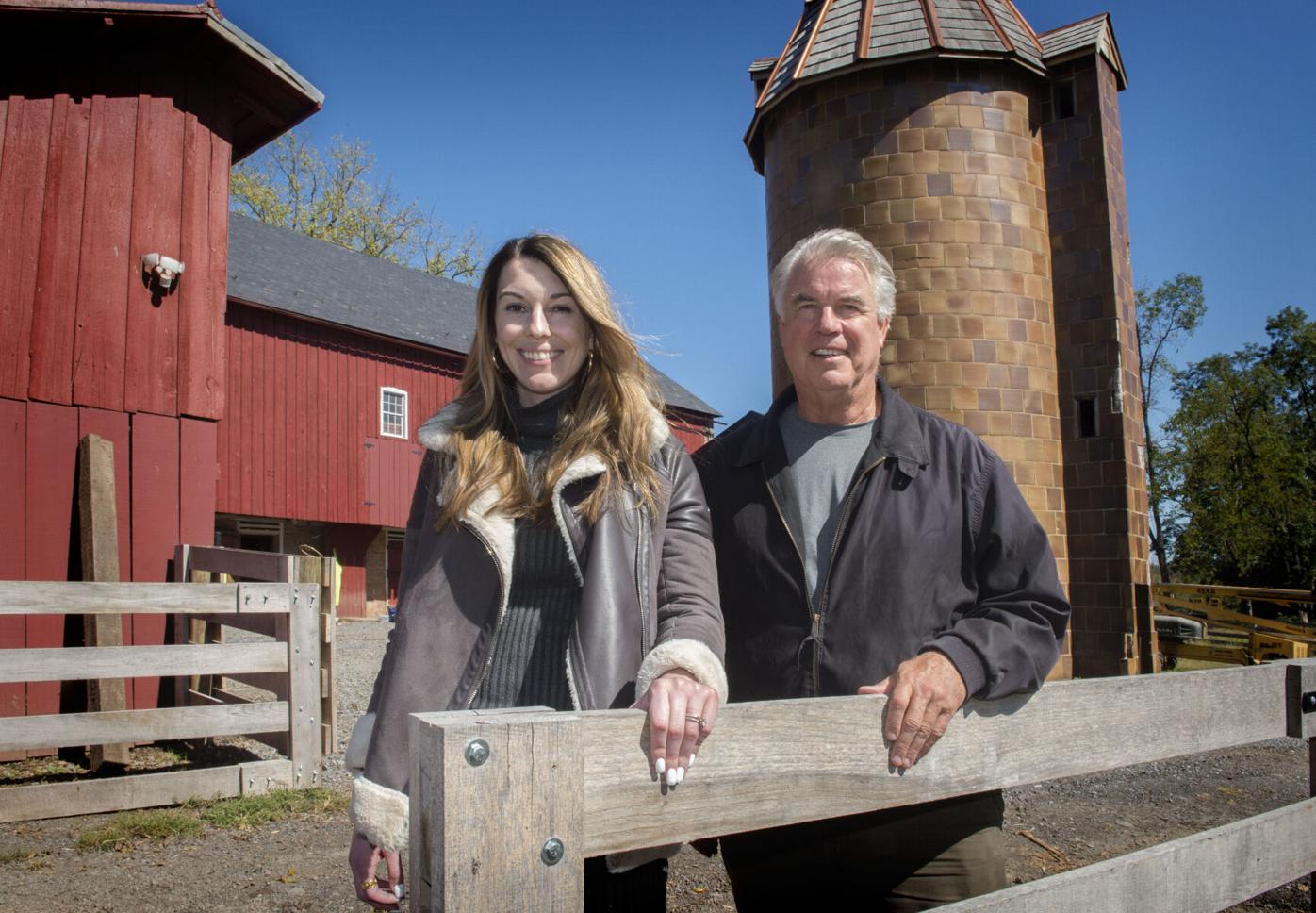 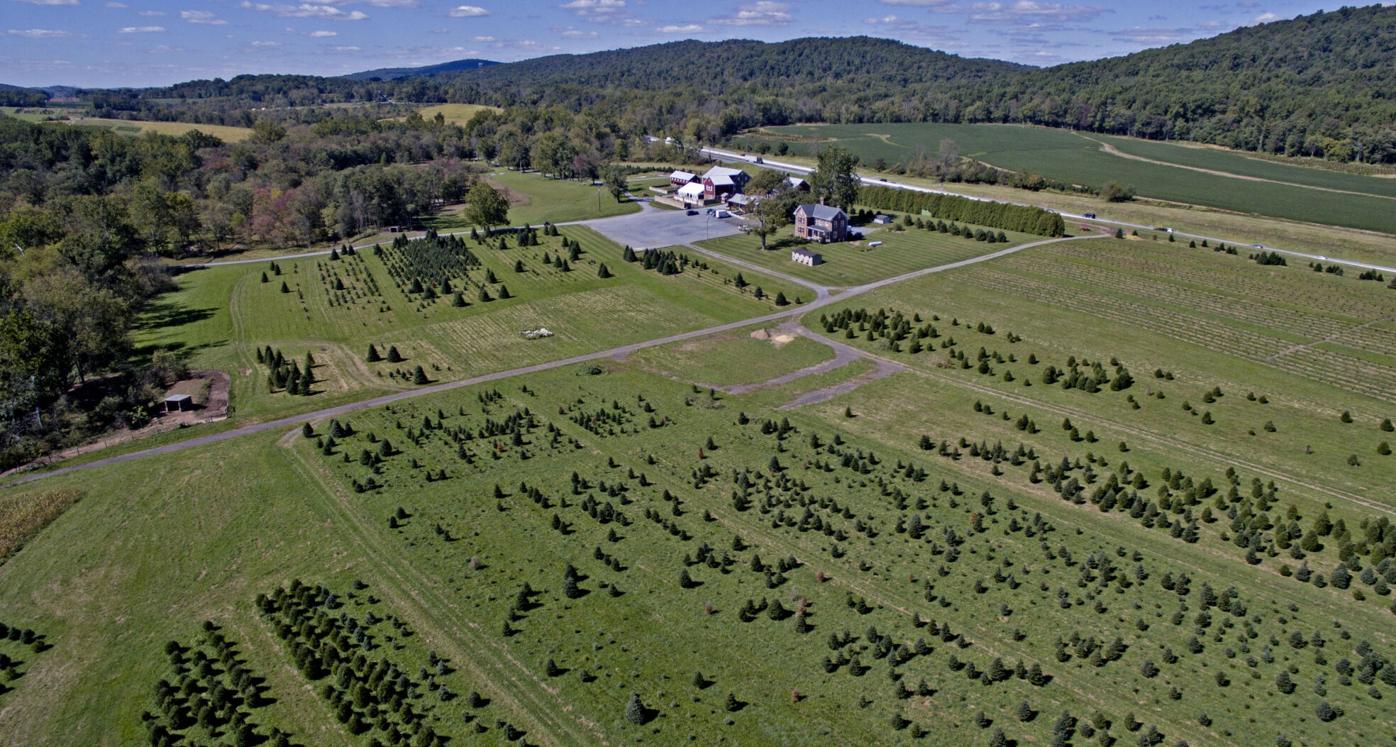 This aerial view shows a portion of the 346-acre property at Elizabeth Farms in Elizabeth Township. 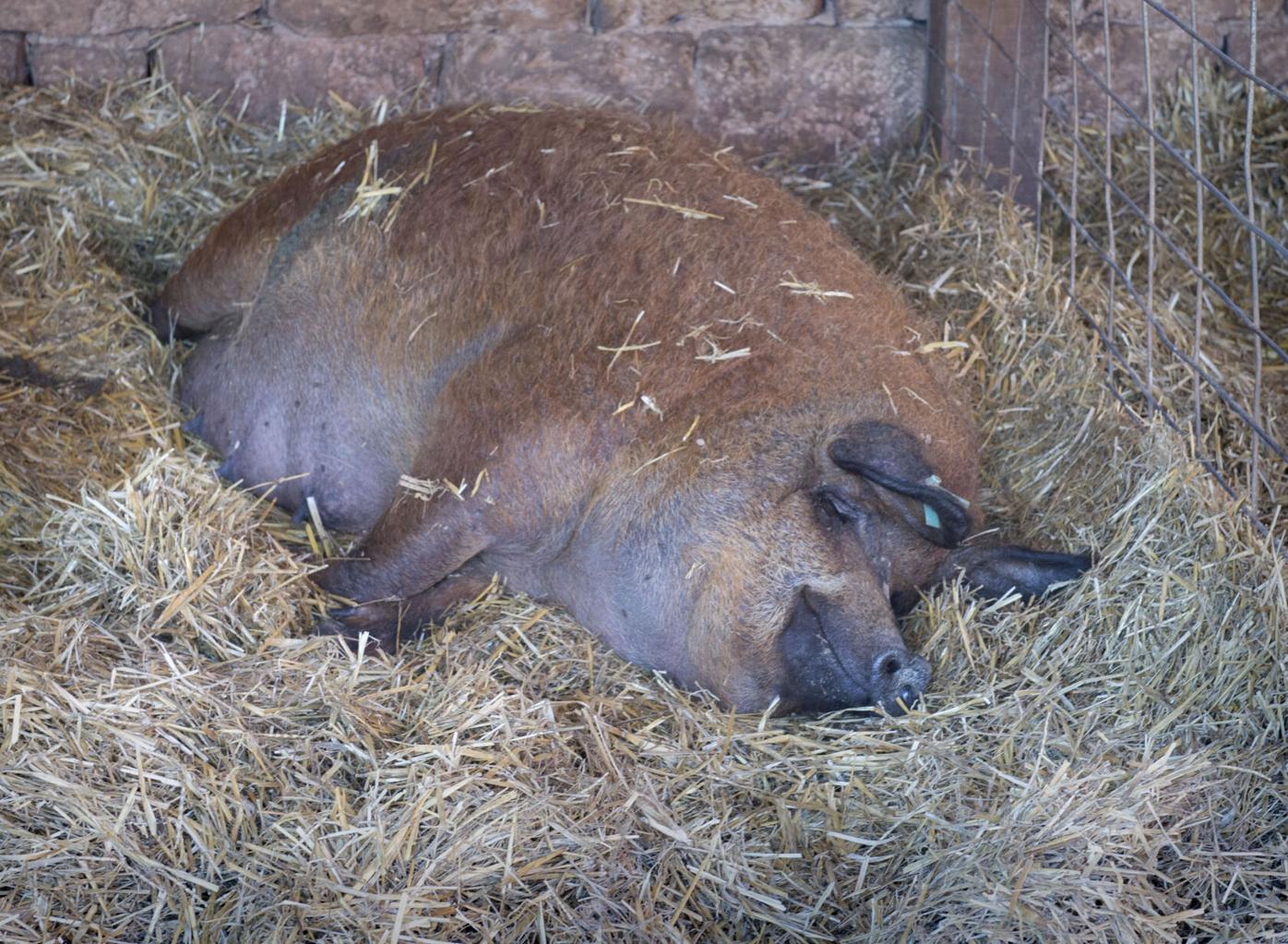 A Mangalitsa pig snoozes in a barn at Elizabeth Farms. 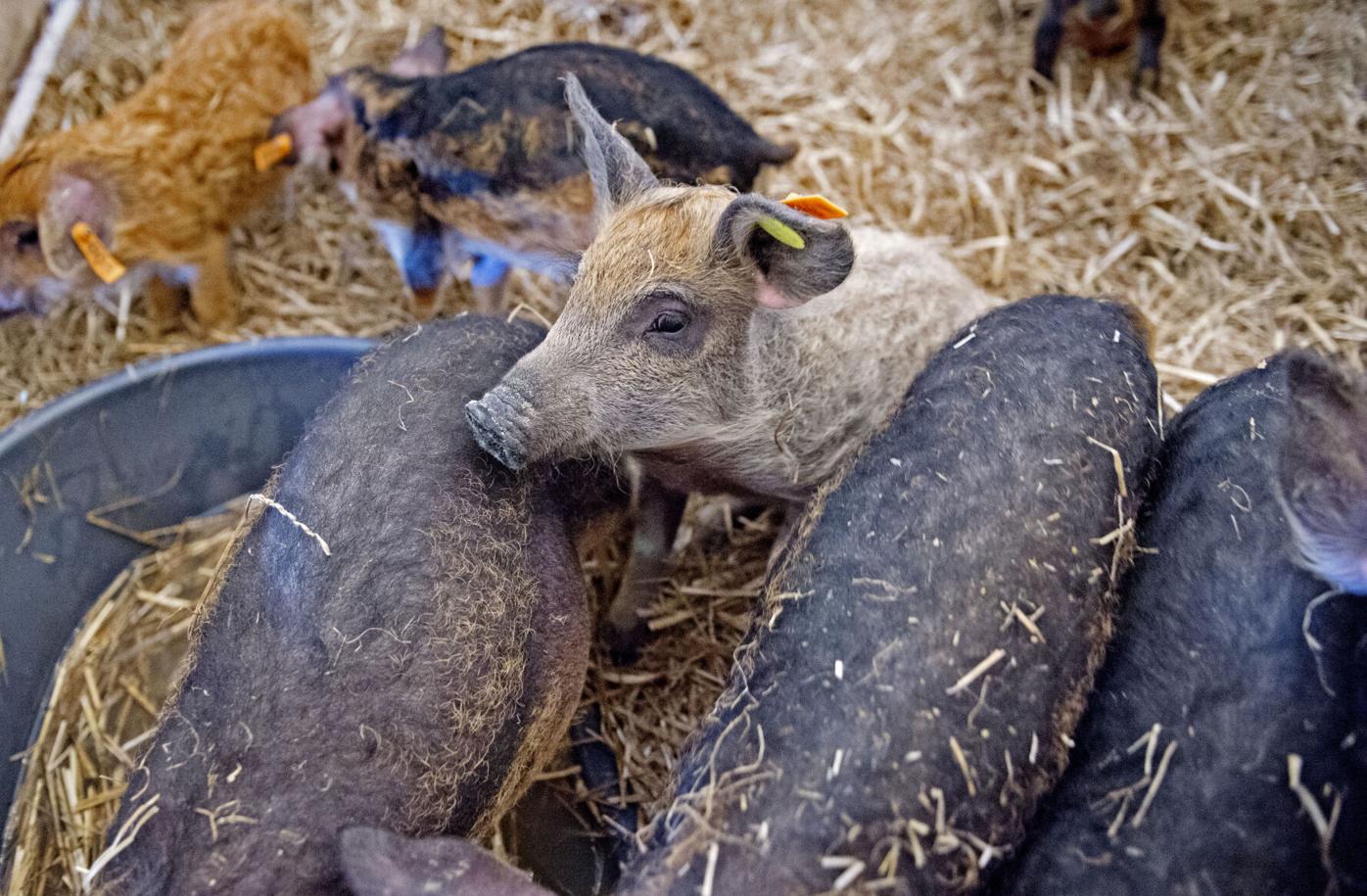 Mangalitsa piglets frolic in a pen inside a barn at Elizabeth Farms. 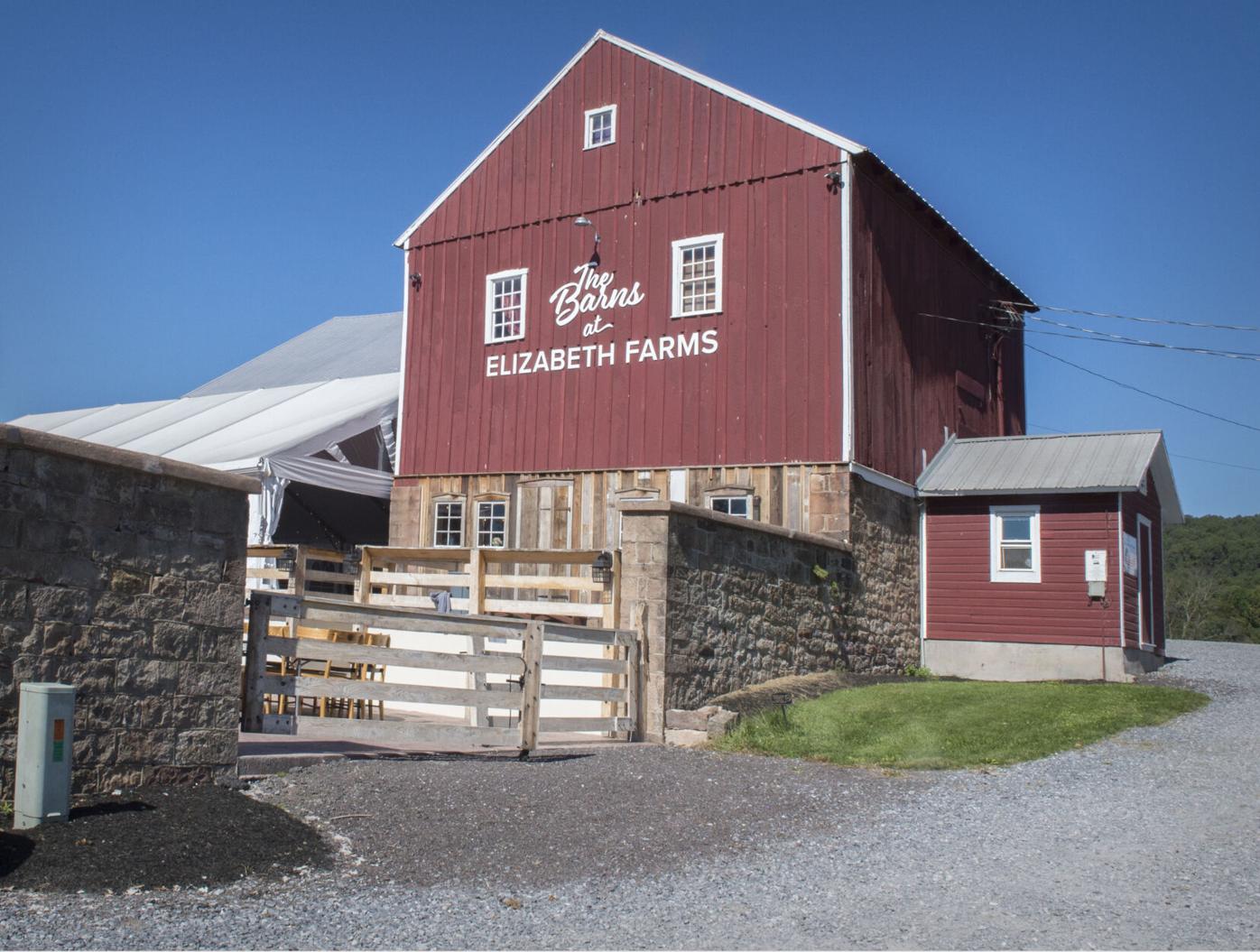 A view of the barns at Elizabeth Farms. 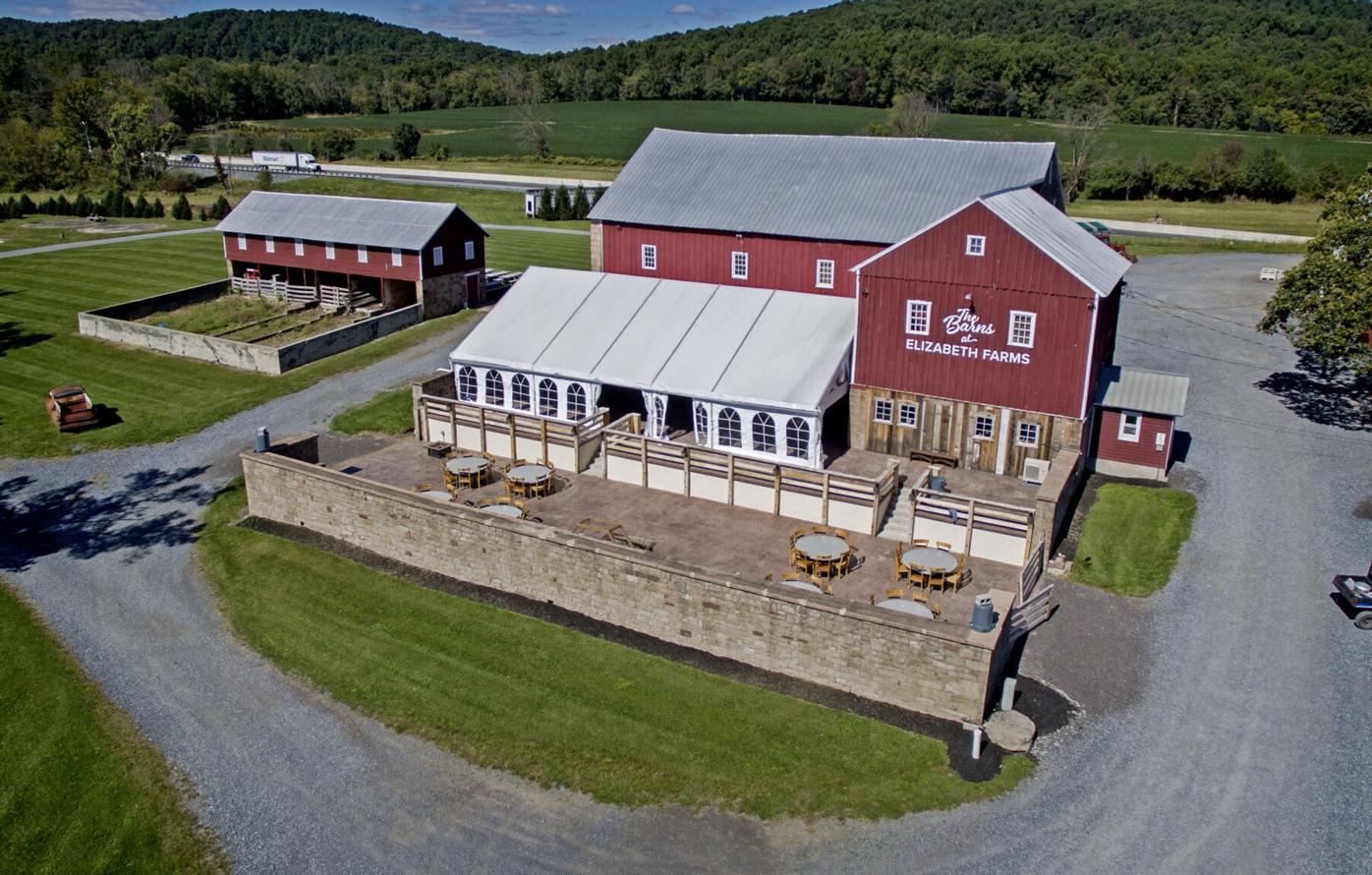 This aerial view shows the barn and event venue at Elizabeth Farms. The Pennsylvania Turnpike runs through the Elizabeth Township property.

Editor's note: An earlier version of this story left out historical context about workers at Elizabeth Farms, which included enslaved people. It has been updated to reflect this.

If you’ve ever taken a horse-drawn wagon ride and picked out a Christmas tree at Elizabeth Farms, chances are you have bumped into Bill Coleman. He has been the gregarious face of – and the brains behind – the popular pick-your-own operation and holiday attraction since 1990. He’s also the eighth-generation heir to the 346-acre Brickerville property that dates back to the American Revolution. Most recently, Coleman added a wedding venue and farm-to-table restaurant into the mix, along with raising heirloom Mangalitsa pigs, prized by chefs for their high ratio of creamy fat. Elizabeth Farms is one of roughly 30 farm-to-table businesses in the country to raise the sought-after pigs, according to Barbara Meyer zu Altenschildesche, an expert in the field.

A former Wall Street stockbroker who turns 69 this month, Coleman has decided to pivot yet again. This time, he’s selling the farm. A public auction on Oct. 29 will determine the fate of this historic property.

Managed by Ephrata auctioneer firm Kline, Kreider & Good, the auction will oversee the sale of three parcels. When asked for an estimated ballpark figure for the parcels, partner Randal V. Kline declined to comment. “The value will be set the day of the auction,” Kline told LNP | LancasterOnline by phone, declining to give further detail.” Kline, who has been in the auction business for 48 years, said that Elizabeth Farms is one of the most unique properties he’s ever prepared for auction.

Coleman sat at a picnic table on his farm eating a Honeycrisp apple last month, reflecting between bites on a storied family legacy that is as old as this country, the land and why he has decided to let it go.

The story of Elizabeth Farms, Coleman said, begins with Robert Coleman, a teenager who left Ireland for the new frontier of colonial Pennsylvania with a few guineas in his pocket and a reputation for exceptional penmanship. He landed in the slave port city of Philadelphia sometime around 1764, and those handwriting skills would, just a few years later, pave the way to Lancaster. (“Back then, that was a skill sort of like being able to write software today,” said Coleman, who has ledgers in his ancestor’s hand.)

The Revolutionary War was yet to come.

Robert Coleman kept the books and did clerical work for well-known ironmasters, including the Grubb brothers of Reading and James Old, who owned Quittapahilla Forge in North Annville, Lebanon County, and Speedwell Forge in Elizabeth Township, where he lived with the Old family. He married Ann Old, the boss’s daughter, in 1773, which also marked the beginning of his illustrious career as an early American industrialist.

By 1776, in a nascent America, Robert Coleman had his eye on the nearby Elizabeth Furnace, which he would eventually own outright after acquiring it from glassmaker Heinrich Wilhelm Stiegel and his partners.

The property known as Elizabeth Farms was first used to grow crops and raise livestock that fed the several hundred workers under Robert Coleman’s employ. According to documents in LancasterHistory’s collection, these workers included enslaved people. LancasterHistory acquired the documents with permission from Bill Coleman in 1998-2000, according to its website.

“The furnaces ran all the time, seven days a week,” said Bill Coleman. “The blast never goes out. They’d work in shifts. This was a wood-fired furnace with acres of wood. They’d go out, and they’d hand-cut a tree. And then they’d burn it in pits to produce charcoal. Then the charcoal would be taken by wagon to the furnace.”

Robert Coleman would go on to acquire 27 more furnaces, including Cornwall Furnace in Lebanon, which became, as the Pennsylvania Historical Marker database describes, the largest, most important iron mine east of the Lake Superior ore deposit. (Cornwall, a designated historic landmark which remains fully intact, was part of the Coleman dynasty until the 1930s.)

His family, which included “13 or 14 children” lived in the Stiegel-Coleman mansion on the Elizabeth Furnace compound, which included a creamery, general store, blacksmith shops and cottages and schoolhouses for workers.

Located just north of the Pennsylvania Turnpike on Furnace Hills Pike, Elizabeth Furnace played host to a who’s who of guests, including the first president of the United States.

“During the Continental Army tenure in the American Revolution, munitions were made here,” Bill Coleman said. “[Robert] Coleman would build cannons and make shot for the Revolutionary War, but he never got paid. In lieu of payment, George Washington sent him Hessian prisoners from the Battle of Trenton. They came to the furnace and they dug what is known as the Hessian Ditch, which brought water from Furnace Run to increase the power of the water that would go over the wheel.

“After the war, Washington and a delegation from Philadelphia came to Elizabeth Furnace to visit Coleman and presented him with a portrait done by Gilbert Stuart (of Washington). That portrait stayed in my family until my father’s generation at which time for some inexplicable reason it was sold.”

Elizabeth Farms remained a production farm until 1850, said Bill Coleman, when the “furnace went out of blast and technological advances made this furnace obsolete.”

For the next 125 years, give or take a few, the Coleman family left the property -- which had amassed to about 1,800 acres -- unoccupied, even when Bill Coleman’s father (Bertram D.) and uncle (Francis I.G.) became joint heirs in 1950.

“They didn’t like each other,” said Bill Coleman. “They had a farm manager to look after things and who would act as a go-between, and the place just lost money every year.”

Bill Coleman’s turn as joint heir would come unexpectedly, after his father’s death in a car accident in 1976.

“The executor of my father’s estate insisted that I sell,” said Coleman. “And I said, I’m going to try and create a business there and make it go. I convinced my uncle of that. And in 1980, we started growing Christmas trees.”

For 10 years, Coleman ran a wholesale Christmas tree operation from Manhattan, with Stauffer’s of Kissel Hill as a major customer. By 1990, they transitioned to retail sales with the horse-drawn wagon rides. Coleman, who had never lived on the property, moved to the Stiegel-Coleman house in the early aughts with his youngest daughter, Virginia. He has remained on the farm full-time since.  (In 2013, Coleman sold the 33-acre estate via public auction for $2 million. The buyers were his cousins, Craig Coleman and Bruce Coleman, who have turned the property into an event venue.)

Bill Coleman made clear that whoever buys the property will not be able to turn it into a shopping mall or subdivision; the land is protected by a 2008 joint easement between the Lancaster Agricultural Preserve Board and the Lancaster Farm Trust.

“It’s preserved farmland, and we have these businesses that are intertwined with the preservation and the land,” he said. “Whoever buys this property,  I’m quite confident, is going to continue to run it as we have.”

When asked why he’s ready to move on (and off the property), Bill Coleman got quiet. He took a few more bites of his apple. He closed his eyes, which got teary.

“I have three daughters,” he said. “I know from experience that owning a piece of real property jointly with your family is not a good thing. And if I did that with my daughters, they would start to quarrel and then they would start to say to themselves, ‘Why did Dad do this?’ I’m thinking that the only person who can sell this properly is the one who put it together.

“When my mom (Patricia Disston Detchon, who served in World War II as a member of the Women Airforce Service Pilots) was dying of leukemia, she knew what her timeline was. Before she died (in 1995), she went upstairs and cleaned her attic. And she did that so her kids wouldn’t have to do it. And that’s what I’m doing with selling the farm. I’m cleaning up my attic.”

Personal inspection available by appointment or via open house today and on Saturdays Oct. 16 and 23 from 1-4 p.m.

Bids will be accepted on-site at Elizabeth Farms, online at klinekreidergood.hibid.com, or by phone at 717-733-1006.

This is an ongoing series with a focus on small independent farms and creative use of farmland. We hope it serves as a reminder that the food …

A look at historic Elizabeth Farms in Lancaster County

11 fall festivals in Lancaster County to go to this October

When it comes to celebrating fall, Lancaster County does it best.

The pigs that live at Elizabeth Farms look nothing like the domestic short-haired pink breeds depicted in cartoons and which represent the majority of supermarket pork chops. These pigs, known as Mangalitsa, sport a distinctively thick coat of curls that is more suggestive of sheep than swine.

Developed in Hungary in 1833, the Mangalitsa’s sole purpose was (and remains) to produce lard, said Barbara Meyer zu Altenschildesche, a Michigan-based breeder and consultant.

The lard, comprising 70% of the animal, is the richest, creamiest and most flavorful of its kind. In 19th century central Europe, said Meyer zu Altenschildesche, lard figured into daily life, not just as a cooking and baking fat, but as a lubricant for leather, tools and machinery. It was even used in soap. Fat fell out of fashion in Europe, and the Mangalitsa nearly went extinct in the early 1990s.

Meyer zu Altenschildesche is married to Wilhelm Kohl, who was among the first breeders to import the Mangalitsa to the United States, beginning in 2007. Earlier this year, the couple founded the Mangalitsa Breed Organization and Registry (mboar.org) to keep track of the last-remaining wooly pig.

Bill Coleman and his business partner Steve Garman brought seven Mangalitsa pigs to Elizabeth Farms in 2019 from a farm in North Dakota. Coleman estimates that at present, there are more than 200 pigs on the property with six pregnant sows in the maternity ward. The pigs live outdoors year round on the property’s woodlands.

Elizabeth Farm slaughters about 15 pigs per month, said Coleman; one pig produces about 120 pounds of saleable meat, which is processed into several cuts, including the lesser-known collar and jowl. The meat is available for retail via online ordering and on-property pickup.

Autumn is filled with ways to celebrate, and learn more about, history in Lancaster County and beyond — from bus trips to museums to in-person…

Ephrata National Bank, an independent community bank for more than a century, wants to make sure it stays that way. And the best way to remain…

Blessings of Hope is asking West Earl Township to broaden the type of facilities allowed on land that’s zoned agricultural, so the nonprofit c…