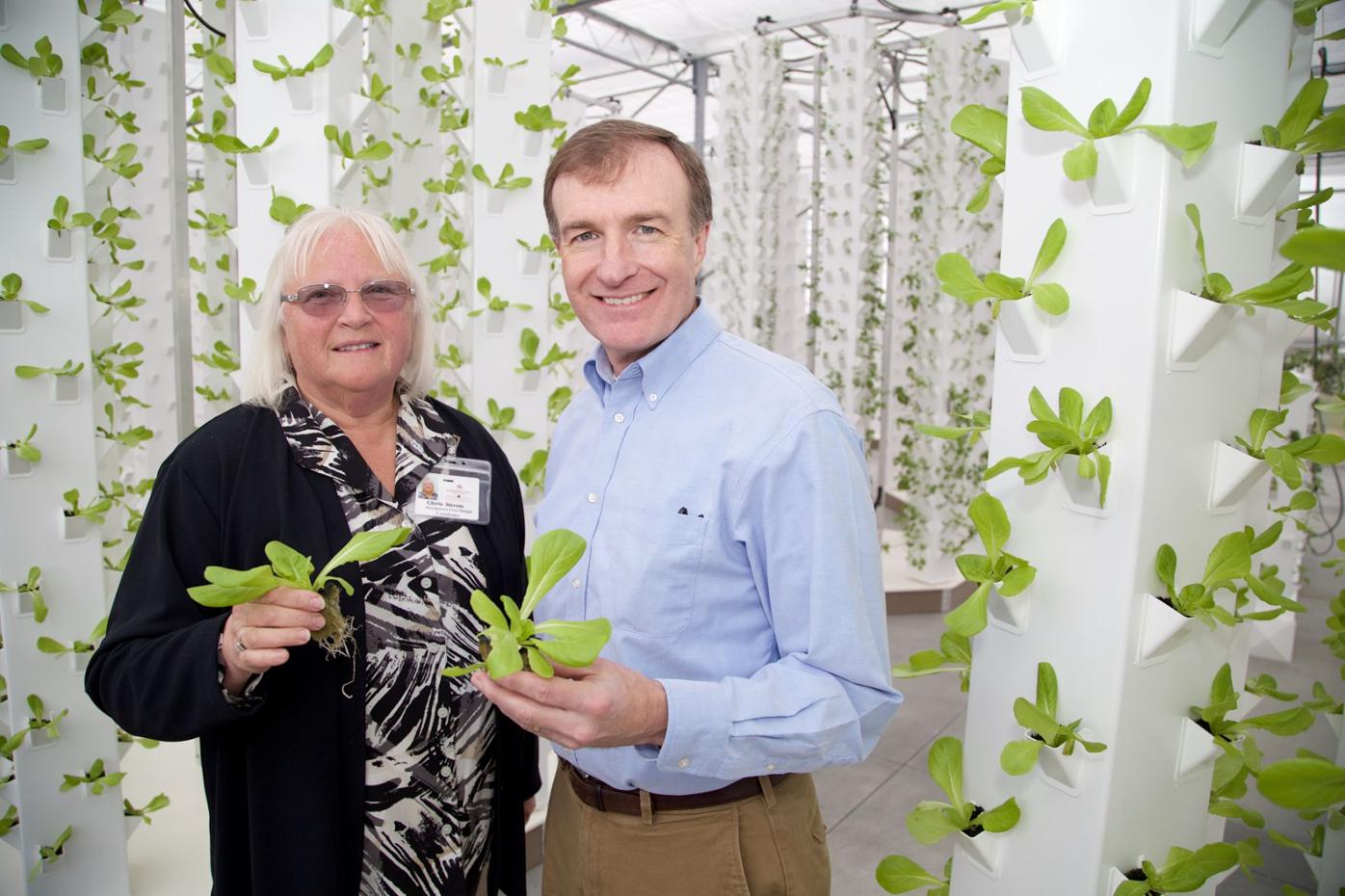 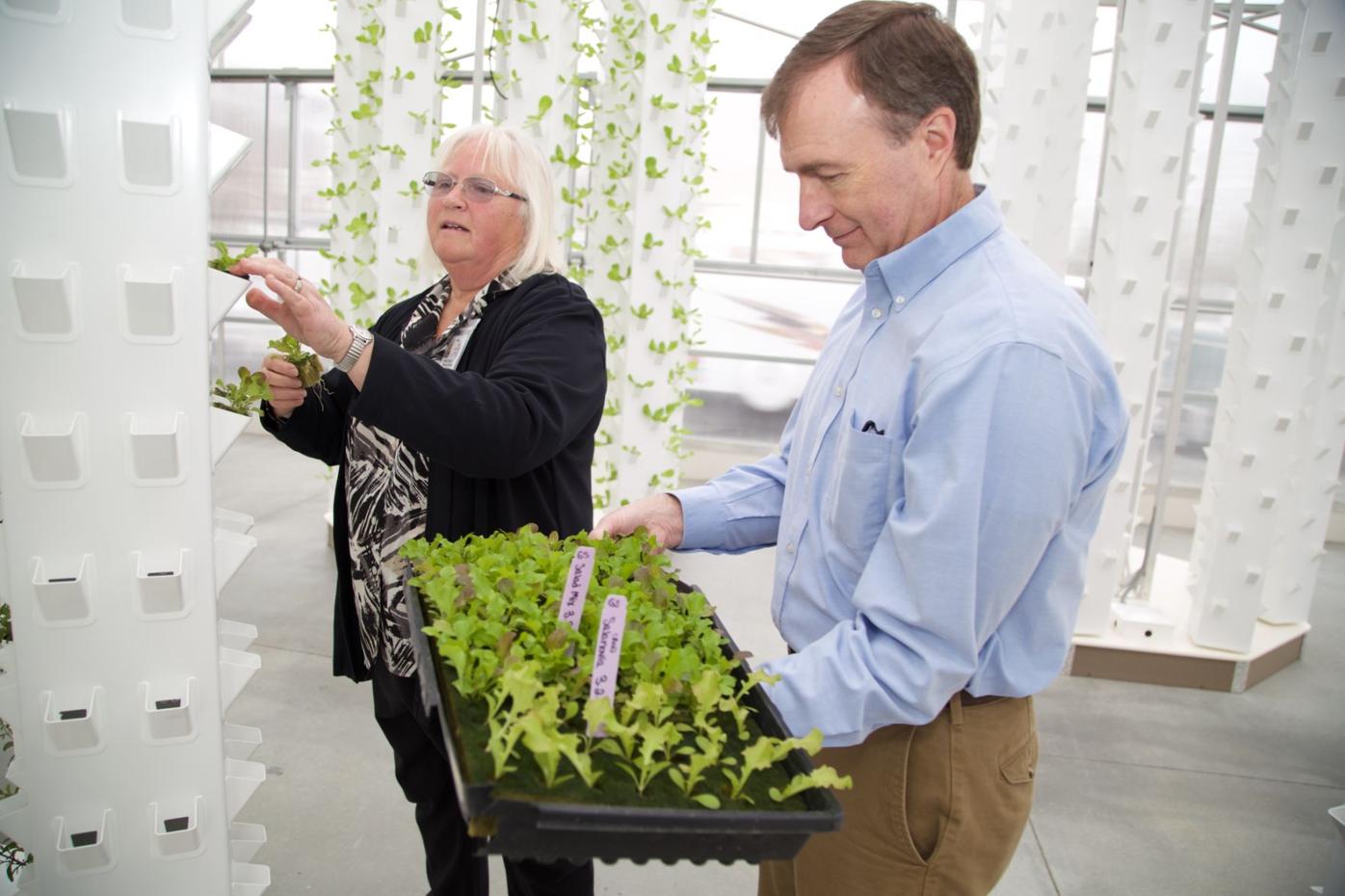 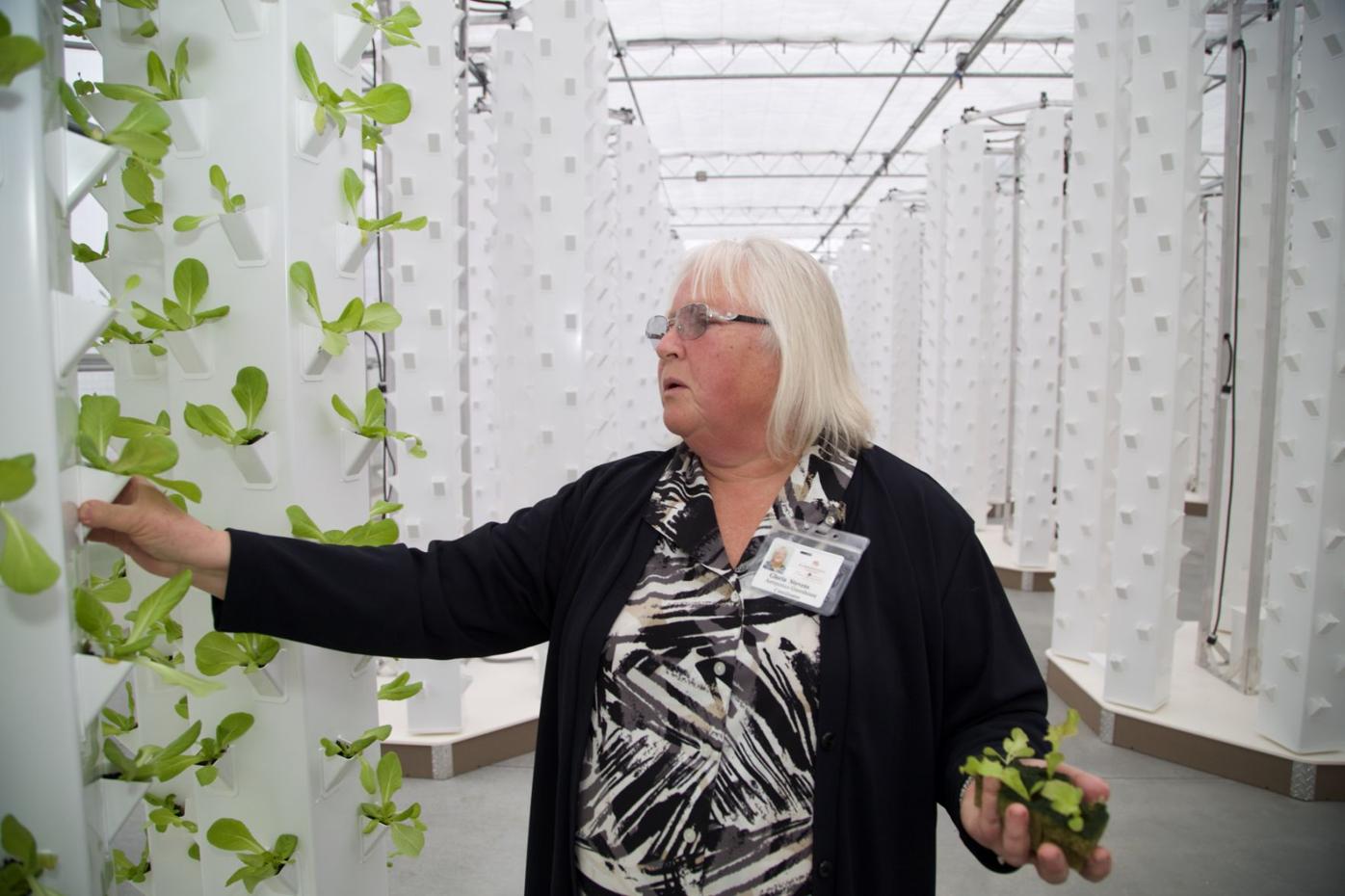 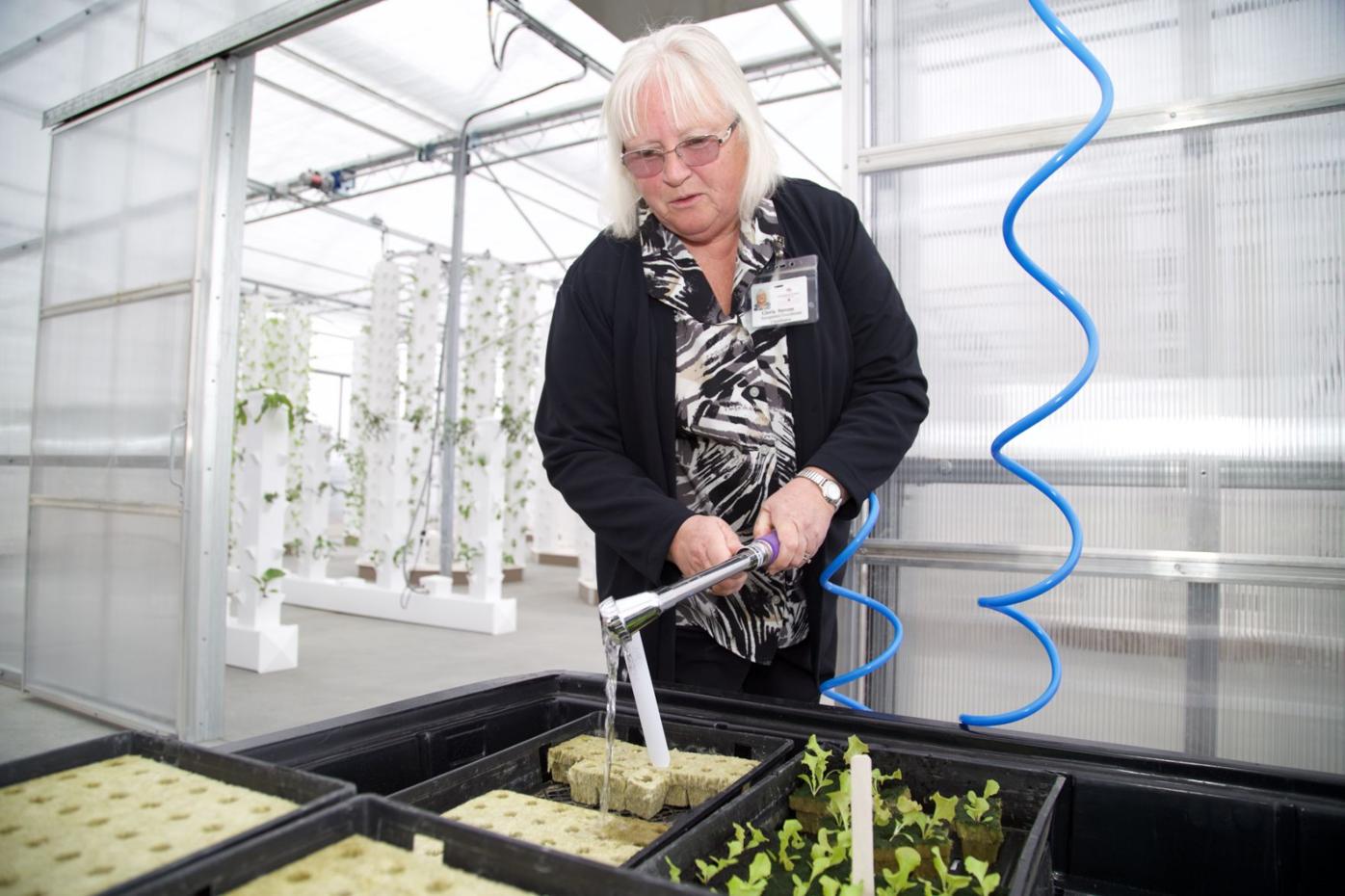 Business and ecology often are talked about as if the two are pitted against each another.

But they actually operate on very similar principles.

In both, competition can play a big role in refining survival strategies over time.

And often the success of a species, or a business, relies on symbiosis — mutually beneficial relationships that help parties that are different to thrive.

At Garden Spot Village in New Holland, the two are being brought together to create some symbiotic relationships of their own, in the form of a new 4,600-square-foot aeroponic greenhouse.

At the same time, the greenhouse will be used to provide employment opportunities for people with developmental disabilities.

“It’s really a win-win situation for everybody,” Lindsey says.

The new facility, across the street from the retirement community’s main campus on South Kinzer Avenue,  will also create new volunteer and programming opportunities for the residents.

And Lindsey hopes the state-of-the-art aeroponic growing system will fuel new ideas for others interested in growing their own food in a way that’s better for the environment.

For now, it’s the only commercial-size aeroponic greenhouse at a retirement community in the nation, according to Lindsey.

A different way to grow

Aeroponics is a soilless growing method similar to hydroponics. But with aeroponics, plants are suspended in air with no growing medium at all. The roots are fed nutrient-rich water delivered by misters or a drip system.

The system at Garden Spot Village uses lightweight vertical towers, developed only a few miles away at Aero Development Corp. in Gap, that allow water to run down the inside of 10-foot growing columns to feed the plants.

Lindsey and Stoltzfus began planning for the greenhouse back in 2011, after Lindsey had been exploring other aeroponic systems that he could bring to Garden Spot.

“When we toured Sam’s greenhouse, we were chomping at the bit ready to go,” Lindsey says. “But Sam said ‘Hang on. It’s good, but I can make it better.’”

After 18 iterations of the aeroponic growing system, Stoltzfus finally arrived at a more refined, denser system that generates higher yields, requires less labor and eliminates almost all of the algae that commonly plagues other aeroponic systems.

Although the new greenhouse ran Garden Spot Village close to $350,000, if run properly, Stoltzfus says, the greenhouse should generate enough savings to pay for itself in four years.

The 25 growing pods with 200 white vertical columns inside the Garden Spot Village greenhouse create an otherworldly atmosphere. A few of the columns already have heads of bibb lettuce, basil and other herbs planted in the growing cups, but there is plenty of room for more to grow.

“The last column was put in place only a few days ago,” says Gloria Stevens, aeroponics greenhouse coordinator.

When they reach full capacity, she says, they’ll have about 18,000 plants.

From pod to table

Having all of that fresh produce available for the menu at Garden Spot Village any time of year makes Pezzillo animated with excitement.

“My mind is going in so many directions. I’m like a kid in a candy store,” Pezzillo says. “I’m a farm-to-table type chef, so just being able to walk across the street to get what I need — it’s an unbelievable opportunity.”

Planning menus in the wintertime can be especially difficult, Pezzillo says, as some produce gets prohibitively expensive. The price of a case of iceberg lettuce, for example, peaked at more than $70 last winter.

Now, Pezzillo says, they can grow their own lettuce for less than $20 a case. Not only will it be cheaper, it will be much fresher, more delicious and more nutritious too.

“It’s going to taste like it’s supposed to taste,” Pezzillo says. “It’s not going to lose flavor or nutritional value sitting on the shelf. It’s not going be treated with anything to help it last. No preservatives. No pesticides. It’s how it was supposed to be eaten.”

Lindsey agrees that eating healthy, local foods is a good idea whose time has finally come.

“In the 1980s, healthy eating was seen as something that was almost counter-cultural,” Lindsey says. “By the turn of the century, it was more aspirational. People wanted to do it but they weren’t quite there yet. Now it’s almost an obsession.

“This really gives people an opportunity to eat locally, eat fresh and healthy all year round.”

Perhaps the greatest testament to how much the residents and the surrounding community value healthy, local eating is the amount of money Garden Spot Village was able to raise for the project.

A capital campaign covered the majority of expenses, raising over $300,000 from private donors to build the new greenhouse.

That money wasn’t raised just for the benefit of the residents. It was also meant to be a benefit for the greater community, Lindsey says.

To achieve that mission, Garden Spot Village is partnering with Lighthouse Vocational Services to create jobs at the greenhouse for those who would not be able to find gainful employment otherwise, Lindsey says.

Lighthouse is a nonprofit based in New Holland that provides skill building, sheltered employment programs and job placement services to persons with developmental challenges.

Lighthouse will send part-time crews of temporary workers to see how well Lighthouse employees fit in at the greenhouse, which will eventually lead to full-time employment at Garden Spot Village.

Lindsey says they’re not sure how many employees they’ll need at the greenhouse yet.

“We’re focused on linking people up with the job that they like, not just saying you must work so here’s a job,” says Pam Rankin who oversees customized employment at Lighthouse.

The greenhouse will be a new kind of opportunity for their employees, Rankin says. She’s looking forward to seeing what benefits working in the tranquil natural environment of the greenhouse will have for the Lighthouse employees.

Residents have also been eagerly following the progress of the project, Lindsey says, and many have shown interest in volunteering at the greenhouse.

“Gardening is a big thing here,” Lindsey says. “If there is such a thing as competitive gardening, we have it.”

A seed for something bigger

Lindsey suspects that the recent completion of the new greenhouse  — roughly the size of a convenience store —  may be just the beginning.

“I would guess that it will expand here over the course of time and we’ll have more and more use for it,” Lindsey says.

He also believes that the greenhouse will inspire others to follow suit. He’s hoping to share the experience with other organizations from all over the country and the world.

When produce travels thousands of miles just to reach your dinner plate, finding a cost-effective way to eliminate those transportation costs and the environmental impact that comes with it is a powerful thing, he said.

And the possibilities for that idea to catch on, Lindsey says, are huge.