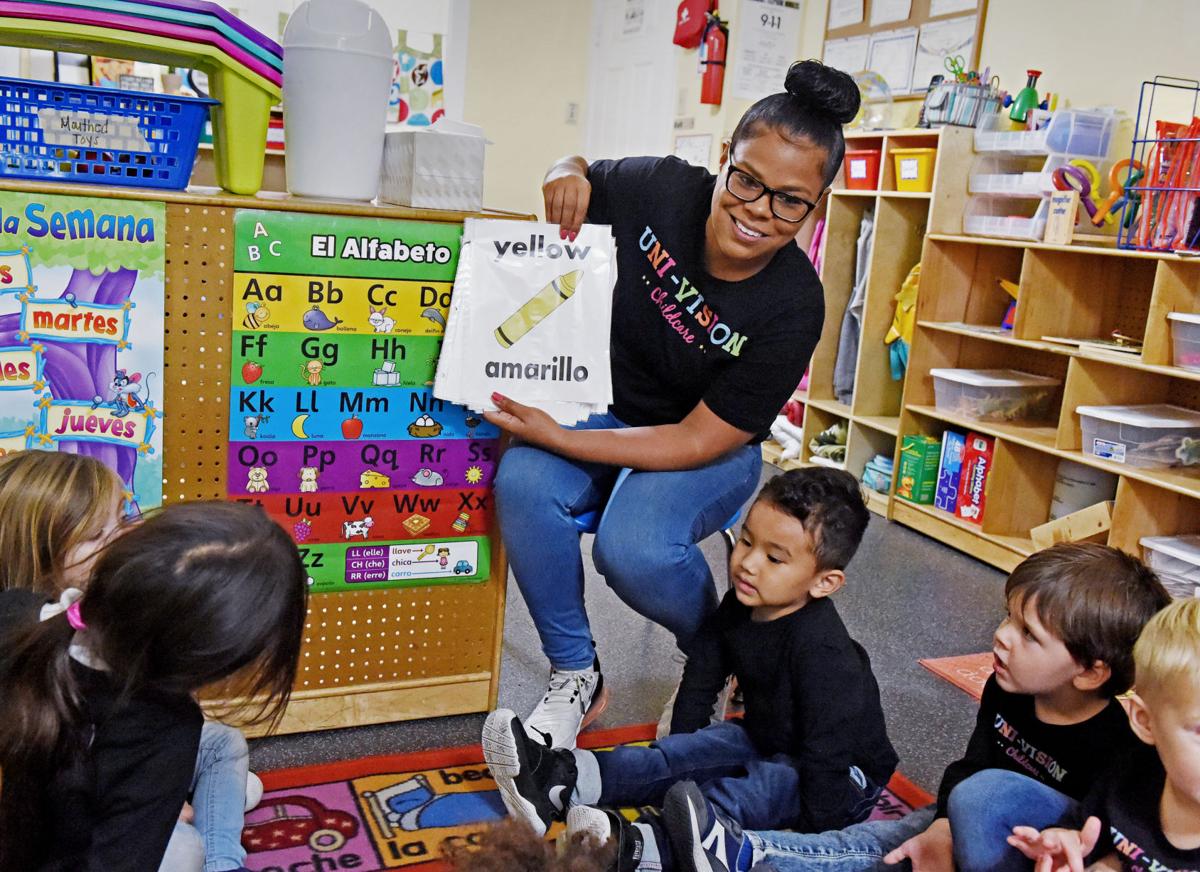 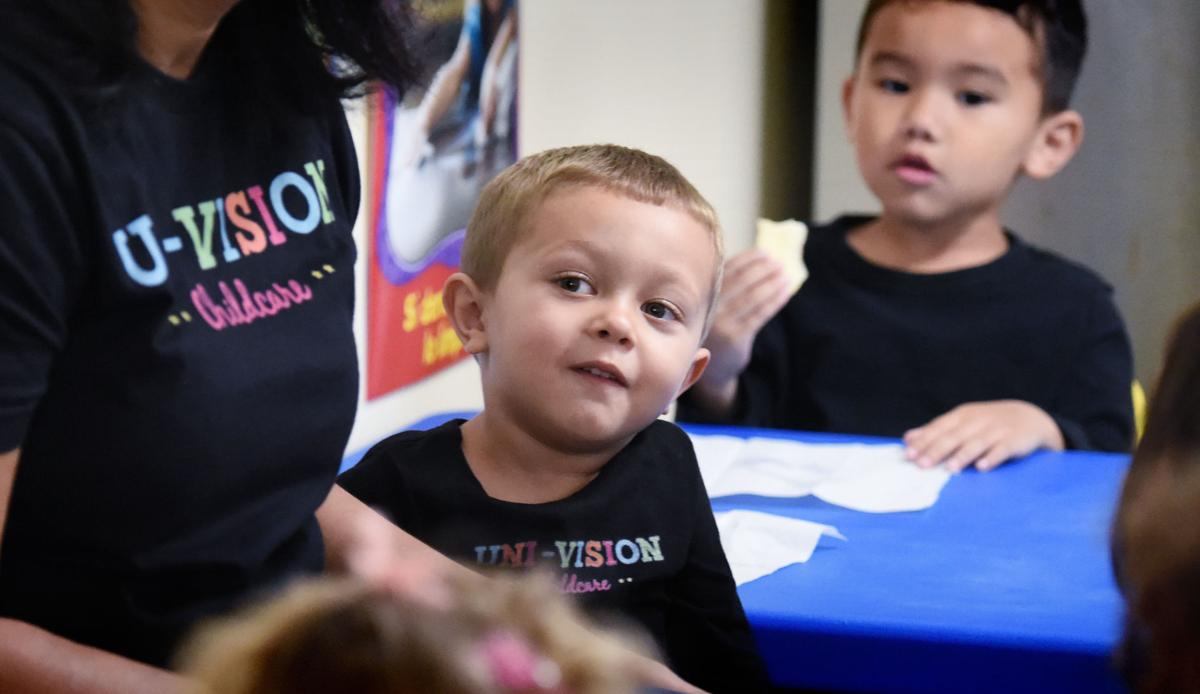 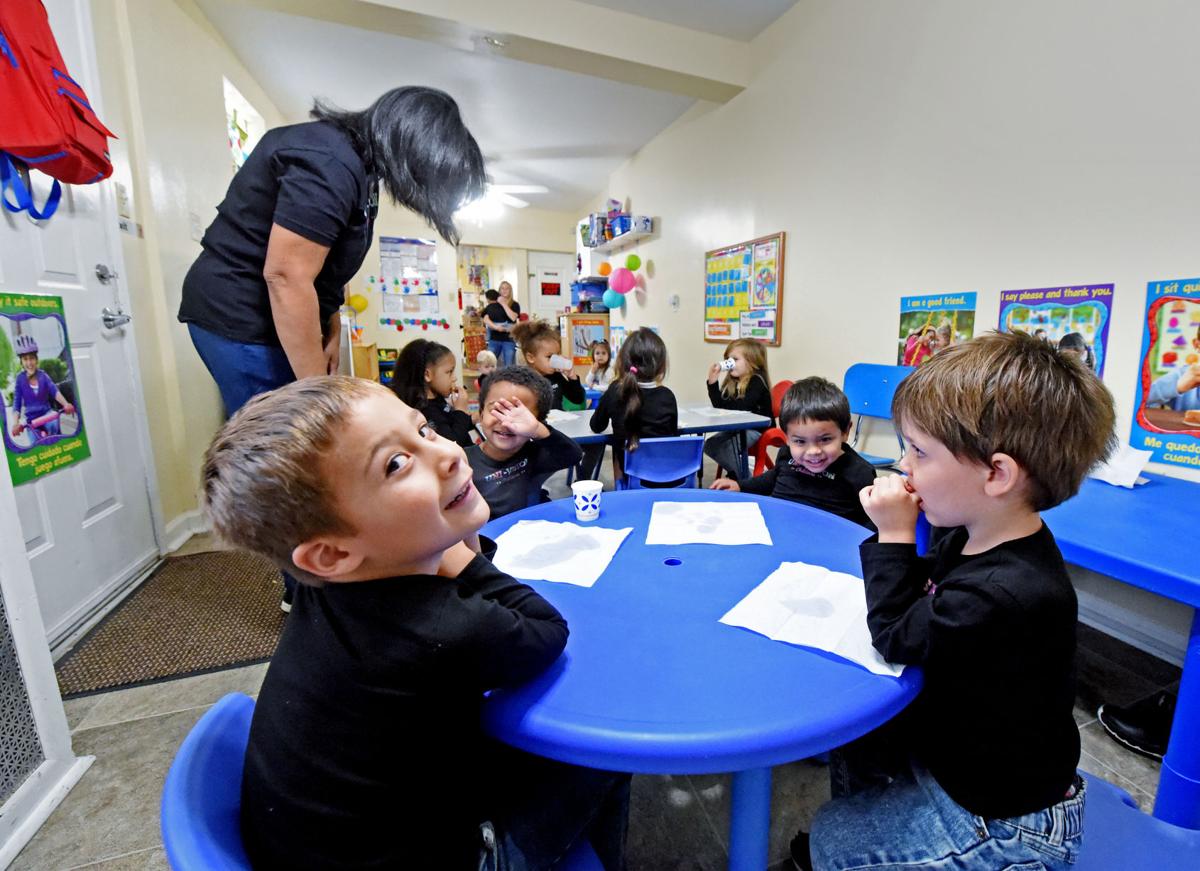 Getting a snack at Uni-Vision Childcare Center are (front table, from left) Isaac Brubaker, Jonathan Cameron, Lorenzo Plantz and Henry Carpenter. Seated at the table behind them are, from left, Zoe Kennard, Simya Hollman, Liara Alvarez and Dakota Egner. 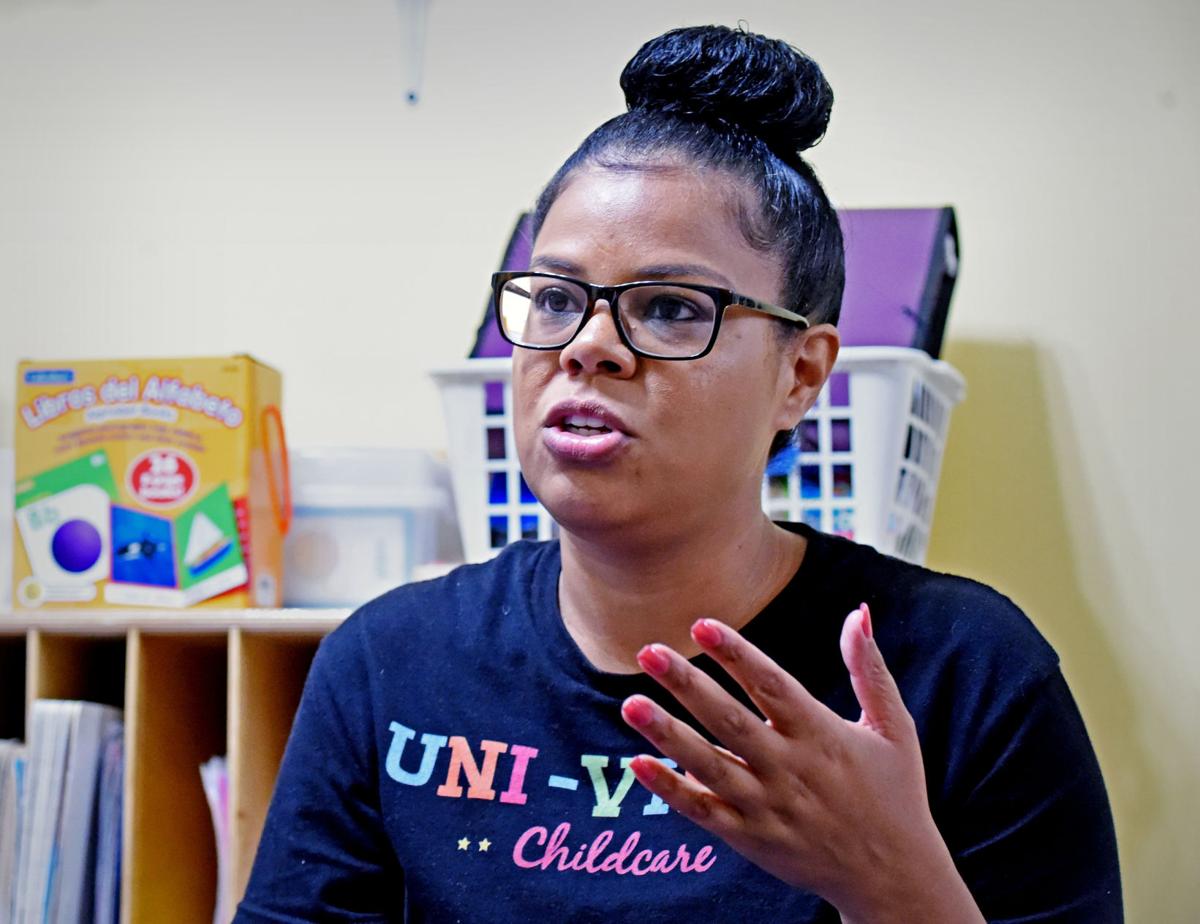 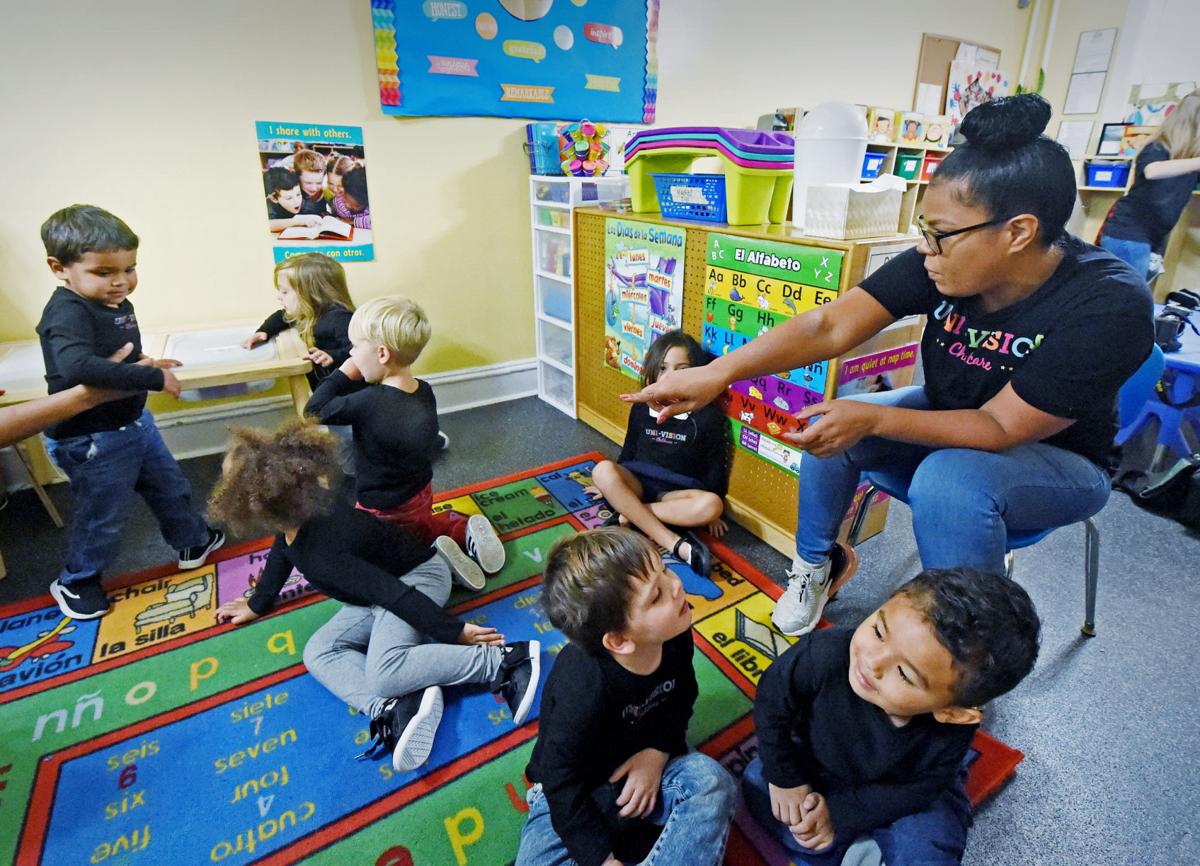 Champagne Domingo works with children at her Uni-Vision Childcare Center. 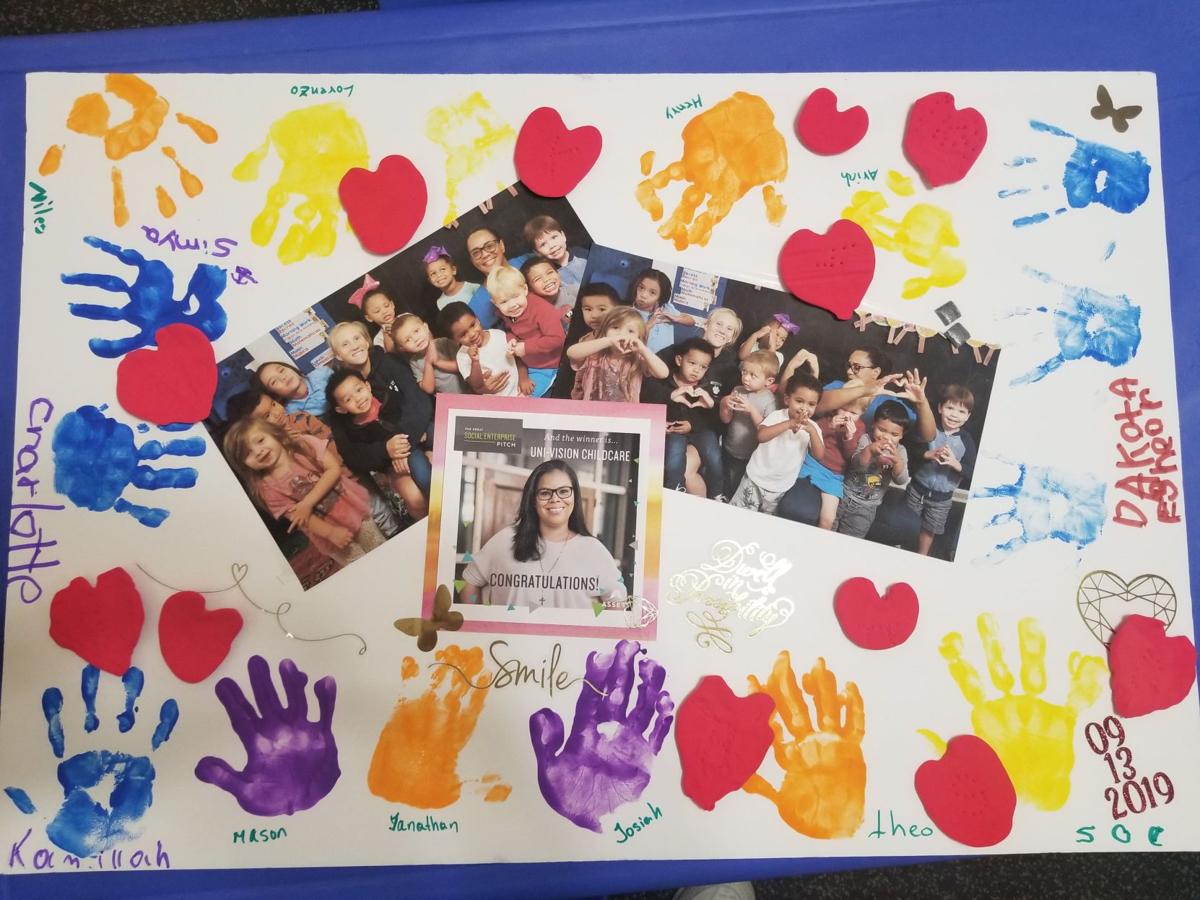 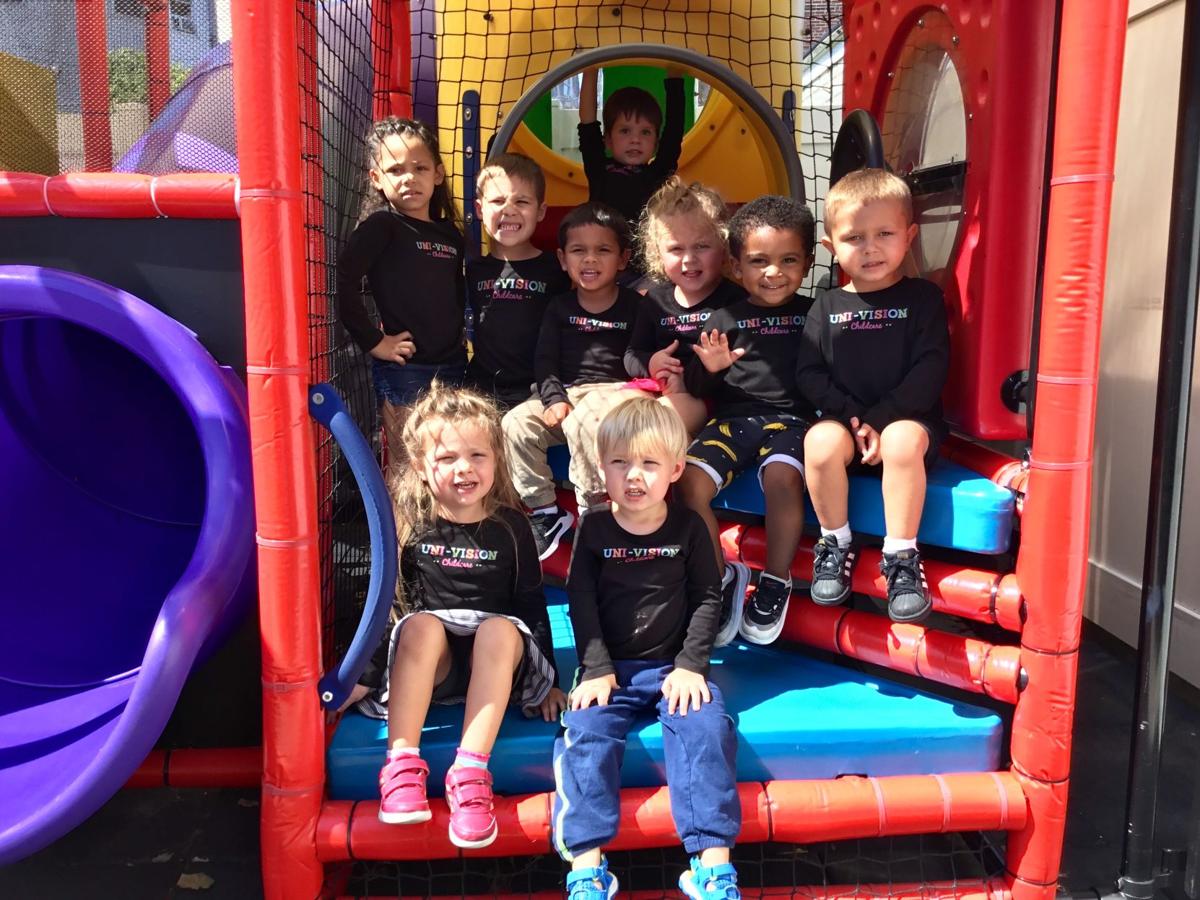 Children attending Uni-Vision Childcare Center gather on its outdoor playground equipment, which was donated by the Children Deserve a Chance Foundation.

Getting a snack at Uni-Vision Childcare Center are (front table, from left) Isaac Brubaker, Jonathan Cameron, Lorenzo Plantz and Henry Carpenter. Seated at the table behind them are, from left, Zoe Kennard, Simya Hollman, Liara Alvarez and Dakota Egner.

Champagne Domingo works with children at her Uni-Vision Childcare Center.

Children attending Uni-Vision Childcare Center gather on its outdoor playground equipment, which was donated by the Children Deserve a Chance Foundation.

Champagne Domingo knows she was an unlikely person to start a child care center.

She’s an only child. She has no kids of her own. She never took a class in early childhood education.

And she had never changed a diaper.

Domingo has a simple explanation for her decision to enter that improbable  field.

“This is something that God put on my heart to do... God doesn’t call the qualified. He qualifies the called,” she said.

Her faith also gave her the courage to plunge in. As Domingo puts it, “I wasn’t afraid to get in the water because I knew that God was my life preserver.”

Using that analogy, you could say she’s become an elite swimmer.

From opening in December 2015 with just two children enrolled, Uni-Vision now is full with 14 children — with a waiting list that exceeds 120.

Domingo is looking for a bigger location, preferably downtown, that would provide room for 50 children.

Twists in the career path

Domingo, 42, got to this point by following a circuitous route.

Growing up in the 200 block of South Ann Street, Domingo spent three years at Lancaster Catholic High School before graduating from the Lancaster County Academy. She did not attend college.

Instead, she went into business, following in the footsteps of her mother, a Realtor, and her grandmother, who had sold Popular Club products. Domingo became a successful event/party coordinator, operating in New York, then in Atlanta.

But 13 years ago, when her grandmother was diagnosed with Parkinson’s disease, Domingo moved back to Lancaster and eventually became her primary caregiver.

During that time, Domingo and her Spanish-speaking grandmother spent three months in her native Puerto Rico getting medical care.

Being there as her grandmother’s advocate prompted Domingo to dramatically improve her own rudimentary Spanish — a step that would pay dividends in the future too.

Years later, after her grandmother moved to a retirement home, Domingo felt too much time had passed to return to Atlanta and rekindle her event-planning business.

But Domingo’s mother had an idea. Domingo and her mother owned a house at 505 W. King St., where Domingo lived on the second floor.

The mother suggested turning the first-floor apartment into space for a daycare provider, who could partner with Domingo and mentor her in the business. But the partnership soon fizzled out and Domingo alone was in charge.

“God was saying, ‘This is for you, not for someone else.’ So we changed the name and we rebranded” to Uni-Vision in December 2015, said Domingo.

Domingo said she got through that period by leaning on Uni-Vision’s staff while she learned the business as fast as she could.

That was not the only curve in her road.

“This would be a place for them to be encouraged to speak their native language while also learning English and becomg kindergarten ready,” she said.

Domingo had it backwards.

Her center — the only Spanish immersion child care center in the county — is filled with English-speaking children whose parents want them to learn Spanish.

“But now I have no more walls to knock down,” she said. So the next growth spurt will require a new address.

Uni-Vision, which serves children from three months old through age 5, has an immaculate, cheerful and secure facility in a working-class neighborhood.

“This program is not for every child because it’s a lot more structured than most pre-schools or daycares. We do a lot more language because we have to do both languages,” said Domingo.

The center is thriving because of the caliber of its four-employee staff, led by director Ingdira Rodriguez, and the credibility its four-star Keystone rating bestows, Domingo believes.

“It lets parents know that we are high quality, regardless of what we look like or where we are. That was important to me. We’re doing everything these bigger centers are doing,” she said. “What makes us great is we still have small, homey feel.”

Lisa Murray says she learned everything she needed for a 20-plus-year career as a leadership coach, trainer and business consultant way back w…

As schools were letting out one day last week, Kyonna Bowman situated herself at the open door of The Mix at Arbor Place, a community center i…

In the midst of World War II, a handshake deal in Lancaster between Kurt Aronsohn, a hydraulic engineer who had fled Germany, and Charlie Bear…

Earlier this month, Jim Radel and Darrel Stauffer put a sign on the sidewalk outside their 332 N. Queen St. store that signaled the impending …