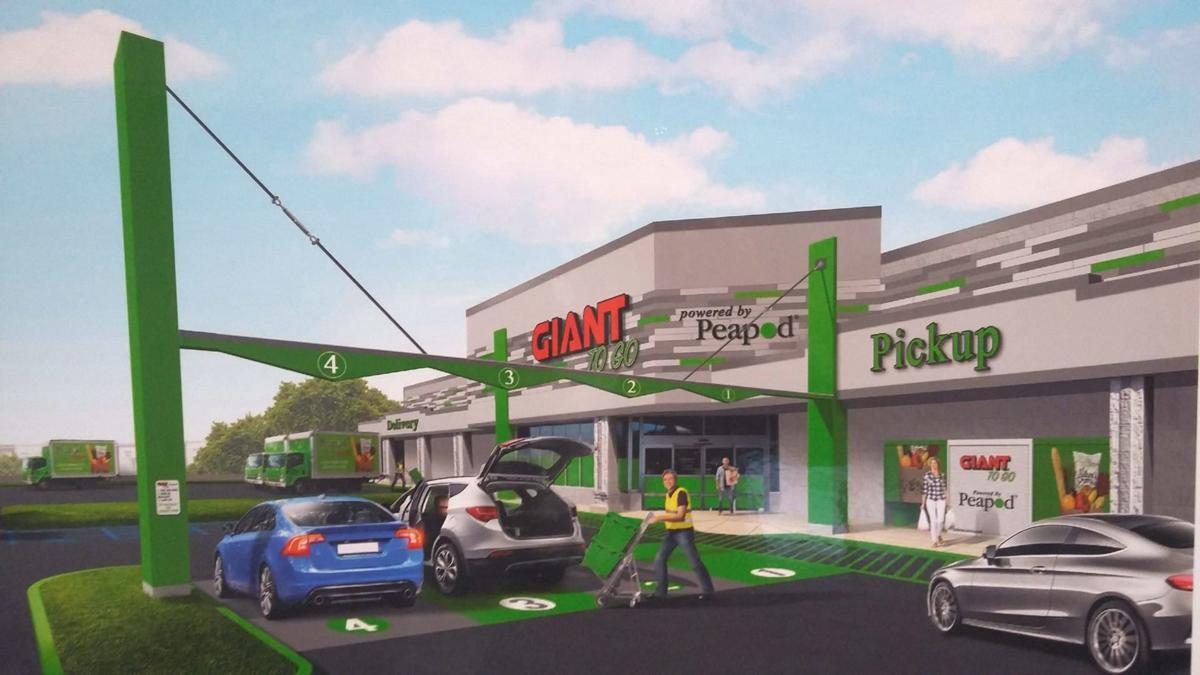 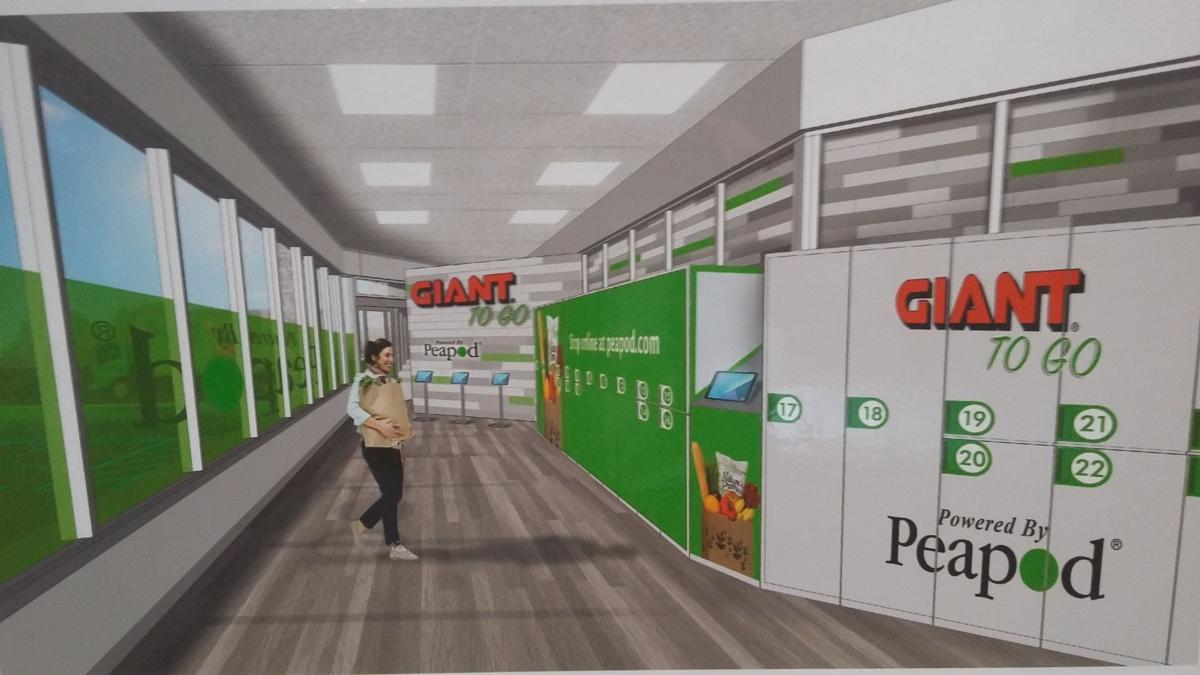 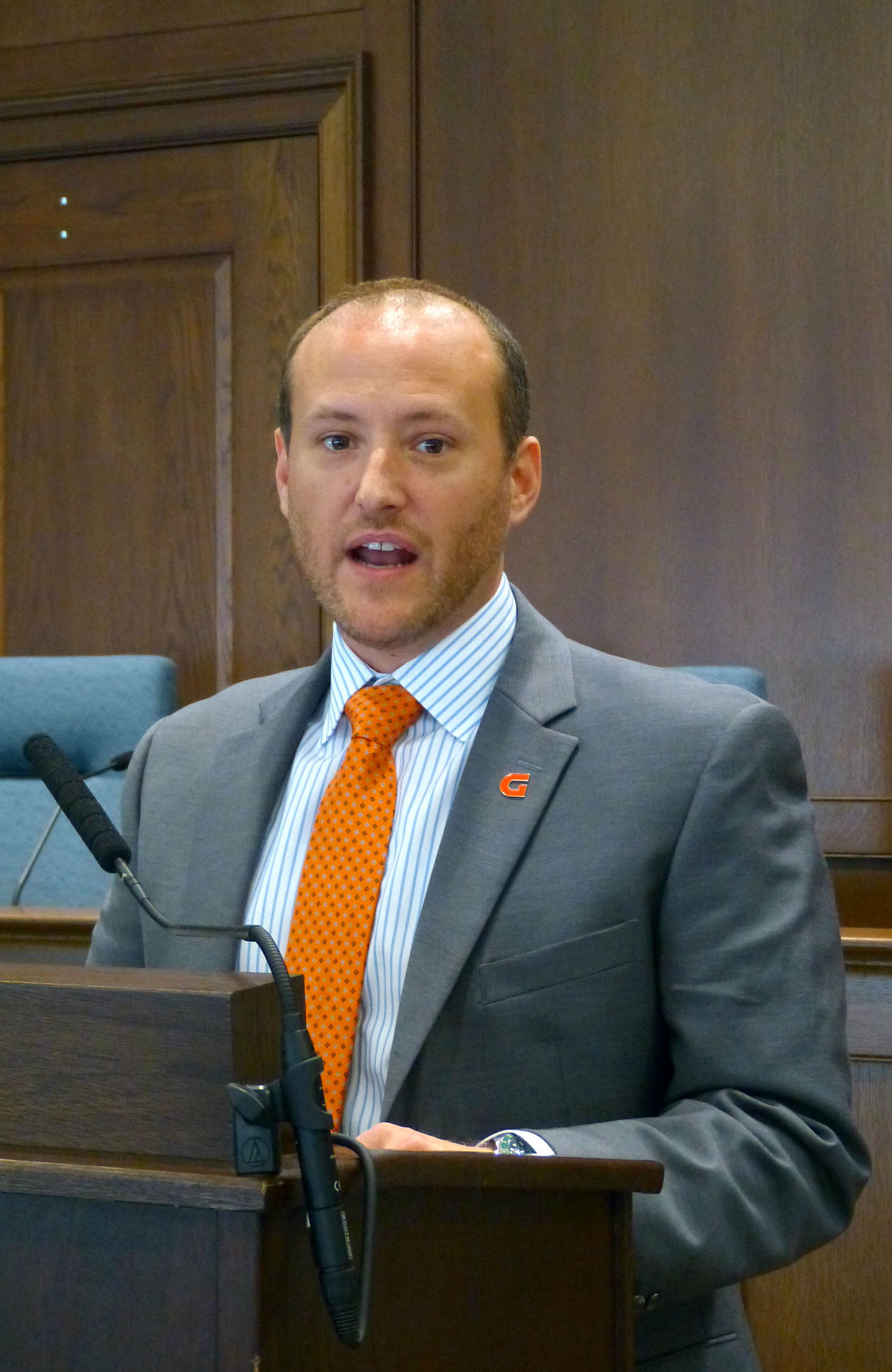 Giant Food Stores President Nicholas Bertram discusses the conversion of the North Reservoir Street Giant into a Peapod e-commerce hub at a news conference at City Hall in Lancaster on Monday, June 25, 2018. 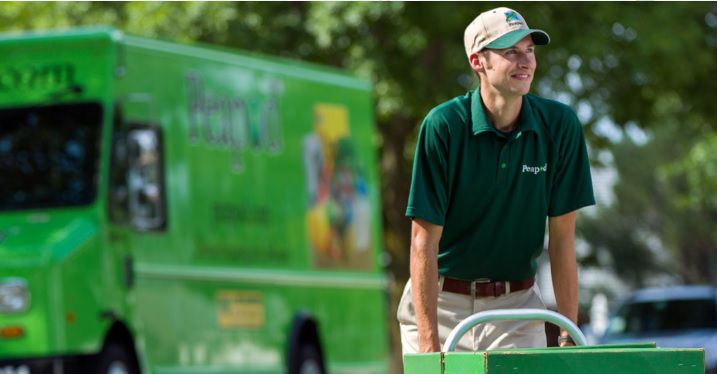 This Peapod publicity photo depicts a delivery truck and driver. 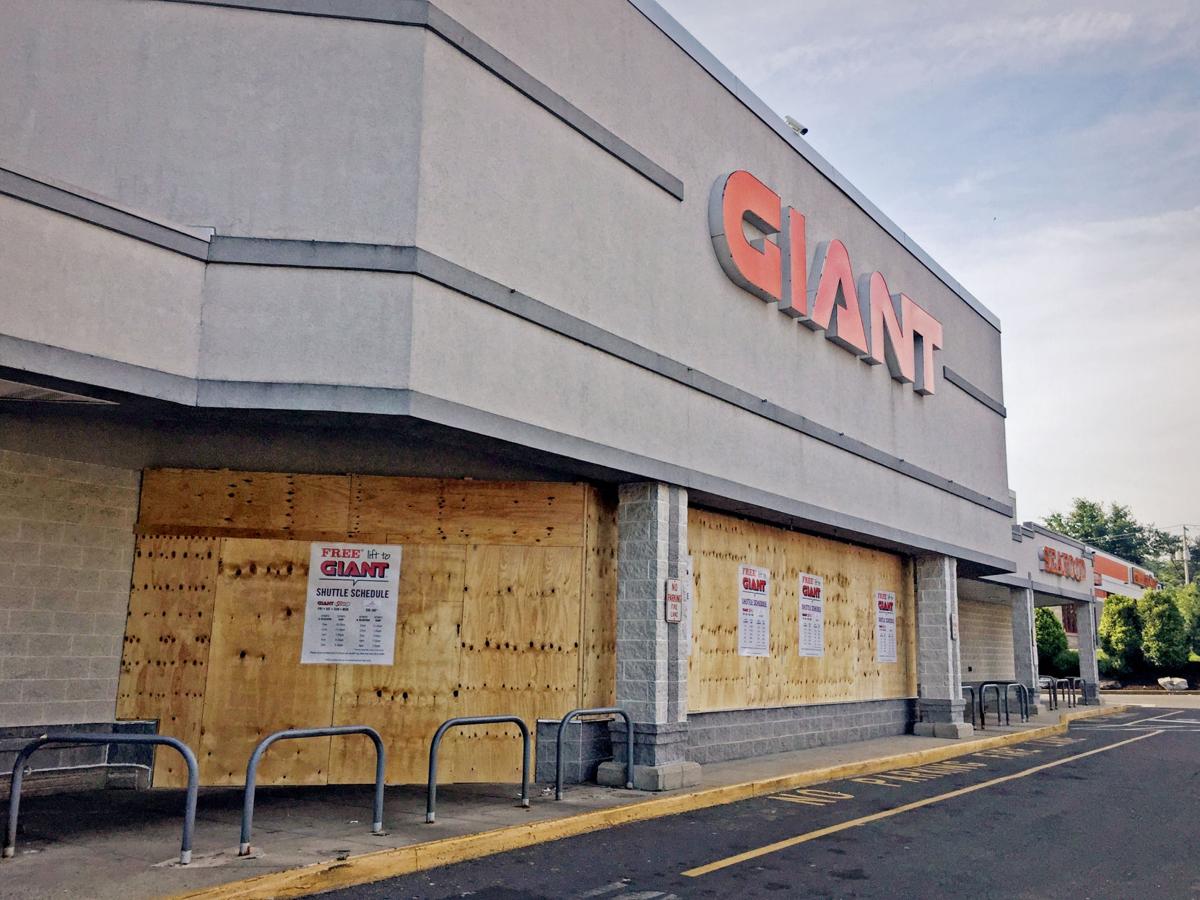 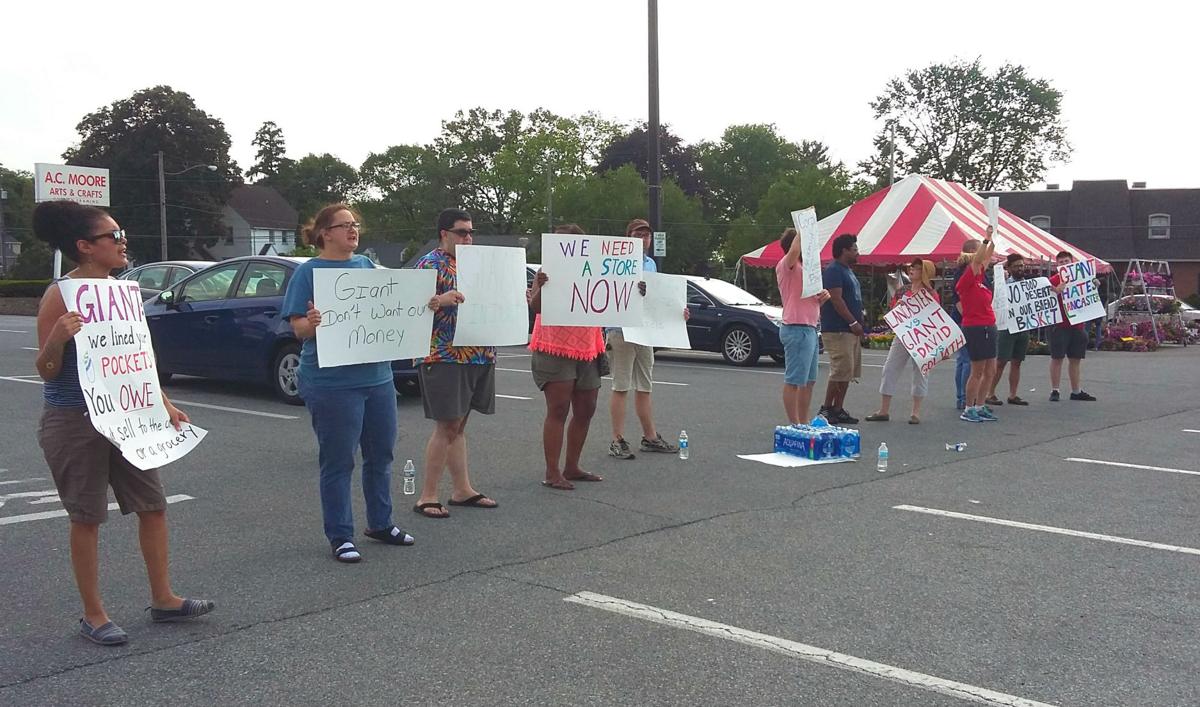 Protesters display signs and chant slogans across the street from the Lancaster Shopping Center Giant, denouncing Giant's closure of its Reservoir Street supermarket, on Thursday, May 18, 2017.

Giant Food Stores President Nicholas Bertram discusses the conversion of the North Reservoir Street Giant into a Peapod e-commerce hub at a news conference at City Hall in Lancaster on Monday, June 25, 2018.

This Peapod publicity photo depicts a delivery truck and driver.

Protesters display signs and chant slogans across the street from the Lancaster Shopping Center Giant, denouncing Giant's closure of its Reservoir Street supermarket, on Thursday, May 18, 2017.

The shuttered Giant supermarket on North Reservoir Street in Lancaster is to reopen this fall as a hub for the Peapod online delivery service, company and city officials said Monday.

As an e-commerce site, the location will employ about 150 people, Giant said, double the 75 who worked there when it was a supermarket.

The plan also restores North Reservoir Street as a local source for groceries.

“This is a huge step forward for the northeast neighborhood and the city as a whole,” Mayor Danene Sorace said.

Peapod partners with Giant to offer home delivery of groceries ordered online. It began service in Lancaster County in 2015. Last fall, it expanded to zip codes in and around Lancaster and East Petersburg.

The location will also offer curbside pickup to accommodate local customers, allowing them to walk or drive there and receive their orders.

That feature addresses a major concern of those who protested the supermarket’s closure last year: Ensuring access for the many neighborhood residents who don’t drive.

Giant President Nicholas Bertram said Giant will spend about $6 million to remodel the 39,500-square-foot site and hopes to open in October.

He said its layout will allow Giant to provide onsite ordering assistance for customers who may not have internet access or be comfortable with online ordering.

Bertram also said the company will look into enabling access for customers who use food stamps.

The North Reservoir Street site will be the fifth in Pennsylvania for the Giant-Peapod partnership.

The project is part of a $22 million investment by Giant in Lancaster County: Four supermarkets have been spruced up, and Giant has broken ground for a gas station near its 1008 Lititz Pike location, which it plans to open in August.

Giant closed the North Reservoir Street supermarket in May 2017, along with one at 2074 Fruitville Pike. Both were older stores with small footprints, and Giant said they didn’t fit its long-term plans here.

There was little if any opposition to the Fruitville Pike closure. The Hobby Lobby chain has leased the 49,000-square-foot property and has begun renovations there, with plans to open later this year.

The North Reservoir Street closure, however, sparked a backlash, with community members protesting the loss of a grocery within walking distance as well as the loss of jobs and the presence of a large vacant property in their backyard.

At the start of this year, Bertram succeeded Tom Lenkevich as Giant’s president.

In April, Giant made a portion of the property’s parking lot available for neighbor parking — an amenity that Giant says will continue — and in May, it apologized for its handling of the closure.

Giant apologizes for its handling of Reservoir Street supermarket closure

"I'm pleased to see that Giant has chosen to reinvest in the neighborhood," City Councilman Ismail Smith-Wade-El said, citing the jobs, the food access and the maintenance of parking availability.

Peapod could be a great employment opportunity for some of the Puerto Ricans who relocated here after Hurricane Maria, said City Councilwoman Janet Diaz.

Sorace said she’s impressed by the attitude of Giant’s new regional management team, saying its sincerity and integrity “have gone so far in rebuilding goodwill and trust.”

“We have been listening closely to the community,” Bertram said.

The supermarket industry in Lancaster County is evolving rapidly. Whole Foods is to open Wednesday at The Shoppes at Belmont on Fruitville Pike, while Wegmans has announced a September opening for its branch at The Crossings at Conestoga Creek. Both stores are their respective companies’ first here.

Residents angry over decision to close Giant in Lancaster city: 'Let’s fight them tooth and nail'

Editor's note: This story was updated Monday afternoon with additional detail and comment.

Giant Food Stores said the conversion of its North Reservoir Street site into a Peapod hub is part of an set of projects that includes a gas station in Warwick Township and renovations at the following stores:

The two biggest supermarket operators here, Giant and Weis, say they respond to industry trends and consumer preferences, not to a single new …