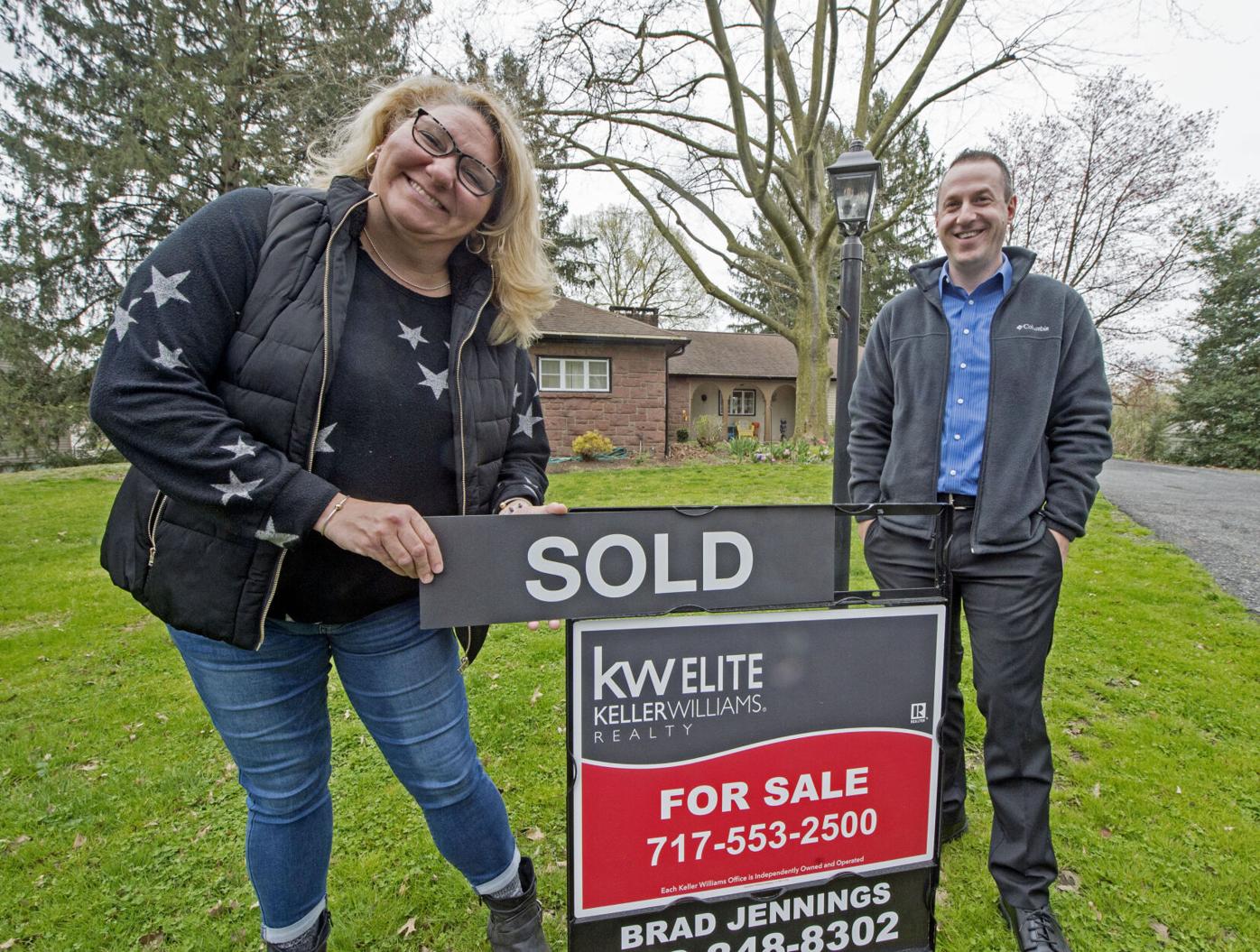 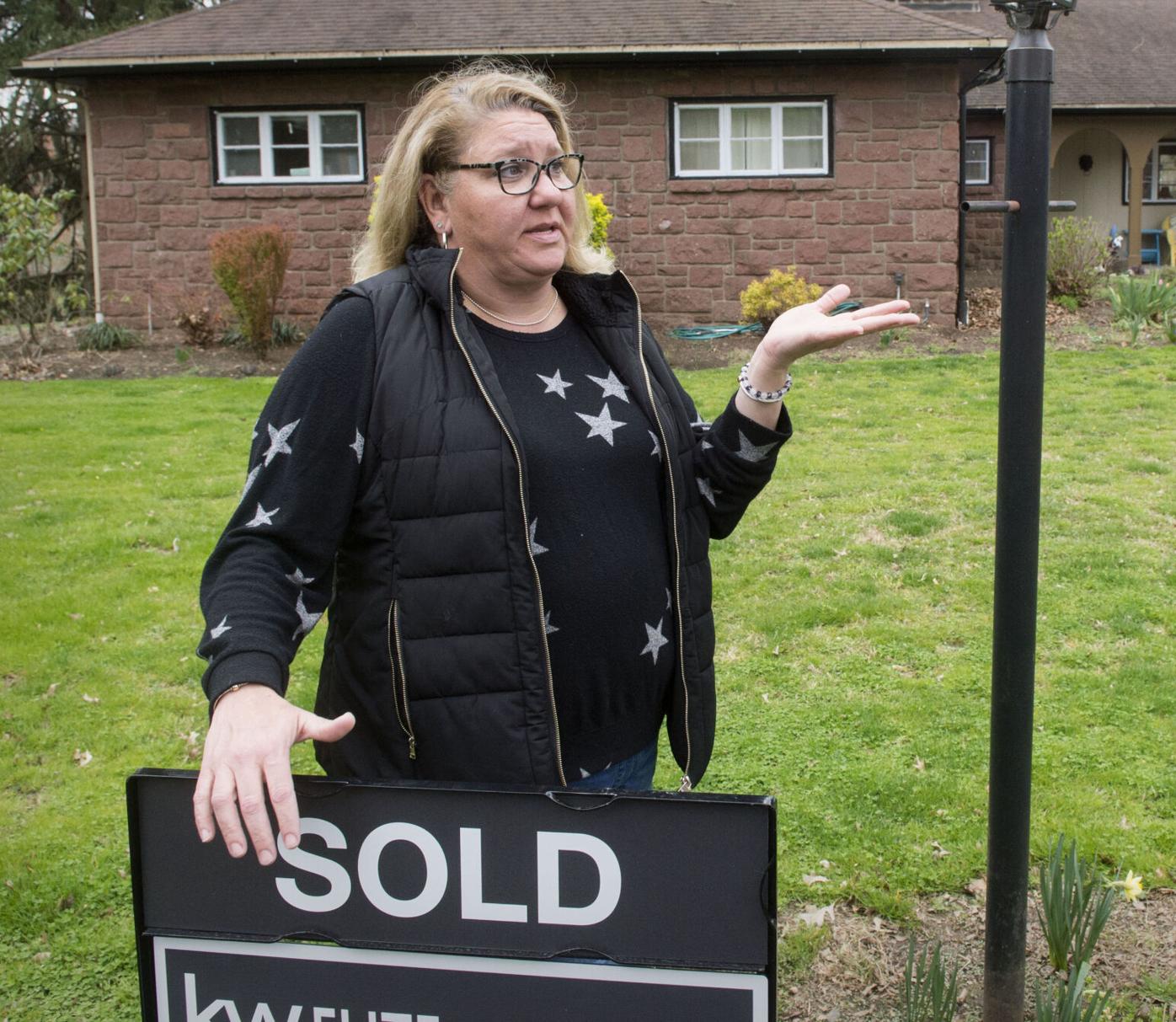 Katherine Thomas talks about the sale of her Lancaster Township home Friday, April 9, 2021. 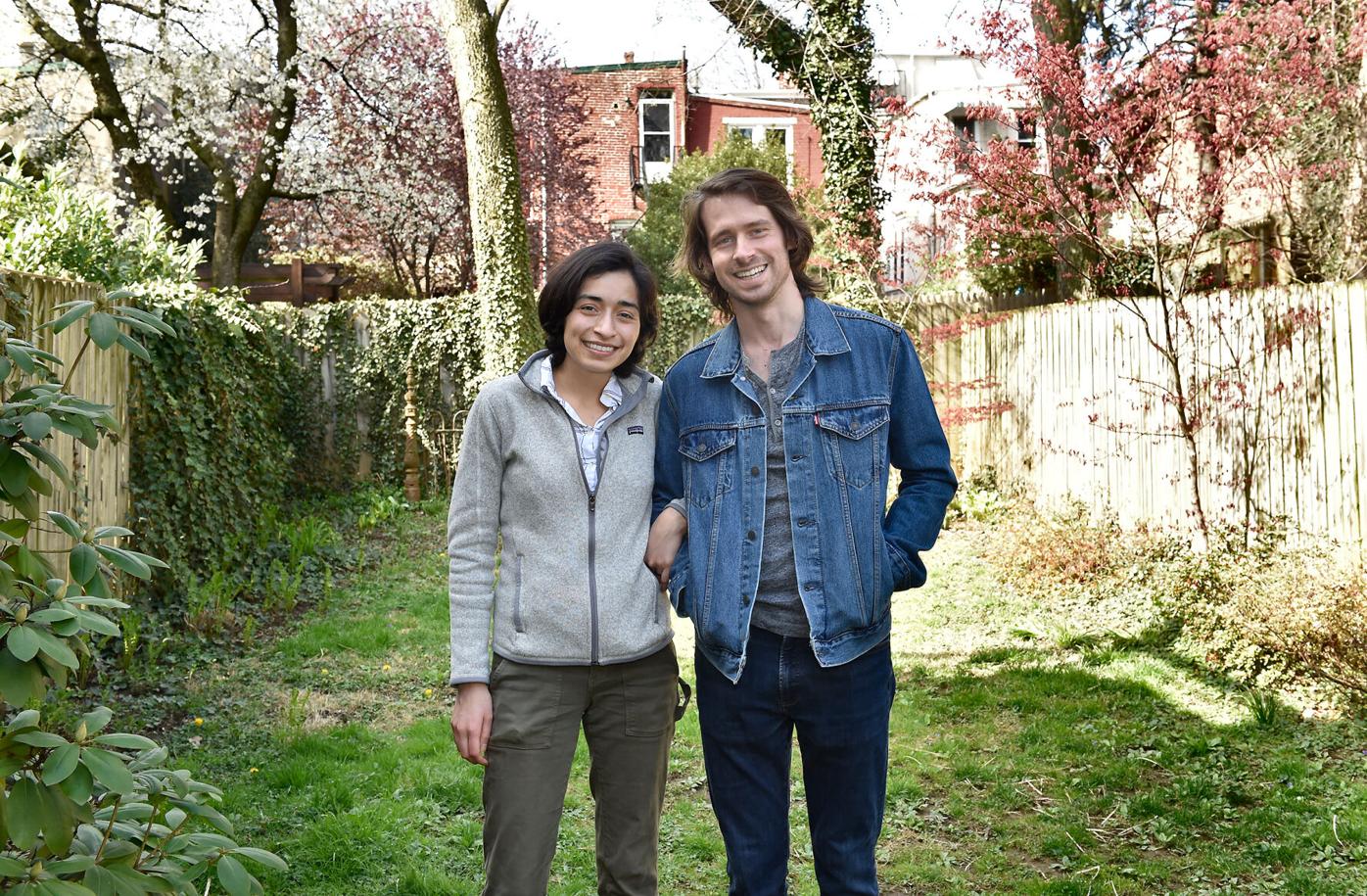 Crystal Reynaga and Colin Rathbun are pictured in the backyard of the home they have bought on the 300 block of West Grant Street on Sunday, April 11, 2021. After months of frustration as would-be homebuyers, Colin and Crystal made a successful bid for this home in Lancaster city after being overbid on other properties. 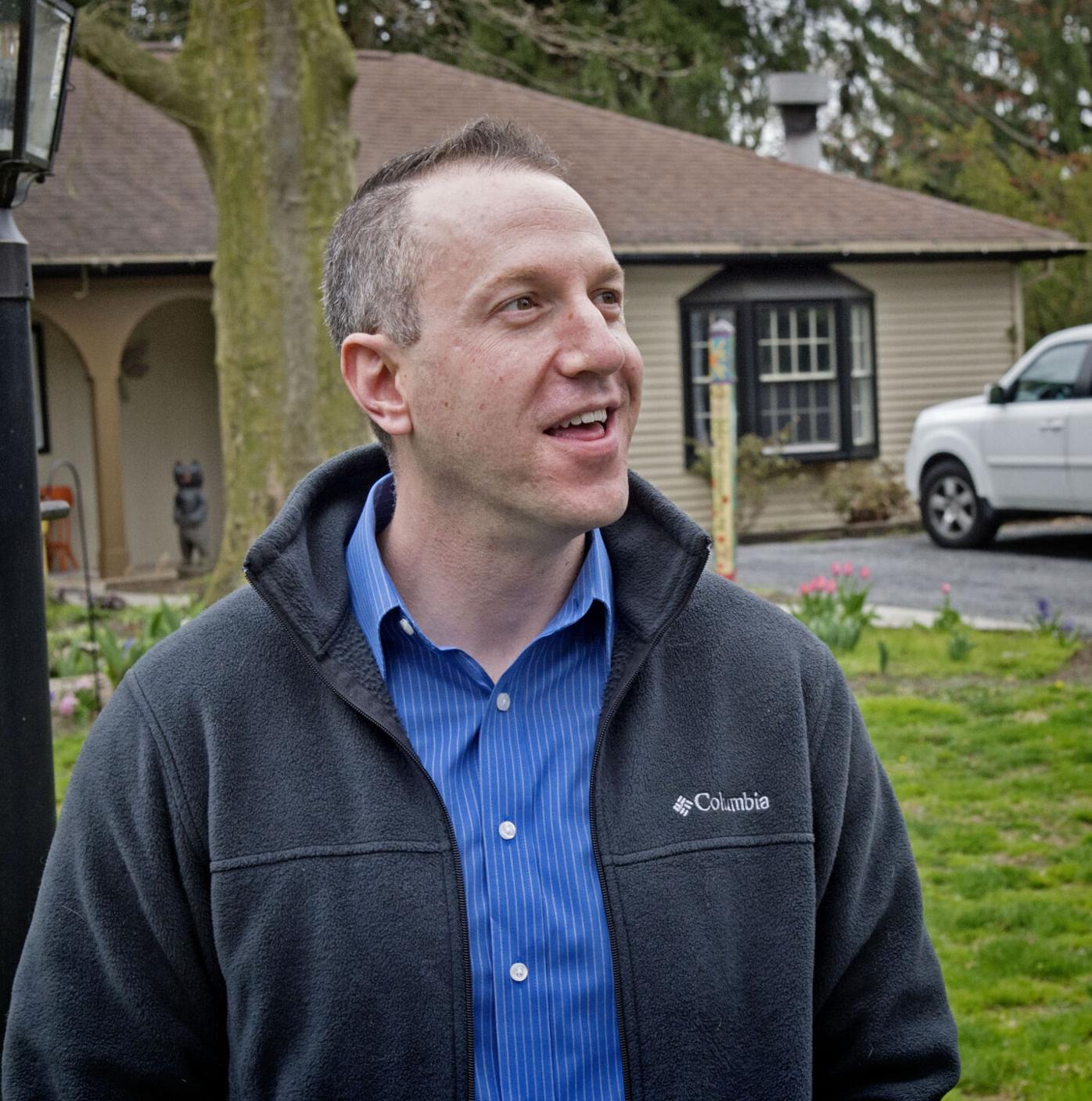 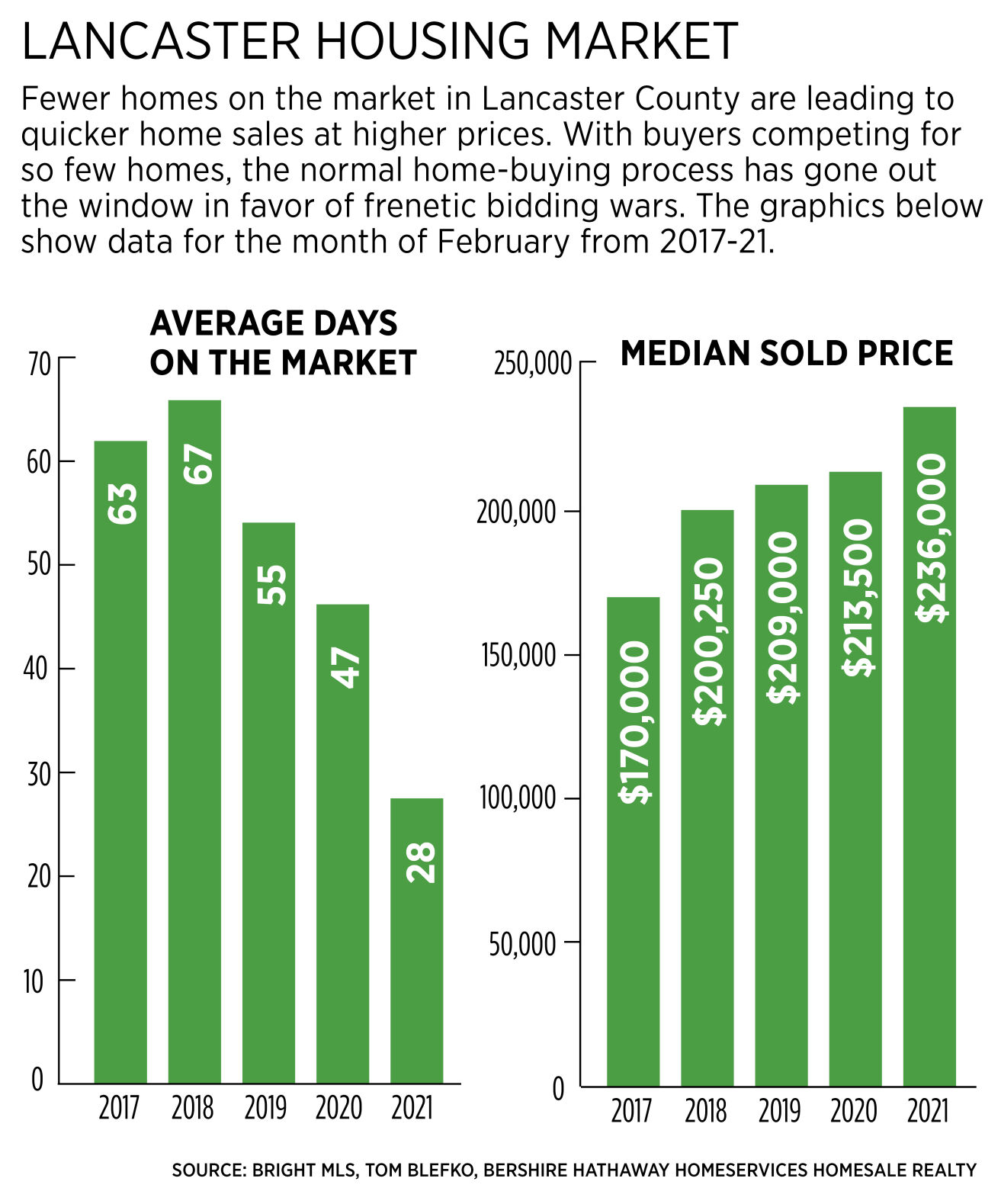 Katherine Thomas talks about the sale of her Lancaster Township home Friday, April 9, 2021.

Newly minted college professors Colin Rathbun and Crystal Reynaga began looking for a home last spring in Lancaster city since it is midway between his job teaching organic chemistry at Dickinson College and hers teaching physiology at Bryn Mawr College.

Well-qualified buyers with stable incomes, Rathbun left Boulder, Colorado, and Reynaga left Durham, North Carolina, and the 31 year olds had been renting in the city. They put in a couple offers on homes, and then a couple more, until they had racked up five rejections.

“We were writing up more standard offers and we were just getting blown out of the water by people waiving inspections or coming in with full cash offers,” Rathbun said.

So when a row home was listed in early April in the 300 block of Grant Street, Rathbun and Reynaga went to see it the next day, and then on the following day offered $15,000 more than the $225,000 list price. They also agreed to waive the home inspection. It was finally enough to get them their first house.

“We learned some lessons along the way,” Rathbun said, while adding: “We’re hoping this still ends up being a good investment in five years and that we didn’t buy high and have to sell low.”

Rathbun and Reynaga are among the relatively few successful buyers in a local residential real estate market unlike anything even veteran agents have experienced during the past 30 years.

The usually busy spring home buying season is underway in a market that has been severely distorted by the pandemic. Residential housing inventory is at an historically low level because of people unwilling to sell and face the prospect of moving during the pandemic. At the same time, low interest rates, relatively strong wages and a pandemic that has caused many people to reassess their living situation has enlarged the pool of buyers.

With so many buyers competing for so few homes, the normal home buying process has gone out the window in favor of frenetic bidding wars. Even the traditional – and prudent – home inspection is going by the wayside as anything getting in the way of a quick sale is being jettisoned.

“It’s the wild west right now. It doesn’t make sense,” said Katherine Thomas, who within three days of listing her Lancaster Township home next to the Conestoga River for $399,900, accepted an offer that was $25,000 over asking price, and came without an inspection or an appraisal condition.

“We stopped even looking after four offers because it started getting overwhelming,” she said.

Just before the beginning of the pandemic, Lancaster County’s market was hot because there just weren’t enough homes for sale. In February 2020, there were only 813 active home listings, 1,000 fewer than there had been just two years before, according to data from the Multiple Listing Service.

Fast forward to February 2021 and the number of active listings had dropped to 378, and then declined to 365 in March. That paltry figure means there are now three times more real estate agents than actual homes for sale here, according to the Lancaster County Association of Realtors, which lists some 1,400 agents.

“This is just unheard of. We’ve never seen anything approaching this,” said Jim McPhail, who has worked in local real estate since 1991 and is now a realtor/team leader for Berkshire Hathaway HomeServices Homesale Realty, the county’s largest residential real estate brokerage.

“You’ve got buyers who have lost out on four, five, six or seven different homes, and now they’re just getting extremely aggressive because they want to win the race,” McPhail said.

With such competition, McPhail said buyers with pandemic-fueled desire for extra space for a home office, gym or outdoor activities quickly realize they can’t be that choosy. “It might be nice to say, I’d really like to have an in-home office, or a bigger yard ... But realistically, that’s not going to be the deciding factor in them purchasing a home.”

Not taking a closer look

With the luxury of multiple offers, sellers often don’t have to accept ones that come with any conditions, even normally prudent ones for a home inspection or qualifying appraisal.

Brad Jennings, an agent with Keller Williams, said he tries be honest with buyers about what it will actually take to buy a home, and not just put in multiple, prudent offers that go nowhere.

“Would you purchase anything over $1,000 without doing your due diligence? If your answer is ‘No,’ then you should not be out actively trying to purchase a home right now. It’s basically that simple,” said Jennings, who had one buyer lose out on 32 different homes.

In February, Kelly Barninger, a 38-year-old audiologist, put an offer above asking price on a three-story townhome in the Millcreek development in West Lampeter Township. Barninger had her offer in within days of the townhome first being listed, but said she couldn’t bring herself to waive the inspection condition for such a major purchase.

“Look, I can’t make the biggest purchase of my life and just throw all caution to the wind here. I feel like I need to at least do my due diligence with the inspection,” she said.

She lost out because the winning bidder waived the inspection, offered even more money, and didn’t need a loan, she said.

“Basically, I didn’t stand a chance,” she said. “Everything I knew about the home buying process, all of my knowledge, just went out the window. Nothing applied.”

Even better, said Laura Rohrer, an agent with Life Changes Realty Group, is not having to even get a loan in the first place.

“Even if you have a large down payment, if you don’t have all the cash you need for the purchase, (buyers) are still getting beat out by people that have cash. It’s insane,” she said.

Tom Blefko, president of the Lancaster County Association of Realtors who has been in the local real estate business for 38 years, said the quick sales and high prices could soon start getting the attention of homeowners, possibly prompting more homes to come onto the market.

But he added: “It’s a two-edged sword. Some of the people who own homes, they can get them on the market and sell those fairly quickly. Then they turn around, and want to buy something, and they’re in competition with 10 or 20 other people.”

That’s what happened with Thomas, who quickly got the $425,000 offer for her Lancaster Township home next to the Conestoga River. The 48-year-old Thomas only put her home on the market after getting some unsolicited inquires about it. That prompted her and her partner Carlos Morales to decide that now was the time to make their planned move to Florida, where she will work in the cannabis industry and he will do construction.

“Never in our wildest dreams would we have imagined what we were able to list this house at. We could not afford to not sell the house,” said Thomas, noting she bought it in 2018 for $264,500.

After accepting the offer on their house in March, Thomas and Morales flew to Florida to look for a new home, finding one for $300,000 in the St. Petersburg area after what she called a “whirlwind” that ended when they were able to put a winning offer on a for-sale-by-owner property

“Sure, this is a great seller’s market, but it is even a more competitive buyers’ market,” she said.

Besides persistently high home prices eventually convincing more people to list their homes, the end of the pandemic could return normalcy to the local residential real estate market.

Jennings, the Keller Williams agent, said the ending of the foreclosure moratorium on mortgages, currently set to expire at the end of June, could cause more properties to come on to the market if foreclosed homes are bought, and then resold, by investors.

But even if the current frenzy eases, some experts say they don’t foresee a big drop in prices. Blefko said that’s because the current hot market isn’t being driven by poorly qualified buyers purchasing homes, like was the case during the Great Recession of 2008, which caused a crash in home prices. Rather, only the most qualified buyers are currently able to secure homes.

A large-scale reassessment of housing needs after the pandemic could also drive new interest in Lancaster County real estate, especially if buyers from out of the area still see it as lower-cost place to live and continue their newly-remote jobs.

There’s some evidence that is already happening.

In a February survey of 89 Berkshire Hathaway agents, 65% said they’d seen an increase in interest from buyers from New York City, Philadelphia, Baltimore and Washington, D.C. Of the surveyed agents, 12.5% said such interest had “significantly increased” and 17.5% said it had stayed the same.

Adam Ozimek, a Lancaster resident and chief economist for freelancing network Upwork, expects remote work to prompt between 7% and 11% of people from urban centers to move to areas with lower costs and less density, which describes Lancaster.

“Compared to much of the northeast corridor, we have relatively low housing costs,” he said. “We also have good Amtrak access to Philadelphia, and a relatively quick drive to D.C. and Baltimore.”

Vince DiStefano, director of information and facilities for the Godfrey marketing agency in …

As some COVID-19 restrictions end, restaurants struggle to find workers; 'I'm having a stupid time trying to find help'

7 tips for buying a house

Historically low numbers of homes for sale in Lancaster County poses a significant challenge to buyers who are interesting in making a purchase right now. Here are some tips from real estate agents and potential buyers about how to navigate the current tight market.

Lancaster County real estate and searching for ghosts at Fulton Theatre: 9 articles from over the weekend [Weekend Reads]

Too busy enjoying the spring weather this weekend to login and get your dose of LNP | LancasterOnline? Not to worry, we got you covered.

About 50,000 people who used a phone app to pay for parking meters in downtown Lancaster have been exposed to a data breach, according to the …

Affordable housing, quality of life and homeless services make up the bulk of Lancaster City Council’s five-year plan for using money it expec…

Earlier this month, Natalia Latsios listed a two-bedroom condo at 6 p.m. on a Sunday night.