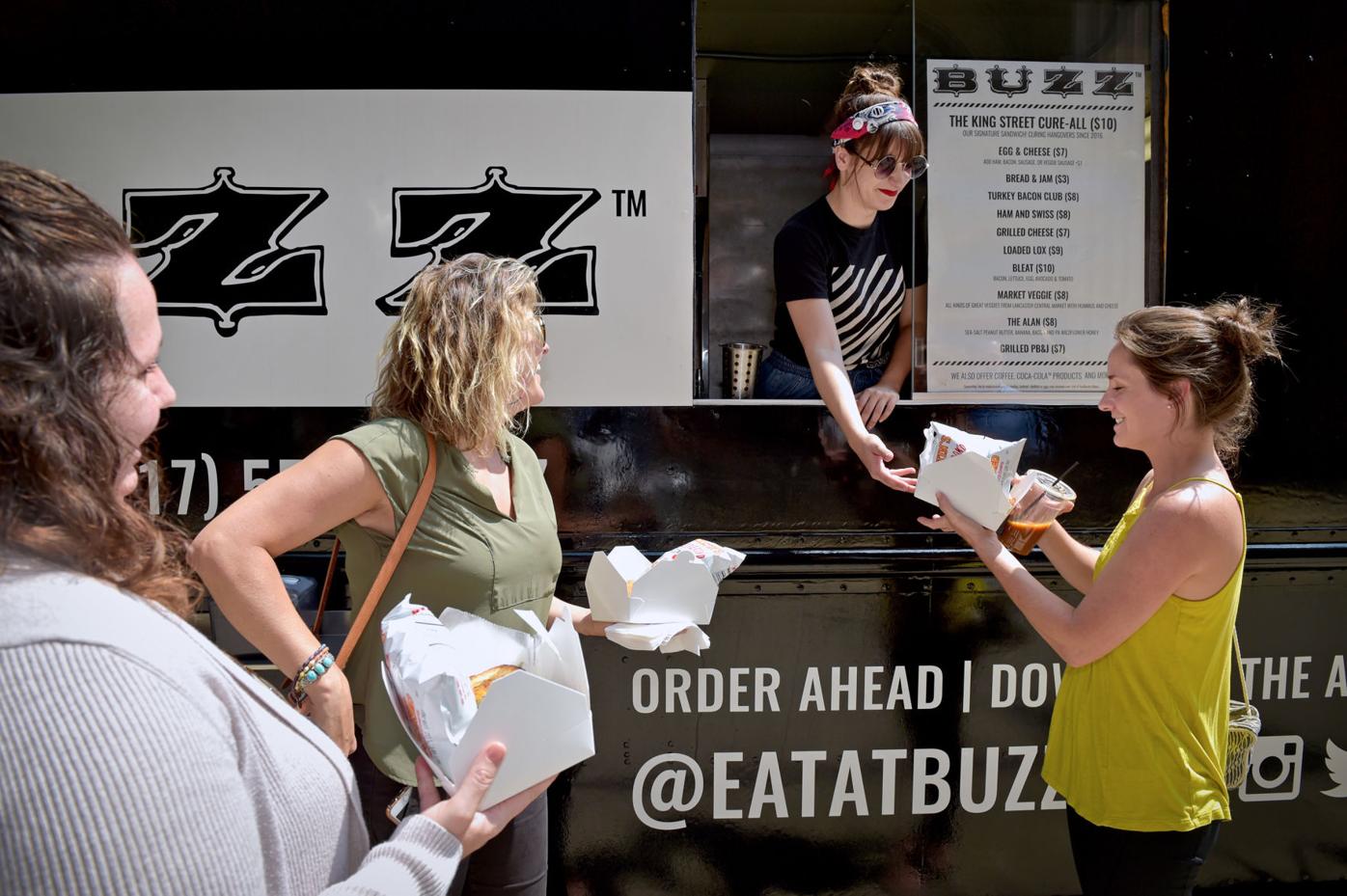 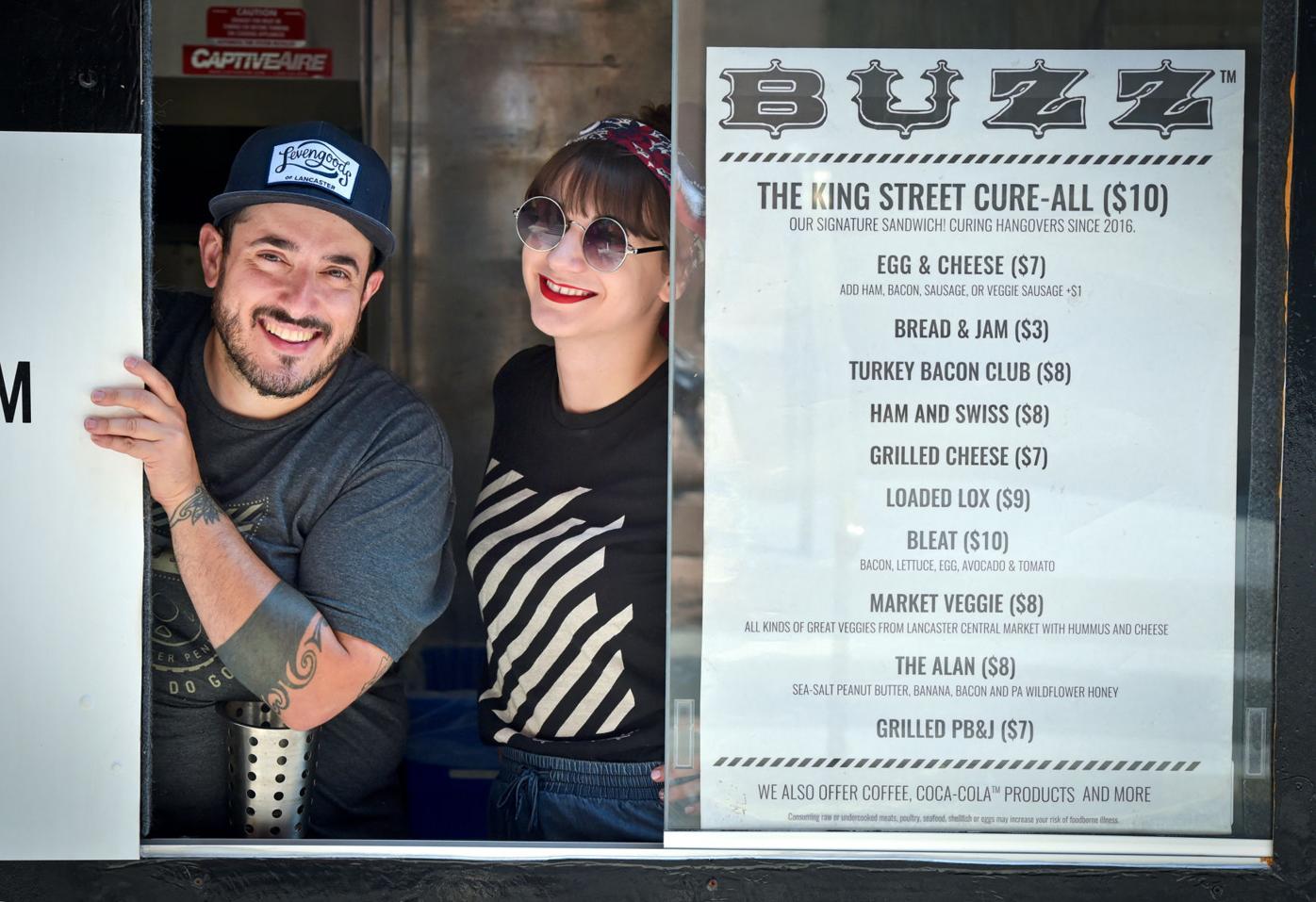 In the Buzz food truck is Michael Sirianni and Emily Meola. Wednesday, August 15, 2018 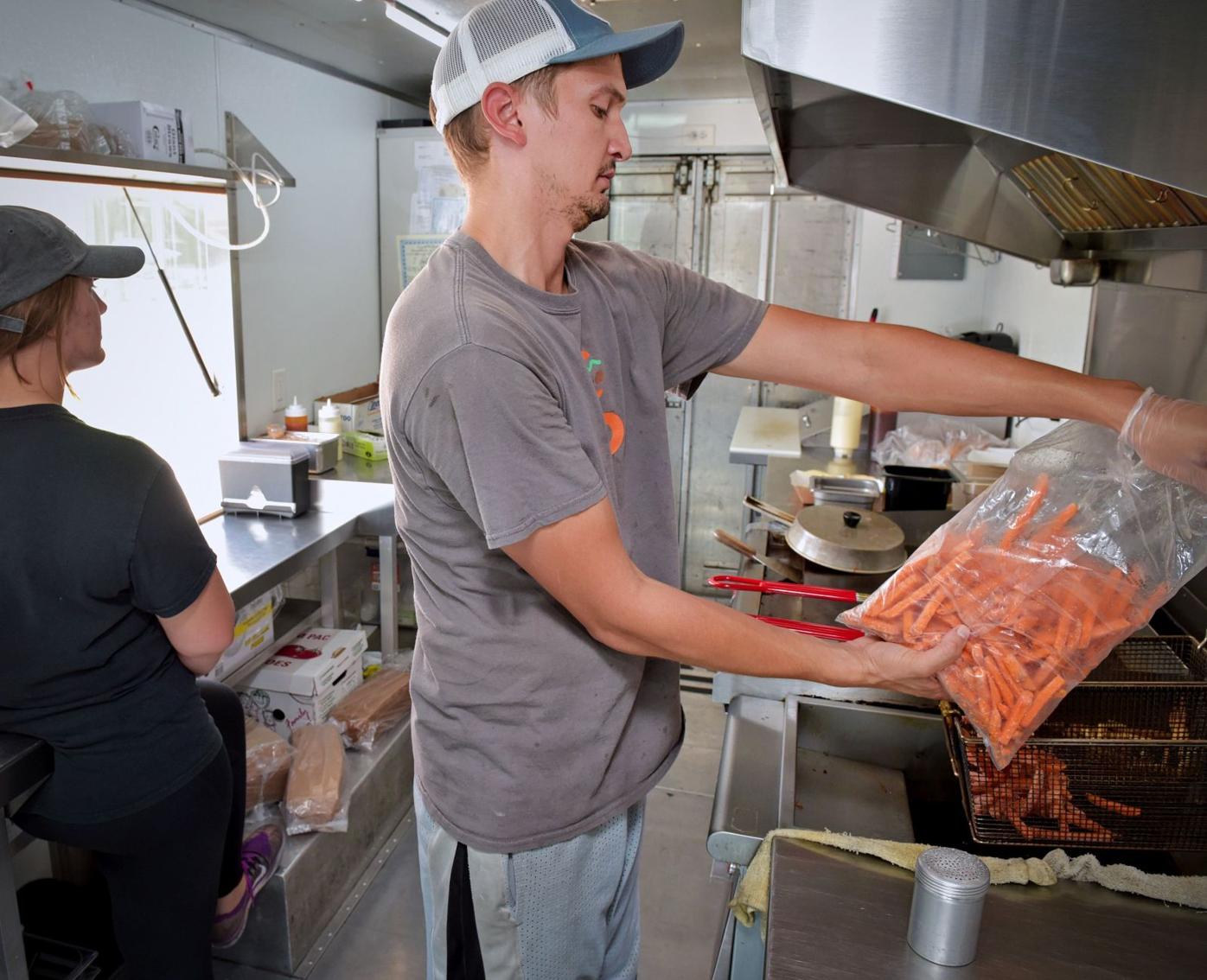 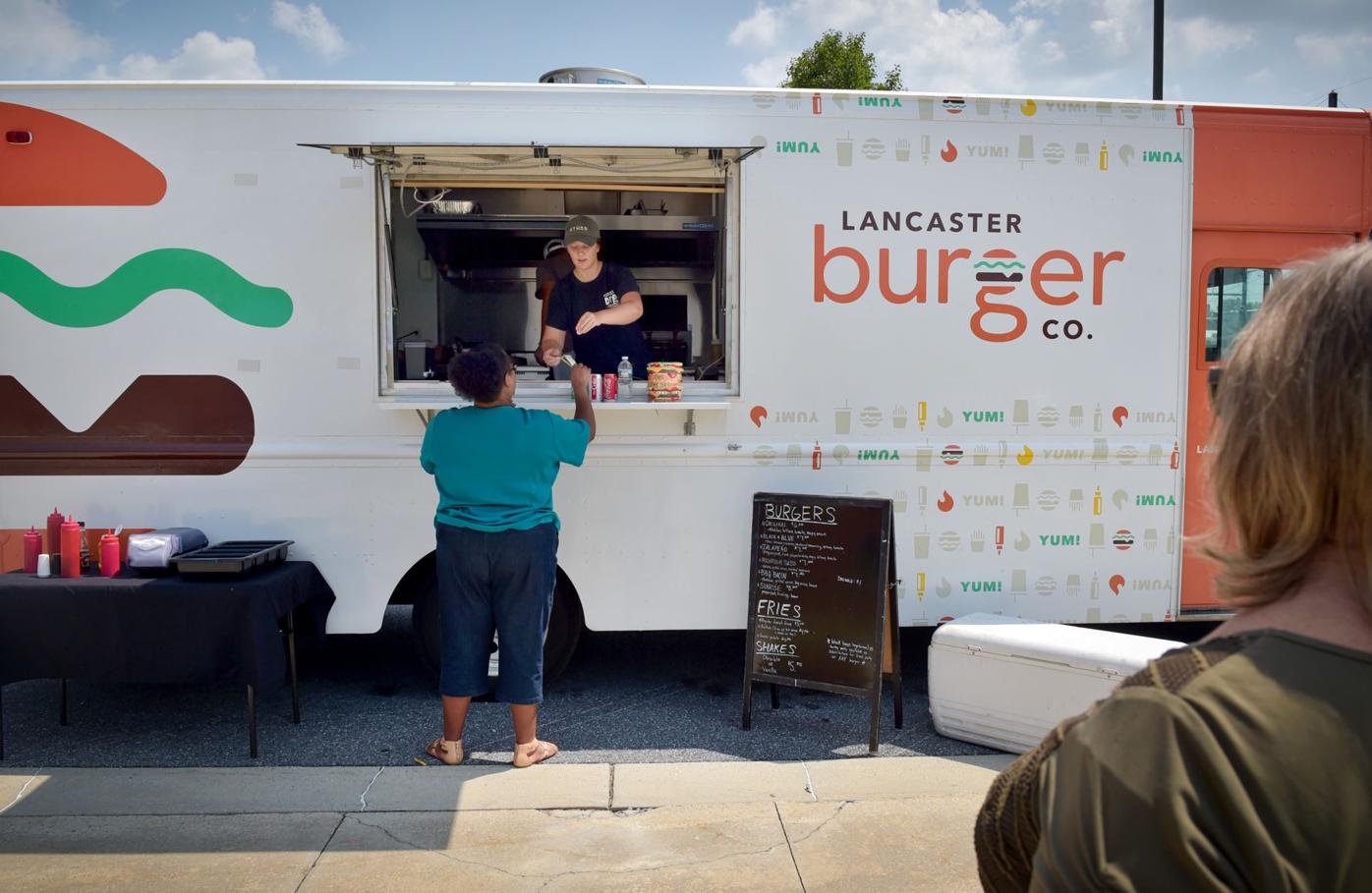 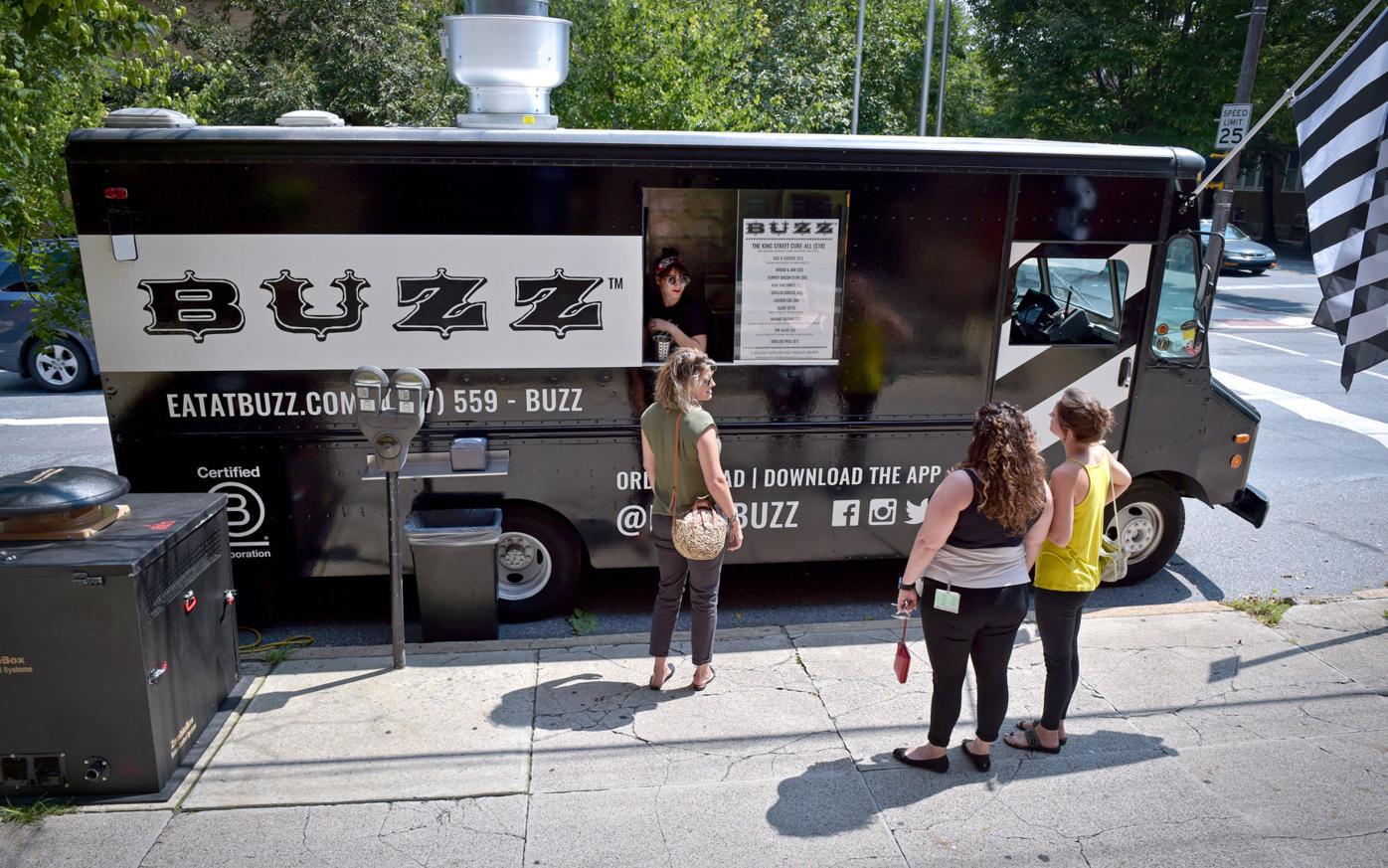 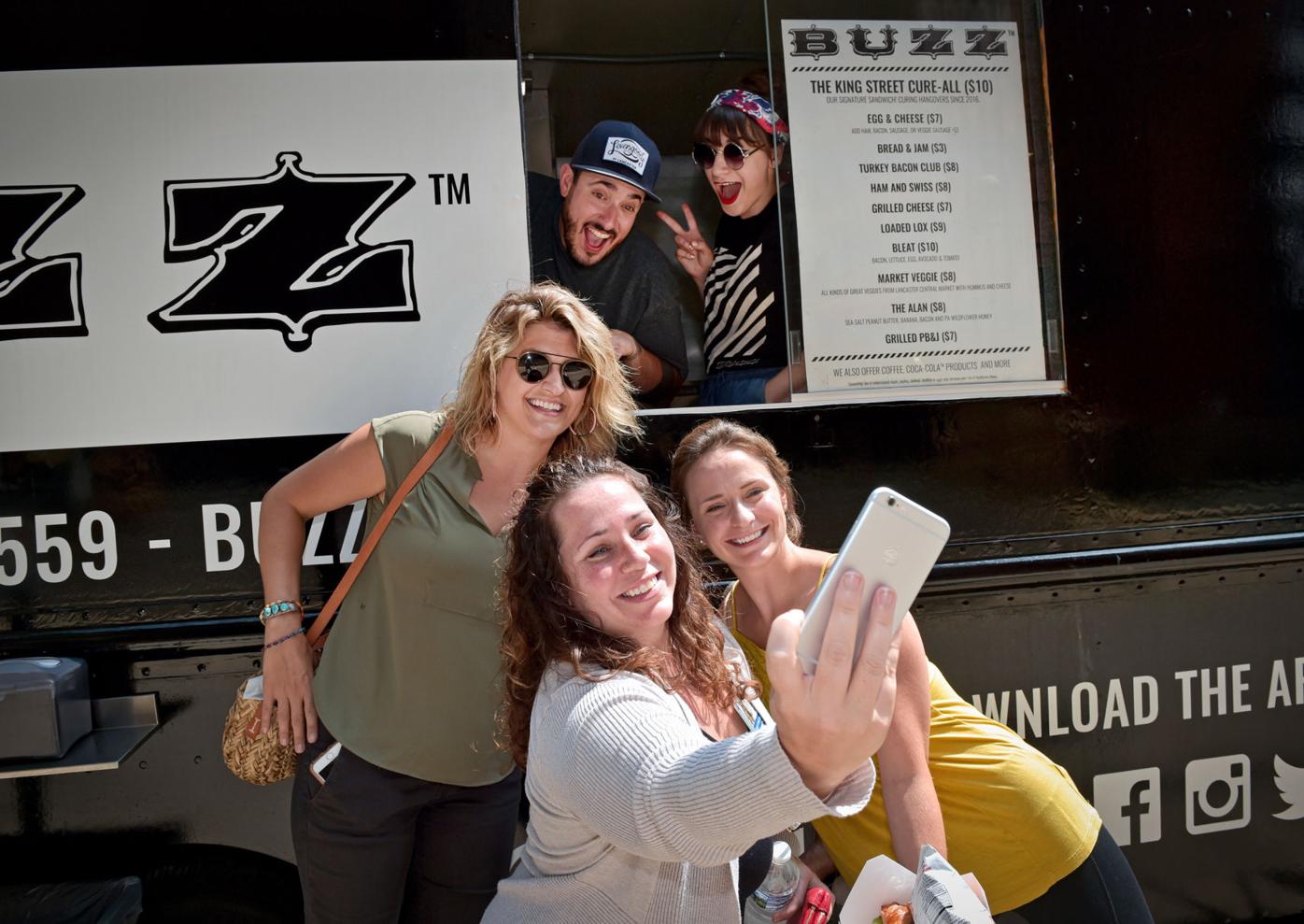 Posing for a selfie at the Buzz food truck are customers left to right, Anna Ranck, Alison Fritz and Emily Fritz. In the truck window are Michael Sirianni and Emily Meola. Wednesday, August 15, 2018

In the Buzz food truck is Michael Sirianni and Emily Meola. Wednesday, August 15, 2018

Posing for a selfie at the Buzz food truck are customers left to right, Anna Ranck, Alison Fritz and Emily Fritz. In the truck window are Michael Sirianni and Emily Meola. Wednesday, August 15, 2018

On a recent weekday, sisters Emily and Alison Fritz and their friend, Anna Ranck, met up at the corner of North Duke and East James streets to order lunch at the Buzz food truck.

“It’s fantastic,” Emily Fritz said as they waited for their sandwiches. Food trucks like Buzz, she said, “bring really great vitality to the food culture here in Lancaster.”

Said Ranck, who recently returned to the area after living in Brooklyn: “I’m very glad there are places like this here.”

By the numbers: U.S. food trucks

Food trucks are a booming business these days. There are more than 4,000 enterprises employing more than 14,500 people nationwide, according to research firm IBISWorld, and the industry is closing in on $1 billion in annual revenue.

Not all are based here; food trucks in central Pennsylvania tend to do business throughout the region.

He operates four or five days a week, he said, generally staying within 45 minutes to an hour’s drive of Lancaster. Events make up 80 percent to 90 percent of his business, he said: weddings, parties, corporate lunches and so on.

“You name it, I’ve provided food for it,” he said.

Michael Sirianni's Buzz food truck also does a lot of business at events. But he’s also pushing to make food trucks an accepted everyday part of the local food landscape, the way they are for many big cities and college campuses.

Earlier this year, he asked City Hall if there were a block where multiple food trucks could gather. Officials suggested West Vine Street by Southern Market Center.

Sirianni now sets up there twice a week at lunchtime. He’s seeking other operators to join him, hoping to build a food truck destination, the “West Vine Roundup.”

He also parks twice a week at the Duke/James intersection, near Lancaster General Hospital.

Mayor Danene Sorace’s chief of staff Matt Johnson said the administration welcomes the growth of food truck culture and wants to encourage it.

“We love food trucks,” he said.

Buzz is a B Corp., meaning that giving back to the community is part of its business plan.

Running a food truck is hard work, Sirianni and Smoker said. Not only is it physically demanding, Sirianni said, there’s more planning involved than there is for a restaurant. You have limited space, and if you forget something, that’s one less thing you can sell that day.

Food trucks must comply with state food safety rules. Municipalities can choose to regulate them as well, and more are doing so.

Lancaster passed its food truck ordinance in 2013. Ephrata is in the process of developing one, borough manager Robert Thompson said.

In Lititz, food trucks are allowed in the borough park for special events, said Elijah Yearick, director of planning and community development.

The borough’s elected officials have “not looked favorably” on licensing food trucks apart from that, he said, with one exception: Rosey’s Lunch, a food trailer that has become a beloved local tradition.

It predates the “peddlers, canvassers and solicitors” ordinance that Lititz applies to food trucks, so it’s grandfathered in, Yearick said.

Regulations can profoundly affect how the industry develops in a given city, National Food Truck Association President Matt Geller said.

Localities that focus on protecting public health and safety “are doing what they’re supposed to,” he said. But governments shouldn’t try to exert control beyond that, he said.

In particular, he said, they shouldn’t try to shield brick-and-mortar restaurants from competition.

Each community seems to have its own style of food trucks.