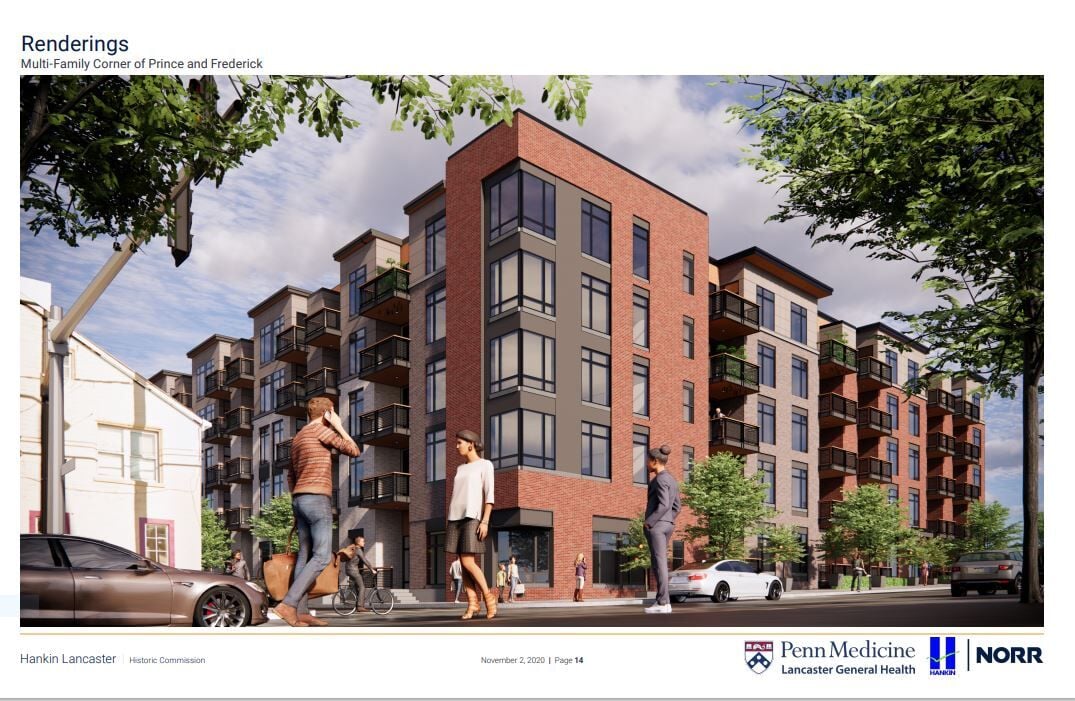 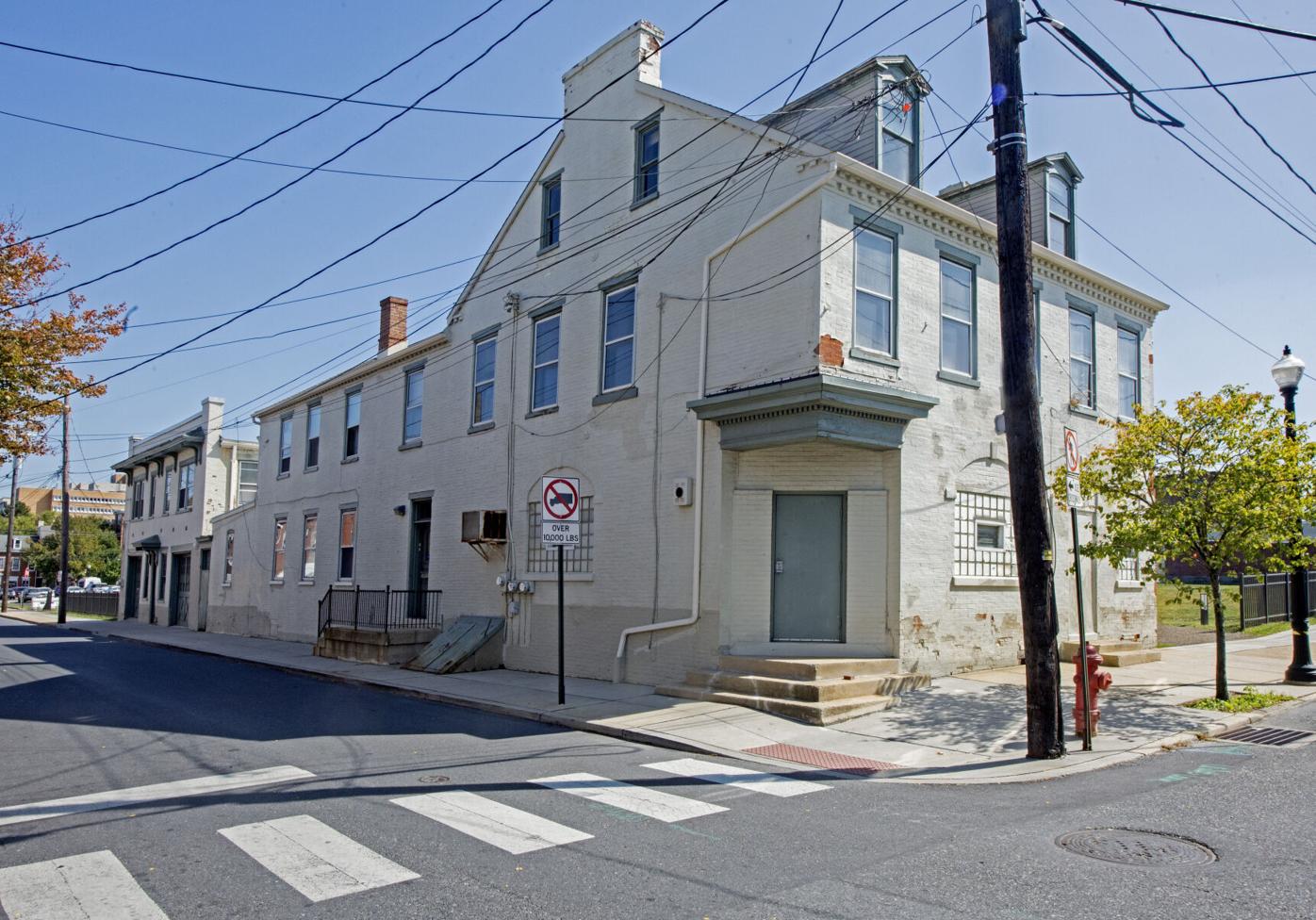 This historic former tavern at North Prince and West Frederick streets and an adjoining carriage house would have been razed as part of the original redevelopment plan for former Lancaster Family YMCA property. 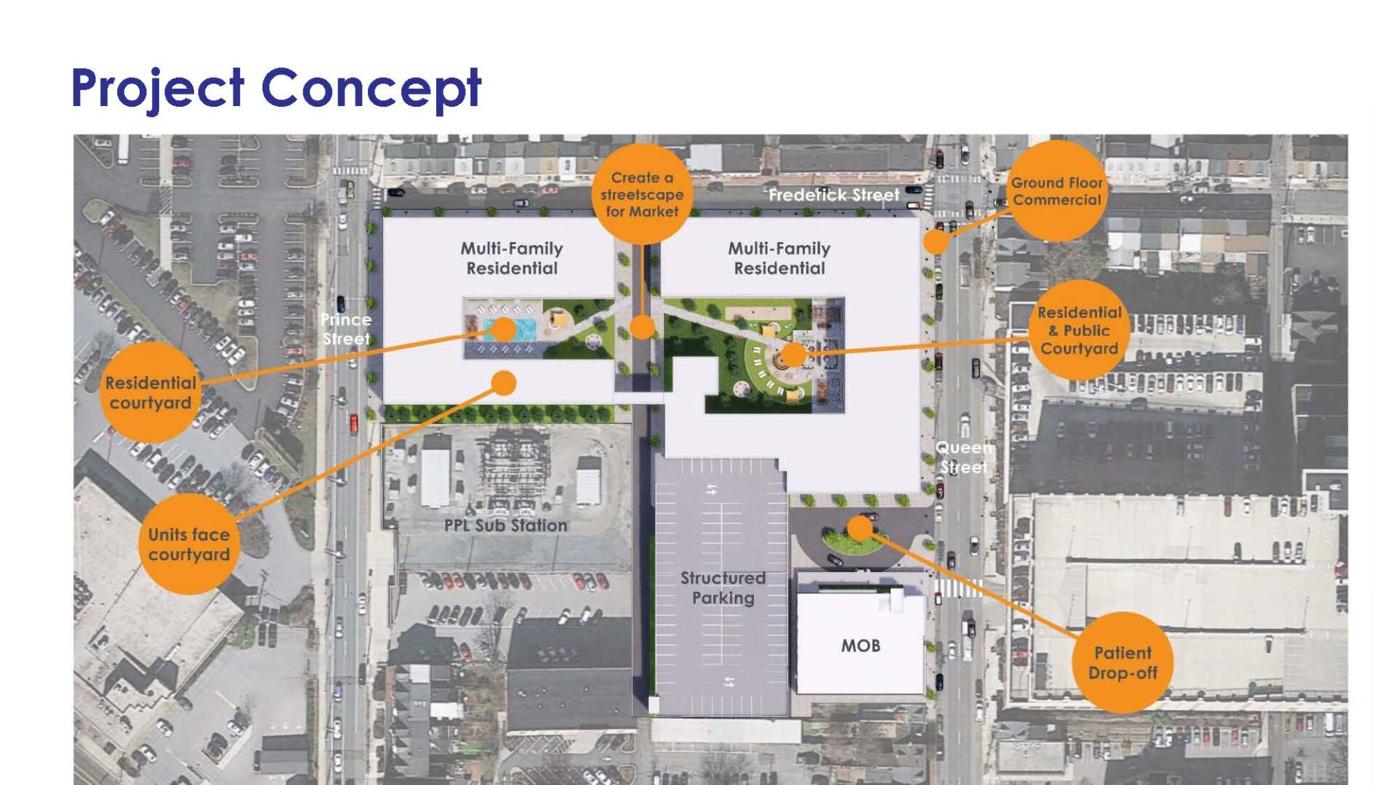 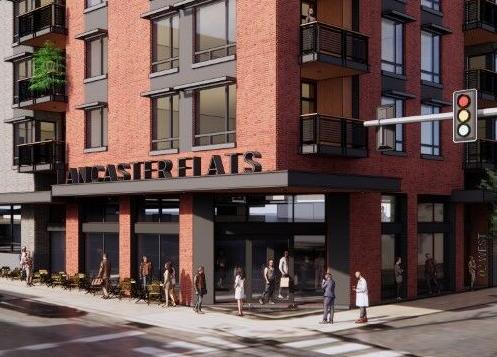 This rendering shows a five-story apartment building being proposed at North Queen and West Frederick streets. The name "Lancaster Flats" is merely a placeholder. Its actual name has not been selected.

This historic former tavern at North Prince and West Frederick streets and an adjoining carriage house would have been razed as part of the original redevelopment plan for former Lancaster Family YMCA property.

The members of the city Historical Commission raved Monday about the proposed redevelopment of the former Lancaster YMCA site into apartments, offices, small stores and restaurants.

But the commission members also expressed a fondness for a historic tavern and a historic carriage house next door on West Frederick Street that the developers want to raze.

So, after two hours of discussion, land owner Lancaster General Health and its partner, developer Hankin Group, reluctantly agreed to prepare an alternative proposal that would include the historic buildings, as required by a city ordinance.

With a strong nudge from the commission, the partners will look at shifting the 15 or so apartments they want to build where the two old buildings now stand to somewhere else on the site, perhaps by adding a sixth floor to the project.

“We will sharpen our pencils and see what we can do,” said Neal Fisher, vice president of development for Exton-based Hankin.

While insisting they must raze the tavern (built in 1868 and most recently home to Bob's Cafe) and the carriage house (built in 1917) for the project to make financial sense, LG Health and Hankin Group intend to bring their alternative proposal to the commission at its Dec. 21 meeting.

Should $60M revitalization of ex-YMCA site in Lancaster city include saving 1868 tavern?

All four members of the public who spoke at the meeting were in favor of preserving the historic structures.

One of them, Gloria Mast, a travel consultant in City Visitors’ Center on Penn Square, told the development team:

“You sound like very creative people who are highly trained. I don’t think integrating a historic building into your design should really pose that much of a challenge.” She added that doing so would be in line with the city motto, “A City Authentic.”

The project location, a 3.5-acre parcel bounded by North Queen, North Prince and West Frederick streets, has been owned by LG Health since 2003. LG Health and Hankin Group began pursuing city approval of their redevelopment plan earlier this year.

As the partners told the commission at the September meeting, the plan calls for a medical office building of 30,000 square feet for LG Health plus 230 to 250 apartments, a 5-level parking structure with 440 spaces, as well as restaurants and small stores.

The partners have declined to disclose a project cost, but judging from other projects here with similar elements, it appears the cost would be about $60 million.

Because the property is in the city’s Historic Conservation District, demolition requests go through a two-step review – first by the commission, which takes an advisory vote, then to City Council, which has final say.

LG Health and Hankin Group did not present any of that. Instead, they reviewed what the project entails and the building materials they’ve selected, described how they tweaked the design in response to earlier feedback from the commission and laid out the economic upside of the venture to the city, the health system and School District of Lancaster.

Among them are an increase in annual tax revenue of $664,000 for the city and $1.44 million for the School District of Lancaster, the creation of 120 permanent jobs and improved access to medical care for the community. The project also will be a catalyst for more economic development in the neighborhood and assist LG Health in its efforts to attract and retain employees, the partners said.

When commission chair Christopher Peters asked about the demolition, the project’s historic consultant, David Schneider, replied that saving the two buildings “… reduces the footprint of the site enough that it doesn’t make the project feasible anymore.”

The commission members made clear that they were expecting much more detail on that topic.

“The ordinance requires the applicant to provide evidence…,” answered commission member Steve Funk. “We can’t just take you at your word.”

The developers kept reiterating that keeping the buildings would make the venture a financial loser, contending they need the revenue from the apartments earmarked for the footprint of the historic buildings to make their venture profitable.

“The project barely works now,” Fisher said. “The numbers will show the project is not viable based on saving the tavern.”

Brian Burgess, LG Health’s chief strategy officer, echoed that view. “If we take that corner out, … the yield on the site would go down significantly.”

Fisher also pressed the commission to vote on the issue Monday, suggesting it be done on a conditional basis, adding that the lack of resolution was preventing the project design work from progressing.

“We’re really at a point in our design where everything is contingent upon demolition. … We’re kind of stuck. We need to move forward,” he said.

But commission members as well as Suzanne Stallings, the city’s historic preservation specialist, kept pointing to the requirements of the ordinance. Stallings had alerted Hankin to that provision twice before the meeting too.

Funk added, “Maybe I’m coming off as a (stickler), pardon the expression, but I really do like the project. … I just need more (information) before I can vote on it.”

Commission member John Spidaliere wondered whether the tavern -- “for many, many years … an integral part of the community” -- could be woven into the redevelopment much like the historic Montgomery House was made part of the Lancaster County Convention Center.

Funk suggested adding a sixth floor to the project’s North Queen Street side, saying that the extra space could become the apartments initially earmarked for the footprint of the historic buildings on West Frederick Street. That way, saving the two buildings would not eliminate new apartments.

When Fisher questioned whether the city would support that tall a building, Funk noted that city officials recently endorsed a 16-story apartment building being proposed at North Queen and West Chestnut streets.

Ultimately, the commission voted 7-0 to table the developers’ request for permission to raze the two buildings. The motion included a request for the developers to come back with an analysis of saving the two buildings, on the west side of the project, and shifting the 15 or so apartments earmarked for that location to the east side of the project.

Coatesville Savings Bank, with three of its five offices in eastern Lancaster County, announced Tuesday it has changed its name to Prosper Bank.

City’s structural deficit is not sustainable [Special from Mayor Sorace]

Over the last five mayoral administrations in the City of Lancaster, a lot has changed, but four things have remained the same: