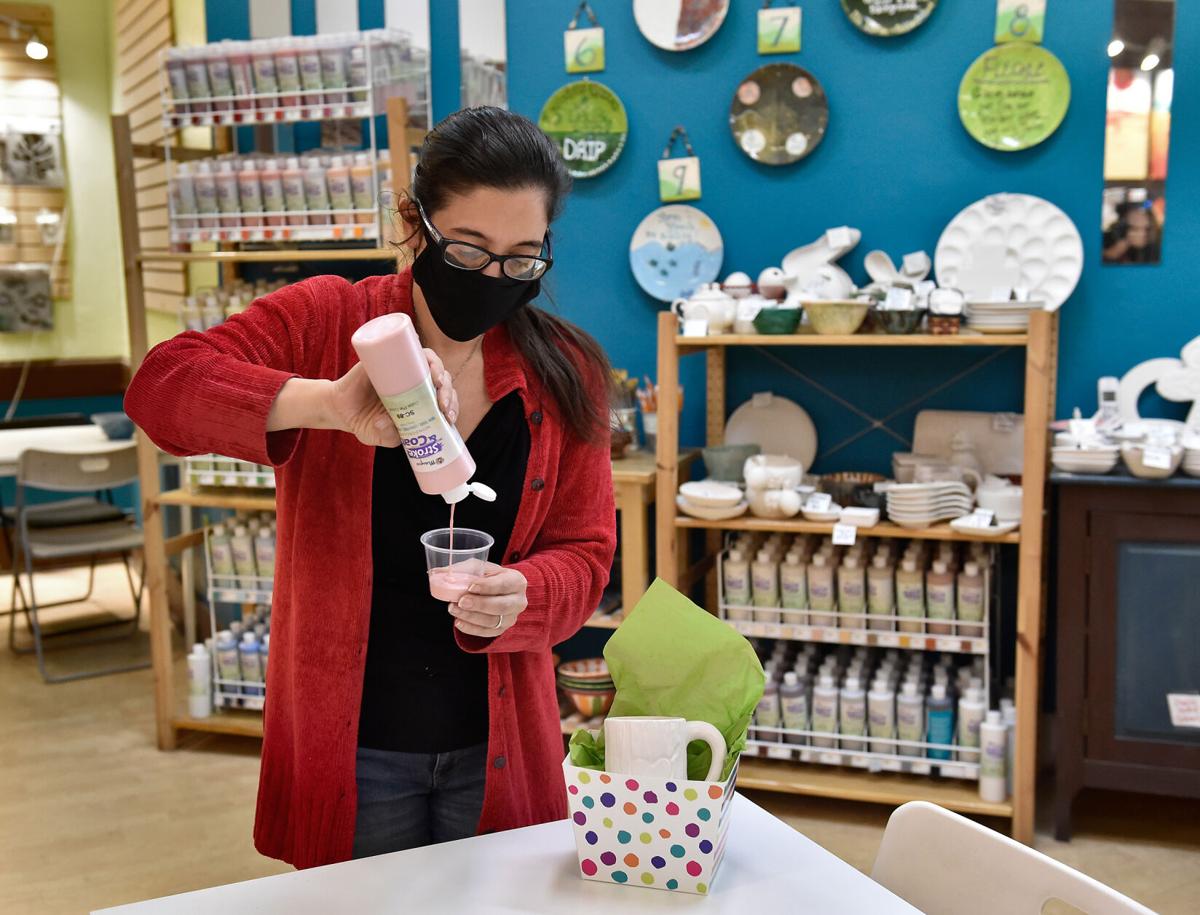 Marcie Natale of the Pottery Works prepares a gift basket on Monday, November 2, 2020. 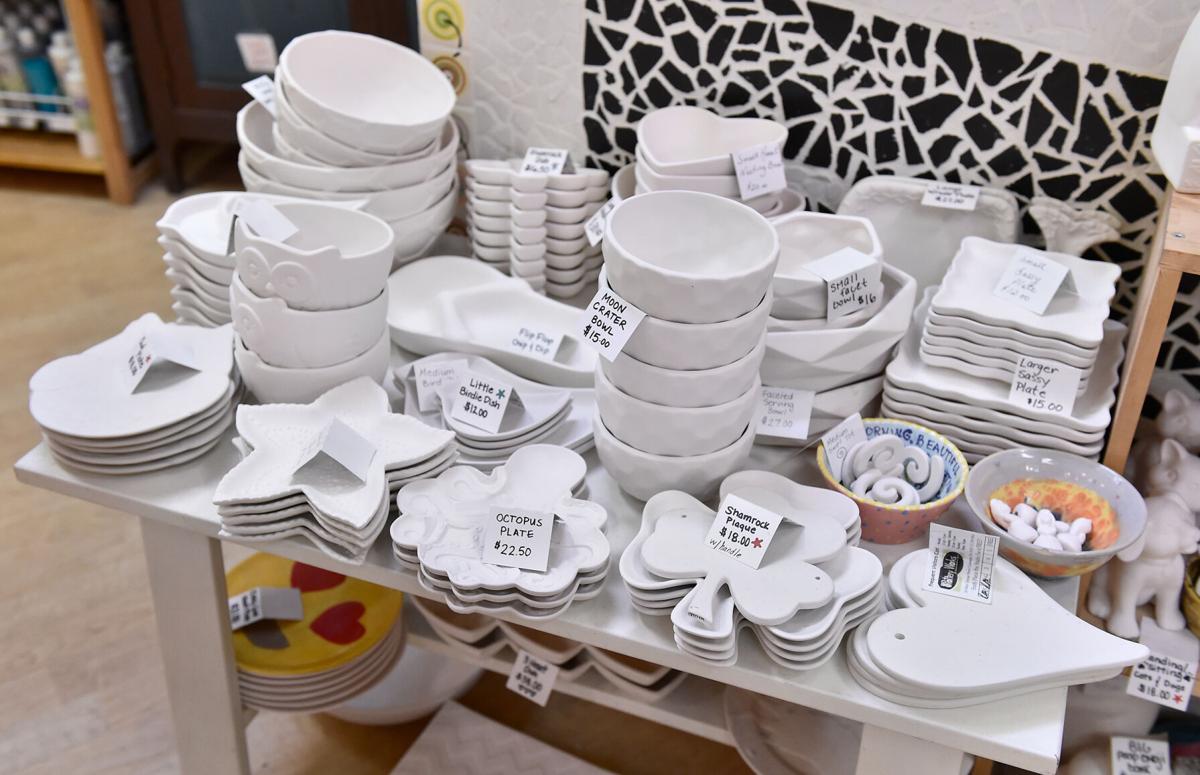 Marcie Natale of the Pottery Works prepares a kit to-go or a gift basket on Monday, November 2, 2020. 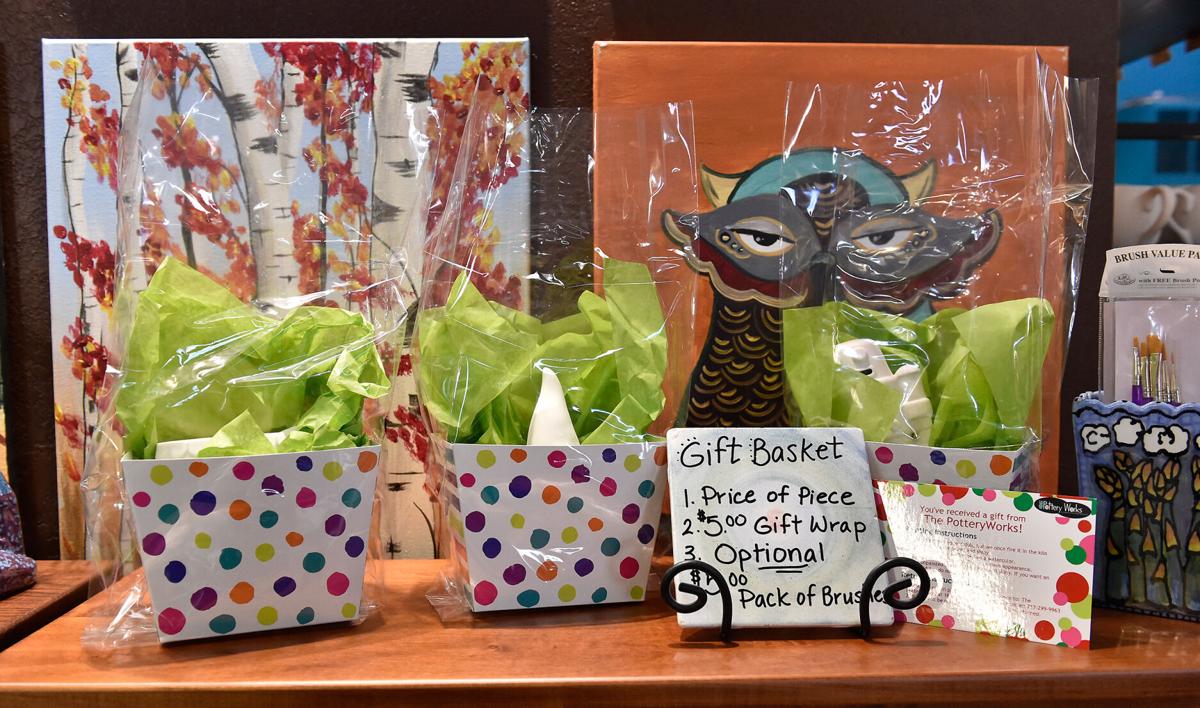 The Pottery Works has gift baskets and to-go kits to take home and when the products are painted, they are brought back to be fired in the kiln on Monday, November 2, 2020.

Marcie Natale of the Pottery Works prepares a gift basket on Monday, November 2, 2020.

Marcie Natale of the Pottery Works prepares a kit to-go or a gift basket on Monday, November 2, 2020.

The Pottery Works has gift baskets and to-go kits to take home and when the products are painted, they are brought back to be fired in the kiln on Monday, November 2, 2020.

Marcie Natale logged a lot of miles this year. “There was one day when I did something like 37 to 40 deliveries. I guess some of them were pickups,” says Natale, owner of The PotteryWorks in downtown Lancaster. “I was driving everywhere, all over the county.”

The early, spring days of the pandemic had Natale feeling a bit like a pizza delivery driver. But she had to do what she had to do. To keep her paint-your-own-pottery store afloat, Natale needed to transport bisque pieces, paints and borrowable brushes to customers who wanted to do projects at home.

That’s just one example of how business owners are getting products to customers who aren’t comfortable coming to them.

Upgrading websites is another way many have opted to do so. That includes Kathy Frey, owner of Lancaster’s Festoon Boutique.

“When we initially put up our online presence we kept it small and tight, showcasing just our locally made products and not really showing the full scope of what we’re all about,” she says.

“After we realized people were going to be spending a whole lot more time at home, we knew it would be very important to up our game,” Frey says.

Festoon now has a website that Frey says reflects the variety, attention to detail and organization that she emphasizes in store.

“Now we virtually have hundreds of products and it has become very successful,” she says. “We are thrilled to see people not only supporting us through brick-and-mortar shopping, but through online shopping, too.”

That hasn’t come without cost.

“It has been a lot of hard work,” Frey says. “But being in small business is never easy and you have to be willing to put in the effort.”

Natale hasn’t made the jump to online shopping carts at The PotteryWorks or its sister stores, The Beadworks and The Gem Den. But her staff has this year spent many hours photographing inventory — piece by piece and gem by gem — to make it easier for those who are browsing websites from home to decide what to order by phone.

At Chapel Hill Forge in Conestoga, Mandy Leggett had the website redone for the business that she runs with her blacksmith husband, Zad.

They’d already been selling online through Etsy but had done a good chunk of their 2019 business at craft fairs. With those off the table in 2020, Zad took a part-time job to supplement the family’s income. He’s been following hot air balloons and collecting those when they land.

Mandy has been working with a SCORE counselor to nail down more concrete online marketing plans.

The Leggetts also dug into their savings to buy a $6,000 engraver and are now using that to crank out items like $14 or $15 ornaments.

“We needed to offer some more low-hanging fruit. A lot of our stuff is expensive. It takes Zad a long time to make,” Mandy Leggett says. “People really do want to support small businesses. But they don’t necessarily have $100 right now to do it.”

She’s also refocused her business’s blog around homesteading, a topic that has gained the forge more attention.

Christy Lapp, owner of C.R. Lapp’s restaurant in Quarryville, had some attention-attracting inspiration while on a visit to his son’s new home in Maine. He bought some fresh-from-the-ocean lobsters that were packaged live for his drive back to Pennsylvania.

“I thought maybe I’ll take some of these and try them in the restaurant,” he says. “The first trip I brought about 30 back. We sold out in two hours.”

Lapp decided to make another trip early this month and promoted that lobster trek on the Facebook page for the restaurant where the menu more typically includes items like burgers, spaghetti, tuna melts and grilled beef liver.

“This time we sold 70,” he says. “It was something different. Something to get people excited.”

Some takers dined on the lobster in the restaurant where Lapp this year installed booth dividers. Others took their lobster dinners to go.

Lapp says he must continue thinking outside the box to find ways to cater to both crowds.

“And we bought some new packaging … something to make it more attractive for customers when they pick it up,” Lapp says.

Sparrow has during the pandemic been offering $500 launch kits for businesses who realized this was the time to take the online plunge, Rule says.

“I don’t know how anyone can be planning for 2021 without being online,” he says. “The uncertainty of the times has not gone away.”

He said he’s seeing two types of business owners in 2020. One is holding tight, waiting and hoping that things return to the way that they were when business was good.

Rule holds more hope for survival for the others.

“There are the ones who are saying, ‘I don’t know what tomorrow holds but I’m going to give it my best shot until I can’t anymore,’ ” he says. “That person is moving forward, trying new things.”

Nina Coleman’s maternal grandparents have run a gift shop in the beach town of Ocean Grove, New Jersey, for practically her entire life. The 1…

Tracy Blake stood courtside, a face mask tucked under her chin, cheering on her 12-year-old daughter, Ciana, during a recent tournament at Spo…

Pennsylvania has reached 351,667 total COVID-19 cases to date, an increase of 8,053 from Friday's count, according to the Pa. Department of Health.

There were several changes to the retail scene in Lancaster County during the month of November.

For many seniors, the years after retirement are an opportunity to work in volunteer positions and give back to the community.