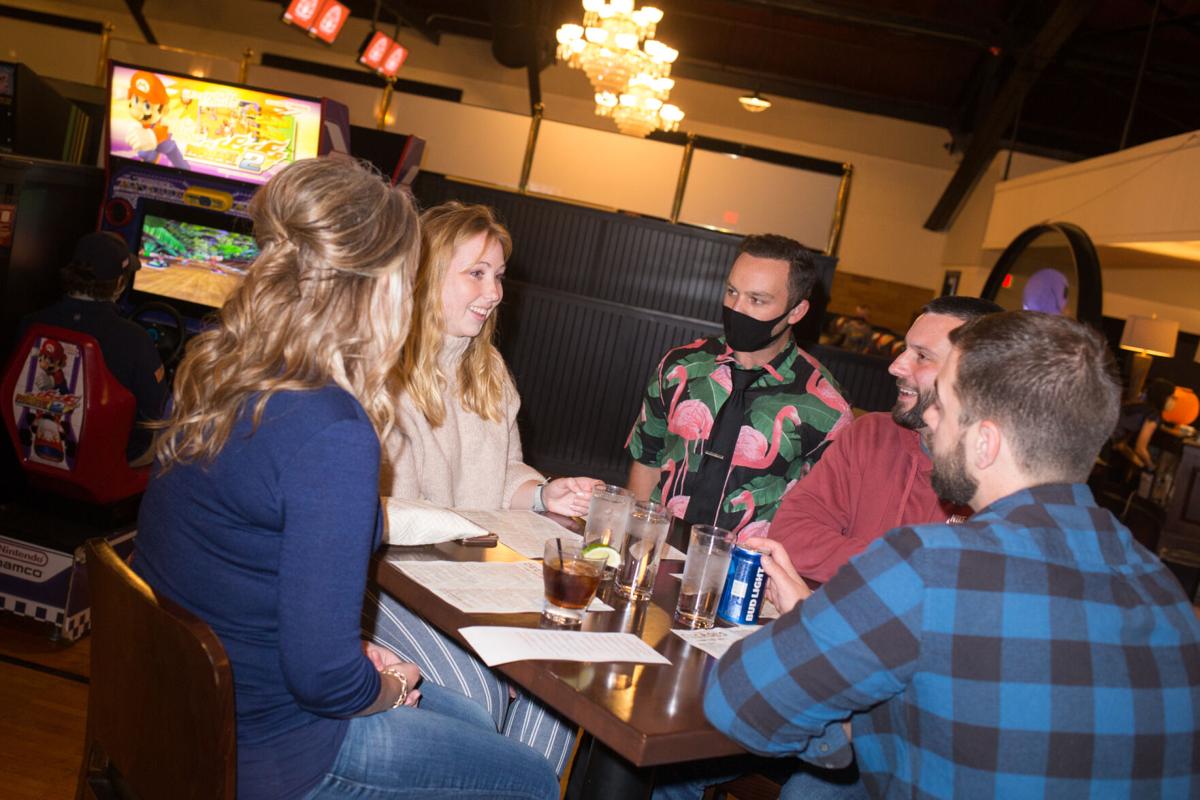 From left, Heather Hartranft, Willow Dimm, Nick Weidinger, and Jon Keifer talk to bartender Scott Meinzer, standing, at Decades Lancaster in Lancaster, Pa., on Wednesday, Nov. 4, 2020. "I haven't been out in town in a long time," said Keifer. 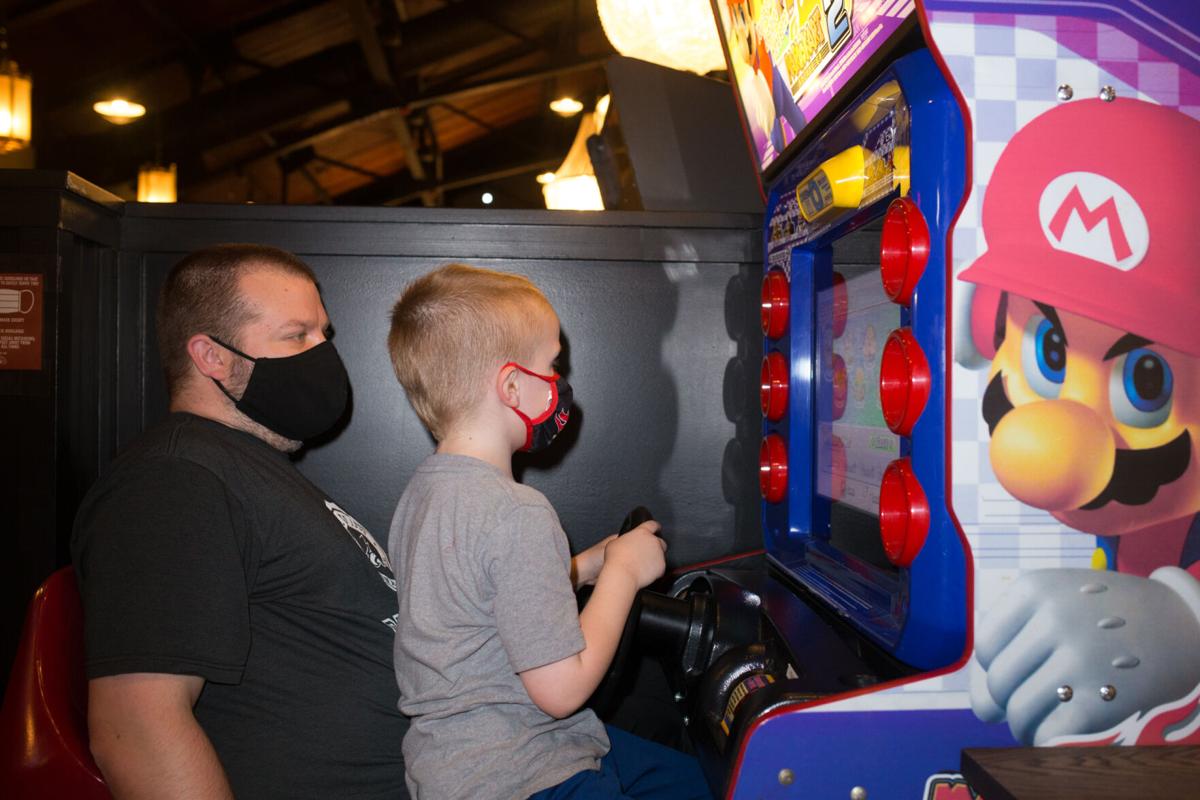 Matt Bruninghaus and Myles Bruninghaus, 6, of Shamong, N.J., play a racing game in the arcade of Decades Lancaster in Lancaster, Pa., on Wednesday, Nov. 4, 2020. The family was visiting Lancaster on vacation for Matt's birthday. 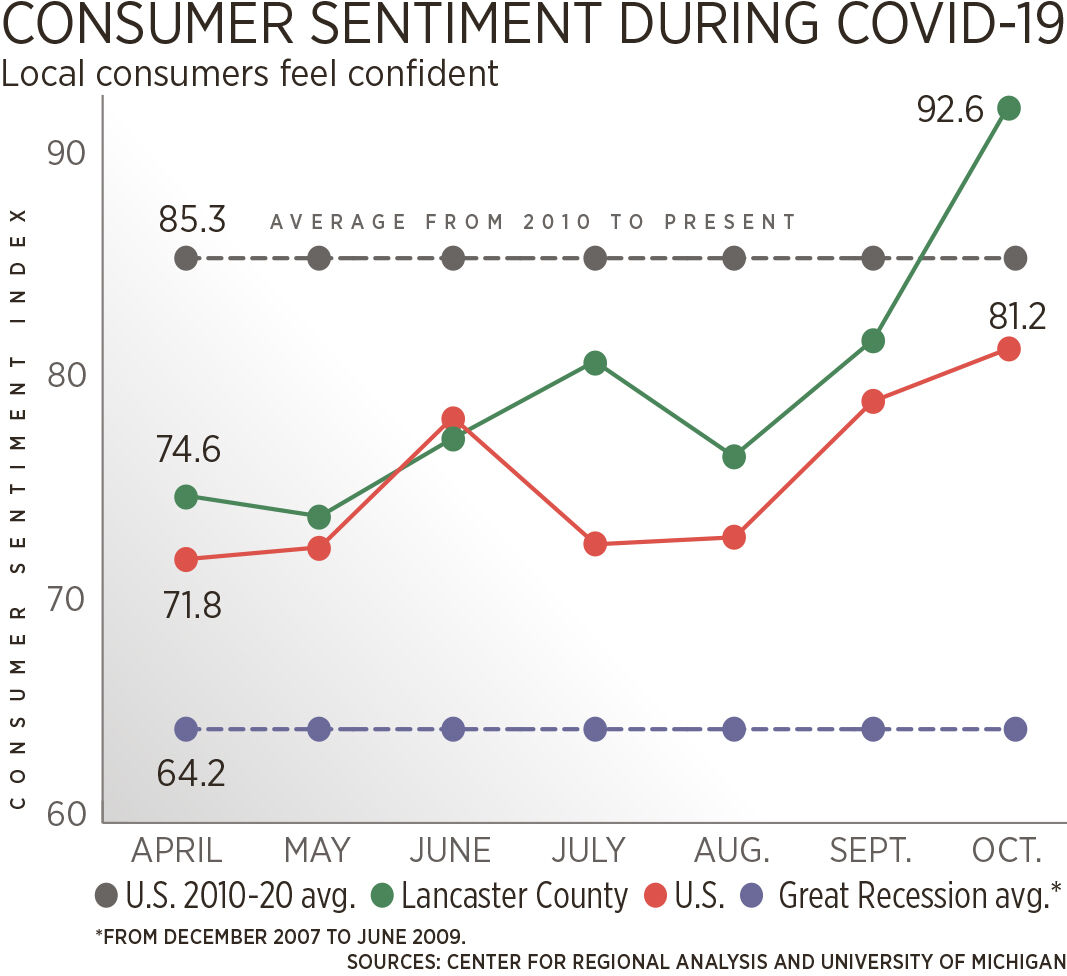 Nearly eight months into a global pandemic that has delivered unprecedented shocks to the economy and is showing signs of renewed strength, Rick Abel says his roofing and siding crews are busier than ever.

“We have a boom going on. We have more jobs to do this time of year than I did last year, and that was our best year in 28 years,” said Abel, owner of Elizabethtown-based Abel & Son Roofing and Siding, which works with residential customers.

Abel believes the surge is due to consumers feeling increasingly financially secure and greater interest in home improvements as people spend more time at home due to the pandemic. Stimulus checks that were part of the federal coronavirus relief bill also helped, he said.

“Right now I would add another roofing crew -- even this time of year going in to winter,” he said.

Fewer Lancaster Countians getting unemployment benefits, but not because they found work

Seeing customers so willing to invest in their homes has left Abel feeling “quite optimistic” about the local economy. Abel’s optimism, as well as consumers’ growing willingness to spend, is reflected in the latest Lancaster County consumer sentiment measure compiled by the Economic Development Company of Lancaster County’s Center for Regional Analysis.

“Consumer sentiment rose sharply in October for Lancaster County residents,” EDC reported of its most recent numbers. “The rise was far stronger than results from the national (consumer sentiment) survey, signaling Lancastrians expect the local recovery to be stronger and faster than the nation.”

What the report says

Based on an online survey of Lancaster County residents that draws as many as 1,000 responses each month, in October the index “shot up to 92.6. The 11-point gain returns confidence to pre-COVID levels for the first time since April,” according to the EDC report.

The Lancaster County measure far exceeded the October national index of 81.2. And it jumped so much last month that it reached levels of national surveys of consumer confidence taken before the pandemic. For example, the University of Michigan measure of consumer sentiment, which the local survey is designed to mimic, was 89.1 in March and it ranged between 93.2 in September 2019 and 101 in February 2020.

For Lancaster County, the survey indicates that consumers will continue to drive a strong recovery, even as worries about the national economy could hold it in check.

“While October’s results are promising, county respondents point to concerns over future policy decisions at the national and local levels and the growing number of COVID cases across the nation,” according to the report.

Continuing uncertainty about the coronavirus will be another headwind, according to the report.

“While October’s results offer hope, poll results point to the importance of policy decisions and public health outcomes in determining if this level of confidence will be sustained over the coming months,” the report says.

The LNP Media Group in partnership with EDC’s Center for Regional Analysis began measuring consumer confidence in April. The poll is conducted the first week of every month and reflects only Lancaster County residents. It is modeled after a survey conducted by the University of Michigan to allow for comparison to national results.

Consumer confidence is valuable to measure and track since it affects consumer spending, and consumer spending drives nearly 70% of the nation’s gross domestic product – the value of goods produced and services provided. It’s also a forward-looking measurement, offering insight into the direction of the economy.

Adam Ozimek, a Lancaster resident who is chief economist at Upwork, the world's largest website for freelancing, said a local unemployment rate that has fallen faster than the nation’s could be a key factor in strong consumer sentiment. Plus, Lancaster County’s economy typically outperforms.

“Given that we regularly rank as one of the highest well-being places in the country, it wouldn't be too surprising to find that consumer confidence here is generally higher overall. So as we get back to normal, we may find that normal is above average,” he said.

Fewer Lancaster Countians getting unemployment benefits, but not because they found work

Ozimek, who is an owner of Decades on North Queen Street, said he has seen some signs of consumer optimism at the restaurant and entertainment venue as more people come out, particularly for work parties or other larger gatherings.

Greg and Mary Bechtold of Millersville were considering one such get-together as they toured the venue’s bowling alley, video games section and dining areas early Wednesday evening. The Bechtolds, whose son is getting married next month, said they wanted something for a group of 40 to do after the rehearsal dinner.

“We’re going to eat, drink and maybe play some games,” said Greg Bechtold, while his wife added: “It’s kind of hard to find things during the COVID season.”

Decades general manager and part-owner Chris Trendler said that in addition seeing more such groups, there has been a slow uptick in business over the last several months. “We’ve started to see some more action, people feeling more comfortable,” he said. “We’re starting having to use our waitlist again on weekends for bowling.”

Yet there wasn’t any waiting early Wednesday evening for bowling with three of the six lanes in use. Matt and Carrie Bruninghaus and their 6-year-old son Miles had the area all to themselves. The family drove about two hours from southern New Jersey to begin their long weekend getaway in Lancaster with dinner and bowling at Decades.

“We have been here before, just not in the past eight months,” said Matt Bruninghaus, who said mask-wearing and other safety protocols helped him feel comfortable about making a return visit to the area.

Coupled with the growing optimism of Lancaster County consumers, the return of visitors like the Bruninghaus family offers some reassurance for businesses that depend on people feeling OK about spending money again. Yet even with local consumers feeling better and businesses seeing some signs of improvement, it’s still a long way back for some parts of the economy.

“Improved doesn't mean back to normal,” Ozimek said. “There is still a very long road to recovery for leisure and hospitality, both here and across the country.”

Here are the restaurants that opened, closed in Lancaster County in October 2020 [dining out]

Have your unemployment benefits for the year run out? We want to hear from you.

Have your employment benefits run out as you've searched for a job?

A self-service beer restaurant debuts next week in Lancaster city.

Foltz’s Pretzels will be closing its Lancaster shop at the end of December.

Lombardo’s reopened this week in Lancaster city after a more than $2 million renovation of the longtime Italian restaurant.