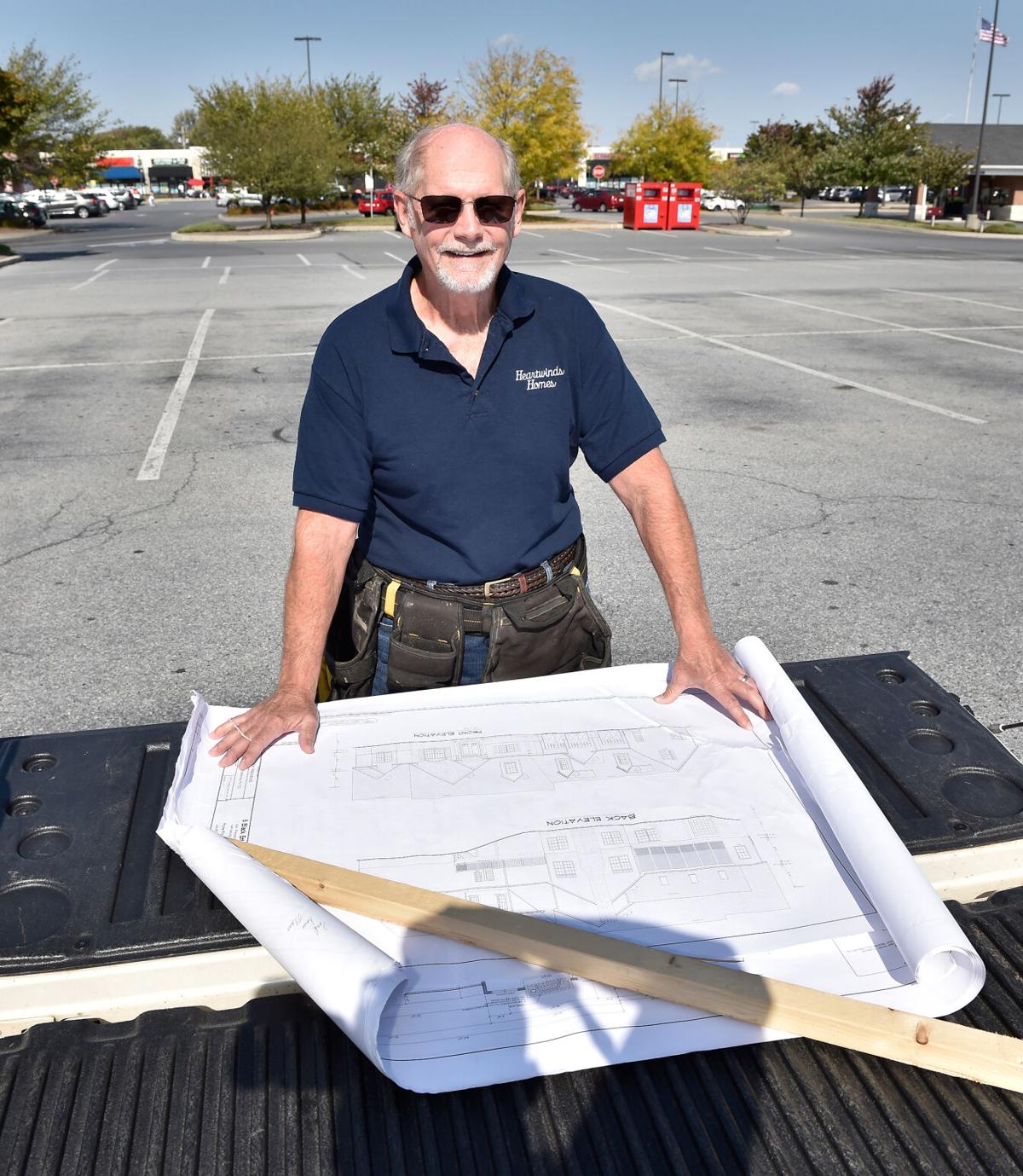 Steve Black, owner of Heartwind Homes, at the back of his pickup truck with building plans on Wednesday, October 7, 2020. 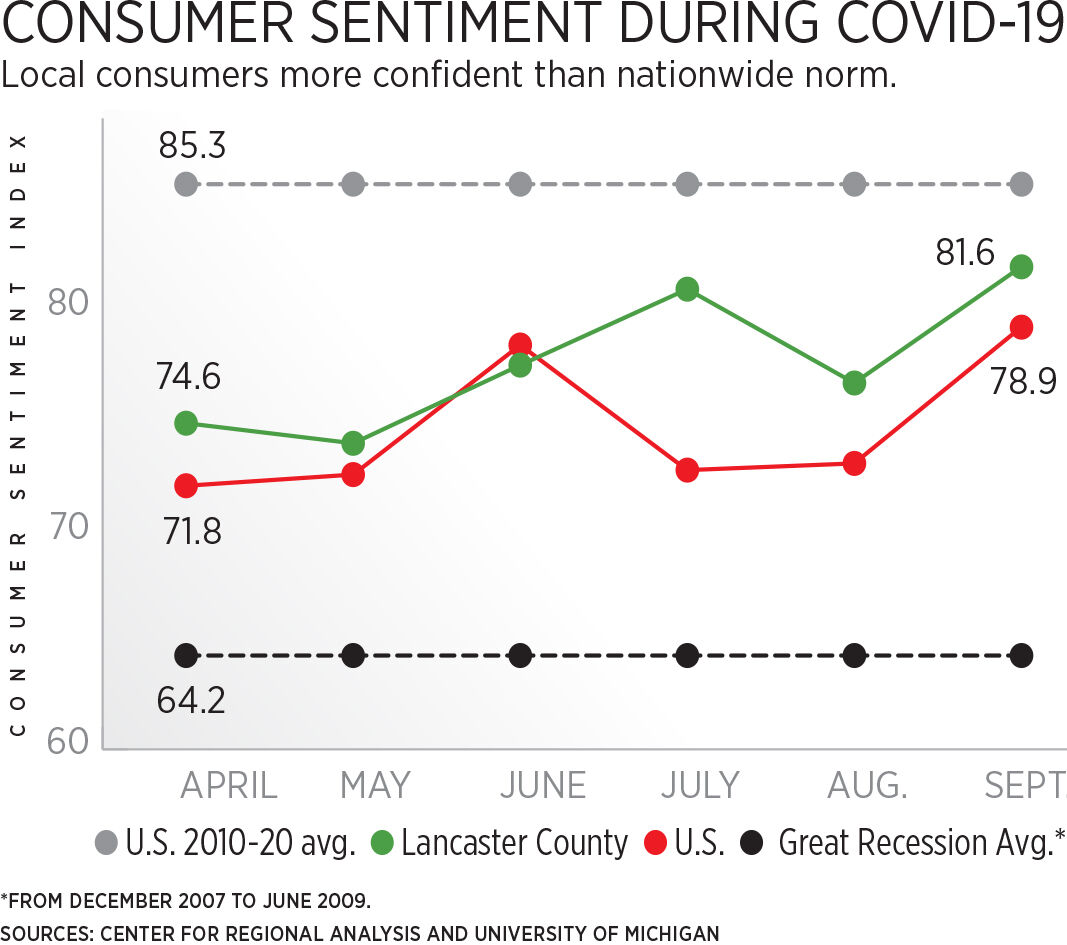 “I’ve seen an uptick since July,” he said, noting that many construction companies have months’ worth of backlogs and many service providers are busy.

Black was among the respondents in a monthly survey of consumer confidence done by the Center for Regional Analysis and LNP Media Group. The latest findings, based on responses given in September, show consumer confidence higher in Lancaster County than nationwide.

This has been the case nearly every month since the pandemic started in what may be an indication of the county’s resilience despite the worst economic downturn since the Great Depression.

The survey, used to generate what’s formally called the Consumer Sentiment Index, was launched in April to track consumer confidence in Lancaster County during the pandemic that began the month before.

Consumer confidence is important to follow because it’s one of the few forward-looking economic indicators. In that sense, it functions like radar does for weather forecasters.

Black, a past president of the Pennsylvania Builders Association and a one-time candidate for the state House, believes that the businesses that have rebounded from the bleak spring have done so because “there’s no limitations (imposed by the state) on what they can do.”

Industries that continue to struggle, such as hotels, restaurants, bars and live event companies, will fare better if state restrictions, imposed to provide the spread of COVID-19, were lifted, he maintained.

“If it opens up, people will come back and support them,” Black said. “There’s still demand.”

Black spoke up in response to a blind invitation to all survey respondents to discuss their views. The survey does not request the name of the respondent, but does allow each respondent to comment, providing additional insight about impressions that have an impact on consumer behavior, including spending.

Looking at the rationale cited by other optimistic respondents in September, many described the pandemic as a minor threat or no threat to their personal financial situation. Many also foresaw a good local economy in the coming 12 months if President Donald Trump is re-elected.

“If Trump wins, times will be good. If the Democrats and Biden win, things will get a lot worse,” said one. “Only if Trump is re-elected,” said another. “Democratic leadership stifles economic growth.”

A few, though, hedged their optimism on the opposite election outcome. “Depends on the election….Go Joe Biden!” “New president,” explained another.

Still others, however, pegged their upbeat outlooks to medical advances, not the Nov. 3 election. “I expect businesses to be able to open up more as new treatments and possibly vaccines become available for COVID-19,” a respondent commented. “A vaccine will change everything,” another said.

In addition to the presidential election and medical advances, a third source of optimism was Lancaster County’s underlying economic vitality.

“Lancaster was strong and growing before the pandemic, which makes it have more resiliency post-pandemic,” said a commenter. Said another, “Creative, industrious businesses.” “Diversity in area businesses,” commented a third respondent.

If knowledge is power, then the Center for Regional Analysis is giving local businesses and public officials some extra strength to help them navigate through the pandemic.

The Lancaster-based center, in partnership with LNP Media Group, publisher of LNP | LancasterOnline, has devised a way to track consumer sentiment, commonly known as consumer confidence, specifically in Lancaster County.

Rare if not unique in the nation for its focus on a single county, this monthly indicator shows that since the pandemic began nationwide in mid-March, consumer confidence here usually has been higher than the national level – and usually keeps rising.

The local Consumer Sentiment Index, based on an online survey of Lancaster County residents that typically draws about 1,000 responses, improved in September to a score of 81.6, up 5 points from the prior month and the highest so far during the pandemic. It also exceeded the national index of 78.9, as calculated by the University of Michigan.

“If people are optimistic, if they think things are going to be picking up, if they’re positive, they’re likely to spend money more readily. So for retailers, restaurants – anybody who’s servicing households – this is a great indicator,” said Naomi Young, the center’s director.

While the September mark and the overall local trend are encouraging, they’re still a far cry from the pre-pandemic times.

The local index didn’t exist at the start of 2020, when the economy was still robust, but the national index back then was 99.8 in January and 101.0 in February, meaning the pandemic has slashed about 20 points off of it.

The percentage of respondents who expect their household finances to be worse a year from now continued to dwindle, falling to only 16% in September. That's down from 27% in April.

Consumer confidence is valuable to measure and track because it’s an omen of future economic growth, as Young noted, making it one of the few forward-looking indicators.

COVID-19 vaccine unlikely this year, but flu season may be mild, experts say

When COVID-19 arrived in mid-March and many states (including Pennsylvania) shut down most businesses to limit its spread, consumer spending immediately tanked, pulling down GDP and giving the nation its first recession since 2009.

That led to the worst unemployment here and nationwide since the Great Depression in the 1930s.

Since hitting rock bottom in April, the economy has been trying to get back on its feet, making some strides as states allow businesses to reopen, albeit with restrictions in many cases.

“When you look at Lancaster, there’s been this optimism, this expectation that things will be better. On a personal level, I think it speaks to Lancaster’s sense of resilience,” Young said.

That resilience, as well as economic development and revitalization efforts in both Lancaster city and county, “all feed into confidence” here, Young said.

The center provides research into economic conditions that are driving the local economy.

With that focus, the center felt “a sense of urgency” at the onset of the COVID-19 outbreak to create “a locally-based, real time metric” for tracking its impact and predicting its direction, according to Young. The result is the local index.

LNP Media Group also distributes the survey via an email blast to 36,000 print and digital subscribers for whom it has email addresses. In addition, it promotes participation in the survey with ads on its website, LancasterOnline, and its Facebook page. About 1,000 usable responses are received per month.

The two local organizations are logical partners, Reynolds explained, because their missions align.

LNP Media Group “is focused on providing news and information for all of Lancaster County, while the center … focuses on information needed by local businesses,” Reynolds said.

She added, “It makes sense for the two organizations to work together to gain insights into the effect of COVID-19 on consumer sentiment.”

Young sees immense value in having research that’s zeroed in on Lancaster County.

“Local economies are unique,” Young said. “They have a social and economic fabric that tends to look very different from the nation’s or even the state’s. Having a Lancaster-specific signal about how people are viewing the local economy – and being able to identify if it is different from the broader, national outlook – can help our local businesses and households plan better.”

The survey is scheduled to run through September 2021.

Pennsylvania is seeing a fall resurgence in COVID-19 cases, but is better prepared than last spring to handle the rise and keep hospitals from…

A newly founded Harrisburg-based union is offering central Pennsylvania restaurant workers, who are independent of a union, a weekly subscript…

The rate of job losses for Lancaster County residents has leveled off in recent weeks, settling within striking distance of the pre-pandemic norm.

When the coronavirus pandemic forced MoviE-town to shut down in March, its doors closed on digital projectors, screens, concessions equipment,…

Lancaster County’s unemployment rate fell for the fifth straight month in September, dipping to 6.1% from August’s 8.0%, the state announced Tuesday.

Nearly eight months into a global pandemic that has delivered unprecedented shocks to the economy and is showing signs of renewed strength, Ri…