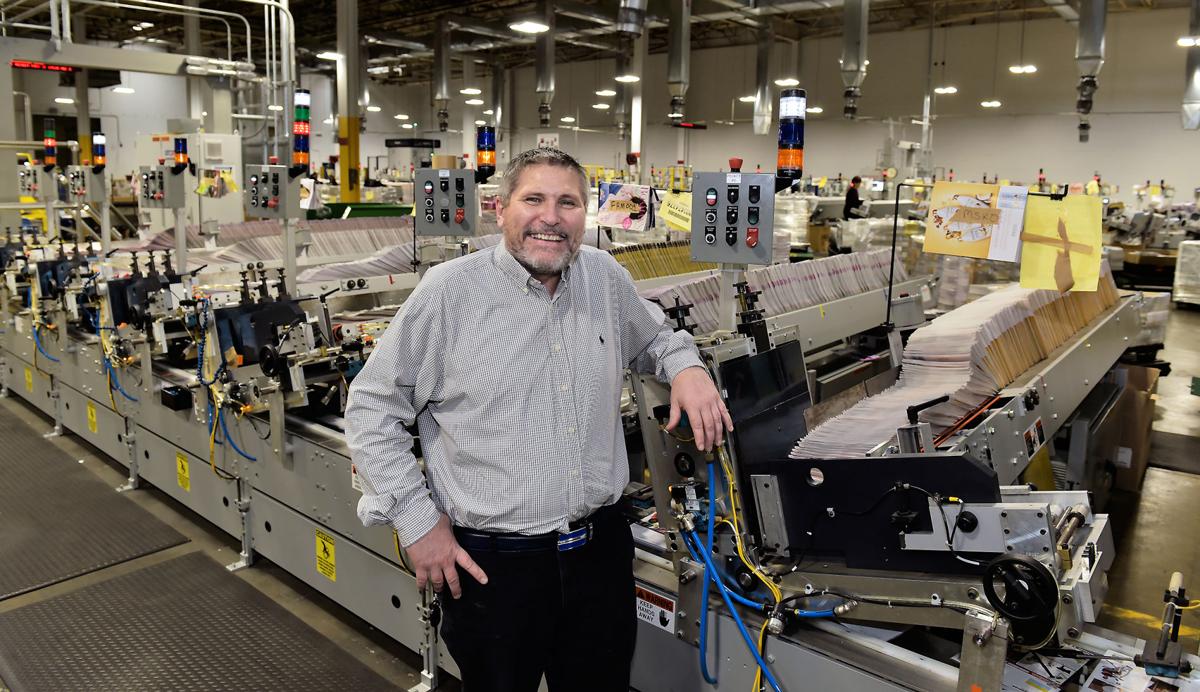 Rick Johnson, vice president of manufacturing at LSC Communications' two Lancaster plants, is pictured in the Harrisburg Pike plant on Thursday, January 9, 2020. The co-mailing equipment behind him sorts up to 42 titles of catalogs and magazines into street-address order for delivery by the U.S. Postal Service. 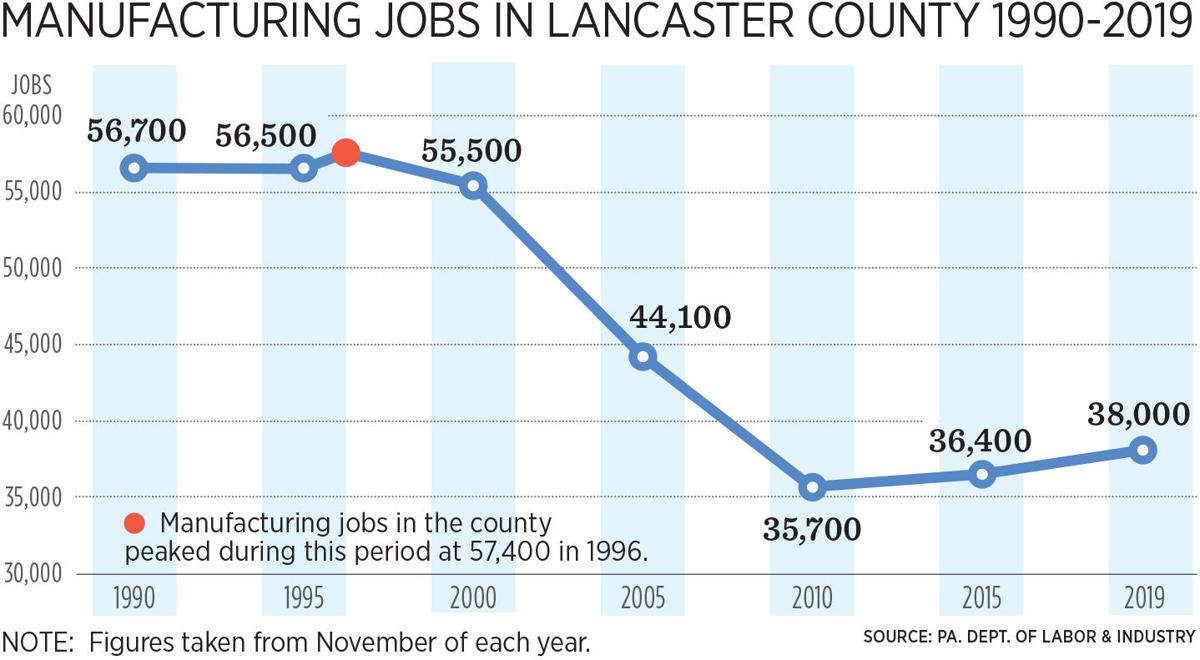 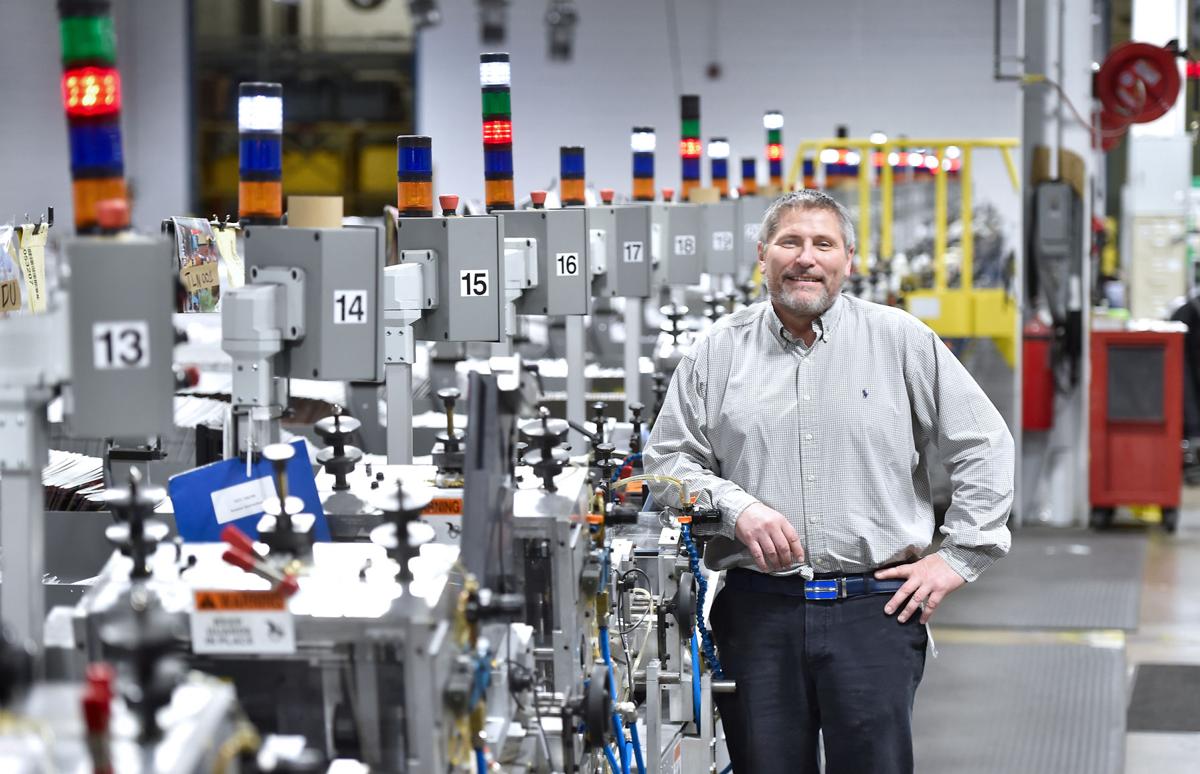 Rick Johnson, vice president of manufacturing at LSC Communications' two Lancaster plants, is pictured in the Harrisburg Pike plant on Thursday, January 9, 2020. The co-mailing equipment besides him sorts up to 42 titles of catalogs and magazines into street-address order for delivery by the U.S. Postal Service. 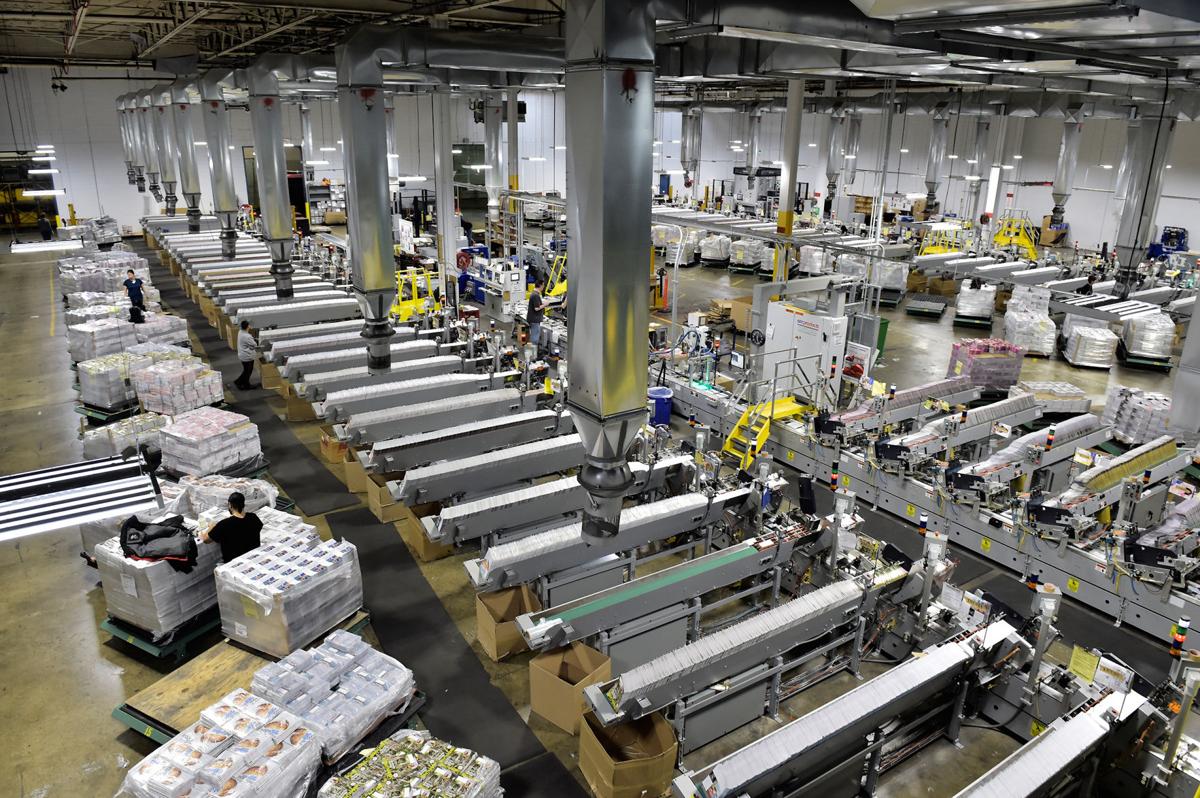 This photo shows co-mailing equipment at the LSC Communications' Harrisburg Pike plant that sorts up to 42 titles of catalogs and magazines into street-address order for delivery by the U.S. Postal Service.

Rick Johnson, vice president of manufacturing at LSC Communications' two Lancaster plants, is pictured in the Harrisburg Pike plant on Thursday, January 9, 2020. The co-mailing equipment behind him sorts up to 42 titles of catalogs and magazines into street-address order for delivery by the U.S. Postal Service.

Rick Johnson, vice president of manufacturing at LSC Communications' two Lancaster plants, is pictured in the Harrisburg Pike plant on Thursday, January 9, 2020. The co-mailing equipment besides him sorts up to 42 titles of catalogs and magazines into street-address order for delivery by the U.S. Postal Service.

This photo shows co-mailing equipment at the LSC Communications' Harrisburg Pike plant that sorts up to 42 titles of catalogs and magazines into street-address order for delivery by the U.S. Postal Service.

How can we replace an older workforce that’s reaching retirement age in droves?

For the owner of two former R.R. Donnelley printing plants here, though, the answer is clear.

LSC Communications wants to bring back the buzz about working at the Greenfield Road and Harrisburg Pike plants, where a combined 1,200 people are employed.

“For many years, Donnelley was seen as an employer of choice in the market,” said Nate Martin, director of talent acquisition and management for the two sites.

“It’s fair to say that over the last decade or so maybe that’s changed as other players came into the market, the market changed and we weren’t always the quickest to adapt,” he said.

“But one of things that’s most important to Tom Quinlan, our CEO, is regaining that status as the employer of choice in Lancaster and really for all of our plants,” Martin said.

Though the goal is simple, getting there will be complex, as LSC has built a far-reaching strategy that improves pay, training and benefits.

LSC hopes the effort will draw 110 to 160 new employees in 2020 and help retain employees already on board.

To accomplish that feat and underscore LSC’s commitment to the Lancaster area, LSC’s two plants here will be spending $5 million in 2020 to:

— Launch a new training program for new hires who have factory experience.

— Starting this spring, separate six-month sessions will be held for workers going into the offset pressroom, gravure pressroom and bindery.

— Accelerate the pace of training for existing employees who want to advance to more challenging jobs.

— And open a walk-in primary-care clinic at the Greenfield Road plant this fall for employees (and, later, for their dependents too) at prices lower than commercial walk-in clinics.

“If you want to do bold things, you have to make bold moves,” Martin said.

With about 200 local employees reaching retirement age in the next five years, LSC is one of many manufacturers here scrambling to cope with the “Silver Tsunami.”

That wave of imminent retirements and a shortage of young workers to replace them is among the most vexing issues facing industry and educators.

Cathy Rychalsky of the Lancaster County Workforce Development Board has noticed what jobseekers find appealing.

“Our newest workers are attracted to companies which support their lifestyle and work preferences,” she said.

“Companies that are adapting to this new group of workers are positioning themselves to be successful in hiring and retaining talent,” said Rychalsky, the board’s executive director.

Higher pay, more benefits and tailored training like LSC is introducing are not the only levers that employers can push, she said.

Other approaches tested, studied or implemented by LSC and other firms include job sharing, transportation help, English as a second language classes and business-education partnerships.

Business-education partnerships are collaborations between employers and schools, Rychalsky explained.

County manufacturers are scrambling for new workers even as the county’s manufacturing workforce has shriveled in recent decades due to automation and outsourcing. The number of county manufacturing jobs has fallen 33% since 1990, state statistics show.

The two LSC plants have been part of Lancaster County’s industrial base for nearly 50 years. Together, they make LSC one of the county’s 10 biggest employers, according to state statistics.

The 216 Greenfield Road plant once housed Schick Inc., which made electric shavers, hair-dryers and other personal care products there until its closing in 1979, idling 390 workers.

Donnelley bought the plant later that year for $7.7 million and started production there of TV Guide and other publications in 1980, according to LNP files.

The 1375 Harrisburg Pike plant was opened in 1972 on the former site of the Lancaster Fairgrounds and twin Brookside swimming pools, next to Long’s Park.

Its main business is printing catalogs. It once printed phone directories but that work was phased out in 2015.

In 2016, Chicago-based Donnelley spun off the plants and their sister locations around the country as part of a new company, LSC, also Chicago-based.

One of LSC’s first local initiatives came the next year, when LSC began filling the void in the Harrisburg Pike plant caused by the phone-book-printing shutdown.

The service is called comailing — sorting 42 catalog and magazine titles, printed by LSC and others, into street-delivery order for the U.S. Postal Service.

The USPS charges less to deliver these sorted materials, generating a savings for the owner of the materials that’s greater than what LSC charges for sorting.

LSC added the initial comailing line here in 2017 and two more in 2018, creating 60 jobs. The cost of the comailing equipment is part of $15 million LSC has invested in the local sites since LSC was formed.

That’s not the only new task being handled by a LSC plant here.

LSC also is bringing “quite a bit of work” here that was previously done by its plants in Lynchburg, Virginia, and Reno, Nevada, Martin said. LSC closed those plants in 2019.

Even without the new work, the local plants already were LSC’s largest producers of magazines and catalogs.

That new work ratchets up the urgency to hit the local plants’ combined hiring goals — 50 to 100 entry-level hires and 60 experienced-craftspeople hires.

The latter category includes people with mechanical skill and machine-operating experience on their resume but no printing-industry work.

“Lancaster is unique in that people stayed with their employers for a long time. And that was great for the Armstrongs and the LSCs and other companies in the area,” Martin said.

“But it (their retirement) is going to mean a pretty big talent gap in the next five to 10 years,” he said. “So we need to develop that next generation of skilled labor.”

Intensifying the challenge is Lancaster County’s unemployment rate, perpetually one of the lowest in the state.

The most recent data, for November, show that continues to be the case.

The jobless rate was 3.5% that month, third lowest among the 18 metropolitan areas in Pennsylvania, according to the state Department of Labor & Industry.

But difficult or not, LSC is committed to adding and retaining employees it needs to keep the plants humming at the highest level.

“They know, if they want the best work done, they want it done in the Lancaster plants — to the extent that we even have customers who demand to have their work done in Lancaster.

“We’ve been really lucky to have such a great, solid and stable workforce in the county,” he continued. “We want to make sure as we look ahead into the next decade that we’re making those investments in the employees in the county who continue to help us do great work.”